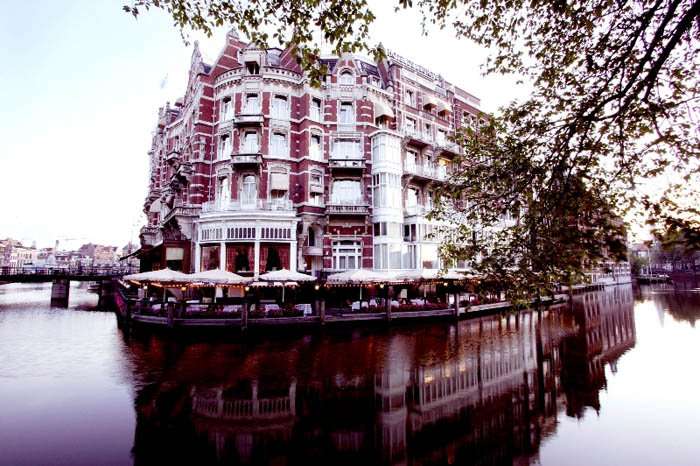 The new Dutch Masters Wing opened March 2010, and is an all-suite annex of 23 uniquely appointed, spacious loft-like quarters each with a different yet exacting replica painting from the nearby Rijksmuseum National Gallery, showcased by oversized “thumbnail” detail paintings (measuring 2m x 3m) in the suite’s living and bedrooms. The city’s top local architect/interior designer Cees Dam, whose zeal for sustainable development is revealed via his curriculum vitae of high-profile projects throughout the Netherlands, transformed the adjacent Theodoor Gilissen Bank into a distinguished haven for residents and travelers alike. The impeccable details of each suite are exemplified by the bold and vintage colors of the Dutch Masters paintings, fusing verve and panache with hints of history.

Guest Room Types
Within the both the new Dutch Masters Wing and the renovated main Rondeel building, guests have 7 room style options available to meet the different needs of discerning travelers. More is more: the guest floors of the main building were redesigned to allocate greater space within each room, expanding in size from a luxurious bath with bedroom to now include living quarters and a “mini” private office area with a desk. The Dutch Masters Wing has four suite styles: a few – like the Provocateur – are set-up similarly to a loft apartment. Others are reminiscent of a modern piéd a terre, with sliding glass doors that separate the bedroom, living room and entry foyer for privacy; the bathroom has traditional sliding doors that give separate access from the foyer and bedroom for discretion.

Guestroom Amenities
Each beautifully appointed suite offers modern guest amenities designed to evoke a sense of place and comfort in an atmosphere of relaxed sophistication including:

Overview
Originally built in 1896, hotel De L’Europe is located in the heart of Amsterdam opposite Munt Tower, overlooking the Amstel River. Synonymous with refined taste and quiet elegance, De L’Europe is often referred to as the other “Royal Palace of Amsterdam,” continuing to attract the city’s power menagerie and an assortment of the world’s most celebrated names. Fusing its sophisticated ambience and gracious service, the hotel’s distinctive décor also sets it apart, surrounding visitors with original Dutch Masters paintings from the private collection of Alfred “Freddy” Heineken for the quintessential Amsterdam experience.

Location
Centrally located on the beautiful Amstel River, Hotel De L’Europe is convenient to several of the world’s most heralded museums and Amsterdam’s points of interest. An easy 25-minute drive from Amsterdam’s Schiphol International Airport or a six-minute train ride from Central Station, the hotel’s convenient location makes it a top destination for discerning travelers. Amsterdam is one of the greatest small cities in the world: its rich culture, history and world-class attractions combine with the vibrancy, tolerance and diversity of its citizens, offering something unique to every visitor. Museums are the main tourist attraction in Amsterdam: while most visitors seek out the world renowned Rijksmuseum, Van Gogh and Stedelijk Museums, there are nearly fifty choices for art aficionados to appreciate.

History
In the 17th century, Amsterdam was the center of world economy, where modern architecture developed organically between facades of historical buildings. Hotel De L’Europe’s present-day location was originally part of a defense fortress built in 1492 to protect the city; one of its towers was named Rondeel. The fort was demolished in 1633, when the inn “Het Rondeel” was built. More than 200 years later, from 1895-6, architect Willem Hamer Jr. began remodeling this mountain stone and red brick building in Renaissance style, which is a now city-designated landmark.  Long considered an oasis of calm in the midst of Amsterdam’s buzzing city center, the original building was temporarily closed in 2010 for extensive renovations that will fuse the hotel’s timeless architectural elements with 21st-century comforts and forward design in each of the 111 guest rooms and signature suites upon its re-opening Spring 2011.
The legacy of discreet, old-world style and service remains.

• Heated Indoor Pool: The 9 meter pool brings swimmers eye-level with views of the Amstel River. Guests can relax with a refreshing libation from the adjacent juice bar on a lounge chair that faces the afternoon sun. Steam/sauna facilities in his and hers locker rooms soothe the soul.
• The Fitness Center: An exercise enthusiast can enjoy a range of activities including a selection of free weights and stationary cardio machines.
• Business Center: Services include high speed internet and administrative assistance with copying, laminating, faxing, and mailing parcels.
• Spa: Opening Fall 2011

World-Class Restaurants and Bars
Executive Chef Richard van Oostenbrugge is responsible for each of the restaurants, lounges, and seven private dining rooms at hotel De L’Europe; Stephan van Tilburg is the hotel’s director of food and beverage. A hub of haute cuisine, the myriad dining options offer something special for demanding gourmands any time day or night. As a team they oversee:

• Bord’Eau: The jewel of De L’Europe’s culinary crown. Twenty-first century fine dining in an exquisite salon-like setting. This intimate room with vistas of the Amstel suggests a world of high style, enveloping diners in a warm glow as detailed service pairs with contemporary French fare with Dutch flair and outstanding selections from Head Sommelier Dannis Apeldoorn’s Les Caves De L’Europe to create an enchanting and memorable evening to be savored for years to come. (opening February 2011)
• Freddy’s Bar: Amsterdam’s traditional brown watering hole for the local elite, and noted for the city’s best Bloody Mary, Freddy’s is named for Alfred Heineken who entertained his guests here, and donated several Dutch Masters paintings for all who enter to enjoy. Freddy’s is often touted by reviewers as one of the city’s best bars if not its most iconic, where society and power players gather in woody banquettes, club chairs and lavishly cozy furnishings. A jazz pianist performs in the background keeping guests entertained while they sip perfectly mixed cocktails and wines from an impressive list, and nibble on delicious bar snacks. Freddy’s – original carved wood bar and all – is temporarily housed in the hotel’s new Dutch Masters Wing; a freshly refurbished Freddy’s returns to the original building February 2011.
• Hoofdstad Brasserie: This open-kitchen brasserie serves “Amsterdam-accented” modern continental cuisine amidst atmospheric flare and outstanding service. Open throughout the day, guests can view its chefs in action while sipping some of the world’s great wine finds by the glass. Temporarily located in the hotel’s adjacent new Dutch Masters Wing, a newly renovated Hoofdstad Brasserie returns to its original building February 2011.

• Promenade: A see and be seen sophisticated scene set alongside the hotel’s grand passageway where old-world charm co-exists with modern classic design in this quiet oasis of the bustling city. The Promenade serves the city’s most comprehensive list of old- and new-world wines by the glass, perfectly mixed cocktails, new afternoon tea service, a light menu and snacks. It’s also the perfect spot for a night cap after enjoying all the city’s cultural offerings. (opening February 2011)

Memberships & Partnerships
As a sophisticated hotel synonymous with refined elegance, De L’Europe boasts alliances with like-minded brands and memberships with some of the world’s most respected hospitality organizations including:
• Leading Hotels of the World
• Virtuoso
• American Express Fine Hotels and Resorts
• Alliance Gastronomic