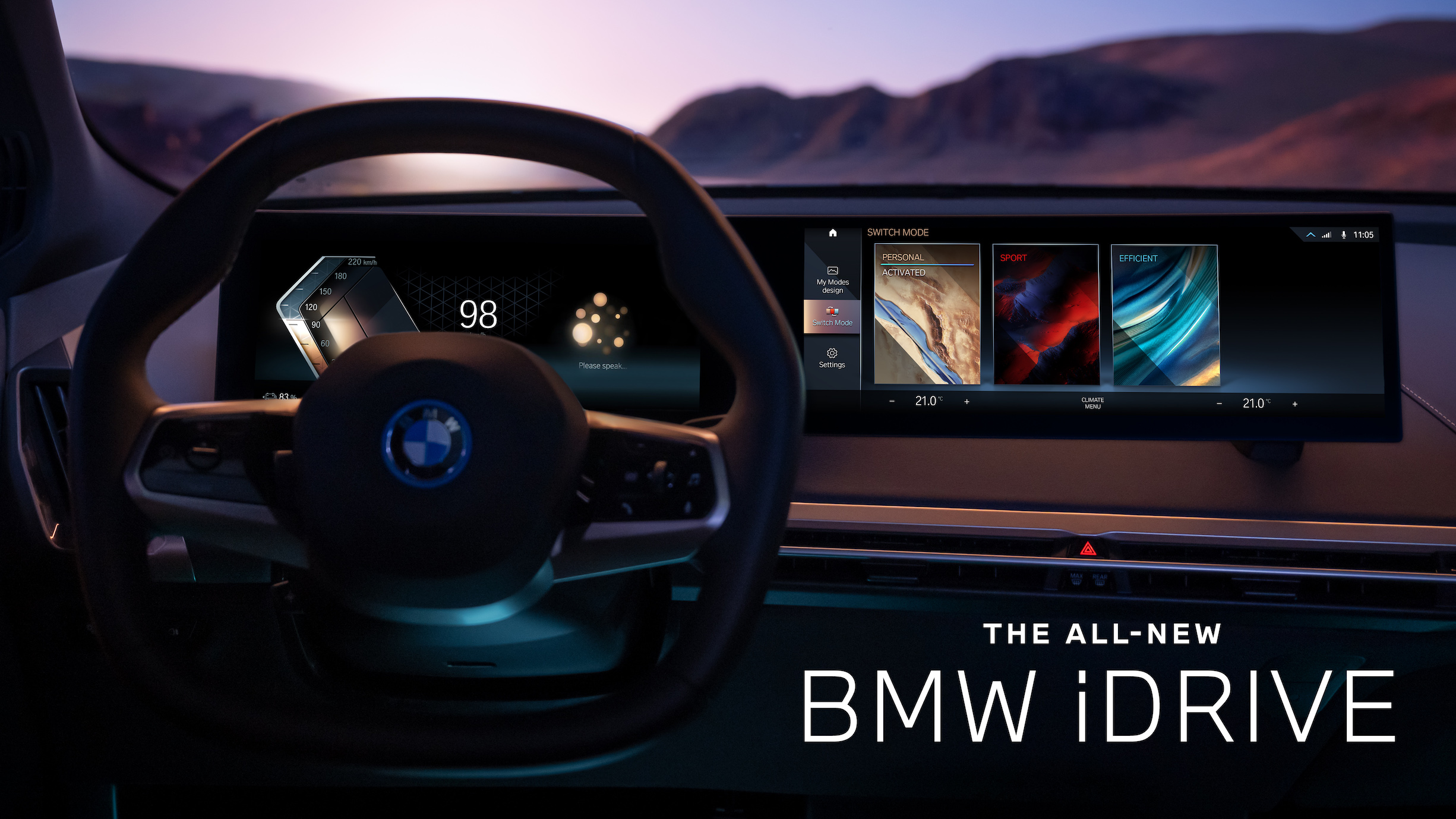 Debuting in the upcoming iX and i4, the newest iteration of BMW’s driver-passenger-vehicle interface acts as a digital, intelligent and proactive partner during the time you spend inside your vehicle. Advances have been made all-around to deliver a more natural interactive and holistic user experience between the driver and their BMW. Underpinning the unique user experience are a new generation of displays, controls, software, and extremely powerful connectivity and data processing.
iDrive 8 is designed with a focus on voice and dialogue-based interaction using natural language and touch operation via the BMW Curved Display. The BMW Intelligent Personal Assistant is the main way to interact with your BMW using voice, adjusting to the driver’s routines as well as to what is happening around the vehicle. A new customer experience welcomes the driver and invites them into their BMW with a choreographed routine. It all starts with illumination of the area around the vehicle and its interior before the doors unlock automatically and the cabin is prepared for the occupants. During the journey, the new My Modes use an interplay of various functions set the mood using a combination of vehicle functions and the interior ambience lighting.
The new BMW iDrive 8 is constantly processing large amounts of not only self-generated data, but also data collected from the BMW Group vehicle fleet to implement the driver’s wishes in a context-related way. Paving the way for greater personalization is the BMW ID. This system recognizes repetitive situations, learns from them and provides suggestions on how functions can be activated accordingly. Remote Software Upgrade allows the new BMW iDrive to benefit from regular over-the-air improvements, integrate additional functions and stay up to date.
The integration of third-party apps is more comprehensive than ever. The most important applications in each individual market around the world can be imported seamlessly into the vehicle’s operating system. The display and operation of these apps will be familiar to customers from their smartphones.
History of BMW iDrive
The arrival of iDrive 20 years ago saw BMW ushering in a new era of in-car operating technology. Keen to get a grip on the constantly expanding array of functions in vehicle interiors, in 2001 BMW introduced a paradigm shift in the then new BMW 7 Series – one which enabled the inexorable march of buttons and controls throughout the cockpit to be checked and reduced. In their place came a color screen in the center of the instrument panel (the control display) and a rotary dial on the center console (the iDrive Controller). This multifunctional system allowed drivers to control a large number of vehicle settings, entertainment, navigation and telecommunications functions with a single operating tool. Within the space of a few years, iDrive effectively became the new industry standard and proved to be extremely future proof.
20 years later, the developers and designers focusing on user interaction and on the user experience have faced a new set of challenges – a constant stream of new functions is joining the fray, functions are gaining in complexity all the time, and operating them needs to become easier and more natural. The BMW cars of today are intelligent and able to build a detailed picture of their surroundings and make sense of it using modern sensors and data processing. They are permanently connected to the BMW Cloud and therefore benefit from the combined computing power, long-term and real-time data, machine learning, and swarm intelligence generated by the 14 million connected BMW vehicles out on the roads. 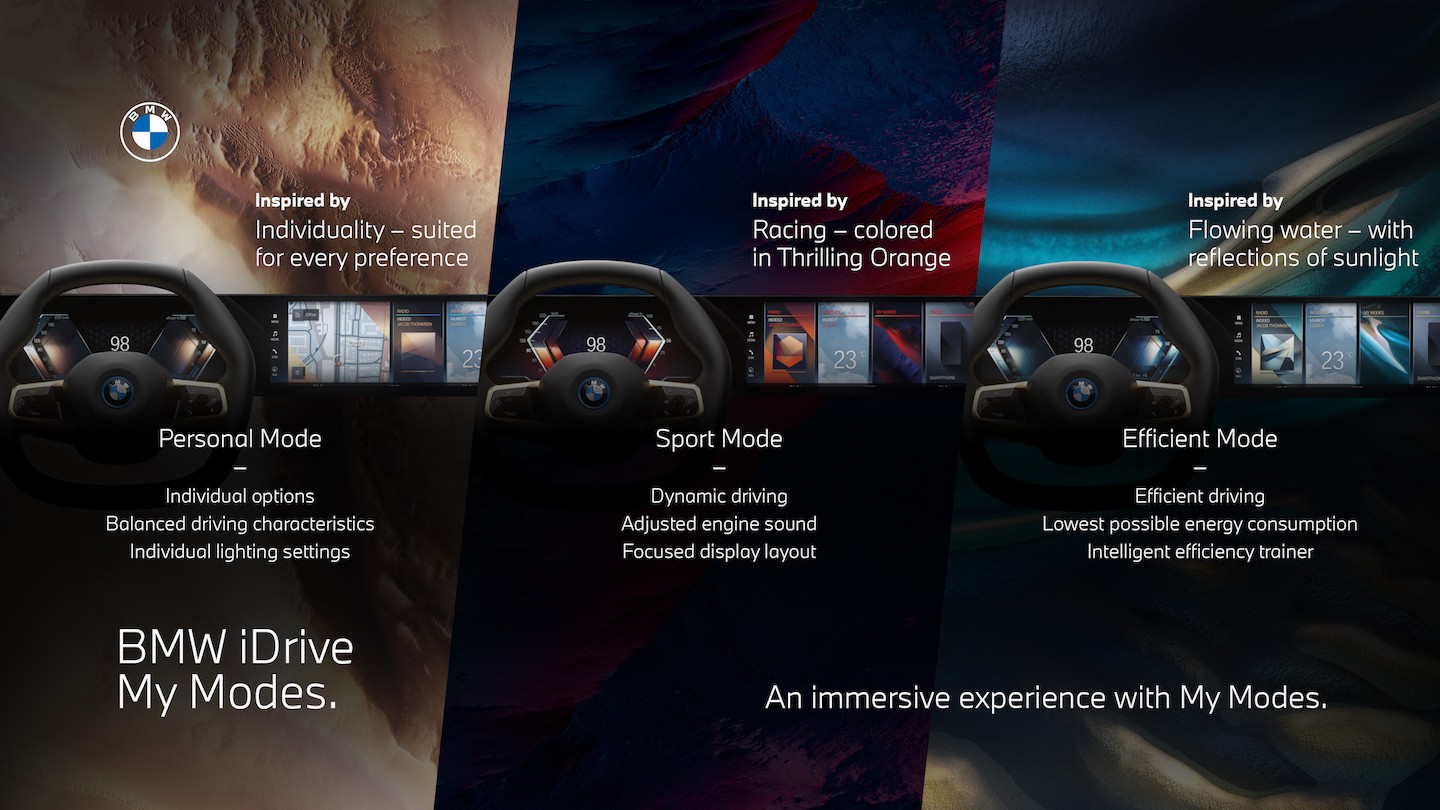 The developers of the new BMW iDrive have carried over the car’s expanded technical abilities into an all-embracing user experience distinguished by its intelligent symbiosis of hardware and software. Looking ahead, the car will become an increasingly smart and automated device which maintains a natural dialogue with the user. This interaction will involve the user simply making iDrive aware of their wishes and requests, while the system learns how its user behaves, comes up with suggestions in real time (based on an extensive pool of detailed knowledge) and actively proposes them to the driver – who then only needs to confirm.
What began with the introduction of a rotary dial and a digital display is now an all-encompassing, intelligent, multi-sensory experience tailored to the user. That is what the new BMW iDrive 8 represents. It brings about another paradigm shift – this time to a natural dialogue between the user and their vehicle: more intuitive, personal, but also engaging.
Design and operating concept
The first BMW vehicle to receive the new iDrive 8 system will be the iX. The all-electric Sports Activity Vehicle was developed from the inside out to deliver an engaging experience in performance, technology and inside the cabin space. Advances made in the field of digital design are reflected in the appearance of the user interface which fulfils its functional role in an extremely clear and very aesthetically pleasing way. This artistic approach uses graphics to enhance the interaction between driver and vehicle.
A prime example of this form is the use of a minimalist design language in both the exterior and interior of the car, which is carried over in the reduced design of the digital elements of the BMW iDrive. For example, the clear structures of the surfaces for the interior door trim – dominated by diagonal lines – are reflected in the graphical user interface of the BMW Curved Display. This creates an uninterrupted connection between the user interface design and the vehicle design.
The most distinctive new addition on board is the BMW Curved Display, which groups together the slim, non-reflective glass, high-resolution 200 ppi 12.3-inch information display and 14.9-inch control display. This curved screen offers a futuristic interpretation of the traditional BMW driver orientated cockpit design and gives it the appearance of almost floating. The BMW Curved Display is angled towards the driver, making the intuitive touch control very straightforward. The front passenger however still retains a full view of the displays and can operate the system by touch control with ease.
The BMW Head-Up Display features optimized graphics and additional design content to enhance the information provided to the driver. It is now integrated flush into the surface of the instrument panel with no bezel surround, and therefore fits invisibly into the minimalistic interior design.
The “Act, Locate and Inform” principle, which ensures information is distributed clearly, takes the BMW driver-orientated cockpit design to a new level. Pre-filtering ensures that only information relevant to the driving situation is presented to the driver – and always shown where they can absorb it as quickly and easily as possible. This is an example of the BMW Group’s “Eyes on the road – Hands on the wheel” design principle at work. The driver is shown certain instructions in the Head-Up Display (Act). If the route guidance function of the navigation system is activated, this is where they will see recommendations on which lane to be in or the distance to the next exit or turn. Meanwhile, a detailed map in the display behind the steering wheel offers location-finding information (Locate). And the large map view in the right-hand area of the BMW Curved Display provides the driver and front passenger with an overall overview of their trip. (Inform).
In order to provide an improved interactive experience with a more technologically sophisticated and complex product such as the BMW iX, voice control and touch functions of the BMW Curved Display are prioritized. The number of buttons and switches has been reduced by almost half compared to current vehicles. At the same time, control clusters for relevant and frequently used basic functions are retained where customers expect to find them.
The control panels on the center console and instrument panel have an all-new minimalist design. The familiar iDrive Controller is the central control element. The Touch Controller is designed in an extremely smart glass-effect finish for the BMW iX. The color and materials used for the center console give it a very sophisticated appearance. The Controller is enclosed by a panel with a High-gloss Black frame, a glass-effect surface and white backlit buttons. On the center console, the control surface with active haptic inputs subdivided by feeler bars is used to select the iDrive menus, My Modes and other functions. The Controller, the rocker switch for gear selection, the audio roller control and the seat adjustment buttons can also be specified in an optional polished crystal finish. 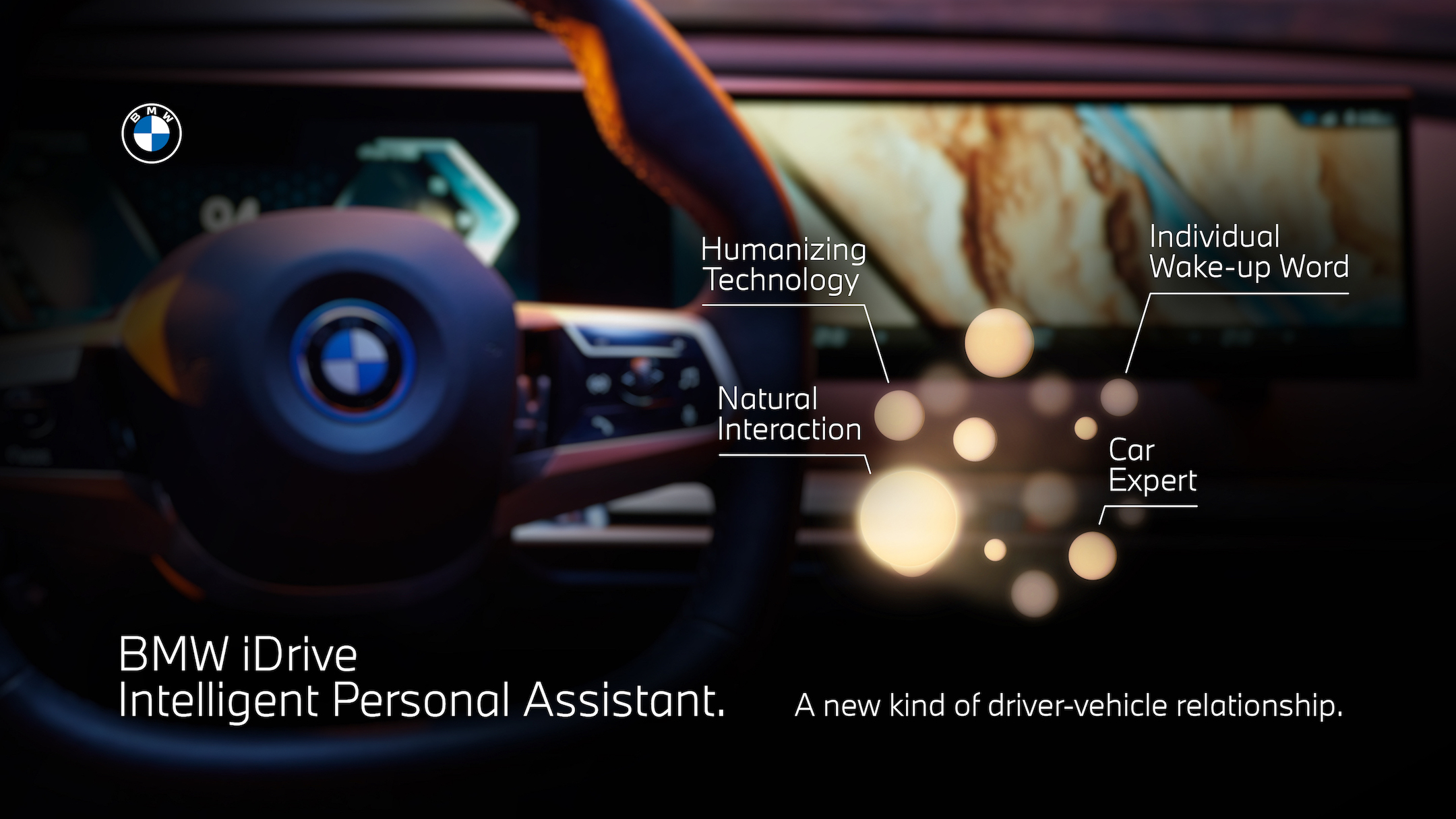 BMW Digital Key Plus with ultra-wideband radio technology
BMW has been pioneering the use of smartphones as digital vehicle keys since 2018, during which time it has been relentlessly driving the development of the BMW Digital Key. The upcoming BMW Digital Key Plus version is based on the ultra-wideband (UWB) technology already integrated into the vehicle and, for example, the iPhone’s U1 chip. UWB is a digital radio technology for short-range high-bandwidth applications that offers exceptionally precise location identification combined with maximum security. The high precision of UWB has the additional benefit of ruling out the possibility of relay attacks, where the radio signal is disrupted or intercepted.
Apple and the BMW Group have been working closely together with the Car Connectivity Consortium (CCC) to develop the Digital Key Release 3.0 specification for UWB, which will serve as a global standard for the automotive industry. The BMW Digital Key Plus will be first introduced for the all-electric BMW iX. The new generation of remote-control keys will likewise feature UWB technology, resulting in the same high standards of convenience and security.

More apps, greater diversity: optimized third-party integration
The new-generation BMW iDrive 8’s higher degree of flexibility makes in-car use of third-party apps even simpler and more convenient in the future. BMW iDrive 8 features full integration of Apple CarPlay and Android Auto. The control display’s large screen clearly presents all available apps in the system’s menu. The user’s favorite apps can be launched quickly and easily either via the main menu or the toolbar. The increased integration of app functions into the information display and even the BMW Head-Up Display also results in seamless transition throughout the screen grouping. And music streaming and communications apps are now integrated within BMW iDrive 8. They are displayed as original sources in the main menu, enabling customers to make full use of their apps’ functions.
Centralized network architecture and Gigabit Ethernet
A multitude of extremely powerful sensors – coupled with over 30 antennae and the on-board network’s highly centralized architecture, in which complex software functions are concentrated in a handful of high-performance central computers – convert the new generation of vehicles (starting with the BMW iX) into digital top performers on wheels. The technology toolkit being deployed for the first time paves the way for new, highly complex vehicle functions and redefines standards for connectivity, data processing and intelligence.
When all vehicle functions are active and operating at full load, data for processing flows through the car’s network at a rate of up to 30 Gbit per second, meaning the volume is between ten and 20 times higher than in the current model generation. This is all made possible by the first ever use of Gigabit Ethernet technology in a BMW.
The growth in the volume of data is largely down to the vehicle’s improved sensor technology comprising over 40 individual sensors, needed by driving assistance systems. Consequently, the data needs to be processed and evaluated instantaneously so that the functions can react in real time. To give an idea of its capabilities, the network aboard the BMW iX can transmit the data stored on an entire DVD in a little over a second.

LAND ROVER LAUNCHES ‘DEFENDER ABOVE & BEYOND SERVICE AWARDS’ TO HONOR U.S. ORGANIZATIONS MAKING A DIFFERENCE IN THEIR COMMUNITY