Maranello – The 599 GTO, an extreme V12 berlinetta developed to a specific performance-oriented brief, is in fact, Ferrari’s  fastest ever road car.  It is an exclusive limited edition special which, in true Ferrari tradition, is a completely new concept, albeit inspired by a production car. Actually, the 599 GTO is based on the 599XX, the advanced experimental track car, and can be considered almost a road-going version.

The 599 GTO is reserved for just 599 clients who seek the maximum expression of high-performance driving. The 599 GTO benefits directly from the technological transfer from racing and set a record lap time at Fiorano in 1’24”.

The Fiorano lap time provides just one indication of the potential of this car. Just as significant are the technical specifications – 670 hp in a 1495kg car represents a weight-to-power ratio of just 2.23 kg/hp, and ensures a 0-100 km/h acceleration time of just 3.35” as well as a top speed of over 335 km/h.

Fundamental to the GTO’s performance is the innovative approach to chassis development which, for the first time on a production car, saw the integration between a handling set-up tuned for a level of responsiveness that is close to the limit and highly sophisticated electronic controls. The result is the almost complete absence of understeer and a truly communicative chassis. 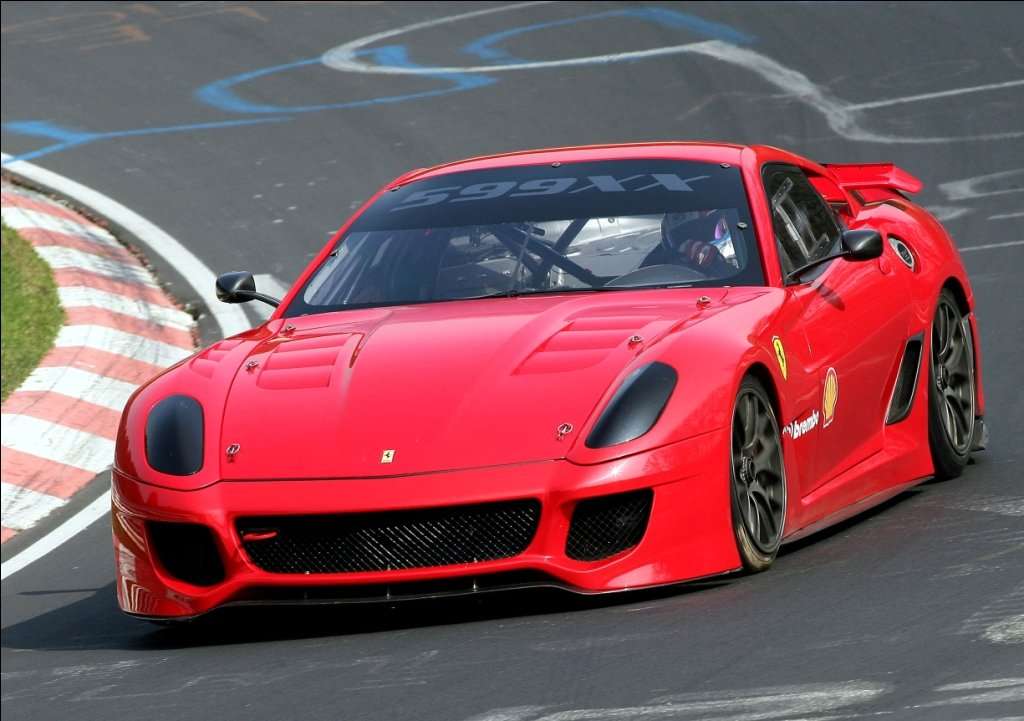 As is Ferrari’s policy, every new Ferrari features new solutions for a road car. Thus the 599 GTO is equipped with the latest, second-generation carbon-ceramic brakes which are lighter and offer better performance, new aerodynamic innovations, such as the wheel doughnuts which increase aerodynamic efficiency as well as improve brake cooling, and the Supersport tires developed by Michelin include a wider front tire for greater road-holding. The driver-car interface is also new with the adoption of the Virtual Race Engineer (VRE) which provides the driver with instantaneous information on performance.

The 599 GTO’s more aggressive character is also apparent in a number of styling elements that recall the 599XX and from the powerful sound of the V12.

The GTO (Gran Turismo Omologata) moniker instantly calls to mind two Ferraris that have entered the collective imagination as symbols of performance. After the 1962 250 GTO, which swept the boards in GT racing categories in the 1960s and is now a highly prized collector’s car, came the iconic 1984 GTO, which basically invented the entire modern supercar genre.

The web special includes photos, videos and interviews on the new car, while an exclusive preview for a small number of Ferrari clients will be held on April 14th at the Military Academy in Modena. The public debut of the 599 GTO will instead be at the Beijing International Motor Show at the end of April.

The 599 GTO’s engine is directly derived from the 599XX unit implementing, however, the necessary modifications for road-going homologation. It thus complies with Euro 5 and LEV 2 standards. The 5999 cc 65-degree V12 engine punches out 670 CV at 8250 rpm with maximum torque of 620 Nm at 6500 rpm and there is a smooth, constant rush of power all the way to the redline with no loss of flexibility even at medium and low revs. This result was obtained by working on the fluid-dynamics and components to reduce internal friction and by adopting, amongst other things, the 599XX’s redesigned crankshaft. The car also has a racing-type intake system with a new manifold with diffuser-type intake geometry and short inlet tracts designed to improve power delivery at high revs and reduce losses. To maximize volumetric efficiency per cylinder, a connection between the two plenums at the front compensates for variations in the volume. This is how the engineers managed to achieve maximum performance at high engine speeds. The engine sound inside the car is carefully controlled to balance the intake sound with the exhaust, which features a 599XX-derived 6-into-1 manifold. The 599 GTO features the same, lower 60 ms shift times and the possibility to make multiple downshifts as on the 599XX.

One of the most significant innovations on the 599 GTO is the close correlation between the chassis set-up, which is close to the handling limit, and the input from the electronic controls which are developed to increase overall levels of performance. Since the very earliest states of the two cars’ development, Maranello’s engineers worked to ensure that these two areas of the car would be seamlessly integrated thus pushing responsiveness to the limit. The result is, of course, superlative driving involvement as well as faster lap times. Apart from new springs and a stiffer rear anti-roll bar, the car also features a second generation magnetorheological suspension control system (SCM2). The suspension works in tandem with the VDC (Vehicle Dynamic Control) and latest-generation F1-Trac traction control. This makes the car extremely responsive to driver inputs – thanks in part to the adoption of a very direct steering ratio – but also very stable under braking, sharper on turn-in, more precise in cornering and quicker out of corners. 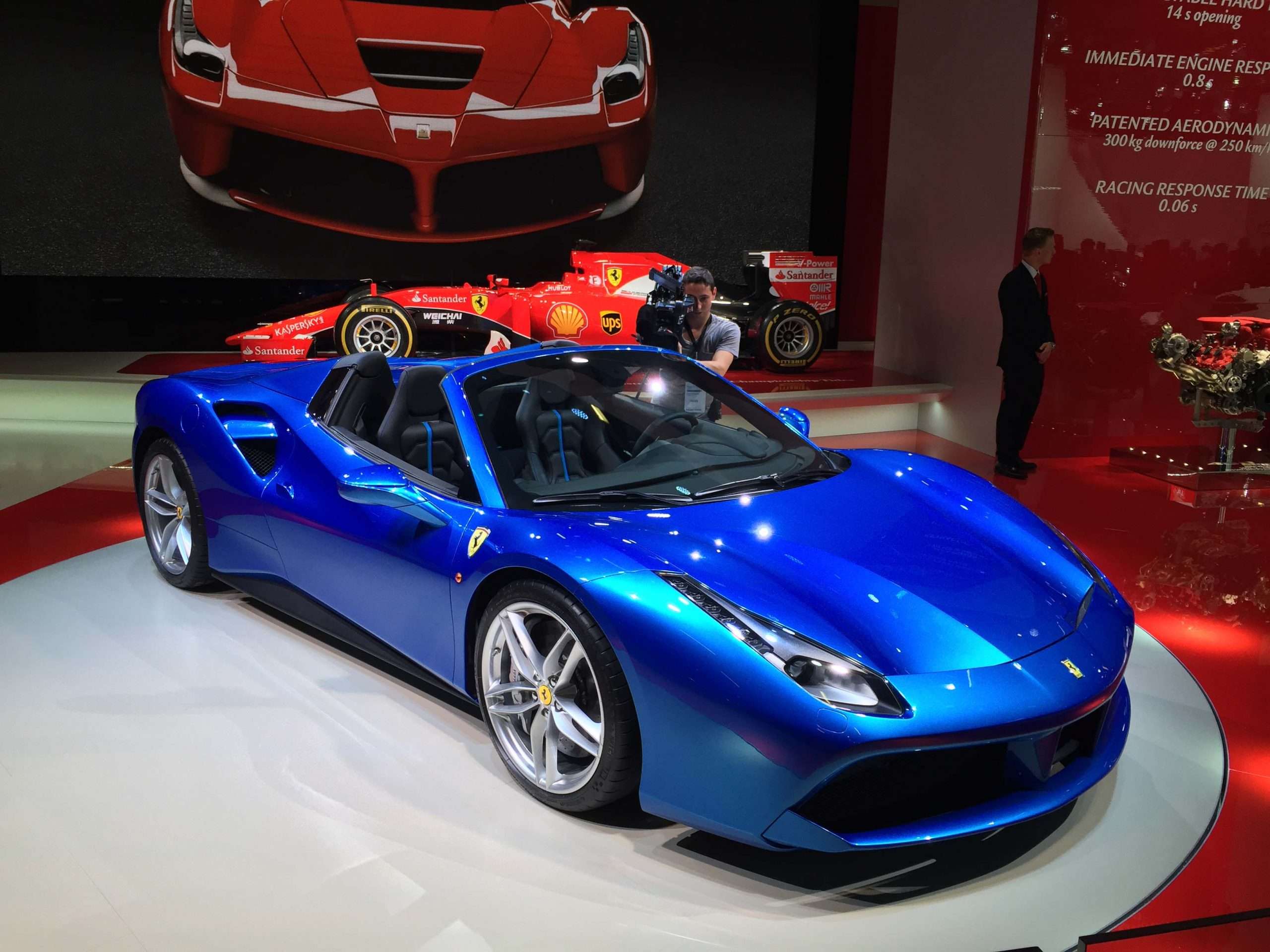 The 599 GTO inherits much of the development work – using the same principles as employed in F1 – that went into making the 599XX such an extreme performance car. Reducing weight was a vital objective and the result was the widespread use of composites and components manufactured with technologies more akin to racing specifications. The areas involved include the bodywork and greenhouse (with thinner gauge aluminum and thinner glass), the brakes, transmission and exhaust system. The result is a dry weight of 1495 kg and a weight-to-power ratio of just 2.23 kg/hp, a very significant figure that underlines the GTO’s performance potential.

The 599 GTO’s aerodynamics have benefited significantly from Ferrari engineers’ experience in F1 and with the 599XX which allowed downforce to be greatly increased without impacting on drag. Thanks to solutions transferred from the track car to the road-going version, the GTO generates downforce of 144 kg at 200 km/h. The entire car was honed, including the front, the sides, the flat underbody and cooling flows. In the latter instance, the GTO can count on improved ducting to the brake discs and pads, and the adoption of wheel doughnuts – a disc positioned outside the brake disc that ensure that hot air exiting the wheelarch stays as close to the body of the car as possible to reduce drag. Work on the nose of the car was aimed at reducing the width of the wake generated by the front and thus reduce drag. The front spoiler incorporates a separate lower wing that increases downforce at the front of the car and increases the flow of cooling air to the oil radiator. On the flanks there’s a new sill design with a more pronounced leading edge that improves the efficiency of the central section of the underbody. The underbody itself incorporates a new, lower front section with diffusers ahead of the front wheels to optimize downforce, and a new double-curve rear diffuser. 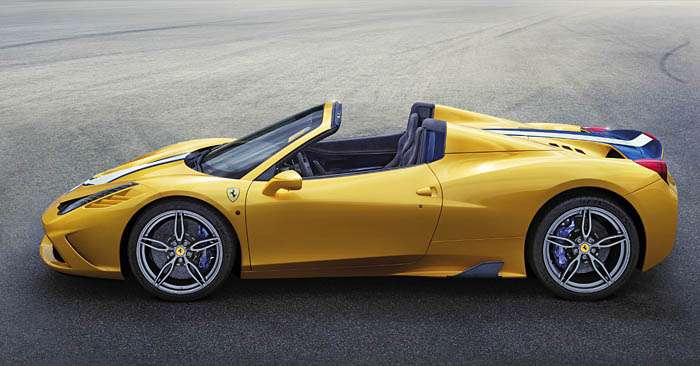 Here the difference in size between the front and rear tires has been changed. The GTO’s front tires are now 285/30 on a 9.5’’ channel with 315/35 on an 11.5’’ channel at the rear. The 599 GTO has 20’’ rims. Roll rigidity is greater at the rear to minimize understeer. These solutions guarantee improved lateral grip and quicker turn in.

The new CCM2 braking system is lighter and even more consistent in high performance situations. Its consistent coefficient of attrition meant that the ABS could be calibrated to a particularly high performance level, further reducing lap times, thanks to improved deceleration and shorter stopping distances. In fact, the 599 GTO boasts an excellent 100 to 0 km/h braking distance of just 32.5 meters. As well as their role in improving aerodynamics, the Formula 1-derived wheel doughnuts also improve braking efficiency by optimizing brake cooling.

The car-driver interface was designed to maximize car and driver performance with a layout of the main commands that ensures absolute efficiency and minimum distraction. The Racing manettino also puts the emphasis firmly on sporty, track-specific driving settings by offering the driver full choice with regard to the electronic control parameters. The ICE position on the 599 GTB Fiorano has been replaced by CT-Off (traction control off). The GTO is also fitted with bespoke, longer carbon-fiber F1 paddles for easier use in high-speed driving. In addition the GTO also features the Virtual Race Engineer, a system that monitors the status of the car and gives the driver immediate visibility of vehicle performance.