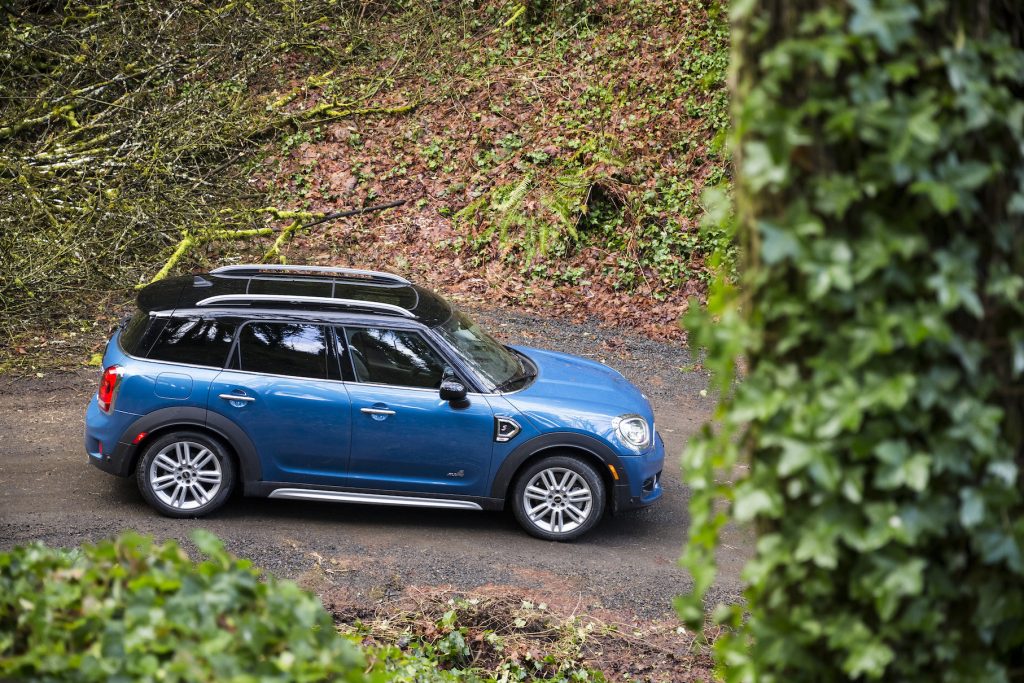 The burgeoning love affair with the MINI brand continues with enthusiasm as more hits are released and prior generations are updated with powerful impacts on consumer perception. MINI owners are proud and dedicated and marvel at the warmth, friendliness and brilliance their vehicles offer during every drive. Never do you tire of the monotony of the same old thing because never does your pride and joy ever seem to grow old. And now there is more to rejoice with the introduction of the 2017 MINI Cooper Countryman, the biggest and most versatile MINI to date.

To enjoy the adventurous nature and attributes of the new Countryman we headed to the raw Pacific Northwest lands of Oregon to mesh the outdoorsman environment with the authenticity of the vehicle. From fresh waterfalls, to snow laden trails, to uphill trots to reach our campgrounds the MINI displayed its versatile impact in full force. Especially since we were blessed with the S Countryman ALL4 which is their all-wheel drive technology. A few times I thought a Subaru would be better suited until the Countryman disproved my theory. I like the idea of leaving the pavement to hit the woods in a MINI. 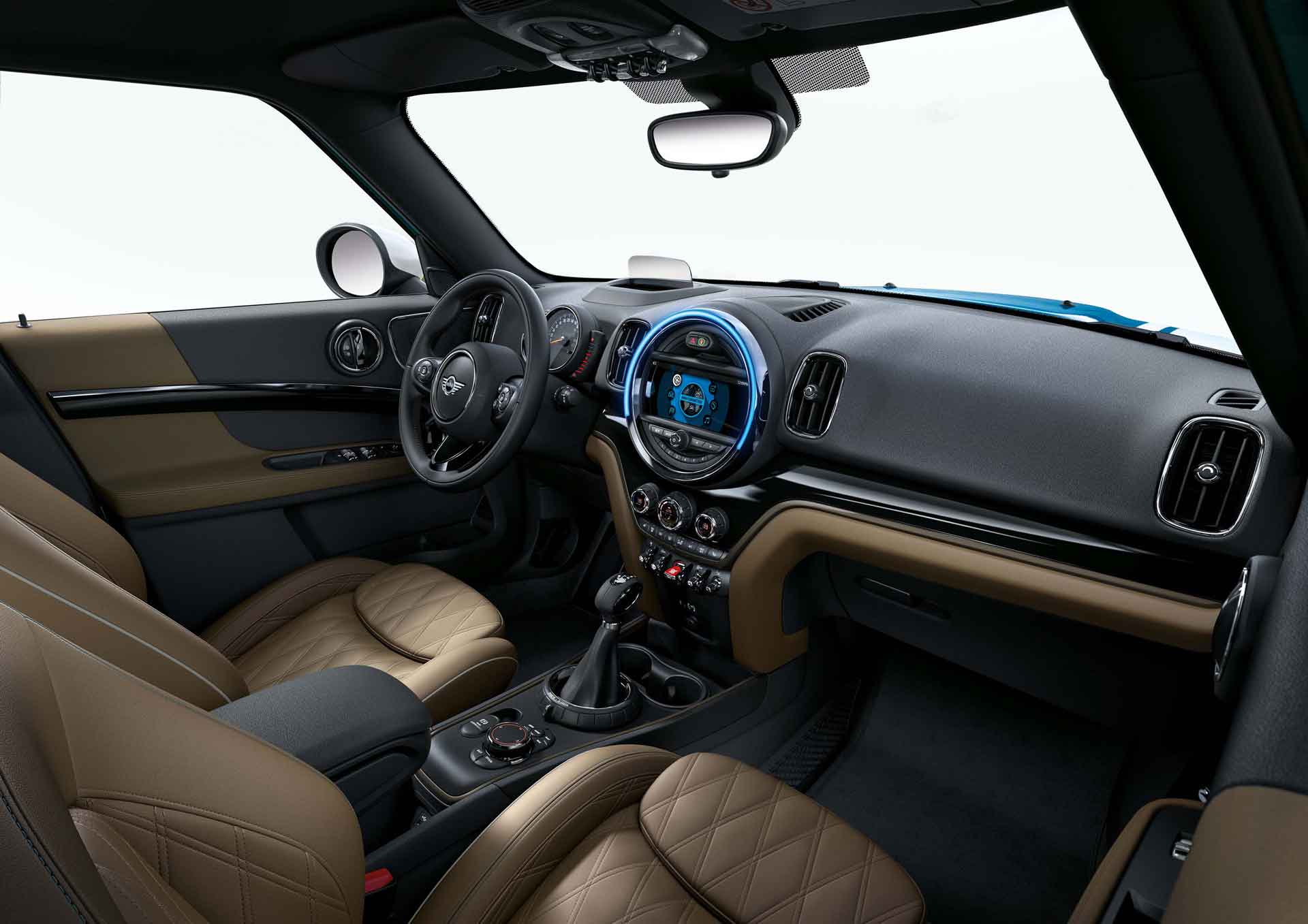 “The MINI Countryman has been a top selling model since it was first introduced in 2010 and we expect this new generation will be even more popular with existing owners, while also attracting new customers to the brand,” said Thomas Felbermair, Vice President MINI of the Americas. “The new Countryman not only provides customers with additional space for cargo and passengers, but also offers a new plug-in hybrid option with performance attributes that underline the fun to drive go-kart handling that MINI owners know and love.”

When it hit the scene the Countryman was the first MINI with AWD and four doors and now represents as the 2nd best selling MINI ever. The brand will continue to focus on their core pillars in the form of performance, versatility and individuality. For one, MINIs are fun to drive so power and excitement are necessary attributes. Two, with the wide variety of exterior colors, wheel options and accessories it would be challenging confusing your Countryman with the next. Lastly, what’s the joy of having such a neat vehicle if your homies can’t have none. So of course it is designed for transporting multiple friends and their gear (8.1” longer and 5.4 cubic feet more cargo space than the predecessor), say, for a weekend get-a-way to hike in Yosemite National Park. 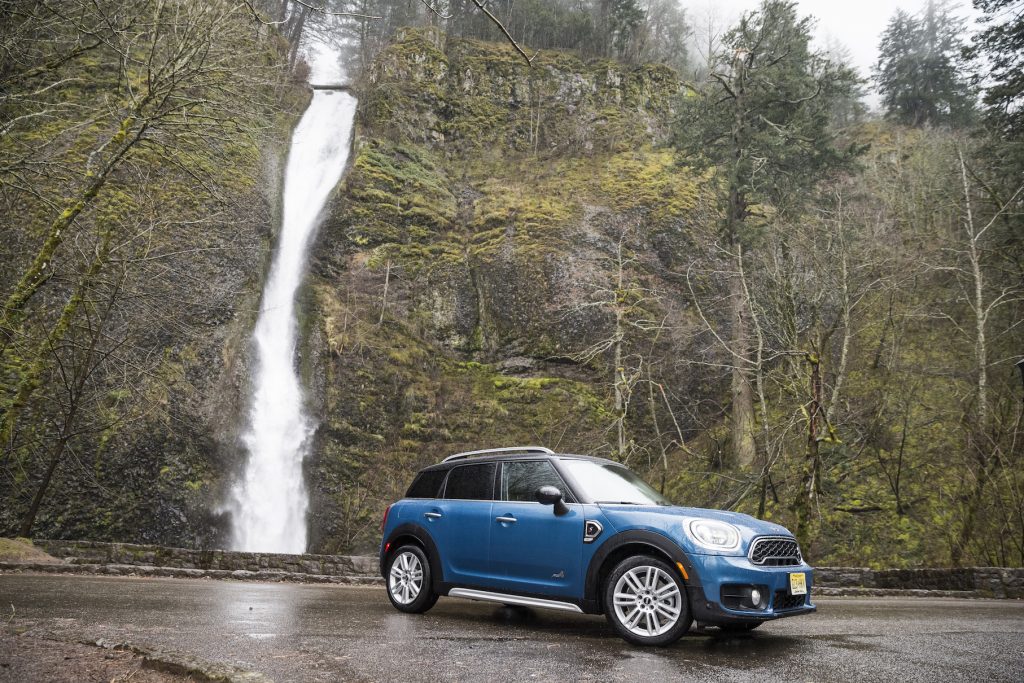 With new architecture — uses a great amount of high strength steel — new engines and new transmissions the 2017 MINI Cooper S Countryman ALL4 was a blast to drive all day in Oregon and Washington. Its handling and acceleration were impeccable. Even with the addition of a few hundred pounds the ALL4 is much quicker than the FWD. The all-turbocharged engine lineup starts off with the TwinPower Turbo 1.5-liter 3 cylinder engine with 134-horsepower that can be paired with either the 6-speed manual, 6-speed automatic (Cooper) or the 8-speed automatic (Cooper ALL4). On the drive in an Island Blue Metallic MINI I was able to experience the peppy TwinPower Turbo 2.0-liter 4 cylinder with 189-horsepower and 207 lb.-ft. of torque. It was blessed with the optional ($1,750) 8-speed sport automatic transmission with paddle shifters. Also available are the 6-speed manual (S ALL4) and the 8-speed automatic. For the 2.0 and ALL4 expect 31 highway MPG and 22 city MPG. Also at the bottom of the tall gear shifter you can click left for Sport mode or right for Green mode.

One of the most attractive attributes of the 2017 Countryman is the amount of standard equipment MINI loaded it with. No longer do you have to sacrifice your favorite items due to additional costs. Included are a Panorama Sunroof, Sensatec Leatherette Upholstery which I like over full leather, the 6.5” MINI Connected infotainment system similar to BMW iDrive, a Rear View Camera with guidelines, Rear Park Distance Control (parking sensors), Rain-Sensing Windshield Wipers which were needed in the snowy mountain weather, sliding and reclining 40:20:40 split-folding rear seats and satin-finished aluminum roof rails. A few options include the power opening tailgate, John Cooper Works Exterior Package, Off-road Appearance Package (cosmetic only) and the $2,250 Technology Package including Parking Assistant, MINI Connected 5.0 and MINI Head-Up Display which projects through a small screen onto the dash opposed to your road view ahead. I thought that was odd. The Advanced Wired Package adds the 8.8” Touchscreen Navigation, a new-Gen operating system and Qi wireless device charging although the iPhone Plus does not fit in the charging station. 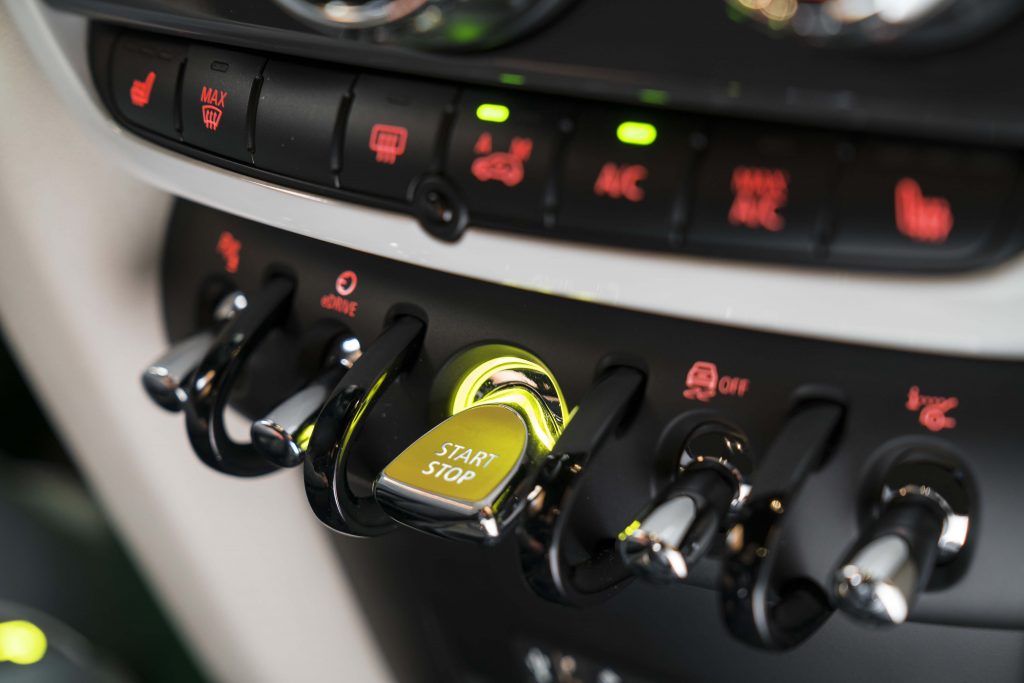 But not only does a MINI look good, it also feels good. The cockpit emulates a high-end sports car than a friendly people traveler. A super sporty, aggressive and multifunction JCW steering wheel ($250) for example hinted at the vehicle’s performance nature and the typical toggle switches for such things as igniting the engine or turning ESP on or off gives the impression of a pilot than a driver. Other niceties are the mood lighting, door armrests, thigh extenders, heated seats, two USB ports up front and large HVAC knobs.