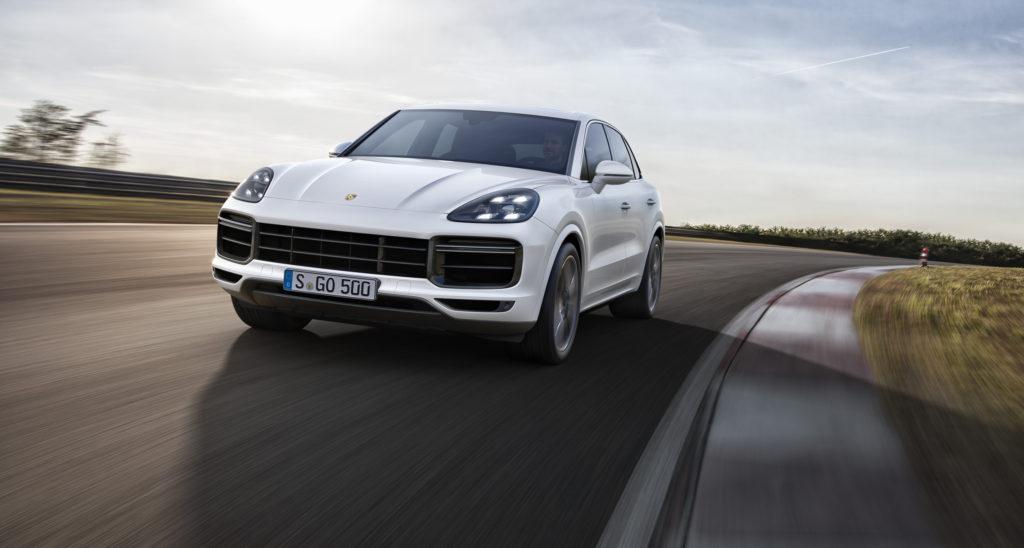 – Zero to 60 mph in 3.7 seconds (with optional Sport Chrono Package)

– Expected to arrive at dealerships in Fall 2018

The 2019 Porsche Cayenne Turbo took its place at the top of the model line at the 67th Frankfurt International Motor Show. The new model from the third-generation Cayenne range is once again raising the bar for sporty performance in the segment. Its twin-turbo four-liter V8 engine delivers 550 hp. The combination of innovations including a three-chamber air suspension, staggered tire sizes and new high-performance Porsche Surface Coated Brake (PSCB) technology result in improved driving dynamics. With additional options, such as rear-axle steering and electric roll stabilization with a 48-volt system, the SUV achieves the driving characteristics of a sports car. The new Cayenne Turbo accelerates from zero to 60 mph in as little as 3.7 seconds when equipped with the optional Sport Chrono Package toward a top track speed of 177 mph, representing gains over the previous-generation Cayenne Turbo S.

With an exclusive front end and the LED main headlights of the Porsche Dynamic Light System (PDLS), the Cayenne Turbo has a dominant appearance. At night, the new Turbo sets itself apart from other Cayenne models with its double-row front light modules. Widened wheel arches with painted trim and special 21-inch wheels reserved for the Cayenne Turbo characterize the side view. Turbo-specific twin tailpipes distinguish this model from its six-cylinder siblings.

Interior design elements including the center-mounted grab handles continue in the third-generation Cayenne Turbo. Like other members of the new Cayenne family the newest model features the Porsche Advanced Cockpit, which includes a high-definition 12.3-inch screen in the dashboard and an analog tachometer flanked by two seven-inch full-HD screens. Virtually all of the vehicle functions can be displayed and operated using the high-resolution display and touchscreen of the Porsche Advanced Cockpit. Among them, for example, is the standard 710-watt BOSE® Surround Sound System. Other equipment newly included by default in the latest Cayenne Turbo includes 18-way sport seats, seatbacks with integrated headrests, and standard heating functions for all outboard seats as well as the steering wheel. 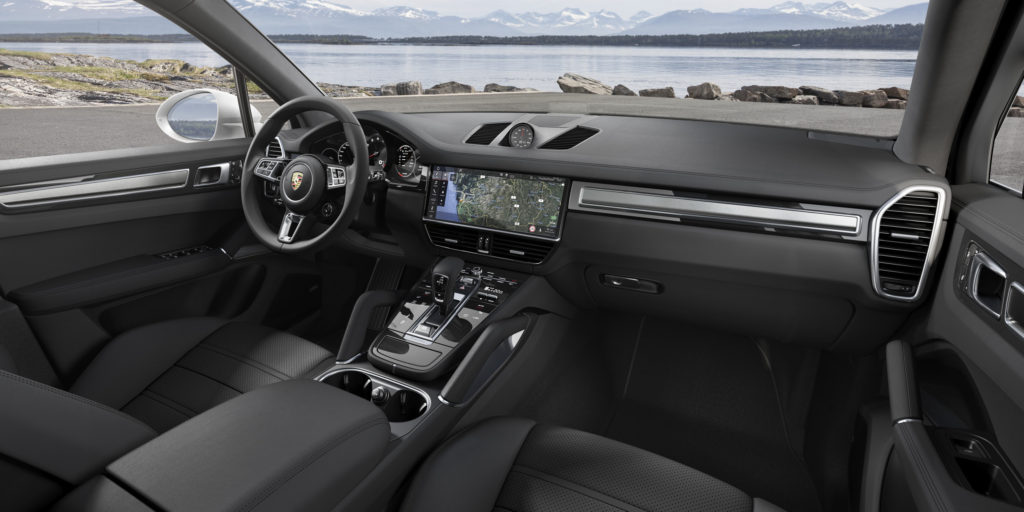 At the heart of the Cayenne Turbo is the twin-turbo four-liter V8 with 550 hp and 567 lb-ft of peak torque (increases of 30 hp and 14 lb-ft versus the previous Cayenne Turbo). Standard Porsche Traction Management (PTM) all-wheel drive works with the new eight-speed Tiptronic S automatic transmission to improve acceleration, speed, and highway cruising comfort. The new Cayenne Turbo exceeds the previous Cayenne Turbo S in many areas. For example, it sprints to 60 mph in 3.9 seconds (or 3.7 seconds when equipped with the optional Sport Chrono Package, 0.1 second quicker than the previous Cayenne Turbo S) and boasts a higher top track speed of 177 mph. The turbochargers are arranged inside the cylinder V, in a “central turbo layout.” The shortened exhaust paths between the combustion chambers and the turbochargers improve engine responsiveness and power delivery. This setup also creates a more compact package that is advantageous because it allows for a lower engine installation that helps to lower the center of gravity for improved handling characteristics. 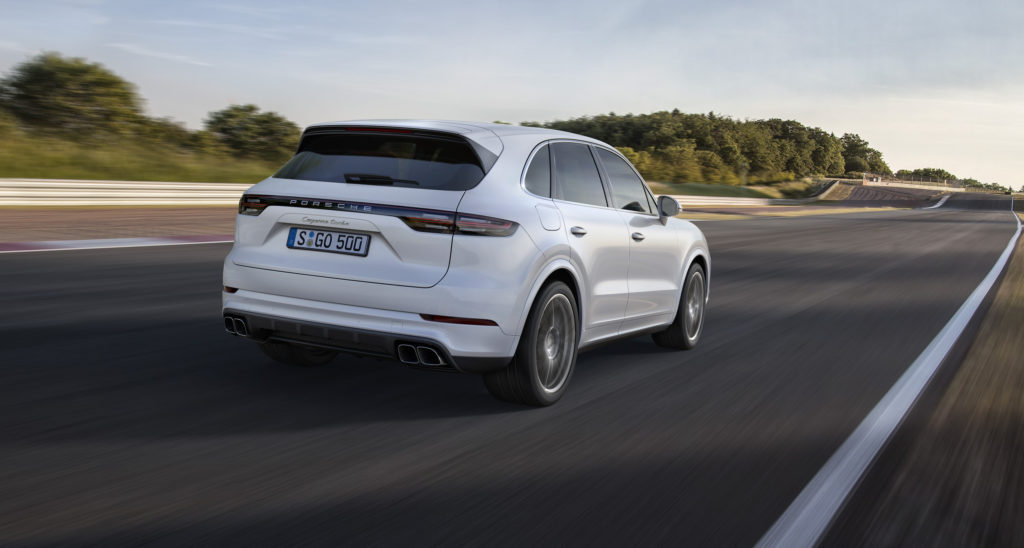 The new lightweight chassis of the Cayenne Turbo helps improve driving dynamics versus its predecessor. In particular, the combination of a new three-chamber air suspension with the Porsche Active Suspension Management (PASM) active shock-absorbers extends the range considerably. By using three air chambers per spring strut, the chassis is able to map a wider range of spring rates than the previous system could, allowing for improvements in both comfort- and performance-focused settings.

With six selectable height levels, the ground clearance can be manually adjusted to suit the off-road terrain. These are also actively controlled via five new driving programs for on- and off-road use. The default setting is the on-road program. Four other modes activate the conditioning for mild off-road terrain: Mud, Gravel, Sand, or Rocks. The drive mode, chassis settings, and differential locks can be selected to adapt to the relevant setting.

Complemented by optional rear-axle steering, electric Porsche Dynamic Chassis Control (PDCC) roll stabilization connected to a 48-volt vehicle electrical system and Porsche Torque Vectoring Plus (PTV+), the new Cayenne Turbo achieves impressive driving dynamics. Sports car performance is an even greater emphasis in the new Cayenne than past models. Accordingly, the front and rear wheel sizes are staggered to measure 285/40 at the front and 315/35 at the rear. This produces even greater longitudinal and lateral power application for agile handing.

The new Cayenne Turbo integrates an adaptive roof spoiler as a component of its active aerodynamics. Depending on the position, this optimizes efficiency, increases downforce on the rear axle, or shortens braking distances from higher speeds in the airbrake position. At full braking from 155 mph, the Cayenne Turbo comes to a stop up to 79 inches earlier as a result. The aerodynamic system therefore complements the effect of the new high-performance Porsche Surface Coated Brake (PSCB) which is included as standard with the Cayenne Turbo. The tungsten carbide layer applied to the cast-iron discs increases braking performance and wear resistance while reducing the amount of brake dust at the same time, meaning less dirt on the rims. The Porsche Ceramic Composite Brake system (PCCB) is still available as the top-performing option.