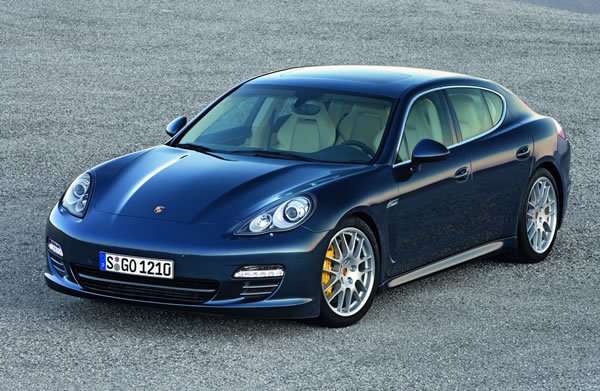 The moral of the story is simple. If you have a thoroughbred at your dispense you don’t walk it to the barn. You run it in the open! And that’s exactly what we did with Porsche’s all-new stablemate — the 2010 Panamera – on Germany’s Autobahn. There, we were able to surpass 178 mph in the Turbo (a few mph shy of its top speed of 188 mph) all while our driving companion relaxed in the comfortable back seat. Yes, a Porsche sports car that seats four uncompromised! Welcome to the future ladies and gentlemen.

The Concept: To embark upon the future one must understand what directions were taken in the past. It’s like watching all these new movie sequels (Terminator, Star Trek, X-Men) whereas the plot showcases how it all began. Then you have to go back and watch the originals, which actually are the future stories. For Porsche, manifesting a concept that would eventually lead to a new market segment was no easy task. It consisted of incomparable bravery, consummate creativity and inconceivable (at the time) technology. And being Porsche’s first all-new vehicle built from the ground up since the Cayenne, anticipate high expectations. The engineering and design teams had to work cohesively to produce a vehicle that was viewed as a coupe; could seat four; offer ample luggage space; perform like a 911; provide the comfort of a sedan, and of course feel like a Porsche feels — amazing! After hundreds of miles behind the wheel I can honestly applaud the outcome. The design is one that has to grow on you. Our only gripes were the shallow cup-holders, the reflection of the speaker trim in the windshield and the fact that the passenger seat barely reclined.

Performance: Moving 4,000 plus pounds is no easy task this day in age when fuel consumption is a top government and environmental priority. However, Porsche was able to obtain such a balance. Offered in three variants – S, 4S & Turbo – the Panamera’s 4.8-liter V8 feels good in either version. The S and 4S share the same powerplant producing 400-horsepower and 369 pound-feet of torque, skirting from 0 to 60 mph in 5.2 seconds (S), 5.0 seconds (S with Sports Chrono Package Plus), 4.8 seconds (4S) and 4.6 seconds (4S with Sports Chrono Package Plus).

“To be the best you have to beat the best,” once said the great Hall of Fame Syracuse coach Ben Schwartzwalder, who lead his football team to their first national championship in 1959. So Porsche instilled the 500-horsepower Turbo with advancements that would lead the vehicle to meeting the 4-second 0-60 mph barrier with ease. Add “Sports Chrono Package Turbo” and the all-wheel drive (AWD) Turbo blips the distance in 3.8 seconds! A six-cylinder engine makes its debut next year. And speaking of AWD, some of our drive time was spent in the rain, a “water and oil” recipe for sports cars. Yet, the 4S had no problem with the adjustment. We intentionally attempted to break the vehicle’s drive path on wet curvy turn but couldn’t. It stayed on course. Push the vehicle to its maximum speed as we nearly did and brake hard! In seven seconds you will be at a standstill. Seven seconds!

More great technology includes an adaptive and retractable rear spoiler for optimal airflow, minimum resistance and maximum downforce depending on vehicle speed. Add PASM (Porsche Active Suspension Management) and the vehicle’s feel – sports or comfort – is at your disposal. An Adaptive Air Suspension adds breath to each spring for more activity. Engage Sport Plus Mode to set off a number of adaptations in the chassis to make the Panamera even sportier — like lowering the vehicle by almost a full inch. A completely new auto start/stop function cuts off the engine to reduce fuel consumption when the vehicle comes to a stop. Yet, for safety reasons I didn’t like the steering wheel locking up. The system can be manually switched off.

PDK Defined: Porsche first used PDK in 1983 in a 956. The original technology was specifically for their racecars. In fact, many of Porsche’s consumer vehicle technologies are inherited from their racing experiences. PDK, which replaces Tiptronic S, is a combination of two gearboxes with each having its own clutch. When the transmission is set in any particular gear, the gear on deck awaits patiently for selection allowing immediate and faster shifts. PDK can be driven as an automatic and as a manual. Pros include quick starts which automatics provide and manual benefits including low power loss, reduced weight and efficiency. Porsche says PDK also decreases fuel consumption. One reason is due to the seventh overdrive gear which leads to low engine speed and lower gas consumption.

Style: Its silhouette is similar to Porsche design and not so similar. A sedan morphed into a hatch is my first impression. Odd, weird and interesting, pictures do it no justice. It’s a vehicle that takes getting used to. But each hour spent in the Panamera increases your respect for what it is and what Porsche needs it to accomplish. Strong shoulders, high wings, low, long and wide body sums it up. The rest is left to the eye of the beholder. By far, this is the best interior Porsche has ever had. Pristine, immaculate, enticing! The raised center console puts the vehicle’s controls at your disposal, literally. Nothing is hidden. The hatch brings utility along with rear seats that fold down. I was amazed at the level of storage the Panamera has. Usually in a Porsche my bags are on the passenger’s lap. Creamy decors like Peanut Butter with matte wood finish add a touch of sensuality. Turn up the Burmiester High-End Surround Sound System ($5,690) and the world outside becomes non-existent. A Porsche with a premium sound system? Times have truly changed and Porsche has adapted.

Porsche expects to make around 20,000 Panameras a year will be made with an October 17th launch date in the States. Porsche estimated 80% of buyers of the Panamera will be new to the brand. It’s a tough time to launch a sports car, especially when the competition is so deep. Bidding starts at $89,800 for the S, $93,800 for the 4S and $132,600 for the Turbo. Excludes destination charges. I bet you Seinfield got a Turbo!