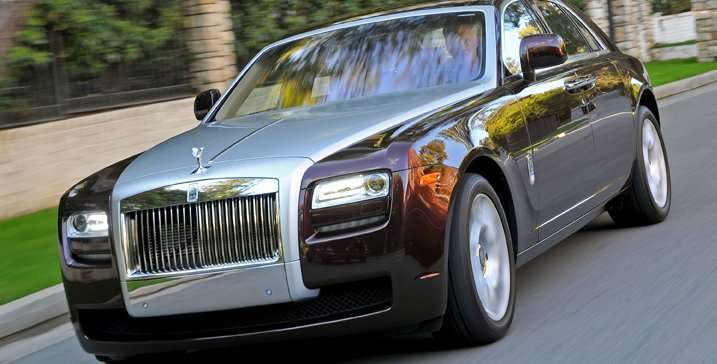 Why not navigate through life with precision and finesse? Style and grace? Character and integrity? Why not break away from the Hollywood hustle and cruise gracefully down to Newport Beach and lease a three bedroom Villa at The Resort at Pelican Hill for two weeks replete with a butler, two-car garage, fine dining and five-star hospitality. Let’s rise early to greet the incandescent sun and enjoy one the most imaginative vistas you will witness in this lifetime. After inhaling a breath of life, we’ll take a quick stroll out front to engage with the all-new Rolls-Royce Ghost, sitting prodigiously and patiently for us to take the helm.  For this is what I call “a privileged view.” And this is precisely the sequence of events that took place during Automotive Rhythms’ drive experience with the latest sonata from the British marque during the international press launch of the Ghost in Southern California.

In 2009, Rolls-Royce sold 330 cars within the United States and 1000 worldwide. A fairly small number of vehicles, but at a starting point of $380,000 for a Phantom, the profit ratios can be very rewarding. Yet, Rolls-Royce knew it needed to do more. So in the fall of 2006 at the Paris Auto Show, they announced what would become a new product line for the family. Not much was conveyed to the attentive audience except size and pricing estimates.Conversations of its appearance began immediately. Eventually it would be code named RR4 in the spring of 2008. At the time Chief Designer Ian Cameron stated, “The RR4 has a more informal presence than the Phantom models with a greater emphasis on driving.  In design terms this is expressed through its slightly smaller dimensions, yet with powerful, purposeful proportions.”

Keep in mind the Ghost is not an adaptation of the Phantom. In the last fifty years Rolls-Royce has only launched an all new vehicle four times with the Ghost being the fourth.  From 2003 to 2009 they unveiled a family of Phantoms including the Phantom, Phantom Extended Wheelbase, Phantom Drophead Coupé and Phantom Coupé. With appreciation I’ve driven them all, with the Drophead being my most cherished. Rolls-Royce now welcomes a second distinguishing vehicle platform and expects annual sales volume to double or triple.

The Ghost is reminiscent in character to the Phantom but is 17″ shorter, weighs less, and is far more dynamic. Yet, like all Rolls-Royce vehicles, it incorporates a Yacht-like blueprint with large surfaces positioned fluidly by strong, horizontal lines. A long bonnet (front end), large wheel wells, umbrella installed within the front doors, wide rear-hinged, self closing doors and the “Spirit of Ecstasy” iconic hood ornament, which hibernates upon ignition cut-off, assimilates the Ghost with the rest of the brand.

Upon vehicle entry you are instantly transformed into an executive, a member of high society,  athlete or entertainer.  You feel the part of a Rolls-Royce owner who typically generates their own wealth, and not through inheritance.  Customarily, they are entrepreneurs with philanthropic endeavors. And to the contrary, most owners drive themselves and normally do not hire chauffeurs. Immediately you recognize the coach-built accoutrements of the vehicle from the steering wheel stitching to the layers of remarkably finished veneers. Manipulated by 60 sets of hands, Ghost assembly requires 2000 separate operations with a minimum of 20 days for completion.

Once ignited, its 6.6-liter twin-turbo direct injection V12, unique to the brand, prepares to deliver a refined 563 horsepower through an eight-speed, shift-by-wire, automatic gearbox. Get it moving and you’ll feel that the Ghost rides on a bed of clouds with its double-wishbone front suspension and multi-link rear suspension, which work in conjunction with electronically variable air dampers. The vehicle does fly around corners as I witnessed on meandering Cali roads — but it stills feels immense and floaty.  On the straights is where it is most impressive with a 0-60 mph acceleration of 4.8 seconds and a top speed of 155 mph (electronically governed). Yet, I’m not fond of the soft-touch gear selector located on the steering column. It’s too gentle and feels like the windshield wiper switch. Other features are very reminiscent of the 2009 BMW 750 Li Automotive Rhythms has in our long-term fleet including a Rolls-Royce version of iDrive which operates via a 10.2″ screen, the eight programmable memory buttons below the screen, and a bevy of safety assistance systems like Night Vision, Head-up Display and Lane Departure Warning.  Keep in mind, The BMW Group purchased Rolls-Royce in 1998 and has helped the British company achieve a higher level of performance and technology engineering.

So I took full control of the wheel, set my sights for the good life and never looked back, indeed another privileged view. And as the great Sir Henry Royceonce said, “this will be splendid country for letting the cars out a bit.” He certainly would be proud of the Ghost!