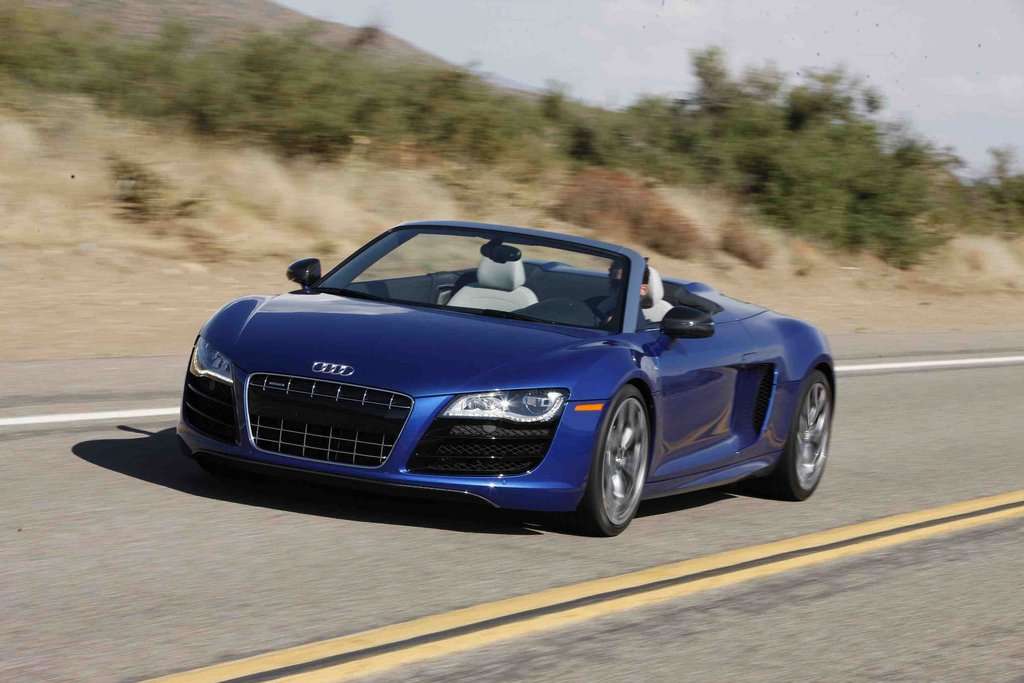 Eternal bonds, layers and rings of nature evoke timeless perfection in the intricate systems that comprise the symbiotic relationship between man and machine. Well the four rings of Audi represent such a thesis and have led to the manifestation of their first open top super car. The magnificence of the V10 engine puts the R8 V10 Spyder in the same conversation with Porsche 911 Turbo, Aston Martin Vantage V12 and Mercedes-Benz SL63 AMG. After all, Audi has dominated the 24 Hours of Le Mans this decade, so why not bring that winning spirit to public roads?

Anticipation of the R8 V10 Spyder has been high since the R8 coupe was first conceived. Cash deposits to dealers started over three years ago from eager customers. Why so? Well, the thought of it captivated the imaginations of auto enthusiasts in ways unthinkable. After all, Audi has always been in the shadows of their German countrymen from Mercedes, BMW, and Porsche. But in the last few years they have come into their own from both a product and marketing perspective. You don’t involve yourself in Super Bowl commercials, Iron Man movies and historic Miami art festivals unless you have stellar vehicles to show off prominently.  There have been events where over 100 Audi SUVs where tasked to roam the streets providing transportation to the social elite. It’s now Audi’s time to shine.

To experience another great quattro all-wheel drive machine, I headed to Del Mar, California where it’s vacation weather all year long. Open roads, clear highways, and curvaceous mountain roads allowed me to digest the massive hype surrounding the Spyder. Its 5.2-liter V10, FSI gasoline direct injection engine produces 525-horsepower and 391 pound- feet of torque without any turbo or superchargers. The naturally-aspirated powerplant has an impressive 8700 RPM redline which allows the R8 to hold gears longer. For instance, I reached 80 mph in second gear with a feeling of amazing acceleration. The R8 Spyder can run 0 to 60 mph in 4 seconds and tops out at 195 mph (2 mph less than coupe).

My tester featured the R tronic sequential transmission with steering wheel mounted shifters. It’s a paradox of performance and intellect. My only concern with R tronic is the slight hesitation when upshifting. I asked about the stellar DSG dual cutch transmission as a solution but Audi says it currently can’t handle the V10’s torque. I do like the rev matching feature on downshifting, as it produces wonderful sounds and ensures the transmission is ready for the next hard input from your right foot.

To alter the coupe into a convertible, Audi had to maintain the R8’s prominence aesthetically while still achieving unadulterated performance. That has been achieved with the signature Audi one-piece grille, elongated side air intakes, wide stance and quattro. Changes necessary for the Spyder include the removal of the hallmark side blade, an aluminum A-pillar which wraps around the windshield like a tuxedo vest, and of course the cloth soft-top which is operated by an electro-hydraulic motor and can be dropped or raised up to 31 mph. Aluminum optic engine vents play on the rear engine cover. Think of them as the cufflinks to your Tux. The top is acoustically lined to maintain similar sound deadening as the coupe. A rear retractable window can be rolled down while top is up so you can hear the V10 and doubles as a windblocker when the top is down. I got a chance to experience the ease of the top’s retractability when it began to rain on my parade. Quickly, I slowed the vehicle down from 80 mph to 30 mph and waited for the top to close in 19 seconds. However, the vehicle is much more appreciated with the top removed. We all know that!

The use of carbon fiber in key areas — such as all of the rear panels — is specifically utilized to give the vehicle a 43/57% front-rear weight bias. Quattro permanent all-wheel drive is also rear biased with 85% rear toque bias and up to 30% moving to front when needed. The aluminum Audi Space Frame (ASF) is also lighter and rigid for optimal vehicle dynamics. Audi magnetic ride features a “normal” and “sport” mode and automatically adjusts the suspension to individual wheel inputs and ride condition. Sport mode can be changed on the fly in milliseconds for track performance. Its underbody has an intricate aerodynamic system indicated by the rear diffuser which helps keep the Spyder grounded.

High-speed acceleration feels much safer with all-wheel drive. Your confidence in the vehicle’s behavior is stronger because the vehicle is more stable, has more turn input, and uses four drive wheels instead of two for maximized grip. Make sense? This allowed me to take chicane-like mountain passes with confidence. It would have been inconsequential if I were to be cited by 5-0. No impudence to state law but my drive felt too glorious. I could have driven for days or weeks in the R8 Spyder. The vehicle is so powerful and fluid and scans roads like point guards ready to make a move any moment.

Stepping in the vehicle instantly connects your body with the low slung cockpit. The steering wheel is thick, the shifter is solid, seats are conforming and the pedals including the dead pedal are spaced perfectly. A vigorous leather arc, which Audi calls the Monoposto, outlines the steering wheel and cockpit and falls into the driver door offering a feeling of even more control.  The standard Multi Media Interface navigation system runs in conjunction with great iPod connectivity, dubbed the Audi Music Interface. Also standard is premium Bang and Olufsen audio which is customized and specific to every Audi product. Yet, I found this sound system less powerful than anticipated. Top end volume was minimal, especially at high speeds.  Another advancement is Bluetooth seatbelt microphones for clearer conversations when the top is down.

Audi produces and sells under a thousand R8s a year. With the Spyder, that number should increase but Audi doesn’t have specifics. The base pricing for the R8 Spyder is $161,000 for the 6-speed manual. This represents a $13,500 premium over the coupe. The R tronic transmission is a $9,100 option and increases the starting price to $170,100. Typical transaction prices range from $170,000 to the mid $180,000s. The first vehicle was auctioned off to charity for the Boys and Girls Clubs of America with the lucky winner already haven taken delivery. There are over 864,000 various combinations to build your Spyder.  The hand-assembled Audi can typically take three months to be built and four and a half months if there are bespoke requirements.
The R8 Spyder has been given a contemporary twist, crossing next-gen motifs with high performance execution. One of Audi’s marketing lines is “Truth in Engineering.”  Expect more truth in the R8 V10 Spyder’s open-top driving.