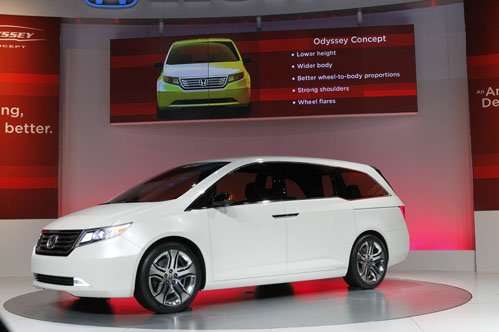 Honda’s Odyssey minivan has been the top-selling in its segment and owns the youngest, wealthiest customers in the segment, but the company aims to bolster its appeal to those shoppers with a swoopy new model that emphasizes sleek lines over stodgy practicality. The company showed a concept version of its planned 2011 production Odyssey that will be in showrooms later this year, so the “concept” label mostly meant that journalists couldn’t climb inside and paw at the prototype rolled onstage.

The concept revealed a steeply raked windshield, low roof and wide stance rolling on 20-inch wheels that dramatically pushes the Odyssey’s profile in the direction of popular crossover SUVs and away from the tall, tippy, shopping cart proportions typical of minivans.  How the company accomplished this without producing a clone of the derided General Motors “Dustbuster” minivans of the ‘90s wasn’t immediately apparent, but they did succeed in avoiding that.

A potentially polarizing detail is a z-shaped “lightning bolt” beltline that causes the bottom edge of the rearmost side windows to jog downward at the back.  This has the dual effect of jolting the eye and of increasing the size of the windows for the third row occupants, hopefully reducing any tendencies toward carsickness those passengers might have.

Honda does not appear poised to join Toyota by testing the market for a four-cylinder minivan, but will instead continue with its 3.5-liter V6, but with its cylinder deactivation technology as standard equipment on all models.  That contributes to a predicted EPA fuel economy of 19 mpg city and 28 mpg highway.

Honda assistant vice president of product planning Vicki Poponi explained that the company’s goal was to “redefine the minivan,” and the 2011 Odyssey has the potential to do that as much as possible for any vehicle with sliding rear doors.  The van’s roof is an inch lower than that on the current model, and it is an inch and a half wider, so the new model has enough interior space to hold three infant seats abreast in its second row, making it ideal in households blessed with multiple births.