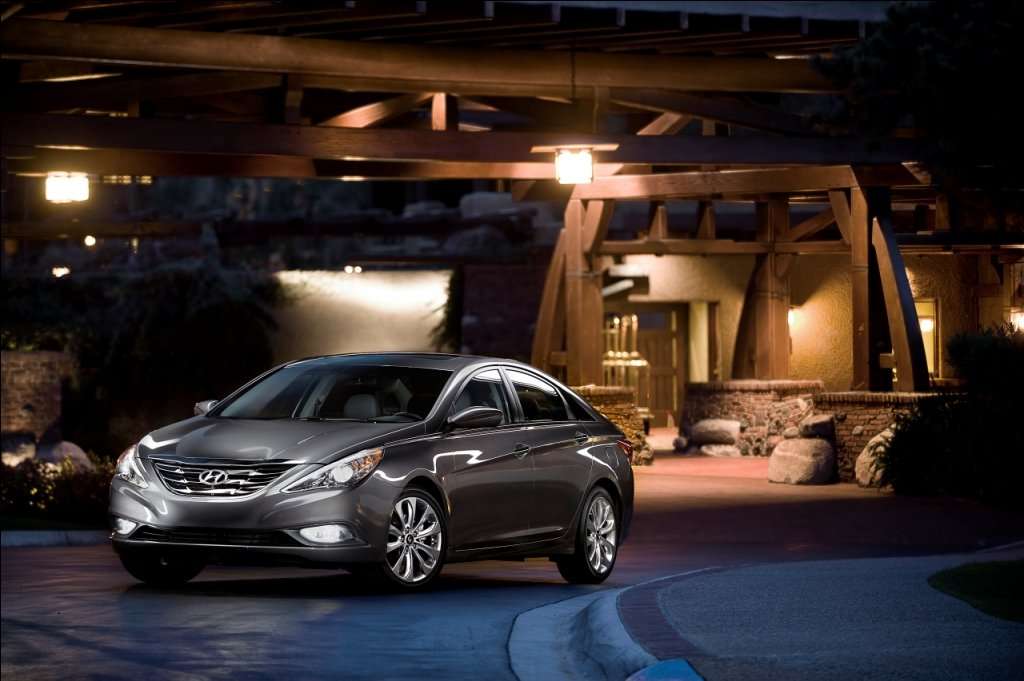 It’s no secret that the Koreans have been achieving major sales success with a plethora of new products consisting of timeless styles and freestyle idioms that speak to a diverse multitude of individuals. Both Kia and sister Hyundai are on a downhill roll, with Kia focusing on value and Hyundai taking on value along with entry luxury with the Genesis, sports luxury with the Genesis Coupe and soon-to-be top-of-the-line luxury with the Equus which we had the pleasure of driving back in August. If positioned and priced right, it will continue the positive flow for the company. Currently, the big news is the opus of the family, the all-new 2011 Sonata which Automotive Rhythms experienced in La Jolla, California at Tiger Woods’ favorite Golf Resort, Torrey Pines. Without a doubt it’s going to give Camry, Accord and Altima problems!

The Sonata is a traditional, mid-size family sedan without much tradition in the segment. What’s happening here is that Hyundai is re-directing how people think traditionally. Why can’t you have a vehicle that offers value, looks good, is loaded with technology, is fuel efficient and offers a 10-year warranty? You can. In fact, Hyundai is now the industry fuel economy leader with a fleet average of 30.1 mpg according to the EPA. Honda places second with 29.7 mpg. As a standalone, the Sonata is able to achieve 35 mpg highway and 24 mpg city with the manual transmission. To showcase such, Hyundai held a mpg challenge for fellow media who drove the vehicles and averaged at least 50 mph on the journey. Without actively participating yours truly came in second while driving from the coast to the rolling southern California mountains. 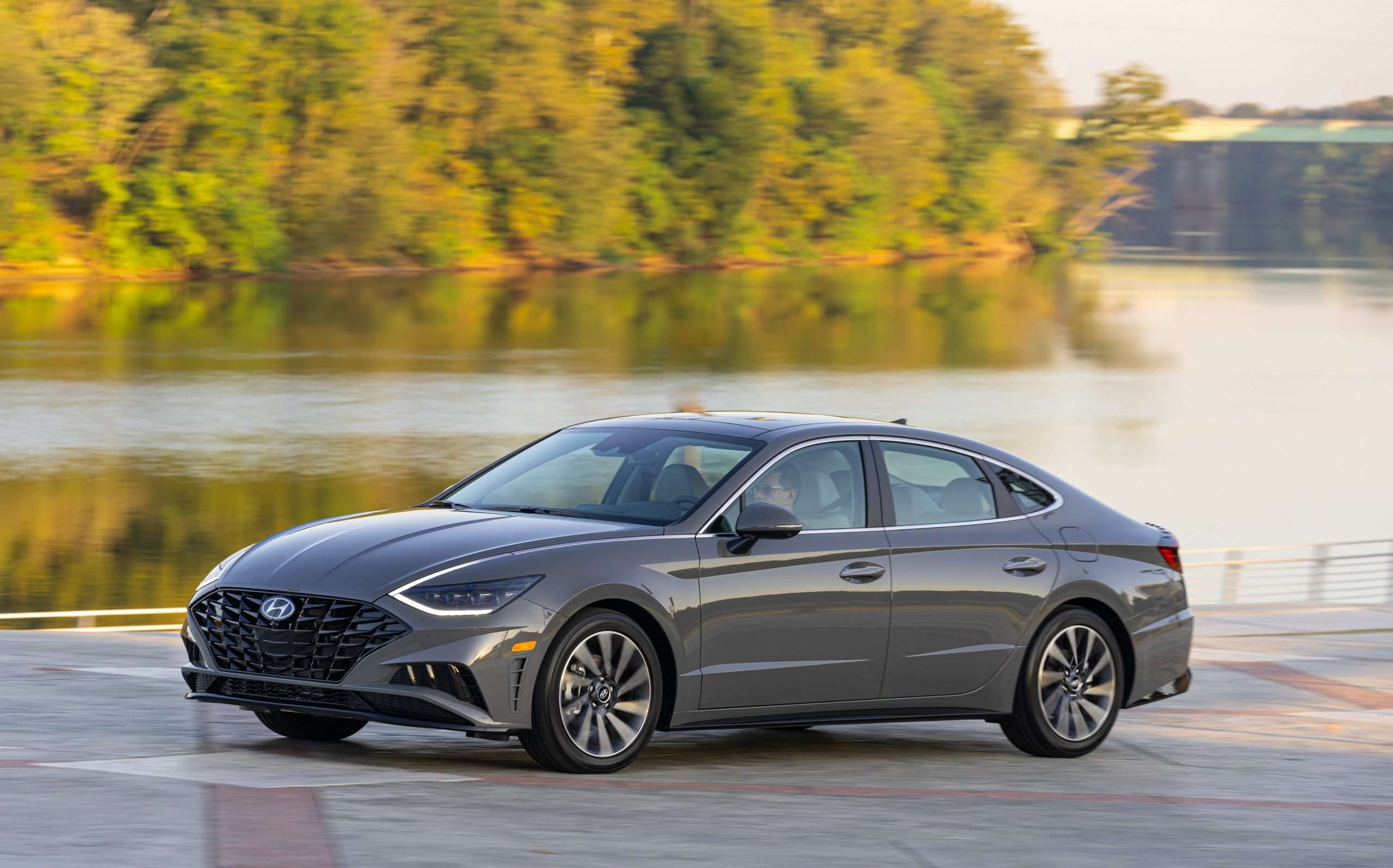 Offered in three models: GLS, SE and Limited, the value proposition starts at $19,195 for the GLS with manual transmission while the top gun Limited with the Navigation Package goes for $27,395. Normally $20K vehicles are considered bargain buys which are befitted for the cliché, “you get what you pay for.” But the Sonata carries a certain swagger. “You get what you came for” is what I say.  The sleek body and intensive lines, such as the sharp wedge running across the beltline shows character. Slick headlamps, noticeable grille, chrome touches and aftermarket styled rims add to the Sonata’s artistic demeanor. With 140,000 sold in the U.S. last year, Hyundai is betting the house on the all-new sixth generation model.  Exterior color selections such as Iridescent Silver Blue, Venetian Red and Black Plum are a testament to the company’s commitment to making this vehicle as desirable as a Genesis.

Take a look inside and you’ll find parallel comparisons to the silhouette.  The Sonata’s cabin is where the vehicle shines the most. Choose your shade of hide from Camel to Wine Leather and feelings of extravagance begin to settle in. A central controller operates most functions on the sci-fi instrument panel which houses the 6.5″ touch-screen navigation and audio systems. Keep in mind some operations are touch-screen and some are manual. Bluetooth, Bluetooth audio streaming, XM NavTraffic and Data Services, rear backup camera, available rear heated seats, available HD radio, key/push start button, steering wheel paddle shifters, and iPod/USB and auxiliary input jacks add to the technology of the Sonata. Driving and navigating via the features was simplistic. On my drive I never tired of the vehicle. The only gripe was the lack of true power in the new four cylinder engines.

Hyundai will forgo a six cylinder engine for the Sonata line-up in place of a fuel efficient 4-cylinder. Of course this is the exact reason why the vehicle achieves 35 highway mpg. However, the sacrifice comes in the form of pure power, which the Sonata lacks. Especially uphill and entering freeway ramps. If too much gas is given with expectation of acceleration the 2.4-liter screams as if driver and car were enemies. You have to massage the throttle for proper response. Hyundai’s quick fix is a statement declaring the arrival of the turbo (at least 250 horsepower) due later this year. The direct injection 4-cylinder engine comes standard with 198 horsepower and 184 pound-feet of torque and with either a 6-speed manual or 6-speed automatic with SHIFTRONIC for manual shifting. Electronic stability control brings active and passive driver safety into the hands of the vehicle.  The Sonata is enhanced with anti-lock brakes with electronic brake-force distribution, cornering brake control, brake assist system, and traction control.  I usually only see such technology vernacular when referring to German vehicles!

PrevPrevious2011 Hyundai Sonata
Next2009 Honda SH150i: A Japanese scooter made in ItalyNext