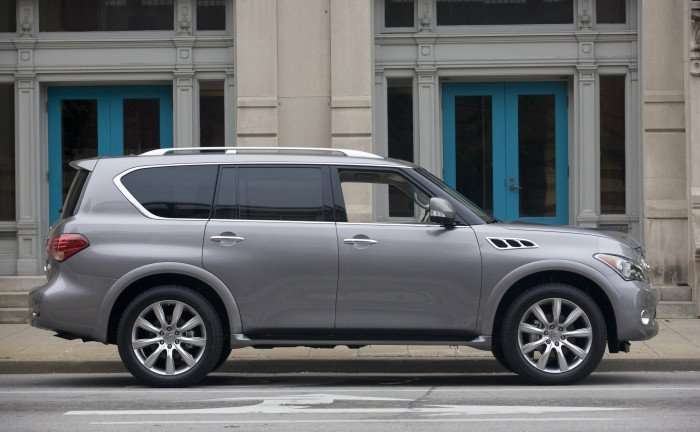 There are not too many full-size, 7-passenger luxury SUVs in the marketplace that remain relevant. They can all be counted on one hand. Our 2011 Infiniti QX56 is one of them. The 3-month winter loan proved how valuable the gargantuan SUV from Japan really was. From family gatherings to entertainment branding, the QX56 became a frequent request for events and VIP shuttling services.

The new styling sets itself apart from the Nissan Armada, which the previous generation QX resembled a little too closely. Now, it’s very curvaceous and bubbly and everything on it is big, including the 5.6-liter V8 with 400-horsepower. On the highway its power and acceleration creates an intimidating advantage. So getting around with the big guy is easier than you think. And the 7-speed automatic transmission with Manual Shift Mode is pure and smooth. All-Mode 4WD is a requirement for unpredictable North East weather and came in handy during those snow days. The downside to the size of the QX56 and its hefty V8 was filling up at the pump. The 26-gallon tank frequently lessened our wallets by $92 to $100 a pop! And the fuel goes quick.

Jump inside and you wonder why you never took into consideration that size does matter. The cabin is completely spacious. In addition, our vehicle was fully loaded like a Wendy’s baked potato. We had the Theater Package, which gave us dual 7” screens, the Technology Package replete with Lane Departure Warning and Lane Departure Prevention, and the Deluxe Touring Package, which added massive 22” 9-spoke forged aluminum spins. Those wheels had no problem absorbing everything on the road, including rough city streets. Especially Washington, D.C.’s infamous New York Avenue, which at times resembles a NATO battlefield. Options took the base price from $59,800 to $71,850 so ascertain that each optioned package meets your individual needs. Other added niceties included navigation with an 8” color display, streaming Bluetooth audio, Bose 13-speaker Surround Sound, 9.3 gig Music Box and Around View Monitor, which gave us the perfect park every single time.

With all of its luster and technology, you can imagine why our 2011 QX56 was so highly requested from social elite. Lets see what they had to say:

Vontae Davis, Miami Dolphins: This vehicle is nice. I own a Range Rover and didn’t know about the QX56. I may have to go and get one.

Jennifer Hudson, Singer & Actress: I love the new body style as well as the interior. I also loved the handling of the truck in the rain, the way the new body style turned heads, and the 360 back up camera view! I really want one!!!!

Rich Confalone, Discovery Networks: It was luxurious and practically drove itself, and I mean that literally because of the distance sensors. Great speed and handling for a vehicle that size.

Gary Richards, Diddy Entertainment: The QX56 defines all aspects of automobile luxury. Every possible detail and creature comfort is at your fingertips when behind the wheel of this luxury SUV. As a known “Big SUV Guy,” riding in the new QX56 lures you into a comfort zone only found in luxury cars. The smooth ride, easy acceleration, premium sound system and comfortable leather seats all live up to the luxury standard of Infiniti. During my time with the QX56 I had the opportunity to show it off to one of Hip Hop’s royalty Rick Ross and his artist Wale and Meek Mills who are touring the country on the “I am Music Tour.” Ross was pleasantly surprised at how spacious the QX56 was. He also noted all of the features many of his personal high-end cars have.

Dontae Hogan, NFL Player Manager: The “Q” embraces both the luxury and personality of modern flair while retaining several styling elements from its predecessor. At firstglance the SUV is breathtaking, with a much smoother presence but with harder-edged features. On the road this truck screams “beware” to little car, and “take notice” to the larger trucks. The moment you step in, it’ll feel like stepping into a space shuttle about to take commands for launch. For the women who love gadgets and the men who require power, this is the truck that will satisfy all. With an upgraded navigation system, a nice large color display, impeccable stereo system with DVD player, this vehicle became a traveling entertainment theater. And let’s not forget about the little passengers who enjoyed watching movies without having to disturb the driver’s music.

Rashad “The Party Starter” Jenkins: The 2011 Infiniti QX56 embodies luxury and sophistication. The ride is smooth and controlled (especially in the rain) and accelerates and handles like a sports car! I am an avid full-size SUV driver. This would be my preferred choice.