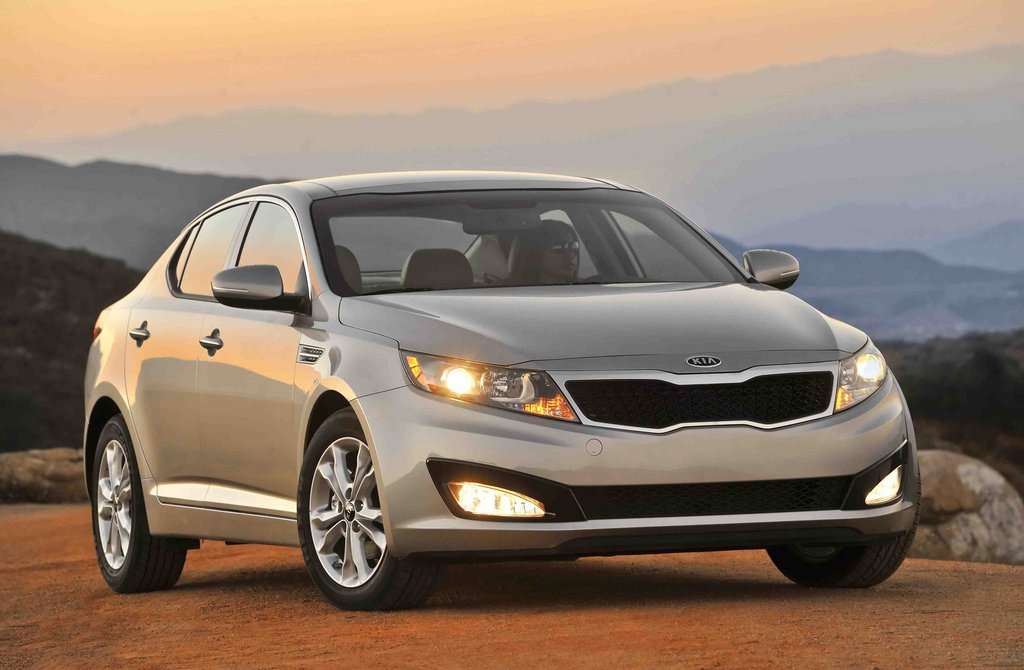 Ladies and gentlemen, please don’t be fooled by naive judgment or misconstrued by popular demand when searching for your next mid-sized sedan. Expand your horizons and think outside the box. Have you ever thought about cross-shopping a Kia against a Toyota, Ford or Honda? If your family has an ownership tradition of Camrys or Accords, have you relegated yourself to the same ideology, or do you mitigate redundancy by researching commensurate brands appetizing to your taste buds? It’s not a conundrum folks. Dilute public perception by exploring an auto brand and model with substance, styling, technology, and of course fulfills your needs. How about taking a look at the all-new 2011 Kia Optima?

Interesting enough, I sent a picture of a red Optima SX displayed on the courtyard of The Pelican Hill Resort in Newport Beach to a few of my gearhead friends to test their automotive acumen. Of course the pristine and tropical setting of this 5-Star property was very misleading, as you normally wouldn’t equate Kia to the finer things in life. Yet all five of them got it wrong or couldn’t get it right. Answers included a new BMW, a Lexus ES Concept and simply “I don’t know!” The moral of the story is that auto brands no longer have to hail from Japan, Germany or the U.S. to compete well in the marketplace. The Koreans are eliciting emotions and backing them up with groundbreaking new vehicles. The onus is on the competition to strike back and compete for territory long unchallenged.

First seen during the 2010 New York International Auto Show, the 3rd generation Optima will be available in dealers this fall. The operative word is “design.” The Optima surely doesn’t look like anything Kia has done in the past – which is a good thing. The rear resembles the new Jaguar XJ, the side profile is comparable to the Lexus GS and the front has some Acura-like styling cues. Quite impressive that such a vehicle could resemble high-end luxury vehicles: a plus for Kia. Conversely, you wouldn’t want to say your luxury vehicle looks like a Kia. Jaguar’s Design Director Ian Callum would be quite offended. To stay atop of the ever changing style trends, Kia’s main design studio is based in Southern California where they develop production vehicles and concepts cars for the U.S. market.

If it looks like a concept then that means it’s hot.  And the special edition Optima SX definitely looks like a concept – perhaps the reason my friends couldn’t decipher its origin. The Optima’s styling is expressive and includes standard dual chrome exhaust tips, four alloy wheel designs from 16s to 18s, a panoramic sunroof, chrome trimmings and a sculpted front fascia.
Besides the SX, the Optima is offered in LX and EX trims and comes with three new power-trains, including the brand’s first-ever hybrid in the U.S. (available in 2011). A 6-speed automatic or manual transmission and electric power steering with paddle shifters is partnered with either a 2.4-liter 200 horsepower 4-cylinder achieving 35 hwy mpg or a 2.0 turbo 4-cylinder with 274 horsepower with 34 hwy mpg. We were tasked to drive EX models throughout Orange County, California with its abundance of zippy, swirly roads. The ride was very compliant and power was passable. So I can only imagine the Turbo and its 74 additional turbocharged horses. Keep in mind the Optima’s engine, transmission and platform are shared with its cousin — the Hyundai Sonata — which it also competes against. Talk about a family rivalry!

There’s not anything this vehicle doesn’t do well. So I welcome you to the cockpit, the Optima’s most impressive area. And it’s not incidental! The interior features increased leg room, split folding rear seats, heated steering wheel, cooling glovebox, cooled front seats, rear backup camera, Bluetooth, internal 1-gig jukebox, navigation with a 4.3” color touchscreen LCD, a 12-speaker, 550-watt Infinity Sound System, and UVO aka “your voice” powered by Microsoft which allows the driver to operate the multimedia functions by voice. UVO will also read your text messages. Impressive!

To say the least, the 2011 Optima is sporty, agile and safe. You get six airbags, active headrests, side-impact door beams, Lower Anchors and Tethers for Children (LATCH) and a Tire Pressure Monitoring System (TPMS).  Add four-wheel antilock brakes, Electronic Stability Control, Traction Control, Brake Assist and Hill Assist Control and you may as well compare the Optima to up-level non-competitors.  And imagine a 10-year/100,000-mile limited powertrain warranty and a five-year/60,000-mile roadside assistance plan.

The Optima is so good the only thing I could find to complain about was its flat leather seats. There’s a new paradigm shift in town and they call it Kia Optima. Go figure.