2012 Audi A6: Genuine Inspiration or Business as Usual? 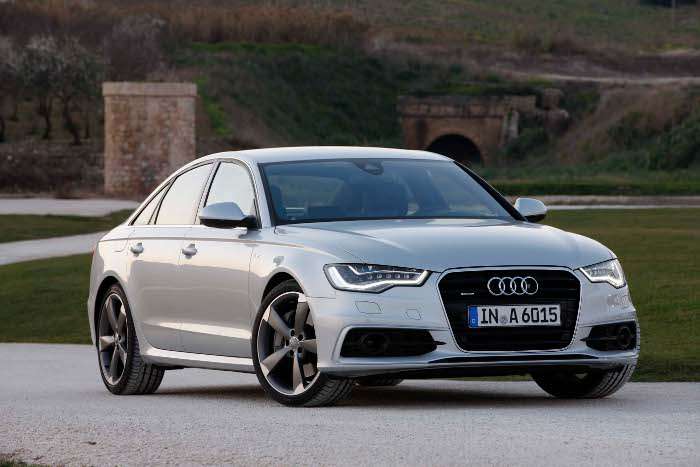 I learned my alphabet at a relatively late age in comparison to today’s iPod and iPad whiz kids. Yet, I inherited the principle of mathematics far earlier than any of my young classmates. In fact, I dominated every numerical calculation with precision throughout my educational career. So what’s the lesson? Comingling the right letter with its corresponding number will manifest a naming convention that represents greatness. A is for apples folks. A is also for Audi, and A plus 6 represents Audi’s heralded, executive sports sedan since 1968 when the 100 was first born.

Winters can be miserable and winters can be aspirational. Back home in Maryland there is snow everywhere. So the day drifts patiently into gloom if you allow it. However, in Sicily, Italy there are wondrous mountains, tight, winding roads, succulent recipes and fresh breezes from the Mediterranean Sea to jolt enthusiasm into your day. There was also the all-new 2012 Audi A6 which Automotive Rhythms was able to sample in every aspect like a football team at a buffet. The German sports sedan represents a technological roadmap of where the brand has been and where it decidedly is headed; undeniably in the right direction.

Upon landing at Palermo airport from Rome my drive partner, Sam Mitani from Road & Track and I headed out on a short expedition to the immaculate Verdura Golf & Spa Resort in Sciacca, Italy. Sam was tired so I was volunteered to drive the entire way, something I didn’t mind since the A6 has always been a favorite in its respective class. But I also like the A5 and A8 and am patiently awaiting an evaluation of the A7 Sportback which goes on sale in May.

The new A6, now in its 7th generation, is similar in length to the outgoing model but an inch wider for additional track, and gains 3” in wheelbase. Upon approach you see that the A6 is a great looking vehicle, but it’s not aspirational. That job is for the A7 and R8. Offered with a choice of 11 hues, the A6 does well in every category including drive, technology, comfort and sophistication. On the contrary, if you select the S-line package, which is part the Prestige model, then the day gets a little sunnier. Sleeker wheels and stronger body molding including the bumper, rear mesh diffuser and side skirts differentiates the S-line from base A6 fare.

Key developments for the A6 include a 15% weight reduction due to the use of 20% aluminum within the body including the hood, doors, and front fenders. The previous model was all steel. Couple that with Audi’s efficient 310 horsepower, supercharged 3.0-liter TFSI V6 engine, a competent 8-speed automatic transmission, and quattro permanent all-wheel drive and immediately you experience the dynamic differences in performance from the 6th generation vehicles. Over 80% of the business will comprise the 3.0 TFSI in the US while a 2.0 TFSI with 211 turbocharged horses and front-wheel drive makes up the rest. Worldwide, Audi has five engines in play for the A6. In the U.S. we won’t see a diesel A6 (will arrive eventually) at launch nor will we get the start-stop system which reduces carbon dioxide and saves fuel. 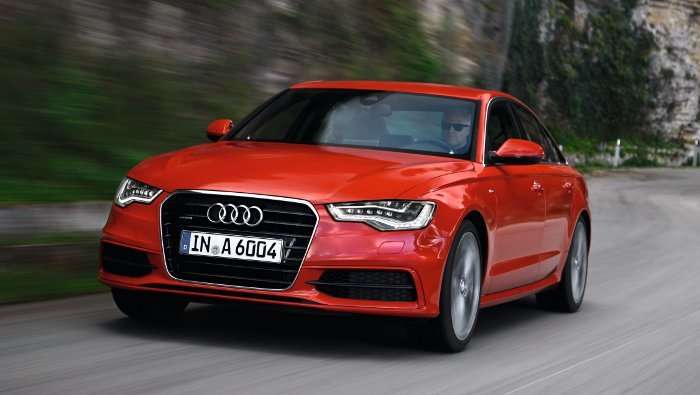 Leaving the airport, a fleet of new A6s headed for Verdura in solidarity playing “cat and mouse” with one another as each driver tested the V6’s power. The sexiest feature of the A6 is the optional $1,400 LED headlights which gives the German a mystic aura when viewing from approach or through the rear view mirror, especially when we drove through tunnels. This lighting system incorporates daytime running lights, cornering lights, highway lights and all-weather lights which replace the conventional fog lights. The all-weather function extends reach by 75% and allows Audi to use the previous fog light slots in the bumper for the two radar sensors for Adaptive Cruise Control (ACC).

Speaking of ACC, the new driver assistance system regulates the vehicle’s speed and acceleration through data input that can recognize complex scenarios. In addition to the two front radars, the A6 incorporates collected information from its video camera, navigation inputs and ultrasonic sensors to evaluate the A6 and other vehicles so it knows what moves to make, including a stop and go feature in city traffic. ACC has four fail-safe modes which all work to prevent an accident with stage four being full braking.

There are myriad active driver systems for the A6, including Active Lane Assist which detects lane markings using video camera feedback. It helps the driver steer back into the lane if the vehicle drifts. It can also tell if the driver’s steering is intentional or not and intervenes accordingly.

Night Vision Assistant is just that, and detects living objects on the road using a thermal imaging camera and marks them in red. The image is projected to the driver in the gauge display and/or the new full color head-up display. An audio alert is also signaled to the driver.

Parking Assistant can maneuver the A6 in both parallel and perpendicular parking spaces. All the driver needs to do is brake and accelerate.

Mostly every A6 operation and setting can be configured in the new generation MMI Navigation Plus. I loved the graphic 8” screen that slides out from the center stack and then up in perpendicular position for standard viewing. It’s an electronic system so content can be custom tailored depending on geographical location. For example, in the U.S., MMI Plus incorporates green, red, or orange lines to represent specific traffic patterns. First released in the new A8, the optional MMI Touch allows the driver to hand draw letters and numbers for vehicle commands to keep eyes on the road. I was disinterested in this function as it seems more of a hassle than needed. Audi also partnered with search engine giant Google for two key vehicle enhancements. The first is Google Earth mapping, which gives vivid and graphic detail of your directions. Really, what is happening on the road is what you see on the screen. However, its guidance did take us off the main road a few times and into washed out farmland roads. Luckily we had quattro or there would have been a problem. Secondly, Google’s search engine can be linked to navigation data for an almost limitless number of options for finding places of interest.

While I continued on our journey to source some delicious Italian food at the resort, Sam searched the Web on an iPad using the A6’s WiFi hot spot. Like the A8 and A7, WiFi can connect up to 8 devices simultaneously. He updated his Facebook status, checked Twitter and even watched a few videos, though buffering was slow. I didn’t mind because the cabin was as comfortable and seductive as all Audis are.

Our Dakota Gray model had unique Beaufort oak wood inlays (resembling a yacht deck), 10-spoke 20” rims, adaptive air suspension, Valcona leather multifunctional seats and steering wheel with paddle shifters, and the optional 600-watt, 14 speaker Bose audio system (standard on the Prestige model). The “cream of the crop” surround sound system is the optional $6,300 Bang & Olufsen system that powers the A6 with 1,300 watts through 15 polished-aluminum housed speakers. Although pricey, the B&O system is one of the best in the business.

Arriving in showrooms this fall, expect the A6’s pricing to stay relatively close to the previous model (just under $50k base) but competitive to the segment’s leaders. Trim lines include the base Premium model, Premium Plus and Prestige. If you’re wondering, Audi isn’t thinking about bringing the Avant back since the wagon segment has been small (in terms of sales) in the U.S. Yet, they will offer a future hybrid consisting of the 211 horsepower 2.0 TFSI engine, a 33 kW electric motor and a lithium-ion battery. What we consider genuine inspiration is “business as usual” for Audi!