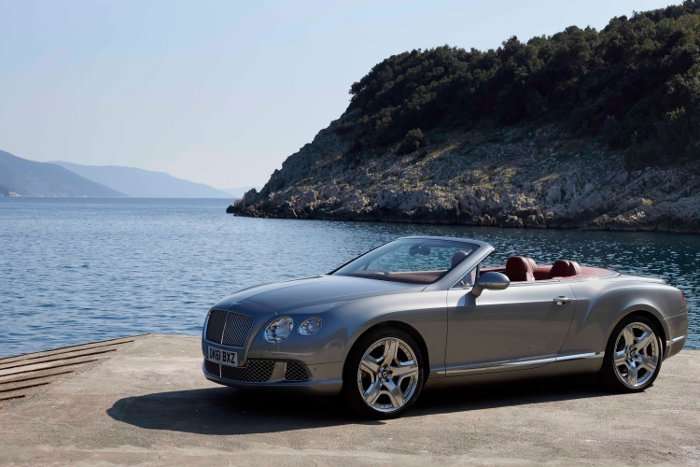 It’s a typical day at the factory in Crewe where illustrious automobiles are manicured, engineered and styled with an artistic sensibility and hand-built temperament. Please, make yourself comfortable with the word “bespoke,” a form of intelligent individualization programming for the manifestation of anything from form-fitting suits to eye-opening car manufacturing processes. Visually internalize it, and Bentley will physically materialize it.

The tour begins with a historical recap of the British automaker’s well-distinguished history in a small, museum-themed atrium that houses a select group of culturally relevant vehicles representing Bentley’s heritage. Customers and media will witness the Brooklands race-day winning 1919-20 EXP2; the 120 mph 1952 R-Type Continental (the fastest 4-seat coupe in its day); or the current day Mulsanne flagship which requires 170 hours by artisans just to craft the bespoke interior. Next we move through the wood shop for a proper understanding of the timely journey and process taken from aging trees to beautiful veneers. For example, log hunters travel 500 miles a day looking for the finest walnut, maple and oak. It takes weeks simply to carve the bark into the veneer sheets that comprise the sumptuous Bentley cabin. Bull hides are then cut, outlined and treated with intense detail. Steering wheels are hand-stitched with the equivalent care a mother gives to her newborn. Ostensibly, the resulting outcome is a chapter or two from the school of automotive artistry and poetry.

The appreciation of the Crewe factory tour prepped me for part two of the monumental journey, which would lead us to Pula, Croatia to experience and drive Bentley’s 2012 Continental GTC. Not long ago this country was engaged in a fierce war. It was all too surreal, since I had just recently watched ESPN’s Once Brothers, an epic tale about deceased Croatian NBA sharp shooter Dražen Petrovi? and Serbian/Yugoslav player Vlade Divac. An undiscovered landmark on the European map, Croatia is full of energetic tourism and is geographically one of the most extraordinary locations I’ve ever laid eyes on. Our stay in Rovinj at the Hotel Montel Mulini off the Adriatic Sea was a picture perfect rendition of what you would see on the Travel Channel. Croatia is also one of a few parts of the world where you can find delectable truffles due to the soil and weather. Actually, the world record for the largest truffle was recorded here.

On the eve of our drive tour through Croatia, the Bentley staff opened the floor to their Chairman and Chief Executive, Wolfgang Dürheimer, who emphatically briefed us on the company’s positive outlook and growth, and to present the second generation Continental GTC. He spoke with great passion and vigor. And since driving the $212,800 super convertible, I can truly relate to his enthusiasm. Simply put, the GTC is open-top luxury redefined.

It’s been five years since the first GTC was launched, so you can imagine the amount of new technology and sophistication instilled into every aspect of the vehicle. The formula begins with a 6-liter, twin-turbocharged W12 engine with 567 horsepower and 516 lb.-ft. of torque available up to 2000 rpm. W.O. Bentley came from a railroad engineering background and preferred powerful, high capacity and unstressed engines. Today, the company is still keen in keeping with this philosophy, though an 8-cylinder will soon be on the way, affording Bentley a better marketing position to attract new customers. The GTC’s rapid acceleration capability was evident when we needed to pass several slower moving vehicles on open roads. Like tennis phenomenon Serena Williams, the engine to vehicle size combination is utterly powerful, quick and a bit intimidating; while also being simultaneously charming and tranquil. It is possible to achieve 11 city and 19 highway mpg in your GTC, which can also operate on ethanol fuel, though mileage will decline somewhat. Full-time AWD is standard, as is the new QuickShift transmission (borrowed from Bentley’s Supersports models) that allows for double downshifts. Track width has been increased and available 21” wheels added to empower the GTC with a dominant stance. A programmable air suspension and adjustable springs (comfort or sport) allows the driver to manipulate the vehicle’s ride quality to his or her liking. Additionally, the torque split has been altered from the traditional 50:50 to 40:60 front to rear for more performance oriented acceleration. Top speed is set at 195 mph and 0 to 60 mph clicks off in 4.5 seconds — similar numbers to some of your favorite two-door sports cars!

Overall, the 5,501pound GTC is 150 pounds lighter, 3/10s of a second faster and structurally stiffer than its predecessor. Its lines are more distinctive and flowing, including a new front fascia. My favorite color combination was the granite grey exterior and merlot soft-top (7-bow construction with 3 fabric layers) with a matching leather cabin. It was truly wondrous. The interior offers the availability of 17 various hides and 7 unique veneers. And as Bentley would say, “everything that looks like metal, is metal.” For example the dandy organ stops that control the vents. My experience at Crew gave me a deeper appreciation for the GTC when I sat inside — smelling the leathers, massaging and caressing the polished textures and surfaces throughout. The four-seater luxury convertible is quite comfortable up front due to new seat designs with a massage function and an integrated Neck Warmer. They are also narrower, allowing for additional rear legroom. The back seat spacing is the only aversion that I could find, since it would not be enjoyable for a full size adult to spend a long period of time in.

There was little enjoyable music on the Croatian radio stations, so I plugged in my iPhone and let the base vibrate through the high-end Naim audio system. A convertible must have powerful sounds and this one does, employing defense technology utilized for helicopter sound deadening. Not only that, but the 8” navigation touchscreen is enhanced by Google Earth, so there was no chance of becoming lost in a foreign country. I was quite amazed at the detailed graphics. The second set of “turn by turn” instructions that appear in a micro window over the comforting steering wheel is a definite plus. All of the vehicle’s key operations may be set-up by touch on the new screen. It’s good to see Bentley advancing into the world of connectivity which seemed to be previously ignored by the iconic British motoring company. Perhaps their Mulsanne Executive Interior Concept with its video conferencing, multiple iPads and Mac Mini is the ultimate link to modern connectivity.

Back on the road, time is moving slowly as I take in the beauty of the region and the exquisiteness of the GTC. The strong wind and fresh air infuses my thought processes. If I were to deliver a discourse on the new Continental GTC, it would go something like this. “The Winged B: Its immense merits are sure to leave an inspirational imprint on the entire luxury market. Simply put, it is fluent in excellence.” Sadly, it is now time to board our jet home. Until we meet again.