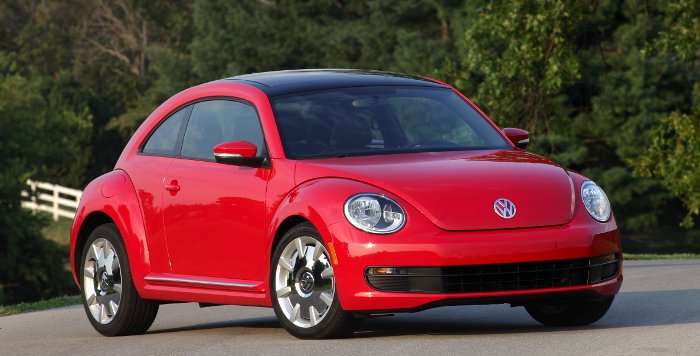 The original Beetle or “People’s Car” was produced between 1938 and 2003, and with 21.5 million sold worldwide, it ranks as the most successful single platform car design ever. When the “New” VW Beetle first appeared on the scene in 1998 it was viewed by many to be a “chick car” and not really registering on the macho scale at all. Despite that perception, the new Beetle is now considered an iconic vehicle.

For the 2012 model year, the third-generation Beetle becomes an icon revisited, representing a modern interpretation of what has unquestionably become a classic design, while dropping the “new” prefix and being dubbed simply the Beetle or Turbo Beetle. A TDI Clean Diesel will become available later in 2012, which may well be the most fuel-efficient Beetle ever produced.

Make no mistake, this latest iteration Beetle’s styling has not fallen far from the new Beetle’s design tree, and while still serving up new Beetle DNA, there are some major modifications. It appears in a longer, lower (but still with plenty of head room) and wider form, with a noticeably sportier, and perhaps more masculine stance. In Hot Rod speak, it takes on the image of having a chopped top and channeled body, while delivering no compromise German engineering. The hood is longer and the windshield is set further back with a more pronounced rake. A new standard feature on the 2.0 Turbo is the integrated rear spoiler – painted black on top and body color underneath. It will certainly lend itself to individualization or personal customization. In terms of dimensional changes, the 2012 Beetle is 3.3-inches wider, 0.5-inches lower and 6-inches longer than its predecessor. The car’s front and rear tracks have been increased as well as the wheelbase.

There are two power sources for the Beetle in 2012: the base Beetle draws its power from a 2.5-liter, inline five-cylinder with electronic fuel injection, while the Turbo Beetle moves down the road powered by a 2.0-liter, turbocharged and intercooled, electronically fuel injected four-cylinder engine. The base model’s engine produces 170 horsepower at 5,700 rpm along with 177 pound feet of torque at 2,250 rpm while the turbo Beetle delivers 200 horses at 5,100 rpm while generating 207 pound feet of torque at 1,700 rpm. Both Beetles’ liquid-cooled engines are mounted up front and drive the front wheels via either a six-speed manual or 6-speed DSG automatic with paddle shifters.

Inside, styling, ergonomics and quality work together creating a new friendly atmosphere with a highly individual nature. The shapes and use of color of the painted or carbon fiber-look dashboards are reminiscent of the first Beetle. Three round gauges are centered in front of the driver, including a tachometer, speedometer and fuel gauge, that provide all pertinent information at a glance. The speedometer incorporates a multifunction display and the steering wheel is designed with optional painted spoke accents, depending on the equipment line. Another option is the audio/navigation system. In similar fashion to the original Beetle, there is an extra glovebox integrated into the dash.

Despite the lowered roofline, the 2012 Beetle actually provides an additional 0.4 inches of headroom and the trunk space is significantly larger, with 29.9 cubic feet when the rear seats are folded flat.

During VW’s North American 2012 Beetle launch, I was able to pilot both the Beetle and Turbo Beetle, but spending the most seat time in the Turbo version – my favorite which represented the loaded end of the spectrum and priced at $29,865 and sporting a Silver metallic exterior and Black interior.

Quite obviously my pick of the litter was the Turbo Beetle with the DSG automatic and paddle shifters, while the base model Bug performed quite satisfactorily. Both models share the same basic platform and dimensions – only the engines and rear suspensions are different.

The 2012 Beetle and Turbo Beetle are both considerably more planted than their predecessors. Acceleration is adequate in the Beetle and much more than adequate in the Turbo – not blistering off the line mind you, but should the Turbo show signs of bogging down under load, simply blipping the paddle to downshift, spools things up quite nicely.

Both the ride quality and handling characteristics are vastly improved, delivering enhanced performance qualities all around. Bottom-line, the 2012 Beetle lineup is ready and able to serve up broad smiles and greater levels of driving satisfaction.