2013 Ford Escape: Thinking Outside the “Box” 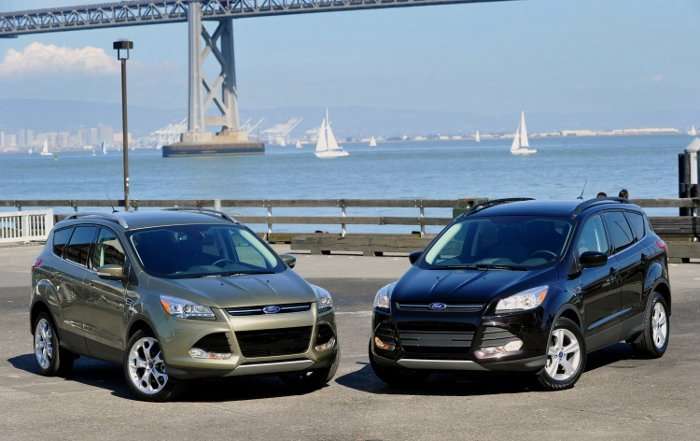 Home of the Golden Gate Bridge and the ever-ominous Alcatraz, San Francisco set the perfect backdrop of beauty and excitement for our test drive of the all-new Ford Escape. The playful crossover SUV has received an Oscar worthy, movie star makeover for 2013 with a sleeker exterior design, longer wheelbase, wider cabin and much more luxurious interior design. Departing from Ford’s traditional design base, the crossover has a definite “fun” factor not traditionally associated with the conservative automaker’s previous crossover vehicles.

The Escape has received quite a few nips and tucks with improvements both inside and out. The 2013 version is not only sleeker, but also much savvier. The Escape’s “Intelligent 4-Wheel Drive” puts 35% to 80% of its torque to the rear wheels, and constantly evaluates road conditions to correct oversteer or understeer in tight or fast off-ramps and curves, resulting in superior handling. We were able to put this feature to the test throughout our long adventure with impressive results on the twisting back roads of San Fran’s hilly terrain. Ford says the system operates at speeds 20 times faster than the blink of an eye.

The 2013 version also marks the beginning of the 4-cylinder Escape era. Patrons now have a choice of three four-cylinder engine options, the 2.5-liter engine at 168-horsepower, the turbocharged 1.6-liter “EcoBoost” four cylinder that produces an impressive 33 miles per gallon on the highway, or those with a need for speed can opt for the 2.0-liter, 240-hp turbo EcoBoost engine. FYI, EcoBoost combines turbocharging with direct inject to produce more power and efficiency. All engines are paired with a six-speed SelectShift Automatic transmission that allows the driver to manually shift the gears through a switch on the steering. Yet, the EcoBoost transmissions are tuned more specifically to handle the additional power and torque.

In addition, tech heads will love that the signature “SYNC with MyFord Touch” now includes Apple iPad connectivity and access to Audible.com audiobooks through voice commands or the touchscreen. The revamped interface is touted to be easier to navigate with larger fonts and improved touchscreen response time; however, I still had trouble with the basics like switching back and forth between the navigation screen and music channels. Technologically challenged individuals such as myself will have to spend extra time experimenting with the new features, but most are pretty straight forward if you read the directions.

Impressive cornering: I felt in complete control navigating the winding roads of Napa Valley and the roomy cabin and plush padding for both front and back seat passengers made for a pleasant driving experience. I especially loved how the window designs gave a panoramic feel with the extended windshield and the fact that Ford has banished the “boxy” feel of its predecessor for this curvier, sportier version. 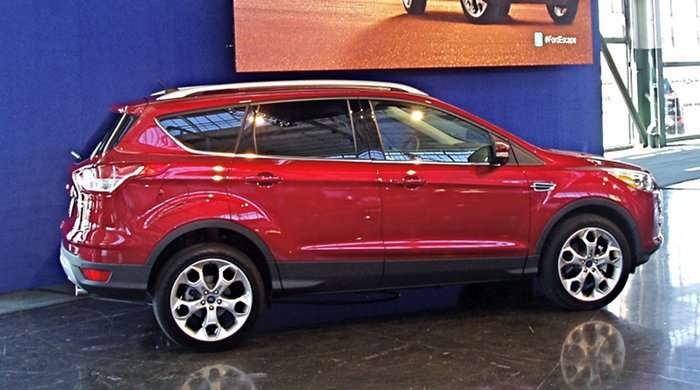 Hands down, the “hands free” lift gate was my favorite new feature. As long as the key fob is in close vicinity (it even works through your purse or pocket) you can open the rear lift gate by waving a foot beneath the rear bumper! I can’t tell you how many times I approached my car with arms filled with groceries, car seats, etc. only to have to fumble to open the lift gate, dropping oranges, bags and other life essentials in the process. As well, the rear seats fold flat and the cargo floor is configurable in two various positions to optimize space.

Did I mention the Escape nearly parks itself with Active Park Assist and warns you if another vehicle is in your blind spot using BLIS (Blind Spot Information System)? Impressive!

I really enjoyed my time in the new Escape while touring San Francisco. It feels like home with its perfect, quaint size, edgy styling, and driver amenities for city or suburban living. Now only if I can take the domestic crossover with me and Escape to an island for that much deserved vacation!