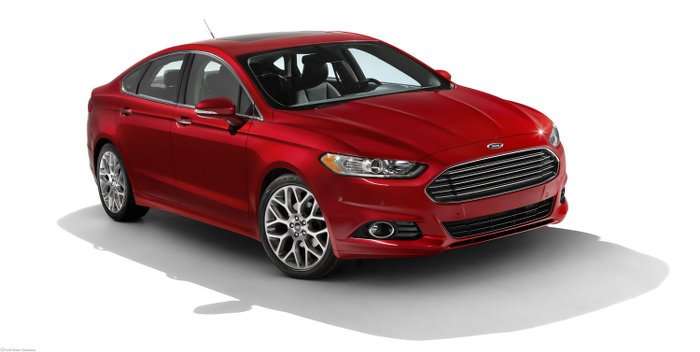 Detroit, MI – Ford Motor Company recently offered automotive journalists a sneak peek at several of their new products to be unveiled at the North American International Auto Show (NAIAS) in Detroit. The most impressive, and perhaps the most stunning, was the all-new, midsize Ford Fusion sedan, slated as a 2013 model year vehicle, which signals the next generation Ford Mondeo for the global marketplace. It is unquestionably the most beautiful Ford Fusion ever to be produced, showcasing the “New Face of Ford” that will dominate and influence future company vehicles.

Not only is the new Fusion the most passionate Fusion in history, it may well be the most alluring passenger car to be produced by Ford in recent years – okay, Mustang is another story. Derrick Kuzak, group vice president of Global Product Development pointed out that “Our vision for Fusion was clear – deliver the very best of what ‘One Ford’ stands for. We brought our global teams together around a blank slate with the charge to develop a midsize car with ground- breaking design and jaw-dropping fuel economy – one that featured technologies to help make our customers safer and better drivers. This car is the result.”

The 2013 Fusion is based on an all-new chassis, with all-new suspension componentry in what Ford refers to as their global CD segment platform. The body structure is stiffer, which adds to the car’s operational stability, thanks to a ten percent increase in the use of high strength steel. It is the first sedan to offer gasoline, hybrid and plug-in hybrid powertrains, each with top fuel economy expectations. Fusion will be available in S, SE and Titanium trim levels.

The frontal styling bears a strong resemblance to Aston Martin and perhaps leaning a little to Jaguar’s influence as well, with the bold new grille design, that features a chrome upper and a Black finished lower section. The car’s character lines are more indicative of a fine sculpture. The Blue Oval logo is now positioned flush on the hood with an embossed treatment, rather than in the grille. Sculpted lines are in evidence, running between the stretched headlamps from the front spoiler and lower grille, up through the hood to the “A” pillar and on toward the integrated rear decklid spoiler. In profile, the new Fusion takes on the look of a racy coupe with both the “B” and “C” pillars blacked-out and outlined by a chrome trim surround. Side mirrors are now mounted on the door rather than the “A” pillar as before. LED taillamps are expressive units that ride above the rear bright exhaust tips that protrude from a gloss black diffuser panel with Titanium trim. All lines and mass forms appear as perfectly balanced and proportioned elements adding to the car’s elegant yet sporty stance.

The exterior surface exudes an athletic presence and feel, with the overall design of the Fusion greatly influenced by Ford’s earlier Evos concept show car. The drag coefficient is below 0.27, making the Fusion quite slippery in terms of aerodynamics, which are aided by underbody shields. The car rides on stylish

8-pedal-spoke alloy wheels, made up of 8-“Y”-spokes, that fill up the pronounced wheel wells. 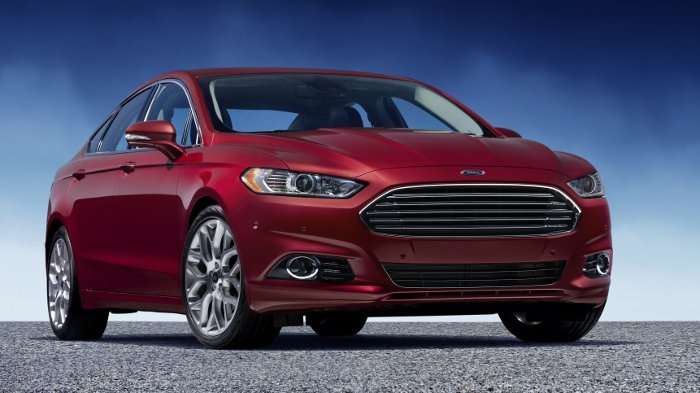 Moving to the inside, the interior elements complement the exterior styling theme, with smooth flowing lines wrapping around all of Ford’s high-tech connectivity and infotainment systems and controls. Seats are thinner, yet more comfortable and supportive than before. The interior ambience is improved by the implementation of Active Noise Canceling and acoustic enhancements.

Ford offers the “Power of Choice” for the elegant and sexy new Fusion, with a 2.5-liter 4-cylinder engine with sequential multiport fuel injection; a 1.6-liter Ecoboost 4-cylinder capable of 37 MPG; a 2.0-liter Ecoboost 4-cylinder delivering 33 MPG; a Fusion Hybrid with 47 MPG capability and also featuring a 4-cylinder engine; and finally, a Plug-in Electric Fusion Energi that can achieve a fuel economy equivalency rating of 100 MPGe. The 1.6-liter is Front-wheel Drive, as is the 2.5-liter, while the 2.0 EcoBoost is also available in AWD The 1.6 mates to either a manual gearbox, or a 6F35 six-speed automatic transmission (the first automatic-transmission Ford product offered with an automatic start-stop system), while both the 2.5-liter and 2.0-liter EcoBoost change gears via the six-speed auto – the latter being a SelectShift version. Both the 1.6-liter and 2.0-liter EcoBoost engines feature Direct Injection.

The Fusion Hybrid draws its power from a 2.0-liter Atkinson Cycle gasoline engine in combination with a Permanent magnet AC synchronous motor linked to a Continuously Variable Transmission. The Fusion Energi features the same powertrain, but is a plug-in electric vehicle. All 2013 Fusion models are based on the same platform architecture and share the same dimensions except curb weight.

The 2013 Ford Fusion lineup appears to be all encompassing, designed not only to display an exceptionally appealing exterior and interior, but also to perform in a spirited, yet efficient and Eco-friendly manner. If the Fusion drives and handles as well as is promised and expected, Ford has come up with a clear class winner. We’ll let you know when we’re able to experience seat time behind the wheel!

PrevPreviousVolkswagen Continues March to the Top
Next2012 Mazda CX-9: When staying the same is a good thing!Next