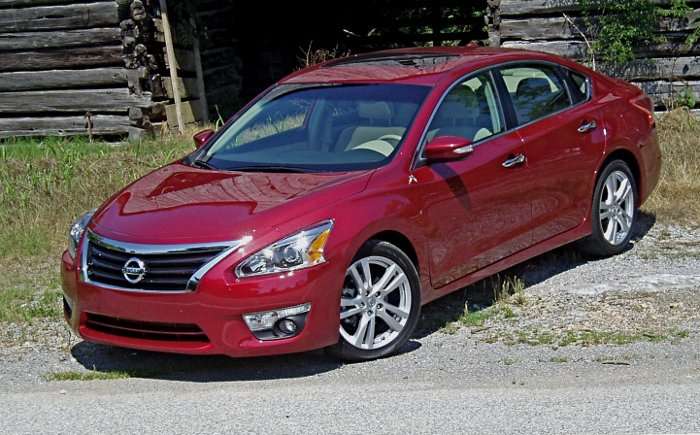 After two decades, Nissan’s top-selling model, the Altima, enters its fifth generation with an all-new model lineup that includes 6 specific choices, with two engine options and two distinctively different feeling Continuously Variable Transmissions (CVT). Three models are powered by a 2.5-liter, inline four-cylinder engine and include a base model, an S model and an SV model with three available option packages: the Convenience Package, a Navigation Package and a Technology Package. The 2.5-liter powered models begin at $21,500 and all connect to an XTronic CVT gearing power to the front wheels.

The remaining three models draw their motive force from a 3.5-liter V6 that drives the front wheels through an XTronic CVT that features a manual shift mode with column paddle shifters. The trim levels include: a 3.5 S; the 3.5 SV and the top-of-the-line 3.5 SL. 3.5-liter model pricing starts at $25,360. And there are two option packages available: the Navigation Package and the Technology Package.

Both engines are transversely mounted up front, and are fed by sequential multi-port electronic fuel injection and four valves per cylinder with CVTC. The 2.5-liter four-banger makes 182 horses along with 180 pound feet of torque, while the 3.5-liter engine delivers 270 horsepower and 258 pound feet of torque. The 2.5-liter engine delivers 38 mpg in highway driving without added eco mode charges as with some manufacturers.

The interior displays a sophisticated execution with NASA-inspired ‘zero-gravity’ seats that aids in the increase of blood flow, decreased muscular load and a lower fatigue factor. There’s also an advanced Drive-Assist display that appears between the tachometer and speedometer.

I was able to experience a 2013 Nissan Altima 3.5 SV finished outside in Cayenne Red and inside in Beige cloth, with a base price of $27,780 and a final sticker of $29,230 after adding a rear spoiler, splash guards, floor mats and Destination and Handling on a drive from Nissan’s headquarters in Franklin, Tennessee to Lynchburg, TN. The return from Lynchburg to Franklin was done in a 2.5 SL model – also with a Cayenne Red exterior and Beige interior, but in leather. Its base sticker read $28,050 while the final tally came to $29,500 after factoring in the same options and D&H. Both vehicles were prototypes and not production vehicles.

SUMMARY: Nissan’s Kamishino design philosophy employed in producing the 2013 Altima models delivers a rewarding visual appeal in a vehicle that is longer, wider and lower, while maintaining a similar footprint to its predecessor. It is the most innovative Altima ever. It is also quieter, with enhanced and improved insulation.

Driving the 2.5-liter version seemed to deliver totally adequate acceleration except in extreme situations, such as passing in a hill, and the lack of a stepped CVT and manual control paddle shifters proved a bit of a disappointment. The 3.5-liter powered Altima on the other hand, provided a more pleasing level of power with less effort, and the stepped, manually shifting CVT was closely akin to driving a conventional automatic with the same properties. The CVT belt represents a 40 percent reduction in friction, and is expected to last for the life of the car. I personally preferred the 3.5 SV over the 2.5 SL except for the cloth seating, and it was $270 less.

The 2013 Altima is one of five all-new models being produced by Nissan over the next 15 months. The Nissan Altima goes on sale in early July, with Pathfinder and Sentra bowing this fall followed by a volume hatchback and a volume crossover.