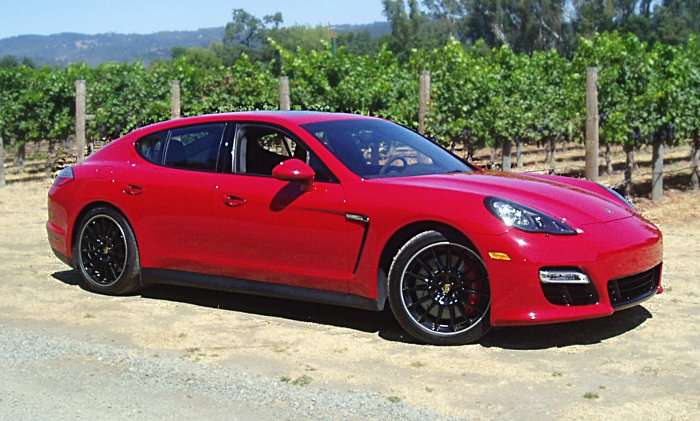 Upon first hearing of Porsche’s intention to build a four-door sedan, I wondered “Who in the world would want a stretched Porsche 911?” Initial photos of the Panamera, as it was to be named, were not particularly flattering, so my skepticism grew even further at the concept of such a vehicle. Okay, I entertained the same degree of doubt when the Cayenne SUV was first introduced to the stable of the legendary German automaker, who, had previously only specialized exclusively in the production of highly revered sports cars.

As it turned out, I was wrong in my view on both counts. In the case of the Cayenne, which comes in a variety of models and trim content, highly successful sales have enabled Porsche to grow ever more popular as a marque, and to bolster its coffers, supporting future R&D.

The Porsche Panamera bowed displaying 911 DNA from both the front and the rear on some level, but with a stretched profile. It was not however, simply a 2 plus 2 seater, nor was it simply a stretched 911. The resemblance however, was not coincidental, as Porsche’s goal was to focus on, and to emphasize, luxury without sacrificing the marque’s instantly recognizable identity and performance capabilities.

The Porsche Panamera was first available in three specific models: Panamera S; Panamera 4S; and Panamera Turbo. All were powered by a 4.8-liter, water-cooled V-8 mounted up front (what was up with that?). The S and 4S versions were naturally aspirated and featured Direct Fuel Injection generating 400 horsepower along with 369 pound feet of torque. The Panamera S was a rear-wheel drive model, while the 4S was all-wheel drive. The Panamera Turbo added twin turbocharging to the equation, and delivered 500 horses along with 516 pound feet of torque, and was also all-wheel drive. All three models incorporated Porsche’s innovative seven-speed Doppelkupplungsgetriebe (say that five times rapidly – PDK is easier) double-clutch automatic gearbox with steering wheel mounted paddle shifters.

The Panamera’s lightweight monocoque body is executed combining steel, aluminum and magnesium, with all body panels executed in aluminum. It was Porsche’s first true sports car built from the ground up for four passengers (yes, I know that there have been rear jump seats in other earlier models, but they were anything but comfortable). The Panamera is a genuine Porsche sports car, with all the inherent performance properties, but it is also a luxury Grand Turismo to boot, all in one, with comfortable accommodations for four full sized adults.

The exterior is totally striking when viewed in person – as already mentioned, photos don’t really do the Panamera justice. And, if you aren’t enamored with it at first, it has a strong tendency to grow on you. Panameras are lower, wider and more aggressive than competitors thanks to their thoroughbred sports-car heritage.

The Panamera displays a classic four-door design in a unique interpretation, with the advantages of its variable space concept in a truly unmistakable appearance that defines its individuality. The silhouette displays a compact front overhang. The roofline design with its curved contour flowing gently to the tail section truly makes it out to be a Porsche. From the rear, LED lights with individual light chambers taking up the side-line of the car and graphic horizontal imagery, emphasize its width at night.

Traditional Porsche themes are reinterpreted and incorporated, providing a dynamic and powerful appearance while reflecting a philosophy applied on the Boxster, Cayman and Cayenne models, despite the very generous interior accommodations and layout. Up front, a low air intake instead of a traditional grille, powerfully curved front wings that rise above a low hood creating the “topography” of a sports car and its characteristic headlights, Panamera clearly presents itself as a Porsche.

The Panamera GTS is based on the Panamera 4S and comes with more power, upgraded brakes and a body lowered by ten millimeters, with new, sportier chassis tuning coupled to Air Suspension and Porsche Active Suspension Management (PASM). The GTS version of the Panamera also gives notice that it is perhaps the sportiest of all Panameras by its awesome exhaust note, In the looks department, the GTS displays distinctive styling features up front, at the sides and aft, along with menacing black highlights. The interior theme matches the aggressiveness of the exterior appeal with adaptive sport seats, a SportDesign steering wheel with shift paddles and an exclusive GTS leather interior with Alcantara surfaces.

Power for the Panamera GTS comes from a modified 4.8-liter, naturally aspirated DOHC, 32-valve, Direct Fuel injected V8 with valve timing and valve stroke variable on intake side (VarioCam Plus); and hydraulic valve play compensation. The engine cranks out 430 horsepower at 6,700 rpm along with 384 pound feet of torque at 3,500 rpm. Motive force is delivered via Porsche’s Seven-speed Doppelkupplungsgetriebe (PDK) double-clutch automatic gearbox. to all four wheels, courtesy of a permanent all-wheel drive system. With Porsche’s Sport Chrono package, the seven-speed PDK gearbox transmits the engine’s output to the all-wheel drive system during gear changes with any interruption to the flow of power, which enables the GTS to hurtle form 0-60 mph in a scant 4.3 seconds, continuing on to its electronically limited top track speed of 178 mph. Launch Control is available at the touch of a button with Sport Crono.

A highlight of the Panamera aero package is an adaptive spoiler at the trailing edge of the rear window that deploys at a speed of 56 mph automatically adjusting to the optimum angle as a function of existing road speed. The four-part spoiler, taken from the Turbo model, features a two-piece upper section that moves up and out, increasing its width in order to make the spoiler larger and more efficient.

My test Porsche Panamera GTS came finished in Carmine Red, with a Dark Charcoal-toned interior accented by piano black trim pieces on the dash and doors. The base sticker read $111,000, while the final total came to $174,175. $138,515 after factoring in all the options.

The Panamera GTS is more than enough car for all but perhaps the serious accomplished and experienced racer. It may certainly be driven successfully in a race scenario, but for non-racer types such as myself, it also serves up a higher degree of creature comfort and convenience features and equipment, with the potential to transport four full size adults and their luggage. Okay, I know that purists will protest, given that the 911 Carreras are rear-engined craft with flat horizontally-opposed six-cylinder engines, while the Panamera lineup represents a horse of an entirely different color with a V-8 engine positioned up front.

The 2013 Panamera GTS is without question, a comfortable, and most capable vehicle at high speed on a challenging and technical racecourse, incorporating the added stability and traction provided by the Active All-Wheel Drive. The Panamera GTS may well be thought of as the purest version Panamera in the entire lineup based upon Porsche’s sports racing heritage, and while certainly track capable, the GTS is also a pleasant boulevard or freeway cruiser, showcasing killer good looks. Its potential exceeds the capability of many drivers, and despite the fact that I was at first doubtful of the Panamera’s fit into the Porsche scheme of things, you may count me in now as a true believer. In fact I’d love to possess a Panamera GTS for my very own. To ensure its dfferentiation from the rest of the Panamera clan, the GTS features front brushed aluminum door sill entry guards with Panamera GTS lettering, and GTS lettering also adorns the instrument cluster and embroidered headrests. The exuberant Sport-tuned exhaust note when set in Sport mode is enough to warm anyone’s heart, and the GTS is velvety smooth.