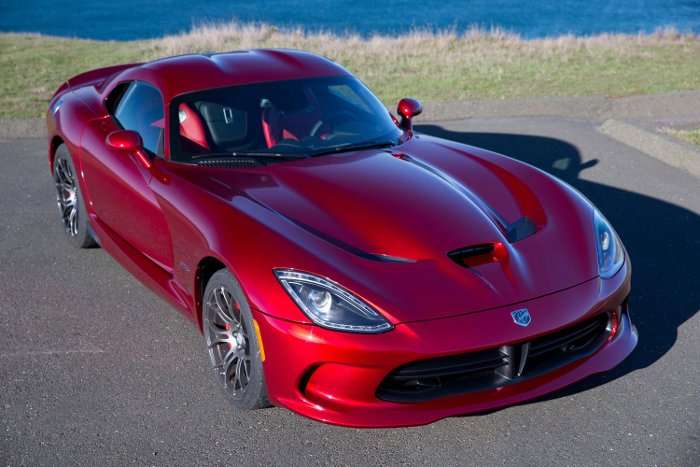 Storming out of the depths like a bat out of hell, the 5th generation, hand-built Viper returns with an entrance greater than the strength of an ox, faster than a 2-year-old steed, and as agile as a cheetah on the hunt. Its unwavering reputation since 1992 with weekend warriors and race fans is now more defining than ever, with the heightened level of power, technology, and intelligence instilled in its DNA code. Welcome ladies and gentlemen to a new breed of American born supercar stardom.
[hana-flv-player
video=”http://video.automotiverhythms.com/VFCz9WpN3S4.flv”
width=”640″
height=”480″
clicktarget=”_blank”
player=”5″
autoplay=”true”
autorewind=”true”
skin=”mejs-wmp”
/]
As if the theme song for Detroit’s “Native Son” Kid Rock kicked in from his new album Rebel Soul to Let’s Ride, Street and Racing Technology (SRT) brainstormed with Ralph Gilles, Chrysler designer and President and CEO of SRT and Motorsports, Chrysler LLC to unleash one of the baddest and most inimitable raceway ready sports cars on the market. Coming in the form of the 2013 SRT Viper and SRT Viper GTS, the SRT team successfully surmounted the challenge with a vehicle that is 32% lighter in body weight when compared to the last Viper, which was produced in June of 2010. Technology materials typically seen only in Italian performance vehicles has now made its way into the new Viper. Carbon Fiber, aluminum and composites comprise the high-tech and aerodynamic shell as well as many parts in the cockpit. The Papa Bear of the SRT family, the flagship Viper will see small manufacturing numbers of 2,000 or so vehicles annually with an array of distinction including eight exterior colors, seven wheel packages, stripes in three hues and two models. In the past, options were extremely limited, and Ralph pointed out that Viper is now profitable for the first time and sees no need for chasing Corvette in terms of sales volume.

I recall some time ago having driven an earlier Viper from D.C. to Jersey just to take my mother for a spin. It was without doubt intimidating to drive, due to its raw power and lack of traction control. I had heard stories about how easy it was to wreck and certainly didn’t want to add to those statistics, so I drove it like a stroller on open roads, but played around more aggressively in abandoned parking lots. Even Smokey the Bear would have appreciated the smokescreen from the burning rubber. Yet, my mother didn’t value the severe burn and resulting scar on her calf from the infamous side pipes. That hazard has been eliminated in the 2013 model Vipers. A recent test drive at California’s Sonoma Raceway (formerly Infineon Raceway) and its surrounding regions educated me on all the fascinating upgrades and technologies with this vehicle. For years SRT knew about the beastly GT’s flaws and worked on them tirelessly during the car’s two year hiatus until it was finally ready to launch anew. The result is a rethought machine with the guns (biceps) to prove its newfound worthiness. Now what the team must do is to re-educate the performance market on not only the new capabilities of the Viper, but debunk many discerning and negative conspiracy theories. For example, one of the many popular myths SRT quickly addressed was the argument that the formidable Viper engine is truck based. Nope, it never has been and certainly is not now!

Speaking of the powertrain, the heart and soul of the Viper is its powerful 8.4-liter all-aluminum V-10 engine. Positioned as a mid-front mounted unit, it entered the ring 25% lighter yet stronger with 640 horsepower at 6,150 rpm and 600 lb.-ft. of torque at 4,950 rpm. That’s 40+ in each respective category from the prior generation V-10. Its new aluminum x-brace for stabilization is a signature of the red and black motor. An improved Tremec TR6060 6-speed manual transmission with shorter throws is assigned the duty of transferring all that power to the rear wheels. What does this translate too? A magnificent experience on Sonoma Raceway with its combination of short and wide turns and long enough straights to fully understand the demeanor of the 2013 Viper. Never did the vehicle fishtail out of obscurity, nor did it shift abruptly. SRT challenged us to rip the entire track in third gear, which I tried twice, but there is nothing like shifting a torque heavy supercar while its mighty V-10 mill rumbles in the jungle. On the wider turns I tried to shake it intentionally, but you have to counter-steer pretty hard to set up a drift reaction. This could be due to a number of new improvements such as the 50% stiffer chassis, the addition of an electronic multistage stability control system which kicks in when smooth driving is forfeited, as well as a wider front end where the Pirelli P Zero 295/30 ZR18 front radials are off-set to parallel the width of the massive 355/30 ZR19 rear wheel and tire package. These tires proved to be extremely grip happy – even when we headed out in the morning cold they felt sticky. Due to the innumerable short turns there were many instances to experience the stopping power of the 14” front and rear vented discs fitted with Brembo calipers.

Fanatics will be happy to note that the GTS features a 2-mode suspension for comfortable street driving or firm track racing. Additionally, its stability control/traction control system has four modes (Full-on, Sport, Track, Full-off) as opposed to only two modes in the base SRT model, which starts at $97,395. I didn’t however find the street mode on the $120,395 GTS any more comfortable for a daily drive. I would give myself an hour before cabin fever set in. Inexorably, the Viper belongs on the circuit, in a race environment. Especially when the optional Track Package is selected, which changes the rims, tires and brakes while reducing the weight by 57 pounds! Another key difference between the two models is the amount of sound deadening packaged between the passenger and those extremely wide rear wheels, which are only 5” to 6” away from the seats. Road noise was quite disparate between the two passenger ride experiences.
So by now you’re probably wondering what the superlative performance specs of the SRT Viper are. Sorry for the delay!

So as you see, even when commuting around town it is easy to run up on 127 mph in a short distance as I did. It doesn’t take long to ascertain that the Viper is just vicious! And since track time was involved it was pointless to continue down that path on public roads, so I enjoyed the new tech-savvy and custom stitched interior while putting full intel in the control of the Viper’s Uconnect multi-media system with its 8.4” screen. Keep in mind this Uconnect is the latest rendition in the Chrysler family and is ranked within Automotive Rhythms’ top three behind BMW’s iDrive and Audi’s MMI. A partnership with Sprint will allow the owner to utilize various apps and search Bing for places of interest. Included are HD Radio, SIRIUS/XM with every MLB game, 26 news stations and 12 Latino stations, voice features, a replay mode which records your favorite song in the background, a game zone to keep updates and alerts of your favorite selected team. For example, it would alert me if my Eagles finally let Andy Reed go. Typically, we do not favor touchscreen systems, but Uconnect has a large screen and big user-friendly icons, making it simple to use.  Its navigation now has 3D graphics with landmarks rendered exactly as actual buildings appear. Lastly, the system outputs detailed charts of your SRT performance stats and allows you to send results to your friends. All this in a supercar! Go figure. I was curious however, as to why Navigation is not standard in the base SRT model yet comes standard with the GTS. At that price point, I shouldn’t have to pay more for Nav. Lastly, Sprint 3G WIFI can be ordered to allow you to connect external mobile devices for an additional charge. The GTS further separates itself from the SRT with power adjustable seats and a rear view camera. Both share the thick, flat bottom steering wheel which remains the same size as the outgoing model.
Minor quibbles include the shallow door map pockets and the too-close-for-comfort pedals, including the dead pedal that sometimes had me accelerating as opposed to braking. They are more suited for heel-and-toe. So please don’t expect to wear boots when driving your SRT supercar.? Other than that, the new Viper is a brilliant sports car that exudes emotional stimulation in every aspect while offering technology of the modern world.  It’s a Rebel Soul from Detroit, so what else would you expect?