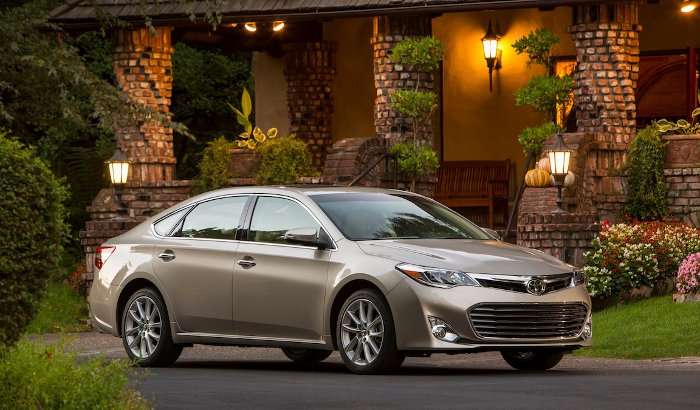 Since 1995 the Avalon has been Toyota’s most elite sedan and fills the role of the company’s flagship as they head into a new generation of product and technology advancement. So, as the story goes, this 4th generation 2013 Avalon represents a new rendition of the popular Toyota that will hit showrooms next month in time for holiday auto purchases. Competing in the premium mid-size segment, Toyota expects 80% of shoppers to buy into the V6 gasoline engine powered models, with up to 20% opting for the hybrid version.

First seen at the New York Auto Show this past spring, Automotive Rhythms had a chance more recently to thoroughly delve into the Avalon’s new features in San Antonio, Texas where we could not have asked for better weather. My father-in-law owns the current generation Avalon and loves everything about the big sedan, even though it has no emotional styling whatsoever. But, that’s not what he was looking for. Perry wanted a driver-oriented vehicle with major comfort. Toyota most likely appreciates the resounding endorsements from Perry and other baby boomers, but internally it was deemed time to move the Avalon toward appealing to younger demographical groups.

As a result, the 2013 Avalon’s styling reflects the Japanese manufacturer’s modernized design direction. The new Avalon is sleeker, more contemporary and dons the current trendy industry standard wide oval grille, but still remains far from extraordinary in relation to its competitors. Hyundai’s Genesis was first at bat in that respect, hitting a few home runs in the process. Chrysler’s latest 300 is also a winner. Toyota even gave a few vehicles to DUB, who took it to the SEMA customization show. Hardly filling a prescription for instant success with young, urban buyers, Toyota seems to want the Avalon to be all things for all market categories.

Built at Toyota’s manufacturing plant in Kentucky, major changes were made to enhance the vehicle’s build quality and value – key factors that the Japanese brand has been evaluated and judged upon for years. Features such as: the acoustic noise-reducing windshield; leather surfaces that are stitched on sewing machines; a rear back-up camera; optional heated front and rear seats; a hybrid that achieves 40 mpg; a Blind Spot Monitoring system (BSM) with Rear Cross Traffic Alert (the first Toyota to receive such technology); ten airbags; Dynamic Radar Cruise Control; and paddle shifters that can be operated in any drive mode. Eco, Normal and Sport modes increase the versatility of the vehicle’s drive characteristics and puts more control in the motorist’s hands. The Eco mode will yield the most fuel economy imaginable, which is reported by Toyota to be 21 city mpg and 31 hwy mpg.

I placed more emphasis on the gasoline 3.5-liter aluminum V6 model while exploring what San Antonio had to offer. A carry-over from the previous Avalon, Toyota tuned the car to meet its desired specifications of power, efficiency and fuel economy. Coupled with 6-speed automatic transmission, the V6 puts out 268 horsepower at 6,200 rpm and 248 lbs.-ft. of torque at 4,700 rpm. Acceleration is decent and linear. Yet, steering and braking are both on the soft side. But the Avalon did have a better than expected turning radius. This was important since my driver partner Nina and I made several miscalculations in our route guidance. The large steering wheel served as a remote control unit, featuring a range of buttons for the vehicle’s typical operations such as audio. The backseat area is spacious and cup-holders are located throughout except for the door’s map pockets. Additionally, the fold-down rear seats are reclined with a middle armrest (with cup-holders) that provides a pass-through to a generous trunk space.

The overall cabin feel of the new Avalon is one of comfort. In many ways I felt like Perry in his 2010 Avalon. It drove well, returned good mileage and has a fair amount of multi-media technology, which is up for discussion on whether Toyota went too contemporary too soon. Yes, Bluetooth, SIRIUS/XM, Pandora, etc seems to be must-haves, but the framework in how they are presented makes for another topic of discussion. The touchscreen and soft touch, dash controls take precedence for instance. There are two large, traditional knobs for volume and scroll buttons, which is great, but inputting navigation addresses and executing searches can be very time consuming. It took me three times as long as it does using BMW’s iDrive or Audi’s MMI. Perry has no problem in that category nor does my wife who owns a 2010 Venza. Yet, Toyota, in trying to go futuristic is sending itself backwards from my perspective. Ford has been highly criticized for its small touchscreen inputs, and Cadillac’s CUE is not receiving much love either. I think this is an industry wide tactical error, whereas the forethought is that consumers are moving in the direction of their touchscreen smartphones and tablets. I don’t believe that theory should be emulated into autos because that type of user interface requires attention and patience, which drivers don’t have and which we should not sacrifice safety for. Additionally, the uncanny head unit seems ill placed and designed separately from the rest of the interior.

The Avalon gas model will be offered in four trims including the base $30,990 XLE ($2,205 less than current base); the $33,195 XLE Premium; the $35,500 XLE Touring; and the $39,650 Limited. In the Avalon Hybrid lineup, the XLE Premium starts at $35,555; the XLE Touring is priced at $37,250; and the Limited begins at $41,400. An array of lovely exterior hues are available including: Classic Silver Metallic; Magnetic Gray Metallic; Attitude Black Metallic; Sizzling Crimson Mica; Champagne Mica; Moulin Rouge Mica; Blizzard Pearl; Cypress Pearl; and Nautical Blue Metallic.

Although Toyota’s intentions are good, the Avalon seems to be simply on par with the rest of the industry but fails to exceed heightened expectations or to provide anything that breaks away emotionally from the pack.