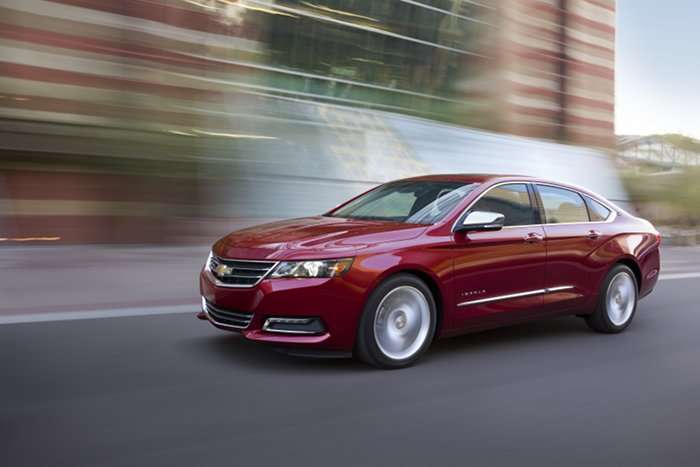 Subsisting within the east and southern regions of Africa, the Impala is evolutionarily unique since its Gazelle nomenclature, from the Zulu language, ascended to form its very own tribe dubbed the Aepycerotini. Chevrolet (Chevy) then took this DNA code and created a full-size automobile that dominated industry sales in the late 1950s. Natural law (Tao) would soon evolve into the form of the next American-born legend.

Before progressing into the 2014 Chevy Impala, General Motors (GM) took a scientific approach to rebuilding the nomenclature of the brand to ascertain it embodied the same characteristics and traits as the prior generations including the all-important first gen models. Though design would play a dramatic role in whether society accepts it as a meaningful replacement or simply a General Motors replica of another model, I must say it honors the spirit of the past while invigorating with a plethora of in-car technology by way of the new MyLink telematics, Euro-quality materials, a meaningful silhouette and plenty of space.
When first introduced I was surprised at what the Impala had become because the 2013 model was so blasé. Enter Ed Welburn, VP of Global Design and the design mastermind behind every GM product that rolls out of the factory. Welburn was emotionally struck when speaking about the hard work and strategic efforts his design team put into recreating the Impala. With ten design centers around the globe, Welburn must transact his thoughts like a six century B.C. sage. After all, the esoteric but infinitely practical book “Tao Te Ching” does say a man of virtue performs his part. The goal with this project was to challenge his artisans with inspiration of the 1965 Impala, “a great car with a great design,” Welburn expressed. Much of that vehicle’s spirit is now instilled within the new Impala, which also will have a healthy influence on future Chevy vehicles and is a true flagship vehicle for the brand.
Chevy offers the 2014 Impala in five trims levels including: LS 2.5L at $27,535; LT 2.5L at $29,785; LT 3.6L at $30,760; LTZ 2.5L at $34,555; and LTZ 3.6L at $36,580. The LT models will comprise the majority of the Impala mix with an estimated 55% of sales. Compare with the Ford Taurus, Toyota Avalon, Hyundai Azera and Nissan Maxima. The Impala comes standard with 10 airbags and features the same active safety technology found in high end German cars such as Lane Departure Warning, Forward Collision Alert, Collision Mitigation Braking, Full Speed-Range Adaptive Cruise Control and much more. Knowing my Impala LTZ was bedazzled with stylish 20” rims ($400), Navigation ($795), Adaptive Cruise Control ($1,695), 11-speaker Bose Surround Sound ($700), and the LTZ Comfort & Convenience Package ($1,035), I jetted around Southern California with security and confidence. The power in the 3.6-liter V6 was decent at 305-horsepower and 264 pound-feet of torque, but I wasn’t expecting to take on anyone at the stoplight either. In combination with the six-speed auto Hydra-Matic transmission the new Impala with the V6 is EPA certified at 19 city and 29 highway mpg. Not bad at all! A 2.5L 4-cylinder with an estimated 21 city/31 highway mpg launches in a few months and the 2.4L eAssist (25/35 mpg) is coming by year’s end.

Other nifty add-ons included a double pane sunroof, dual exhaust tips, leather interior, rearview camera, rear parking assist and 8-way power seats with power lumbar functionality, a bigger trunk, interior light strips and directional and ambient lighting. But Welburn still wanted more and his designers gave it to him. The dual port, chiseled front end, with a Camaro-like hood and a widened and lowered grille with linear chrome slats connected by the headlights are not afterthoughts but intentional design statements. A chrome molding strip down the body side, muscular wheel arches, a six-window theme surrounded by aluminum trim, and chrome colored side view mirrors finish off Welburn’s statement.
No matter the style or presentation of the consumer, GM ascertained that their connectivity and technological needs would be met. With that in mind the Next-Generation Chevrolet MyLink was implemented in the 2014 Impala and comes with an 8” touchscreen within the center stack featuring embedded conventional style push buttons, large touch sensitive icons, and redundant physical knobs. The screen moves up to reveal a storage bin with an iPhone connection so you can simply store the phone away and take control of functions by using MyLink. Or you can tether your phone or nine other devices using Bluetooth or connect with the three USB ports or aux jack. Additionally, there is storage for up to 1000 contacts and a valet mode with a four digit code that locks out all personal info such as your stored home address. The display is similar to an iPad and is very user-friendly, safe and convenient.
The drive experience in San Diego with the Impala and myLink was phenomenal. For example there is an OnStar app, a weather app and a Pandora app. My favorite was the 3-D mapping which virtually recreates the environment being navigated. All of my contacts and media from the iPhone were presented at the tip of my finger via the user interface, which also leaves room for expansion and the adaption of additional apps. In hindsight, Chevy is already paying it forward.
Currently, 70% of Impala sales are fleet based and the goal is for Chevy to flip the algorithm especially since it’s the company’s flagship sedan. Lao Tsu says The Tao is impartial and stays with good men all the time. If the great nomad were around today I’m certain he would apply his thinking to “good autos,” and the new Impala certainly falls within that favor.