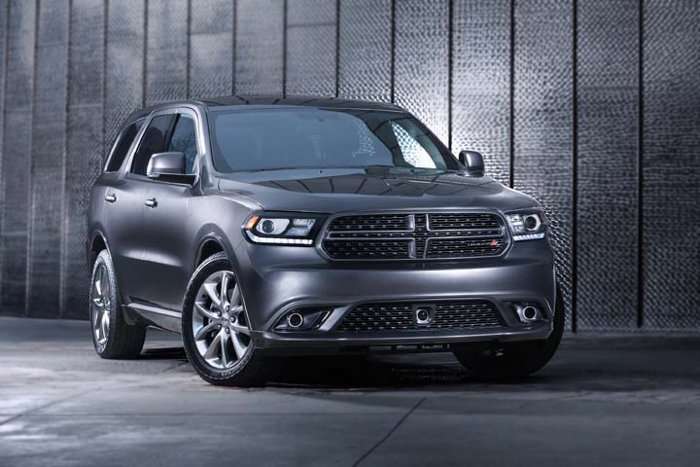 In 2011, Automotive Rhythms had the opportunity to spend several days with the then new Dodge Durango Citadel in Miami for the Winter Music Conference. From industry pro DJs to pro athletes, all were impressed with the new styling. Fast forward a couple of years and Dodge delivers again with a new 2014 Durango available in five flavors: SXT, Rallye, Limited (new for 2014), R/T and the top-of-the-line, luxury-laden Citadel.

This time around, we appointed the R/T as our coach of choice through the canyons of southern California and the scenic Pacific Coast Highway. As with our time evaluating the 2014 Jeep Cherokee in southern California, surely another setting other than a tight twisty canyon would be more suitable. Perhaps Cali’s deceptively cunning Willow Springs Raceway to show off the Durango R/T’s brawny 360 horsepower 5.7-liter HEMI V8 muscle with 390 pound-feet of torque would’ve been more fitting. Okay, maybe that’s wishful thinking. However, given the R/T’s power and aggressive smooth looks, I can picture this muscular athlete as Willow Springs’ track boss. This is saying quite a bit considering the steely SUV is a 7-passenger SUV with a tow rating of 7,400 pounds.

As a potential R/T owner, fuel economy may not be your top priority, however, in today’s fluctuating economic climate, fuel costs are hard to ignore. For 2014, the Durango is equipped with a Fuel Eco Mode and Fuel Saver Technology that monitors and optimizes the transmission’s shift schedule and throttle sensitivity, seamlessly alternating between four and eight cylinder modes when full HEMI power may not be needed. Rest assured, your 360 ponies are ready to gallop the moment they are summoned.

With an experienced route pilot at my side, the Durango R/T proved to handle the canyon’s curves with almost the same prowess of its performance-car stablemates. Body roll was practically non-existent and handling was firmly planted thanks to 20″ Hyper Black aluminum wheels wrapped in performance rubber, fitted to a sport-tuned four-wheel independent suspension with larger sway bars and stiffer shocks and springs. New for 2014 is an eight speed automatic transmission with steering wheel mounted paddle shifters controlled by a new center console rotary shift knob. I have to admit, I initially wasn’t a fan of such a shifter in this class of SUVs, but it quickly grew on me and served as a visual cue of the technologies Dodge has introduced in the new Durango. There were moments, however, when down and up shifting produced a harsher than expected gearing transition during our “spirited” drive. But hey, how often will you find yourself hastening through the canyons of California at an accelerated pace while trying to shuffle your kid off to their next game or recital?

Speaking of kids, there is plenty of space to tote around your little athlete, musician, dancer and academic achiever with more than ample room for equipment and gear thanks to 50 different seating/cargo configurations. Need to pick up that new 6 foot glass dining room table? No worries, the second row captain’s seats and very functional third row seats fold flat, providing a secure transport area as you ride nestled in the standard black Capri leather seats smartly accented with red stitching. Also available are premium perforated Nappa leather seats for an even sportier feel.

Standard on the R/T you will find the very intuitive 8.4-inch touch-screen Uconnect infotainment system. When paired with the optional Blu-ray/DVD player with 9″ headrest mounted screens, standard USB connectivity, SD card slots, HDMI and RCA ports and auxiliary jacks for gaming and other electronic entertainment options, you may never hear the words “are we there yet?” uttered from your passengers again.

When it comes to safety, you and your precious cargo are shielded with standard full-length side-curtain air bags providing protection to all three rows. The optional adaptive cruise control senses when you are approaching the vehicle ahead and aptly begins to slow down your speed accordingly or brings your vehicle to a controlled stop if warranted. For instance, when the Durango is approaching another vehicle too suddenly, the available Forward Collision Warning Crash Mitigation system promptly sounds an alert to avoid the impending danger. Opt for the available Blind-spot Monitoring/Rear Cross Path detection system and you practically have 360 degrees of protection.

With a legacy of performance, seven passenger seating with three rows, bold new lines complimented with Dodge’s signature “hockey stick” racing taillights all for an MSRP of $39,995, the 2014 Dodge Durango R/T just may be the answer for the performance driven, outgoing family.