2014 Maserati Ghibli: Under the Tuscan Sun 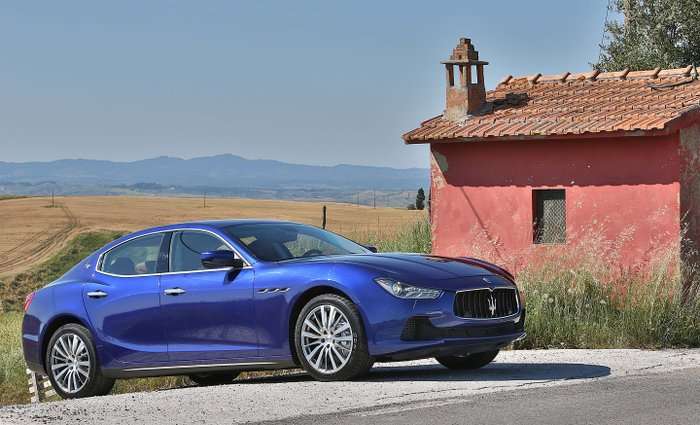 Welcome to the splendor and exquisite nature of Tuscany, Italy, praised numerous times as the subject of immeasurable legends, poems and folklore. Be it Florence, Pisa, Volterra, San Gimignano or Sienna, beautiful Tuscan cities has been known for famed green hills, colorful artistry, diverse culture, fine wine and world-famous cuisine for decades in Italy. This is not a locale where you simply pass by and wave, you have to experience it with passion and affection. After all, many prominent minds such as Botticelli, Leonardo da Vinci and Michelangelo lived and worked here. So what better way to tour through the rolling hills and quaint towns of Tuscany in Maserati’s all-new 2014 Ghibli 4-door executive sports sedan?

Exploring the ins and outs of the Ghibli in its native country was an extremely important event for Maserati since it’s their first full-size luxury sports car and second vehicle introduced in 6 months. Available in September for around $65,000, the Ghibli is a vehicle that allows the driver to take control of its performance and balance without the manipulation of too many modern day driver technologies. We spent our time in the outskirts of Siena at the impeccable La Bagnaia Resort nestled within the hills of the Tuscan countryside, better known as the medieval homestead of Bagnaia, which dates back to 1200. A cadre of Ghiblis touring around the 5-star property imagined the perfect movie setting, Bond-like almost.

We all know about the innovative Maserati brothers who began in Bologna, Italy as racing car manufacturers in 1914. All of their Trident-badged Italian models are graceful works of art with alluring, curvaceous and flowing lines. Currently, the legendary automaker continues to employ the equally renowned Pininfarina design house for the styling of their attractive vehicles. Recently, Maserati has made great strides in creating more mainstream awareness in the world of high-end luxury sports cars. Their mission is not fixated on all-out acceleration or to become a full-fledged racecar, yet hones the ability to go fast intelligently. Especially since Maseratis are not typically light vehicles. Yet, their weight distribution is perfectly balanced and reputation is honored with prestige and character. Once inside the cockpit there is no sense of urgency. Supple leathers, refined woods, interchangeable trims and contrast stitching offers title holders a key advantage with its disciplined beauty and admirable performance.

The Ghibli is shorter, lighter, more agile and has a sportier character compared to the larger Quattroporte and will help the company achieve a growth plan of 50,000 units by 2015. Keep in mind they sold 6,200 cars in 2012. The vehicles — Ghibli, Ghibli S and Ghibli S Q4 – are available with two turbocharged 3-liter V6 engines; a new ZF 8-speed automatic transmission and both rear-wheel drive and an all-wheel drive platform with a limited slip differential dubbed “Q4.” The S and S Q4 receive the more powerful 404 horsepower and 406 lb-ft of torque from just 1750 rpm variant and the base Ghibli gets a decent 345-horsepower in its package. The S Q4 also moves from 0 to 60 mph in 4.8 seconds and has a top speed of 175 mph (177 mph for the S). The power in the S and S Q4 is proficient and works admirably with the ZF transmission. A 3-liter V6 turbo-diesel with 275-horsepower will introduce itself as the first in the company’s history but won’t make it to the U.S. What a pity.

The Ghibli is incredibly balanced, limber and very agile. Its hydraulic steering is pretty fast as well. Though, I would like to see shift paddles on the steering wheel and not the column and the gear shifter is a bit plain. The info screen between the speedometer and tachometer is very beneficial however. It displays vehicle habits such as route guidance and graphics of the torque delivery from Q4. Speaking of delivery, the Q4 runs with a strong rear bias – around 70 percent – and at higher speeds it shifts even more torque to the rear axle until it reaches 100 percent. Essentially, Q4’s Continuous Torque Vectoring torque split can adjust from 0/100 to 50/50 and constantly manages grip for each individual wheel. While cruising around town we caught the attention of Tuscan residents by way of the sports car’s radiance as well as its profound exhaust tuning. In Sport mode, steering assist kicks in, throttle profile is adjusted, shift points are quicker and exhaust flaps stay open. Many times we downshifted and accelerated to appease smiling young boys and girls. The combination of Maserati’s fleet and the town’s preparation for Palio di Siena, one of the most spectacular horse races in the world, especially had the people in a state of jubilation. Imagine 17 districts of Siena competing against one another in the middle of the Piazza del Campo which I had the luxury of visiting.

Aesthetically, the body is alluring with an aerodynamically enhanced front end. Maserati ventured back to their heritage with the original GranTurismo and its birdcage styling. The robust grille maintains the Trident in the center and the proportions incorporate muscular fenders. The rear end is abruptly short and takes some getting used to when compared to traditional Maserati decks. There is an extensive use of aluminum (doors and hood) which saves on body weight needed for that same perfect 50/50 the Quattroporte enjoys. The Ghibli is built off of the same platform as the Quattroporte but with a shorter wheelbase and is instilled with 6-piston front and 4-piston rear calipers. 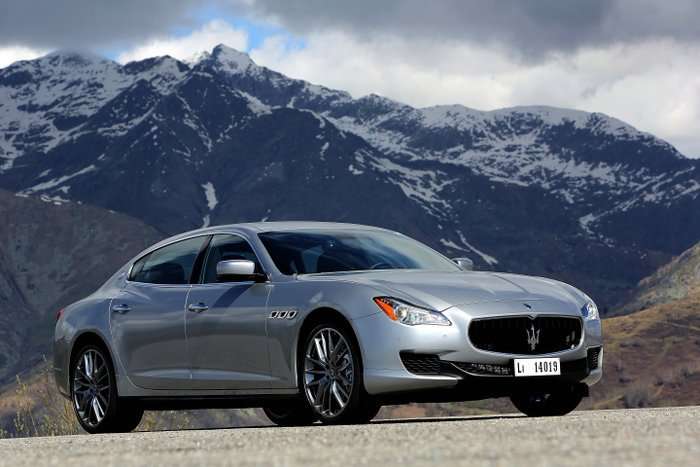 Ghibli is the reprise of a late 1960s Maserati coupe and convertible name, and refers to a Mediterranean wind. Actually there are a number of classic Maseratis themed after winds such as the Bora and Mistral. The interior of the Ghibli is as enjoyable as a soft, summer breeze. Elegant shift paddles, multi-contour materials such as carbon fiber and leather mixes or veneer and leather combos enhance the premium cabin. Customizations will allow for a dual hued leather dash for example. I had a Black/Mocha combo with a Tan headliner. An 8.5” multi-media entertainment system with a back-up camera and the premium 15-speaker, 1280-watt Bowers and Wilkins Surround Sound entice your interior experience. With 50 years of audio expertise, the British company ascertained their technology using aluminum dome tweeters and Kevlar midrange cones was perfectly orchestrated for the Ghibli, with crisp, concert-like rhythms delivered spectacularly throughout the cabin. HARMAN added touches with their QuantumLogic Surround for crisp, concert-like rhythms delivered spectacularly throughout the cabin.

Maserati has another Italian thoroughbred winner in its corner. With more product in the stable, the name will continue to deliver prominence to the Italian brand!