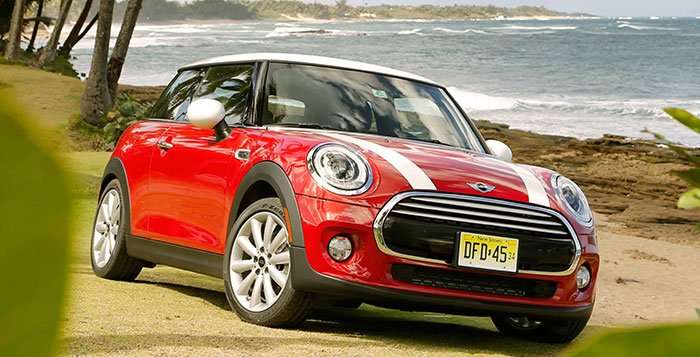 Get the popcorn ready, set your 60” plasma to Netflix, and dial up The Italian Job to witness one of the finest and action-packed vehicle chase scenes of all time. No, the subject onscreen was not a Ford Mustang, Ferrari, Porsche or Camaro; it was a Mini Cooper, in fact an original Mini Cooper! Born and bred in England and rooted from Germany, this classic continues to be a global hit with consumers as diverse as today’s music industry. For 2014, owners and newcomers alike can welcome a new generation of the MINI Hardtop with the creation of the latest Cooper and Cooper S codenamed The New Original by MINI insiders.

Popular is an understatement for this small, premium and sporty vehicle. With the U.S. representing the automaker’s largest market they witnessed 305,000 global sales in 2013. More importantly, MINI sticks to their heritage and build all vehicles in either Oxford or Austria unlike some MINI competitors who are trying incessantly to keep up. The combination of tradition and styling was the blueprint to remix this classic. Now, the 2014 models feature revolutionized engines, new automatic and manual transmissions, newer and lighter suspensions, LED head and tail lights, active safety, and a bevy of interior enhancements with both technology and design in mind.

To explore the imagination of The New Original, we headed to San Juan, Puerto Rico where the weather was cozy, the roads exciting, and the people friendly. The journey began from the luxuriant Ritz-Carlton Dorado and took us across most of the island including Gasolina Beach. In fact, the 5-star hotel was so massive and confusing that I made several wrong turns and landed on the path for people moving karts only. But who knew? The MINI Hardtop fit right in!

My drive partner and I started out in a Cooper with the 1.5-liter, 3-cylinder TwinPower Turbo engine that kicks out 134 horsepower. This is the first time this application receives turbocharging. To its benefit, torque is increased 42% from 114 to 162 lb-ft and acceleration time is cut by a whopping 2.3 seconds to 7.3 seconds in the 0 to 60 mph dash when paired with the 6-speed automatic transmission. The automatic also helps the little guy achieve 42 highway mpg (preliminary), features start/stop technology, and magically reads road data through the intelligent navigation and matches shift patterns accordingly. I do recall the Rolls-Royce Wraith offering the same and is most likely sharing formulas from parent company BMW. Our Cooper was paired with the standard 6-speed manual transmission that could be switched to “Sport” or “Green” mode depending on driving style. Though the Cooper is much sportier and more agile than its predecessor, I was in tune with the Cooper S and its 2-liter, 4-cylinder TwinPower Turbo engine that we drove after stopping for lunch. Horsepower is set at 189 and 0 to 60 mph is clocked at 6.4 seconds with the automatic. But on those tight, windy Puerto Rican roads, the vehicle felt much faster and is easily controlled by three different shift options: paddle shifters on the leather-wrapped steering wheel, automatic mode, or manual up/down shifts with the gear selector.

Heard of the Philadelphia Eagles’ running back LeSean McKoy? With speed and shifty moves he won the 2013 NFL rushing title. So imagine him on a go-kart downhill. Yep, that’s how the Cooper S felt on the island roads! This can be highly attributed to the introduction of Dynamic Damper Control which allows the driver to switch drive characteristics. The Cooper S can also be defined by its twin-centered exhaust tips opposed to the singular, left tip on the Cooper.

Longer, wider, and taller, the new 2-door Hardtop is very spacious and accommodating inside, except if you jump in the second row. The story here is the placement of the traditional MINI Speedometer from the center stack (due to customer feedback) to a minimized instrument cluster on the steering column. The circular ring still remains, but has now become an intuitive multi-media system (up to 8.8”) and is outlined with an illuminated LED ring. Similar to a mood ring, it changes hues during most operations such as adjusting the temperature, receiving a call when the phone is paired, or switching on Sport mode. In reverse, not only does the rear camera show your position, but the ring glows green, yellow, and red the closer the vehicle comes to an object. This is known as Park Distance Control. Also, window switches have been moved from the center console to the doors.

Most of the vehicle’s technologies are operated by way of the MINI Controller which is similar to BMW’s iDrive. It is positioned between the front seats and is a challenge adjusting since it is set deep and further back than what I am used to on BMW vehicles. However, it is very fluid and intelligent. MINI Connected integrates your iPhone or Android with a cadre of apps such as Twitter, Facebook, Web Radio and MINI Calendar. Of course there is an App to utilize your phone as the Hardtop’s brain! The MINI Head-Up-Display showcases redundant vehicle data such as speed so your eyes can stay focused ahead. But I found this feature a bit distracting because it emulated a basic glass screen and seemed to impede my view. So I simply ignored it. Moreover, a video based Parking Assistant locates and steers your MINI into its space.

Pick a color (11 available hues), pick a wheel design (11 possible styles from 15” to 18”), and pick rooftop and mirror cap colors or designs. Mix them all together and MINI offers you a variety of combinations to set your Cooper apart from the rest. It’s the freshest strategy to keep a classic relevant. And don’t forget your hood racing stripes! Pricing starts at $19,950 for the Cooper and $23,600 for the Cooper S.