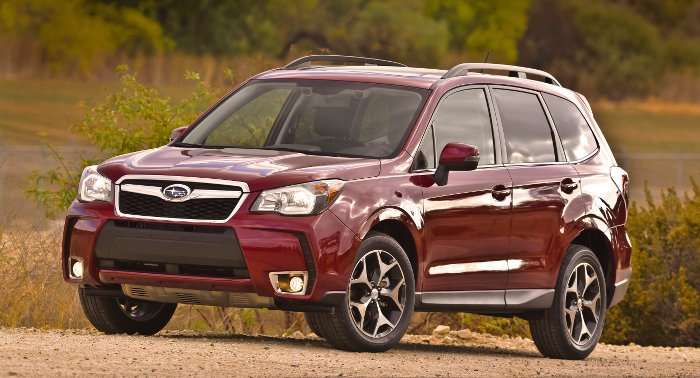 Buyers with active lifestyles are loyal to Subaru because Subaru is loyal to them. The company whose relationship with athletes began with its sponsorship of the US ski team in the 1970s continues to sweat the details in the fourth all-new version of its Forester crossover. Although the newest Forester is larger and less wagon-like than its predecessors, it continues to offer excellent gas mileage and a car-like ride.
Two new continuously-variable automatic transmissions developed in-house by Subaru engineers give the Forester’s naturally-aspirated 2.5-liter engine and 2-liter turbo block smoother, stronger acceleration. The turbo version is now a stand-alone model as opposed to a modified version of the naturally-aspirated car, with distinct exterior styling, 18-inch wheels, SI-Drive, dual exhaust pipes and larger brakes. The turbocharger, which is similar to the unit in the BRZ engine, propels the Forester from zero-to-sixty miles-per-hour in 6.2 seconds. Unlike the outgoing turbo model, the 2014 car will run on regular unleaded gasoline, although the manufacturer still recommends premium.
Base price for the 2.5i with a six-speed manual transmission is $21,995, excluding the $825 delivery charge. The volume-leading 2.5i Premium starts at $24,995 for the automatic transmission version, while the base 2.0 XT turbo starts at $27,995. The upscale 2.0 XT Touring model has a base sticker price of $32,995.

Designers added 1” to the Forester’s wheelbase, .5” to its width and 1.4” in height in order to give both rows of passengers more room. The instrument panel is further forward to increase room up front, while the center console has been repositioned and floor tunnel lowered to give second-row passengers more legroom. Re-contoured rear seats are more compatible with child safety seats. Overall vehicle length increases 1.4” adding some additional cargo space. Bucking the trend towards narrow greenhouses and thick pillars, product planners also enhanced visibility. The A pillars are further forward, which also allows the front doors to open wider, and the rear pillars are thin to minimize blind spots. The driver sits higher for a better forward view. A rearview camera is standard on all but the base model.
An available power liftgate makes it easier to load up the back with cargo. Despite offering 8.7” of ground clearance, lift-over height for the cargo area remains lower than many competitive products. Features such as a removable rubber mat, 12-volt power point, cargo bay light and levers next to the liftgate to fold the second-row seats make the Forester an obvious choice for cyclists. The cargo floor is also flatter, with about two inches less rise than on the former model.

At a recent media event in Tucson, Arizona, I had the opportunity to drive both naturally-aspirated and turbocharged versions of the 2014 Forester on paved and dirt roads south of town. A simulated uphill ice ramp showcased the Forester’s ability to maintain traction on slick surfaces. A new X-Mode which works at speeds below 25 miles-per-hour changes the throttle profile in the car’s on-board computer for better control on slick surfaces. Subaru’s hill hold feature prevents the driver from sliding backwards on an ice-covered hill by applying the brakes for slightly more than a second, while hill descent control helps to maintain directional stability without the brakes. 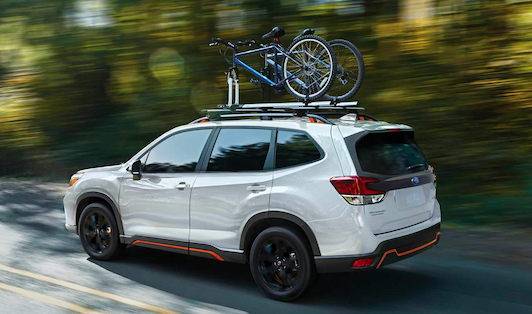 Subaru’s boxer engines work exceptionally well with all-wheel drive platforms because of their inherent balance. For those who are less interested in honing driving skills than getting safely to the trailhead, this means a seamless transition from pavement to dirt, and the ability to traverse some fairly serious off-road trails with ease. The drive started out near the town of Oracle, with 3500 feet of elevation. The exhaust-driven turbocharger makes the engine’s peak torque of 258 foot-pounds available at 2000 rpm. So the car climbs steep grades with ease, whether or not the driver dips deep into the throttle. Turbochargers also improve engine efficiency by forcing air into the engine, which decreases parasitic power loss at altitude. Unlike the turbochargers of several decades back, the new units have virtually no turbo lag and much fewer maintenance problems, including oil coking. Except for the higher transaction price, it’s a win/win for the driver.
While the new Forester doesn’t have the steering response of the sporty BRZ, increased torsional rigidity and suspension improvements to both 2.5i and 2.0 models improve its handling in winding roads. Engineers replaced the hydraulic power steering system with electric power steering to save weight and reduce pumping losses. On-center response is a bit sluggish, but drivers should feel quite comfortable taking turns at speed. A lower center of gravity compared to the former model enhances stability, while thicker stabilizer bars and stiffer shocks reduce roll. On a twenty-mile section of graded dirt road, the Forester felt solid as a rock, maintaining excellent traction on all four wheels. I was able to exceed 40 on a 25 mile-per-hour road without feeling unsafe. When necessary, the Forester’s four-wheel disc brakes stopped the car in a firm, linear fashion.
Driving through morning rush-hour traffic in Tucson, the newest model’s enhanced side and rear visibility made it easier to monitor traffic in the adjacent lanes. I also noticed a reduction in noise intrusion as compared to former models, which made it easier to converse with my co-driver. Subaru’s EyeSight system that debuted on Legacy and Outback models comes to the 2014 Forester as an option on the Touring grades. It includes adaptive cruise control which maintains a preset distance between the Forester and the car in front, pre-collision and lane departure warning. The adaptive cruise control allows drivers to keep the system engaged in stop-and-go traffic for better gas mileage.

All 2014 models come equipped with a center stack display screen that gives the driver ambient temperature, road freeze warnings, real-time and average fuel economy. Upscale Forester models are available with Aha radio technology, which enables the user to download a single smart phone app for news feeds, internet radio, audio books and more. The center stack screen on all but the base model displays the rearview camera image. On turbocharged models, an information screen gives the driver boost pressures and air inlet temperature.

The 2014 Subaru Forester comes with front, side, side curtain and driver’s knee airbags, antilock brakes and vehicle dynamic control. A fuel cut-off system automatically engages in the event of a serious collision. Roof crush performance for 2014 models is four-times the vehicle weight.
The all-new Subaru Forester rolls into dealerships this March.
Like: A versatile five-passenger crossover with standard all-wheel drive and an athlete-friendly cargo area.
Dislike: Soft on-center steering response.