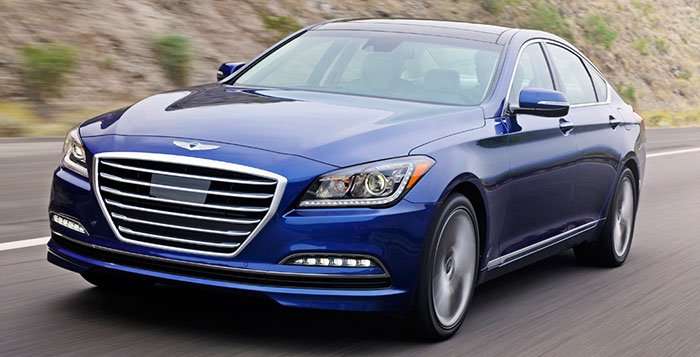 Make no mistake, Hyundai’s prevalence in the luxury and performance sectors is not a Cinderella story where a magical year becomes representative of their heritage in totality. The crew from South Korea has produced more hits than Miguel Cabrera lately and is on deck to continue their streak. With elevated consumer interest in nameplates such as the premium Equus touring sedan, the Veloster hatchback and mid-level Sonata, Hyundai also ascertains diversity within their lineup. Now the time has come for the Korean automaker to welcome the latest generation Genesis sports sedan whose success is a forgone conclusion.

You think it’s coincidental that the brand sold 721,000 vehicles in 2013? If so many customers are dubious of the quality of Korean vehicles then why are they closing in on one million annual sales? The early adopters have certainly changed the tide and shifted the cognitive level of thinking from “skeptical” to “convinced.” It’s time for the rest of us to get on board. So how does Hyundai maintain order and control? Simple, their recipe for success boils down to a few key measurements. Quality and value are first and foremost in the spectrum. Next is to deliver a satisfying owner experience. No one wants to spend additional time at a dealership for service. The third variable for success is high loyalty. Not only are their current players sticking with the brand, but Hyundai is also attracting new recruits such as converts from Lexus and Mercedes-Benz. It’s a good time for the brand.

To experience their latest and greatest industry threat Automotive Rhythms headed to Arizona to enjoy impeccable sunny weather and delightful, exciting roads behind the wheel of the 2015 Hyundai Genesis. Up 46% since its debut in 2009, the hyper sedan is elevating its game a notch to compete against the likes of the Lexus GS, Mercedes-Benz E-Class and the Cadillac CTS. Hyundai feels enthusiastic about this opportunity due to technology and performance enhancements such as AWD, Automatic Braking, Smart Trunk, standard Rearview camera and Navigation and the fact that it’s larger than most of its competitors. Developed with Magna, Hyundai’s AWD is able to shift 100% traction to either the front or the rear and has two modes, one function for AWD performance and another mode for AWD inclement weather conditions. 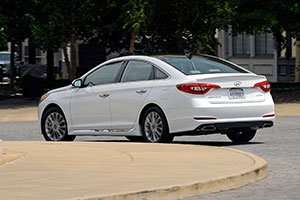 With two engines to choose from, the Genesis is aptly suited to fit entry-level performance thinkers and seasoned performance aficionados. I began the day with the $38,000 Genesis 3.8, which is $2,800 more than the outgoing model. Hyundai reasons the increase with the cadre of standard features. The GDI V6 produces 311 horsepower and 293 lb-ft of torque while delivering 16 city / 25 highway mpg for the AWD model and 18/29 for the RWD version. From approach, it is clearly evident that Hyundai totally reworked the shape, lines and accents of the Genesis. It is longer, stiffer and more hero-like. Especially with the changing of the polarizing grille, which is, in fact, bolder and more prominent than the grille it replaces. Though, we’re not sure if the front fascia resembles an Aston Martin or Audi. I guess you can’t go wrong with either, but it will nevertheless have to grow on us. The first leg of the drive was comfortable and engaging with the vehicle’s increased level of convenience factors. Power and acceleration were above average and pleasantly surprising. The matte wood inlays were clean, semi-aniline leather seat bolsters firm, sky roof majestic and the rear/side window shades provided the privacy you come to expect in full-size luxury vehicles. After the first stop, I played around with more tech features such as the Hand-free Smart Trunk Opener which opens the trunk when you walk into the vehicle’s rear “3-ft proximity” for 3 seconds with the key in hand. Hyundai offers three models for both the 3.8 and 5.0 including the Signature, Tech and Ultimate.

For round two I was given the keys to a Genesis RWD 5.0 which totaled $55,700 ($51,500 MSRP) including the Ultimate package with the 17-speaker Lexicon Discrete Logic sound system, Head-up Display, Continuous Damping Control Suspension, Power Trunk Lid and the 9.2” 720p HD Touch Screen Display to go along with the intuitive navigation, Blue Link, Gracenote, Sirius Satellite Radio, Aha Radio, Sound Hound and storage for your very own personal jukebox. However, the circular controller and center stack layout is extremely familiar to BMW’s iDrive and design arrangement.

On the road, the Genesis RWD 5.0 is riveting with its 420 horsepower 5-liter GDI V8 and 8-speed automatic transmission with paddle shifters. This is a vehicle you don’t mind frolicking the day away in. Every gear has the torque needed to separate from traffic like DeSean Jackson and the response from the electric power steering allows the Genesis to dip in and out of turns with the precision of LeSean McKoy. Much of the engineering and performance characteristics were achieved through Hyundai’s partnership with Lotus. Both extreme weather testing in Sweden and Death Valley and performance evaluations at the Nu¨rburgring were conducted to enhance the Genesis’ overall quality.

Some very intelligent technologies expected from German automakers include Lane Departure Warning and Lane Keep Assist that actually turns the wheel if you venture to close to the inside edge of your respective lane. I felt like I was being driven opposed to doing the driving. Then you have Smart Cruise Control with Stop/Start capability, LED Fog Lights, Blind Spot Detection, Automatic Emergency Braking and 9 airbags.

The future is now for Hyundai as they continue exceeding the expectations of customers. With the advent of the 2015 Genesis, the picture just got a little brighter.

PrevPrevious2015 Cadillac Escalade: Imperial Fortune
NextBeauty: From the Magic of Nature to the Lamborghini HuracánNext