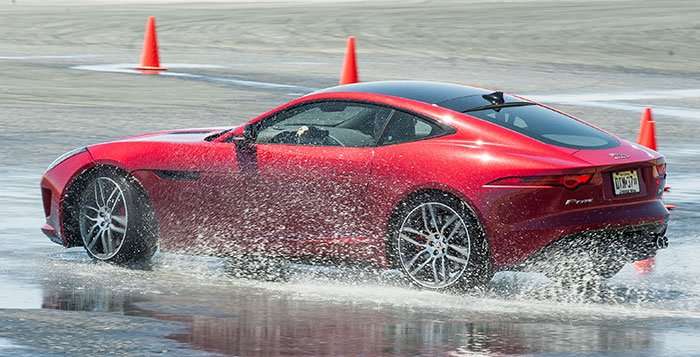 Bursting out of the gates of Gaydon like a bat out of hell is the exquisite and esteemed British sports car that has gained the respect of many automotive enthusiasts. Defined by flawless design, a venerable 5-liter supercharged V8, an 8-speed QuickShift transmission, an Active Exhaust System and artisan selected materials, Jaguar’s 2015 F-Type R Coupe has become the automaker’s elite all-star. It’s powerful, cunning and seductively hypnotizing.

The F-Type chronicles came to life with the debut of the soft-top (folds down in just 12 seconds) which went on sale last year. Starting as a 2014 model, it was presented in three fashions ranging from $69,000 to $92,000: F-Type Convertible, F-Type S Convertible and the F-Type V8 S Convertible powered by a 5-liter Supercharged V8 delivering 495-horsepower and hitting 60 mph from 0 in 4.2 seconds. The V8 S also has a top speed of 186 mph. Media, Jaguar aficionados and new customers welcomed the lightweight Jaguar with enthusiasm as it took on a life of its own. In fact, it has become so popular and characteristically reliable that non-traditional British enthusiasts have now considered the performance darling. For example, Automotive Rhythms instantly changed the opinions of NFL twin stars Jason and Devin McCourty after an exciting test drive with the F-Type on a racetrack. Prior to their drive, both were German car enthusiasts. 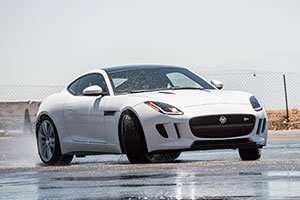 Certainly the Jaguar empire is on the rise with stealthy new products and ingenious marketing strategies such as the “Good to be Bad” campaign which debuted during the Super Bowl. Actually, the British marque has almost doubled sales from 2009. The introduction of the 2015 Jaguar F-Type Coupe trio will certainly continue the positive movement. With its aerodynamic blueprint, chiseled fascia, aluminum monocoque construction, low center of gravity and powerful V8, the all-new F-Type Coupe is enthusiastically ready for both the streets and the circuit. Jaguar announced recently that it was even faster (by 6 seconds) than the famed XJ220 at the Nürburgring motorsports complex which we had the pleasure of experiencing in Jaguar’s XKR. This amazing facility is where car companies take their vehicles for durability and high-speed performance evaluations.

I was delighted to have experienced both the $99,000 F-Type R Coupe with a 550- horsepower 5-liter Supercharged V8 and the $77,000 F-Type S Coupe with a 380-horsepower 3-liter Supercharged V6 in California’s City of Angels. A third model, the $65,000 F-Type Coupe with a 340-horsepower 3-liter Supercharged V6, is the gateway vehicle into the F-Type lineup that consists of six members. In a nutshell, this coupe is stunning, but very simple. Its mannerisms are also very different than the convertible. For starters, the aluminum structure is 80% stiffer than the convertible which is quite noticeable when taking high-speeds turns on the raceway. The S Coupe is strong, light, nimble, torque heavy and seems to hone a throatier exhaust note than the R, but I felt more comfortable in the prodigious 5-liter. No matter the gear or speed the Jaguar’s power throws you into the firm sports seats during every acceleration point. The R is earmarked by quad exhaust tips while the S gives you dual, centered pipes. This is also the first Jaguar with a Carbon Ceramic Matrix (CCM) braking system (optional). And with 550 dynamic horses you need powerful technology to bring the vehicle to a halt from its top speed of 186 mph. Each engine is mated to an 8-speed QuickShift transmission with dark orange paddle shifters mounted on the steering wheel with Electric Power Steering. Furthermore, the F-Type Coupe is engineered with an Electronic Active Differential that works in unison with Torque Vectoring for optimal traction and oversteer/understeer correction. 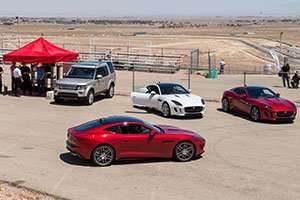 We started our drive from the immaculate London Hotel in West Hollywood in route to Willow Springs Raceway. To begin the day, I was assigned an F-Type with Italian Racing Red exterior and Camel Duo/Jet with Camel Stitch interior. It was optioned out with vicious 20” Black Gyrodyne alloy wheels ($1,000), a Panoramic Glass Roof ($1,200) which was needed to bring light into the limiting interior cabin, and the Vision Pack 3 ($2,100) that provides the British Thunder Cat with a Blind Spot Monitoring System, Front Park Sensors, Rear Parking Camera, and Adaptive & Intelligent Front Lighting. Though, I felt more confined in the Coupe than the Convertible, especially since the seats barely reclined. My shorter drive partner had no sizing qualms whatsoever. The headrest is flush with the seat and was very stiff. No time for relaxing in the F-Type R Coupe. This car is all about performance. I also questioned the partnership with Meridian and their 12-speaker 770-watt Sound System. To my surprise it is very weak and distorted at full volume. But if you press the Active Exhaust button you can listen to the Jaguar Snap, Crackle and Pop for hours. The in-dash popup vents are a cool factor and Jaguar’s touchscreen multi-media system and navigation are improving. Another neat touch is the embedded door handles which extend when the unlock button is pressed on the key fob.

But most important is the attractiveness of the F-Type Coupe in combination with its dynamic performance characteristics. “Creating a Sports Coupe is the purest of design tasks, and also the most challenging; get it right and aesthetically the result will be as dynamic as the car should be rewarding to drive. In the F-Type Coupe, I believe we’ve got it right. The purity of the C-X16 concept has been retained without compromise; the long hood, low roofline and tapering cabin of the F-Type Coupe inspires me every time I see it” said Ian Callum, Director of Design, Jaguar.

Before hitting the track I tooled with the configurable Dynamic Stability Control system operated through the central touchscreen. The driver is granted liberty to customize the characteristics of Dynamic mode however they see fit. For example, you can adjust the engine, steering or suspension for comfort or as its name implies, dynamic driving. You may also hit the Flag toggle switch to stiffen and speed up all performance operations. Conversely, the Snow toggle slows them down and starts the F-Type in second gear.

Jaguar has invented a reality from a virtual world where performance and defiance can coexist effortlessly, especially with new DNA that will carry the Super Cat’s bloodline further into the future. Are you ready yet?