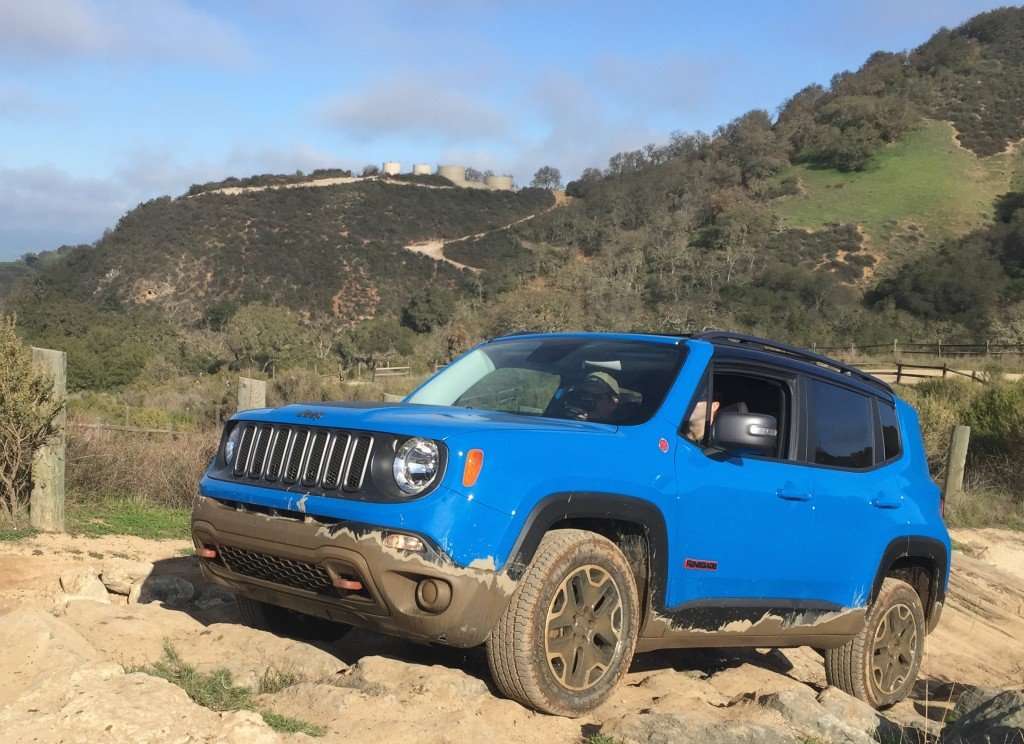 Jeep, the venerable SUV brand continues to deliver more country hits than Taylor Swift. No, not music hits, I’m speaking country as in backwoods, forests, mud, ruts and rough terrain. The Trail Rated manufacturer is on a roll selling over a million vehicles in the last five years. That’s a great deal of off-roading! Next up is the newfangled 2015 Renegade which sets them in small, utility territory (B segment) providing fuel efficiency, elevated driving dynamics, full capability, interior room and daring utility in typical Jeep fashion.

According to Jeep product planners and executives 2015 is going to be a fundamental and foundational year for the company with globalization taking center stage. For example, Jeep hasn’t manufactured locally in China in over 10 years. But the plan is to build there and the Renegade will play a vital role in Jeep’s future story and success worldwide. Especially since the little guy is their first all-new vehicle introduced in the last five years. Up until now, the current roster has only been updated or refreshed. Originally, the platform was envisioned as a minute, wide Jeep. But where would designers and engineers go from there when they embarked upon the project four years ago? Well, now we know the intention was to instill Wrangler personality and character into the Renegade. Designed and engineered in Auburn Hills, Michigan, the Renegade is small — but staying true to its heritage – is also rough, rugged and raw. 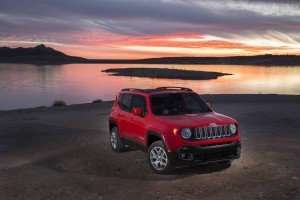 When I first saw photos of the domestic utility I was in disbelief that it could do what it had done during my drive time. Yet, I can’t deprive the senses of their second Hollister Hills State Vehicular Recreation Area (SVRA) experience where we evaluated the Renegade in Trail Rated environments. SVRA is a major state park and active space in the Gabilan Mountains in Hollister, CA for camping and picnicking. It is also laden with graphic trails for 4x4s, dirt bikes and ATVs. In fact, Jeep held the media drive for the Grand Cherokee a few years back in this same location and utilized some of the exact courses to prove the Renegade Trailhawk’s bravado. It scampered up steep hills providing a view of the sky from the windshield, not the sunroof, and continued traversing upward until our campground below looked as if it was being viewed through a telescope. I then selected Hill-decent Control and let the Renegade crawl downward at a slow pace while it self-braked. The Trailhawk was also confident in bouncing over small boulders and bending around tight, dirt slopes. Yep, everyone was scratching their heads after the off-road experience.

The premise of the Renegade is simple in nature but complex in construction. And of course there will be compromises when attempting to package your wish list and still come out on top with a game changer. For this reason the Renegade is an oddly shaped Jeep when it comes to styling, but it gets the job done. When a Wrangler pulled up, my drive partner and I looked at each other wondering why it actually didn’t resemble the Wrangler more. Naturally the vehicle features a vertical front end with big round headlights and Jeep’s 7-slot grille, a lowered beltline for larger windows, a flat roof and Trapezoidal wheel arches from the 1941 Willys MB Jeep. One of the coolest elements is the two-piece removable My Sky open-air system aka the dual-pane sunroof, of which one is power retractable and the other is fixed. Yet, both allow you to remove the 10-pound glass panes and store them in the cargo area under the 2-piece floor. With all windows rolled down and the sunroof relocated, the joy of fresh air and deep sunlight does become reminiscent of a Wrangler. The operation takes about ten minutes max so if your Spidey senses forecast rain make sure to pull over in enough time. 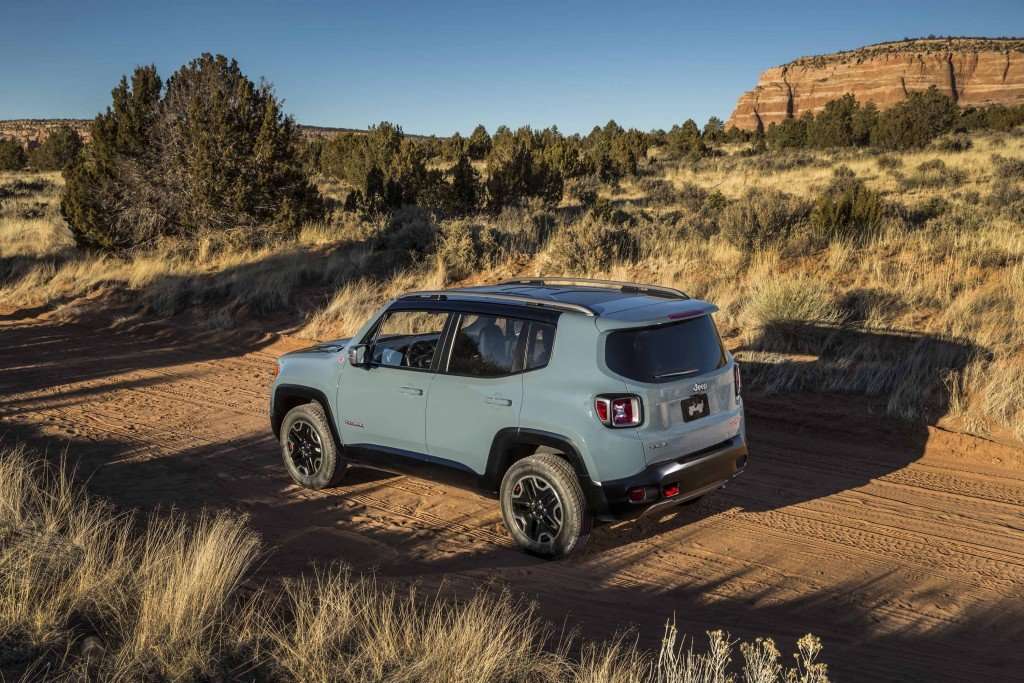 The Renegade is presented in four models dubbed Sport, Limited, Trailhawk and Latitude and ranges in MSRP from $17,995 for a Sport 4×2 to $25,995 for a Trailhawk (excludes $995 destination). Each represents a specific aspect of the Jeep hallmark such as the aggressive Trailhawk which is the toughest of the crew and is enhanced with front tow hooks, more aggressive approach (30.5 degree) and departure (34.3 degree) angles, taller tires, a painted roof option, Hill-decent Control, skid plates and the 4×4 Jeep Active Drive Low system with Rock mode). Two efficient 30-mpg plus powertrains come in the form of a 2.4-liter MultiAir2 4-cylinder with 180 horsepower and 175 lb-ft of torque (paired with the new 9-speed automatic transmission) and the spunky 1.4-liter MultiAir Turbo kicking out 160-horsepower and 184 lb-ft of torque (paired with the 6-speed manual transmission). Either engine can be had as 4×2 FWD or 4×4 ($2,000 option), but only the 2.4-liter specifically can tow up to 2,000 pounds.

I found the 2.4-liter to move with aspiration on the hilly roads in route to SVRA while manipulating the lower gears on the automatic. Though, on the highway we could have used a bit more torque for top-speed passing. A bevy of mechanical and electronic technologies advance the Renegade above some of its competitors. One of which is Selec Terrain traction system with settings for Auto, Snow, Sand, Mud and Rock. It is paired with both Jeep Active Drive and Active Drive Low 4×4 systems. Snow mode for example starts you off in 2nd gear and reduces throttle while Sand mode provides a little more wheel slip. Forward Collision Warning-Plus, LaneSense Departure Warning-Plus, seven airbags, Blind-spot Monitoring and Rear Cross Path detection and ParkView rear backup camera are just a few of 70 safety features added to the Renegade. 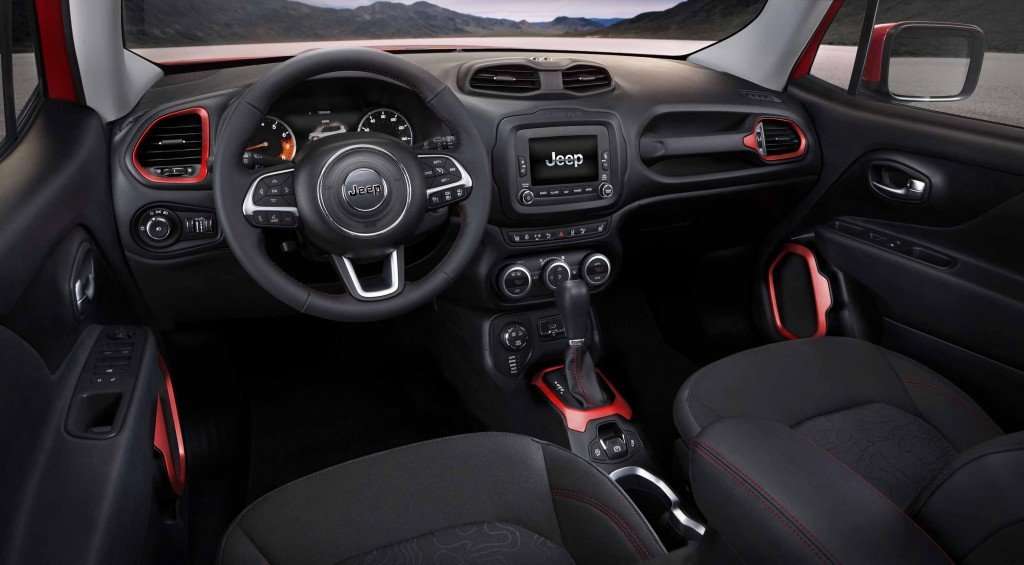 Jeep does some very cool things like model Orange/Grey interiors from base jumping suits and title their exterior hues Commando, perfect since I wore fatigues which made me feel like G.I. Joe on a recon mission. Jeep also challenged the company’s younger designers to sketch enthusiastic interiors grounded on their very own lifestyle expectations. The end result is an energetic, functional cabin with fold flat seats, a high-pitched headliner, large controls, colorful contrasts and the trapezoidal theme which accentuates the vents, door handle moldings, speakers and gearshift casing.

Sitting inside 116 cubic feet of interior space (51 cubic feet for the cargo area) felt like a magic trick. My athletic build is suited more for Grand Cherokees, not Renegades, so I thought. But I was pleasantly surprised by the vehicle’s roominess and comfort. The thick, multifunction steering wheel is solid and firm, as is the tall gear selector with manual mode on the 9-speed. An electric park brake creates space and leaves room for items such as the hardy, center cup holders and the Renegade’s actions are interpreted through a color 7” multi-display and configurable TFT gauge cluster which allows the vehicle to clearly communicate its activities with the driver. Additionally, Uconnect 5.0 and 6.5AN touchscreen systems deliver equivalent technology and digital services as the rest of the Jeep family. Intuitive, thoughtful and engaging, I am more at ease in a Chrysler ride when Uconnect is present. “With Uconnect Access, the all-new 2015 Jeep Renegade is the most innovative small sport-utility vehicle (SUV) on the market,” said Alan Amici, Head of Uconnect Systems and Services — Chrysler Group LLC. “Thanks to the array of Uconnect features and services, Renegade’s drivers can remain productive and stay in touch without ever taking their hands off the vehicle’s available heated steering wheel.”