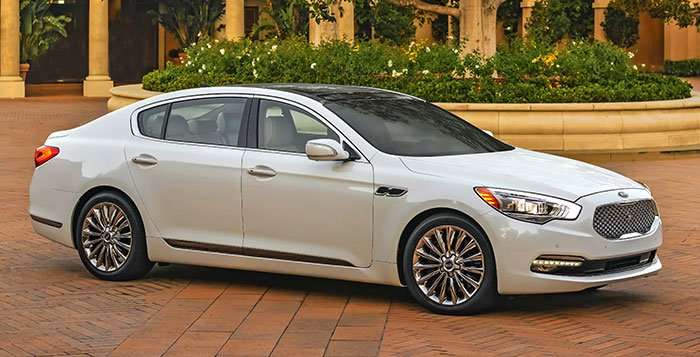 Life is full of wonderments with desires as intriguing and diverse as political opinions. If an exclusive, prominent rear-wheel drive vehicle with luxury accoutrements and a value entry price suits your lifestyle, then the solution is the all-new 2015 Kia K900. It’s the consummate automobile for transporting passengers with style, grace, innovation, and ultimate comfort.

My K900 (called the K9 in Korea) experience began with a chauffeured drive in the back of the large sedan after a lengthy cross-country flight from Washington, D.C. to Orange County, California. To my surprise, the rear cabin of the Kia mimicked that of the United Airlines’ first class cabin I had just spent six hours in. I took solace with the legroom extension, reclining, ventilated, and heated Nappa leather seating, window shades, conforming headrests, and a middle console controller with redundant vehicle switches. Surely, anyone picked up or dropped off in this vehicle could have easily mistaken it for a Lexus LS if it were devoid of badging. 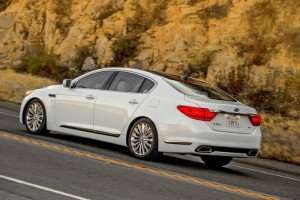 Look around and you see Kia is caught in the “Matrix” of magnitude. The automaker from Korea couldn’t help it if they wanted, but their enthusiasm is contagious. For example, the brand is connected to the NBA and 14 individual teams, the YouTube Music Awards, The Voice, fashion, innovative brand marketing, and benevolent advertising messaging such as our friendly and urban hamster crew. But the clever awareness campaigns are not a façade to disguise mediocrity. Kia’s vehicles speak positively in regards to their reliability, edginess, and connective capabilities. In fact, Interbrand has awarded them position “number 83” within the top 100 of their “2013 Best Global Brands” list alongside the likes of Starbucks and Ferrari. That’s a spectacular transition if you ask me. They have literally become somewhat of a phenomenon after just 20 years as a standalone brand here in the U.S.

After arriving at the immaculate Resort at Pelican Hill in Newport Coast, California, Kia positioned me perfectly within a world were K900s were omnipresent throughout the 5-star luxury property where I would soon take the wheel in a Titanium Brown (Black interior) VIP model. Not so long ago luxury sedans were purely touring vehicles, which provided their owners with primarily comfort and safety assistances. Today represents a new era of Korean automotive engineering where style, interactivity, entertainment, and performance are just as important as getting from point A to point B. Commingling the power and technology of a sports sedan with the prominence and safety orientation of four-door luxury tourer presents owners with the individual talents of two vehicles. All of these attributes are offered in the K900. For this reason Kia is targeting well-traveled, confident, and successful 45-54 year-old consumers (mostly men) who are tech obsessed and looking for inventive brands to introduce into their lives. The K900 is about new experiences and seeking fresh information with friends and family by your side on the journey.

Before I took my first spin in the K900, I posted a few pics on social media and received very diverse opinions, as expected, pertaining to its curvilinear physique. Stylistically, if you were to dissect the lines, designs, and proportions of the K900 you will see a variety of resemblances to other makes such as the Jaguar XJ, BMW 7 Series, and Lexus LS. Furthermore, the seat adjusters are similar to Mercedes-Benz and placed on the doors while the manu-matic gearshift controller and multi-media scroller are reminiscent of BMW’s iDrive. Well, two-time Olympic Gold medalist Shaun White was admired by his closest competitor Iouri Podladtchikov a.k.a. I-Pod for years before the Swiss snowboarder concocted a trick called YOLO (You Only Live Once) that would ultimately outshine White’s moves in the Halfpipe and seal his 2014 Sochi Winter Olympics Gold, inevitably sending the American icon home winless. Kia’s formula is what I-Pod calls inspiration, adaption, and evolution!

Power manifests from a 5-liter GDI (Gasoline Direct Injection) V8 with 420 horsepower and 376 lb-ft of torque. It’s wedded to Kia’s first ever 8-speed automatic transmission with Shift-by-Wire technology and Snow mode which starts the vehicle in a higher gear. The K900’s power doesn’t languish whatsoever as it moves with aplomb at low and higher speeds. I found this out when trying to avoid two 18-wheelers at 70 mph. On the curvy Pacific Ocean coastal roads the vehicle was agile, but its suspension was not as tight as I had hoped. Kia is introducing the V8 first to meet all expectations and then will release a $50,000 V6 model later down the line. Also keep in mind the 10 year/100,000 warranty is a Kia staple with five years of roadside assistance.

The VIP package is a must have for just $6,000 since it amplifies your relaxation pleasures and safety assurance. The magnificently quiet cabin (due to advanced noise insulation technology) was further upgraded with a white on black digital 12.3” LCD TFT Instrument Cluster; Advanced Smart Cruise Control; Power Reclining Rear Seats;  Advanced Vehicle Safety Management package; and a color Head-up Display which flaunts info such as vehicle speed, warning icons, and turn-by-turn navigation. The long day of driving was enjoyable and relaxing. I jammed to Bob Marley and Bruce Springsteen while filtering through the symphony of innovations thinking to myself, “This is a Kia!”

So what’s the caveat? There are none. Kia feels good about the timing of the K900 launch and seeks expanded opportunity in a marketplace where traditional luxury brands have come down to join the volume and value segments. So why shouldn’t Kia elevate their game? Only time will tell if Kia’s decision was smart or risqué. But for now, give them the benefit of the doubt for being a courageous trailblazer. How else could a company launch 16 all-new or significantly redesigned vehicles over last the five years?