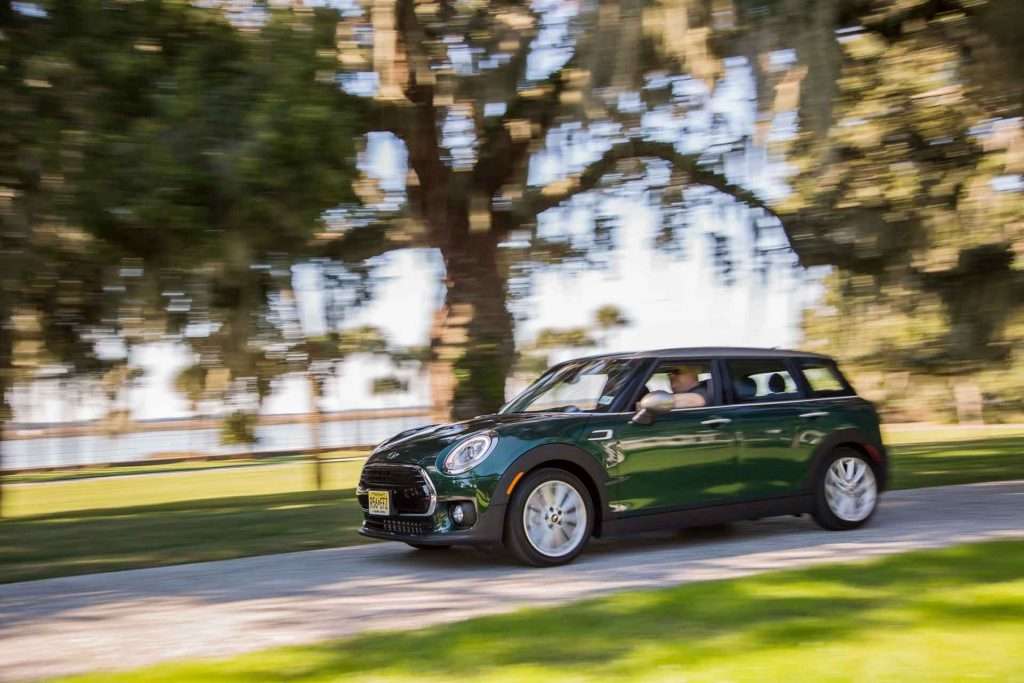 MINI has begun to loosen its traditional British accent here in the United States and targeting consumers in need of hauling more, preferably adults and children in my case. The 2016 MINI Cooper Clubman stretches longer (168.3”) than any other MINI built and is also the widest at 70.9”. I should also mention the unique rear split doors which extend its total to a whopping six. There is now more MINI to love.

Automotive Rhythms was recently invited to the South for an informative evaluation in Georgia’s oldest city. Savannah is an area rich with history and mystique, whereas the same can be said for the new MINI Clubman. Rightfully so, the brand chose to share its latest creation amidst beautifully aged trees with hanging moss and haunted houses. The ghost of MINI’s future suggests a bigger picture for the company, harnessing British tradition with a newfangled take on the iconic design befitting its “seriously playful” maxims. A future that welcomes the past, the Clubman takes note of the Clubman Estate which in 1969 replaced the Morris MINI Traveller and Austin Seven Countryman, created to represent road trip options for MINI enthusiast in the 60s. Introduced in 2007 as a similarly stretched MINI hatchback, the 2016 MINI Clubman is more novel than it is familiar, with a refined identity and sporty flavor.

For one, the Clubman receives some of its inner cool from BMW, which is behind its engine and architecture. This can be felt emotionally within the cockpit to the ride’s quick response and assured handling. There is the 2-liter inline 4-cylinder engine with TwinPower Turbo in the Cooper S Clubman that provides 189-horsepower. Then you have the 1.5-liter inline 3-cylinder TwinPower Turbo engine and 134 horsepower in the Cooper Clubman model. Each is paired with the standard 6-speed manual transmission or owners can upgrade to the 8-speed Steptronic for the Cooper S Clubman (a first for the brand) or the 6-speed Steptronic in the Cooper Clubman. I was able to open the vehicle up to see that the 3-cylinder is very capable and will be enough to satisfy most. Those who want more should opt for the Cooper S. The 4-cylinder exudes that go-kart feel and sound synonymous with MINI adventures. When driving the Cooper S Clubman there is an immediate acknowledgment of more torque (207 ft.-lbs. compared to 162 ft.-lbs.) which pushes the fun meter closer to the zippy and smaller MINI Cooper S. Of course some agility is lost from the latter, but you will likely be carrying precious cargo in this larger vehicle, so a little restraint is actually a good thing in this case. 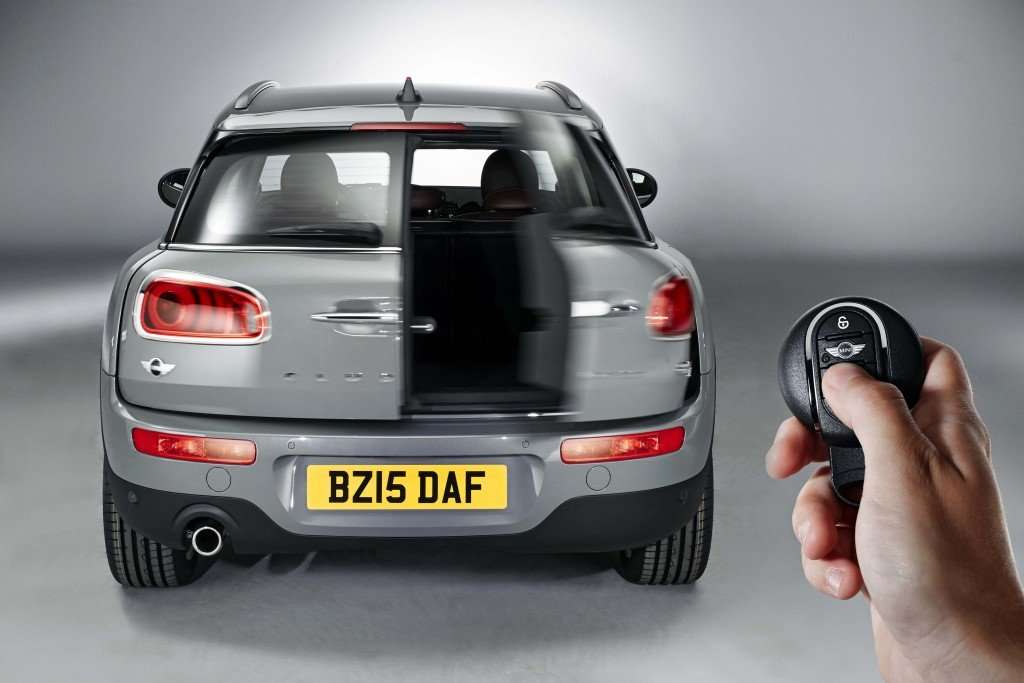 It is very obvious that MINI took their time manifesting the new Clubman, six years to be exact. The exterior lines are clean and precise while the metallic paint shines like patent leather oxford shoes. Specifically, there are twelve hues to decipher from with two totally fresh options: Melting Silver Metallic and Pure Burgundy Metallic. The split doors, rear lights and chrome accents add unique flair like a shawl lapel to a tuxedo jacket. Its ride maintains a certain level of sophistication but is never uptight with the lively interior, atmospheric lighting and the projected MINI logo illuminating the ground from its side view mirrors at night.

Can you say love at first “sit”? The leather seats are some of the most comfortable I have sat in and the fabric renditions in the base model were also cozy. The cabin allows for enough room to situate three adults comfortably in the rear which was unheard of in a MINI until now. The standard 6.5” color LCD handles navigation and media functions and is activated by a center controller. The Clubman is also efficient on gas and the environment with 35 MPG highway and 25 MPG in the city, and is categorized as a super ultra-low emissions vehicle. 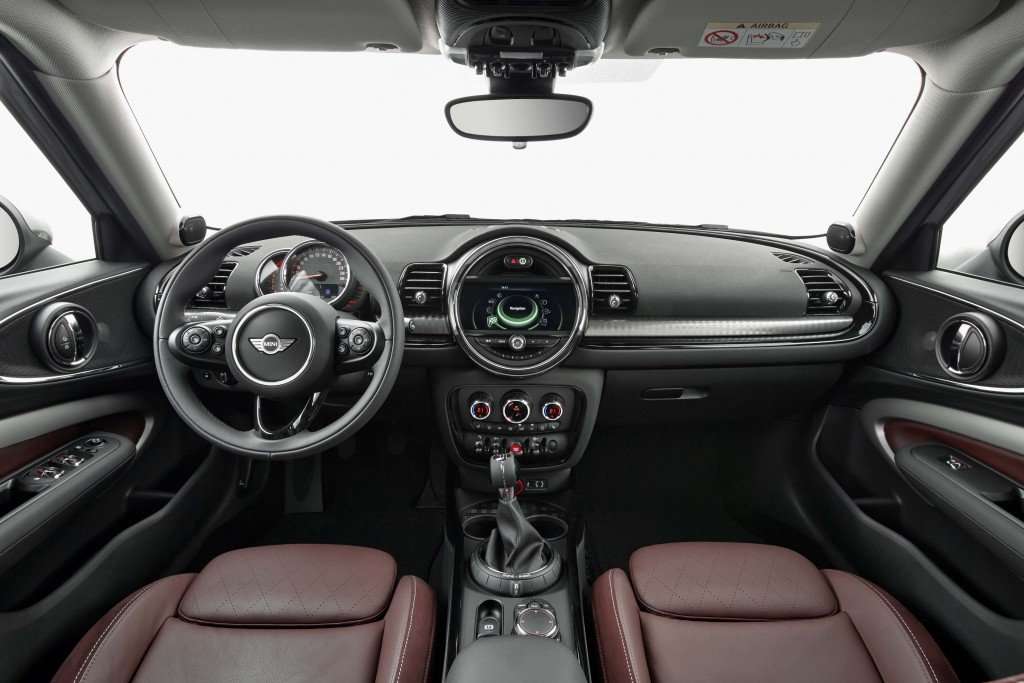 The larger dimensions of the Clubman offer a new perspective to MINI and may be just what the on-the-go parent of midsize families need. Having tested a MINI Cooper S a few months ago I remember less about the fun driving and more regarding my three kids complaining about their cramped riding experience. While the Clubman’s size may upset some MINI purists, it will be equally welcomed by those in need of additional space.

Tested on French and German racetracks, roadways and tailored in Oxford, the MINI Clubman has undeniable character. The slight growth spurt in the Clubman makes for a more functional and passenger-friendly experience and takes MINI from being a novel idea to a practical reality for daily commuters.