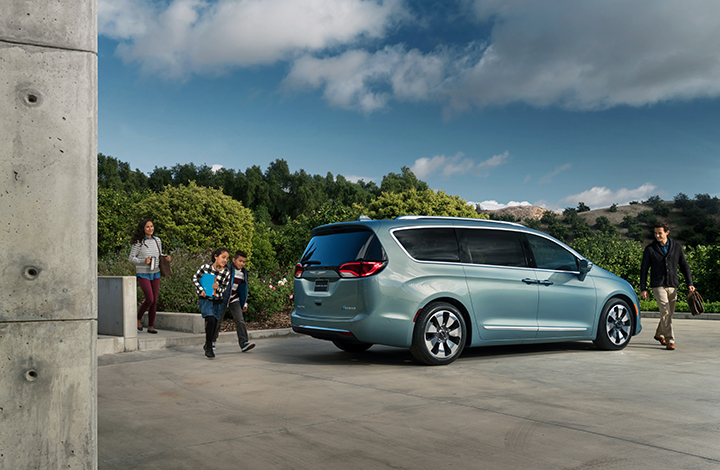 It was a most auspicious day in Santa Monica, California leading up the LA Show as I enjoyed a full day in Chrysler’s first ever plug-in hybrid minivan. The new Pacifica has already showcased to the downsized segment what it takes to be a boss and how to entice family oriented consumers looking for talented features and astounding character traits. Combine this newfangled people mover with an electrified platform and now you have both an eco-friendly and majestic minivan to satisfy the senses of soccer moms and fit fathers alike.

Offered in two versions – the $41,995 Pacifica Hybrid Premium (plus a $1,095 destination charge) and the $44,995 Pacifica Hybrid Platinum (plus a $1,095 destination charge) – customers can receive a $7,500 federal tax credit and local and state incentives for going green. For short daily commutes and running errands you could conceivably go the entire week utilizing just the Pacifica Hybrid’s 30-mile all electric range or tap into the vehicle’s total reach of 530 miles for holiday drives or longer weekend getaways.

As the most awarded minivan of the year the Pacifica continues to reward Chrysler with greatness including continuous month-over-month sale increases since launching in April. With a new platform the Detroit minivan provides owners with a stretched wheelbase, widened track, bigger wheels and a tapered roofline. No longer is it boring with a mundane identity. The Pacifica is full of gadgetry inside and flavor outside including the choice of 10 paint tents. 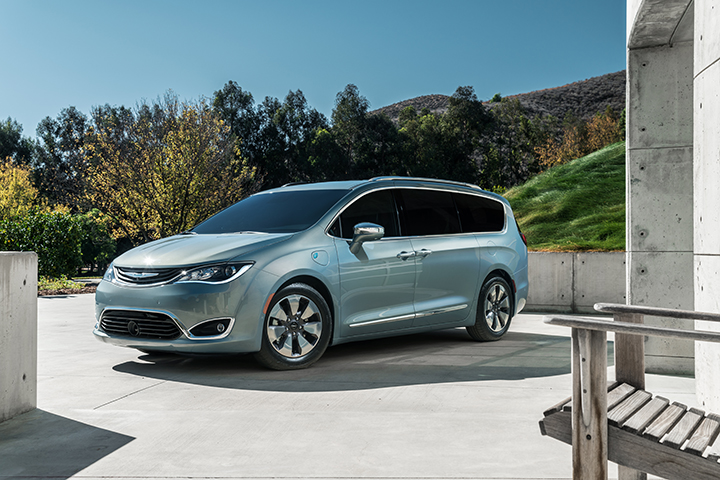 The fundamental differences between the gas model and hybrid version are the removal of the 2nd-row Stow ‘n Go seats and the absence of the built-in vacuum due to the placement of the battery and other hybrid elements. The downside is that each seat weighs 68 pounds and is quite a workout to remove. The 2017 Chrysler Pacifica Hybrid also inherits its own grille, features chrome on the front fascia, gets a unique charge point door and receives 18” specific wheels. The Silver Teal hue is the hybrid’s statement color while the E-Leaf can be found in various positions. In fact, the color palettes selected signify environmental friendly attributes. Designers traveled the world to places like Juneau, Alaska looking for the precise combinations. The inside of an ice cave at the remote capital represents freshness and openness for example. This icy blue tone (Anodized Ice Cave) is utilized as the accents with Ice Blue stitching elevating the seats.

“No other vehicle in the marketplace can move people or cargo like the 2017 Chrysler Pacifica, and adding electrification technology to that equation means even more efficiency for customers,” said Tim Kuniskis, Head of Passenger Car Brands, Dodge, SRT, Chrysler and Fiat, FCA – North America. Most importantly, the driving experience for customers remains unchanged – the vehicle operates in electric mode whenever possible and seamlessly transitions to hybrid mode when needed.”

Behind the wheel of my Bright White Clear Coat (exterior) and Black/Alloy (interior) test vehicle everything was similar as when I drove the gas model including the ergonomically friendly center console. Of course the power range is different but it didn’t feel like it was lacking in performance for a van typically loaded with people and items. The hybrid system is comprised of Chrysler’s well-known 3.6-liter Pentastar V6 engine, the eFlite electrically variable transmission (EVT) with two electric motors which both can power the wheels, a 16-kWh lithium-ion (Li-ion) battery pack and regenerative braking capabilities. With the Pacifica Hybrid the vehicle will run in electric mode as often as possible and seamlessly switch to gasoline power when the battery is depleted or extra acceleration is needed. With a total of 260-horsepower the hybrid can be juiced from either a 110v outlet taking up to 14 hours or the faster 240v which only requires two hours. Since a minivan is typically centered around children you must be careful because it is extremely quiet and may not be heard or noticed by distracted beings running around.

In addition to the minivan’s Uconnect Access smartphone app there is also Hybrid Electric Pages that gives operators hybrid activity information, allows them to schedule charge times, provides a recap of how many miles were driven in either electric or hybrid mode and also shows graphic power flows so you know what your Pacifica Hybrid is up to. Moreover, the minivan’s hybrid-specific cluster showcases various vehicle info on a 7” display such as the “efficiency coach” to help guide drivers in using the Pacifica Hybrid optimally.

Inside Chrysler focused on widening the space and fine-tuning every aspect of the interior like the four knobs, trays and pullout cup holders. The Pacifica Hybrid Premium enhances the experience with Nappa leather seats, 3-D Navigation for the 8.4” flush-mounted Uconnect touchscreen infotainment system, the tri-pane panoramic sunroof, a two-toned steering wheel and Uconnect Theater with dual 10” screens (rotate up from the seatback) using HDMI to watch a movie or play games. USB connections are omnipresent within the Pacifica so no one has to worry about dying batteries.

Of course my time in LA was joyful but also stressful due to typical traffic in the City of Angels so I felt safe knowing Chrysler instills the Pacifica Hybrid with an array of safety technologies. Depending on your package you may have 360-degree Surround View Camera, ParkSense Parallel/Perpendicular Park Assist, Adaptive Cruise Control with Stop and Hold, Blind-spot Monitoring, ParkView rear backup camera, Forward Collision Warning-Plus or LaneSense Lane Departure Warning-Plus. This is pretty impressive for a hybrid minivan! Expect dealer arrivals early 2017.