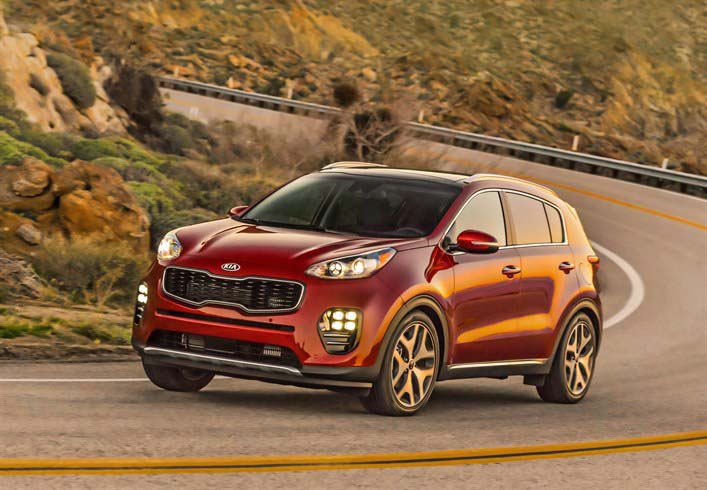 Since my lifestyle is as active as a herd of wildebeest traversing African lands I’ve evolved to a penchant for SUVs and CUVs that replicate the exact or similar pillars in my world. I run, hike, bike, kick and shoot balls and train others seeking to take control of their health. That means storage, utility, AWD, music based technology and a bit of power are essential attributes in the vehicles I choose to drive. Well, Kia is no stranger to this recipe and just recently strengthened their position with the launch of the 4th generation 2017 Sportage, which is also their longest running model in the lineup.

To get a taste of the new bells and whistles of the edgy, little CUV the Fit Fathers team headed to the Gas Lamp District of San Diego where we would spend a few days touring the region’s wandering roads, mountainous panoramas and county landmarks. Offered in three models — LX, EX and SX Turbo – the all-new Sportage sets the tone with a $22,900 price point for a FWD LX loaded with a litany of standard functionality such as a rear spoiler, 5” touchscreen with Rear Camera Display, a Drive Mode Select with Normal, Eco and Sport modes and LED daytime running lights. It’s powered by a 2.4-liter Gas Direct Injection (GDI) 4-cylinder with 181-horsepower (also on the EX) and paired with Kia’s 6-speed automatic transmission.

“In 2015, the final year of production for the outgoing Sportage model, sales were up 25 percent, which speaks to the appeal and staying power of that vehicle, and with our aggressive pricing strategy for the all-new 2017 model, we’re looking to continue that momentum,” said Michael Sprague, chief operating officer and EVP, KMA. 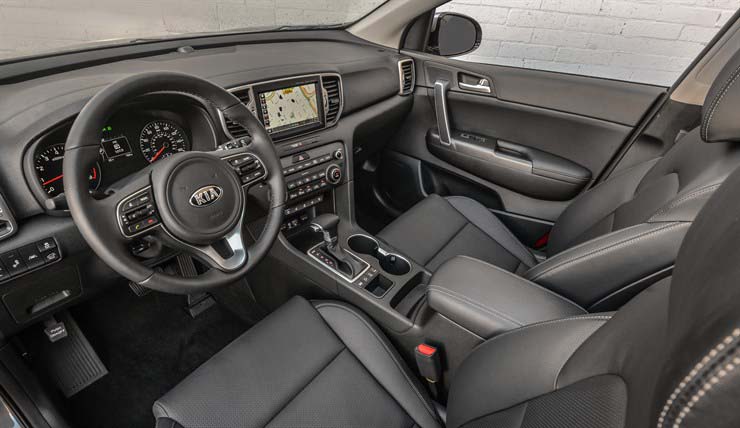 For the road experience my drive partner Holly Reich and I chose a Pacific Blue Sportage SX AWD with a black, stylish interior trim (one of five interior hues), which was far from inferior in comparison to some of its competitors. From the knobs to the technologically laden center stack to the wide sunroof, everything felt superior. It was boosted with sharp 19” alloy spins, dual exhausts and the latest AWD system. All vehicles on this press trip were blessed with the 2-liter Turbo GDI 4-cylinder with 240-horsepower and 260 lb.-ft. of torque between 1,450-3,500 rpm and the aforementioned 6-speed automatic. I must say, during a skilled highway maneuver I had to cross four lanes before existing which required acceleration before slowing down. Aptly, the Sportage provided the juice and the visibility for the move. Bigger brakes and a sports tuned suspension on the SX Turbo also added to the skillfulness of the smaller CUV.

The Sportage SX Turbo comes in at $32,500 and features the Technology package, skid plates on the front and rear, Dynamic Bending Lights as part of the bug-eyed HID headlamps, LED tail lights, metal pedals hard like heavy metal, a hands-free Smart Power Liftgate and paddle shifters situated on the thick, thumb-imprinted steering wheel. To go along with the stiffer and safer chassis, a Magna Dynamax AWD is available on all models for $1,500 and is a must-have on the east coast where I reside in Maryland. After the harsh winter we had there is no way I’m rolling without AWD and snow/ice tires. Amazingly the Magna Dynamax system is enhanced with torque vectoring which allows the locking center differential to also provide torque to each individual wheel. More importantly, it’s intuitive and predictive and uses software to determine your driving habits over time.

Introduced in 1994, the Sportage of today is far nobler than its ancestor in every category. Designed in Germany and Korea and tuned at Kia’s California Proving Grounds, the newfangled Sportage has a chiseled physique with a triangular stance that is now longer and wider. Alloy wheels sizing in 17s, 18s and 19s are pushed to the corner for optimal maneuvering while the lower, wider grille is highlighted by “Ice Cube” LED fog lights. I’m wondering if O’Shea Jackson is digging them, especially since Kia is so musically oriented. It helps them reach their consumer base and diverse markets. 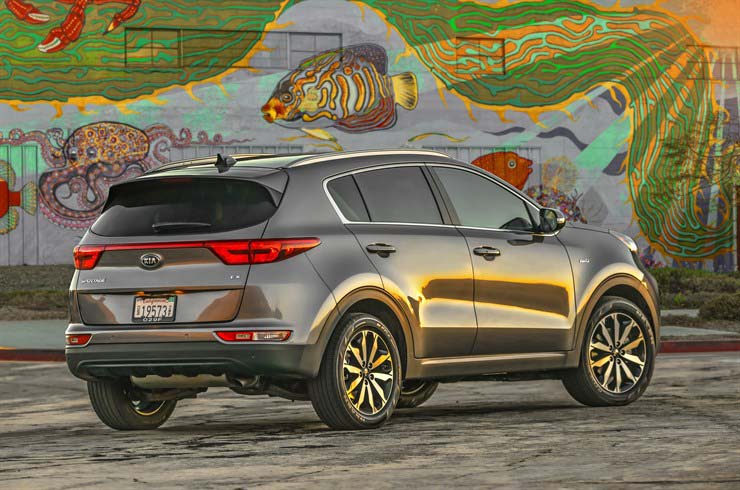 Just like Kia I have an adoration for music — Roots, Rock, Reggae to be exact — so Bob Marley, Peter Tosh, Junior Gong, Burning Spear, Wailing Souls, Junior Murvin and Raging Fyah were spinning for the entirety of our drive. Holly was also delighted by my selections. Our ride was embedded with the Technology package (a $2,700 stand alone option) which comes with a smorgasbord of amenities such as the 8″ touchscreen with onboard navigation, Android Auto (Apple CarPlay also available), UVO eServices telematics and a Harman Kardon audio unit with game-changing Clari-Fi technology (cleans up sound distortion from compressed audio files from satellite radio, MP3s, etc). That’s 320 watts, 8-speakers and the 3rd Gen UVO 3 software in a Sportage!

From behind the wheel and in the passenger chair I felt comfortable and not squashed as I do in many petite utilities. Kia increased the front and rear legroom, amplified the cargo space by 18% and inserted a dual luggage floor which is perfect for separating sports gear from groceries. Standard safety measures are plentiful in the form of Electric Stability Control, side curtain airbags, Downhill Brake/Hill-start Assist Control, Rear­Camera Display and much more. The SX receives even more with a Blind Spot Detection System, Autonomous Emergency Braking with Pedestrian Detection System and Front and Rear Parking Assist Sensors. Also, towing capacity for both the AWD and FWD Sportage is 2,000 pounds with trailer brakes and 1,650 without. Perfect for hauling motorcycles or the Fit Fathers fleet of mountain bikes. Of course the best fuel combination is 23 city MPG and 30 highway MPG in a FWD LX. Our SX AWD achieves 20 city MPG and 23 highway MPG.

Together the Sportage and I kept one another active and full of energetic vibes. Before and after my drives with the CUV I hit San Diego’s Embarcadero Park for an 8-mile training run on day one then a 4-mile cool down on day two since I was preparing for the Rock ‘n’ Roll Half Marathon back home in D.C. I refueled with a quinoa, bean and veggie bowl. Hey, if my ride feels good then I also want those positive vibrations. Remember, stay active, have fun and continue to invigorate your life!