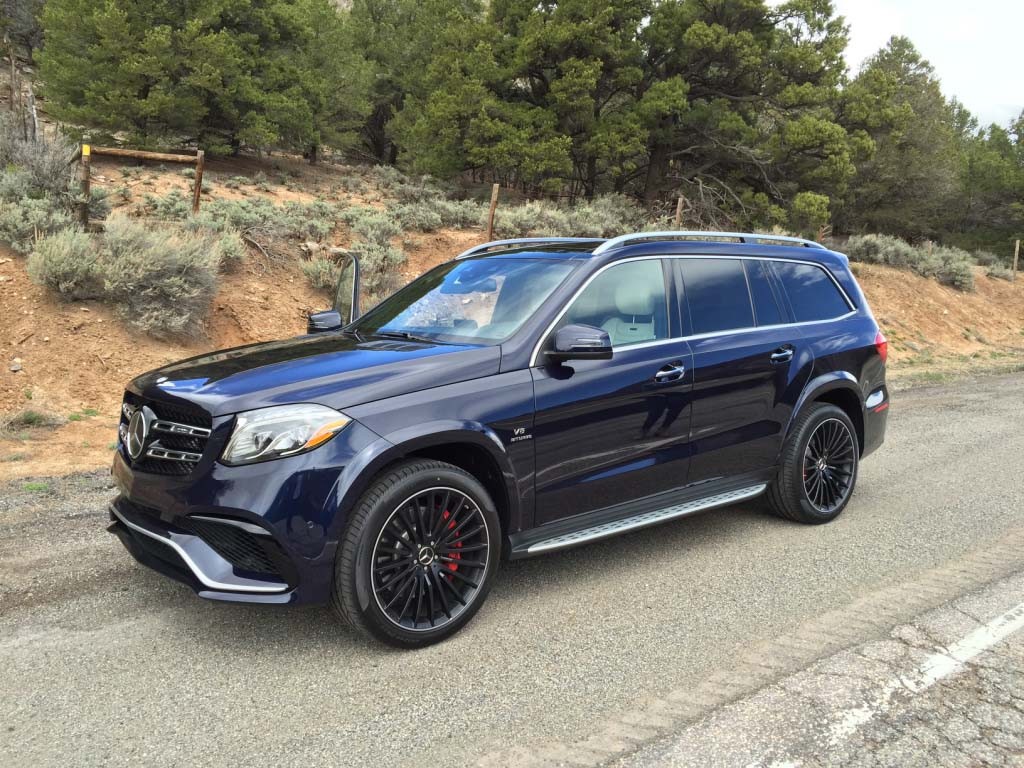 There are not many large, luxury SUVs that are absolutely, positively incredible. Most offer pure opulence but no bravado while others focus only on the macho elements of utilities in a world where only a small percentage of customers take their pride and joys off road. Well, the refreshed and re-dubbed prodigy from Mercedes-Benz proposes the best of three worlds — lavishness, technology and stoutness — in one complete package.

Like a visit to Walt Disney Parks and Resorts, the contributions of the 2017 Mercedes-Benz GLS including the reinvigorated interior are pretty magical. My experience test-driving the GLS range — including the AMG GLS63 — in Gateway, Colorado was impeccable to say the least. Tagged as the S-Class of the M-B SUV line due to an altered naming convention, the luxurious touring utility is fit for influential families looking for advanced technology, three rows of seating (standard), 4-MATIC AWD (standard) and diverse engines (four in total) to choose from including an economical diesel and the potent, hand-built 5.5-liter V8 Biturbo with 577 runaway horses. With this authoritative AMG variant I doubt parents have to worry about arriving late to the kids’ practices. 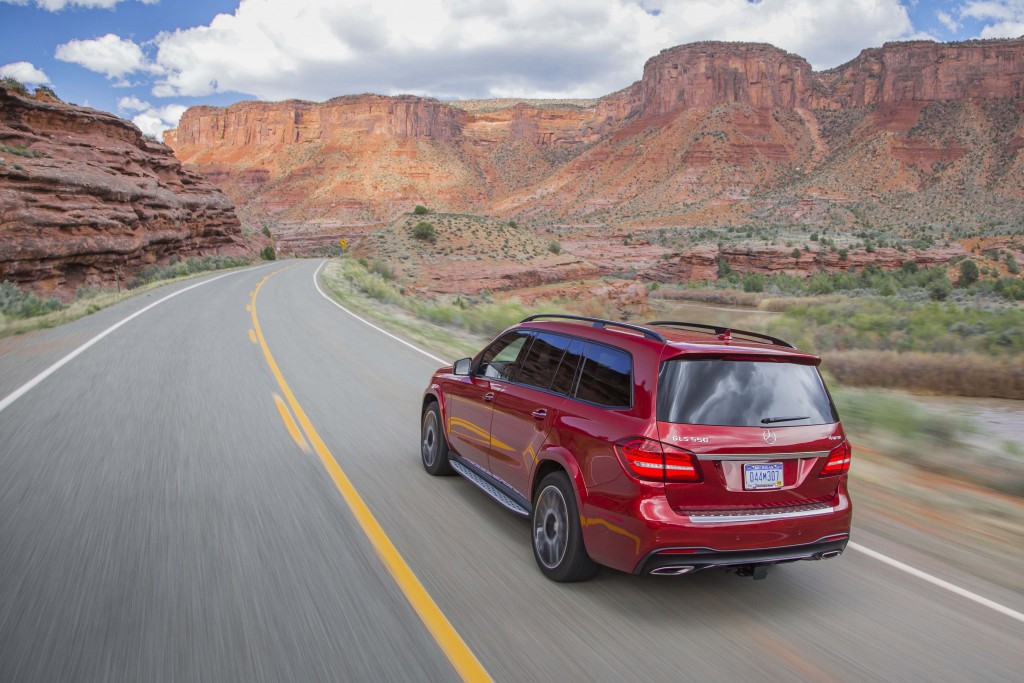 Shortly after landing into Grand Junction Regional Airport an assortment of GLS models were awaiting for evaluative drives in route to the enchanting Gateway Canyons Resort nestled within the enthralling Red Rock Canyons. Life is so pure, simple and beautiful in Western Colorado that it was almost difficult to focus in on the task at hand. Well, until I was handed the key to my German chariot. This is what you call double the pleasure. Obtainable in four models — GLS350d 4MATIC, GLS450 4MATIC, GLS550 4MATIC and the aforementioned AMG GLS63 — Mercedes has positioned itself smartly for the diverse group of core, large-sized SUV buyers. Especially in correlation to pricing which can range from $67,050 for the 255-horsepower (457 lb.-ft. of torque) 3-liter V6 Turbo Diesel to $124,100 for the AMG.

Some of the noticeable differences with the GLS in comparison to the old GL (launched in September 2012) are a bolder front and rear fascia (especially the menacing chin spoiler), the new dash and interior including the 3-spoke multifunction steering wheel, a newfangled grille, new bumpers, new LED taillamps, the 9G-TRONIC automatic transmission with wheel-mounted paddle shifters and DYNAMIC SELECT with its assortment of transmission driving modes. The AIRMATIC air suspension with Adaptive Damping System has also been enriched to respond more adeptly to various road conditions. Working in concert with the transmission, DYNAMIC SELECT allows the operator to pre-select the setting most appropriate (up to six settings) for the task at hand whether for sporty driving or tackling snow-covered roads. You can also raise the suspension up to 12.5″ with the Off-Road Engineering package. A bevvy of new light-alloy wheels is also at your disposal. I became fond of the unique 21” spins standard on the GLS550 as well as the stationary and illuminated running boards. Another favorite is the 7,500 towing capacity from the factory available Trailer Hitch ($575). It’s a must for dads such as myself that bike often with the family and occasionally tow small trailers. 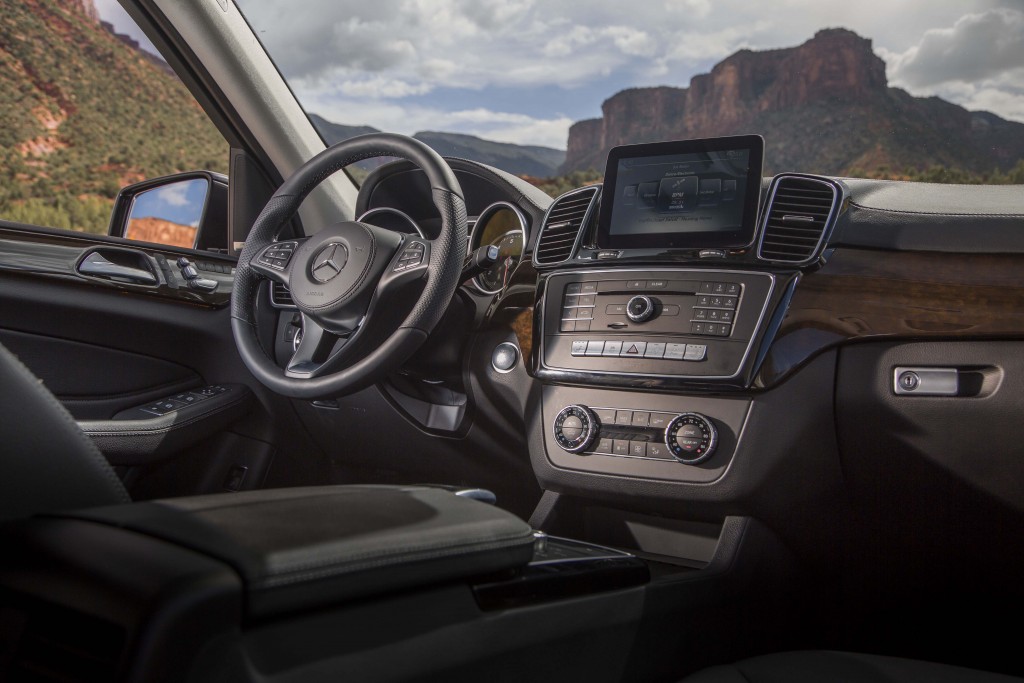 Some may say I was hustling backwards since I began the tour from the airport in the AMG then subsequently dumbed-down my options to the GLS550 and lastly the GLS450. Well, I didn’t mind starting off in greatness. Inclusive in the full price of $131,470, my Lunar Blue Metallic AMG GLS63 was endowed with a Carbon Fiber trim ($1,590), Porcelain/Black Exclusive Nappa Leather, 22” AMG Matte Black rims ($1,750), AMG Sport Suspension, quad pipes, the Power EASY ENTRY ($400) one-button, flip folding seat technology for entering the third row area conveniently and the Rear Entertainment System ($1,950) with 8.3″ screens located on the seat backs of the powered, heated, ventilated, multicontour and massaging front row chairs. With the force of hurricanes powering the 5,754 lb. AMG the vehicle blows from 0 to 60 mph in 4.5 seconds. Honestly, it was challenging keeping it under 60 mph, even when applying light pedal pressure. Imagine that! 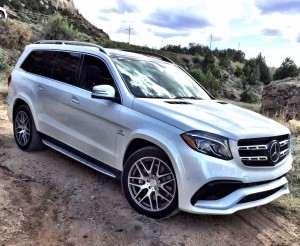 Day two would see us cruising to Arches National Park near Moab, Utah then on to Sorrel River Ranch for a healthy lunch. A $99,105 ($93,850 MSRP) Iridium Silver Metallic GLS550 4MATIC would be my ride over and a $78,550 ($68,700 MSRP) GLS450 4MATIC would escort me back to Colorado. Power in the 550’s 4.7-liter V8 Biturbo engine was impressive as the 449-horsepower felt more like 500, even in the higher altitudes. In this vehicle I paid more attention to COMAND’s infotainment and navigation features, the harman/kardon LOGIC7 surround system and Apple CarPlay. Of course I love how the interface of your smartphone is replicated on the 8” color COMAND screen such as music and audiobooks, but keep in mind Apple CarPlay also overrides the vehicle’s own apps and functions so you won’t be able to use any of them except the radio. Lane Keeping Assist is pretty aggressive and feels like a jolt when you drift outside the lane without signaling so stay focused. Although the 9-speed transmission is pretty efficient the mileage on the 4.7-liter is not. Expect only 13 city and 18 highway estimated mpg in the GLS550. This is why I would personally opt for the 362-horsepower 3-liter V6 Biturbo in the GLS450. In this case the GLS achieves approximately 17 city and 22 highway mpg.

Available now (diesel coming at a later date) the GLS will help fortify Mercedes-Benz’s position in a growing utility market that is eager for grander products which present car-like agility, artificial intelligence and sport utility adventure.