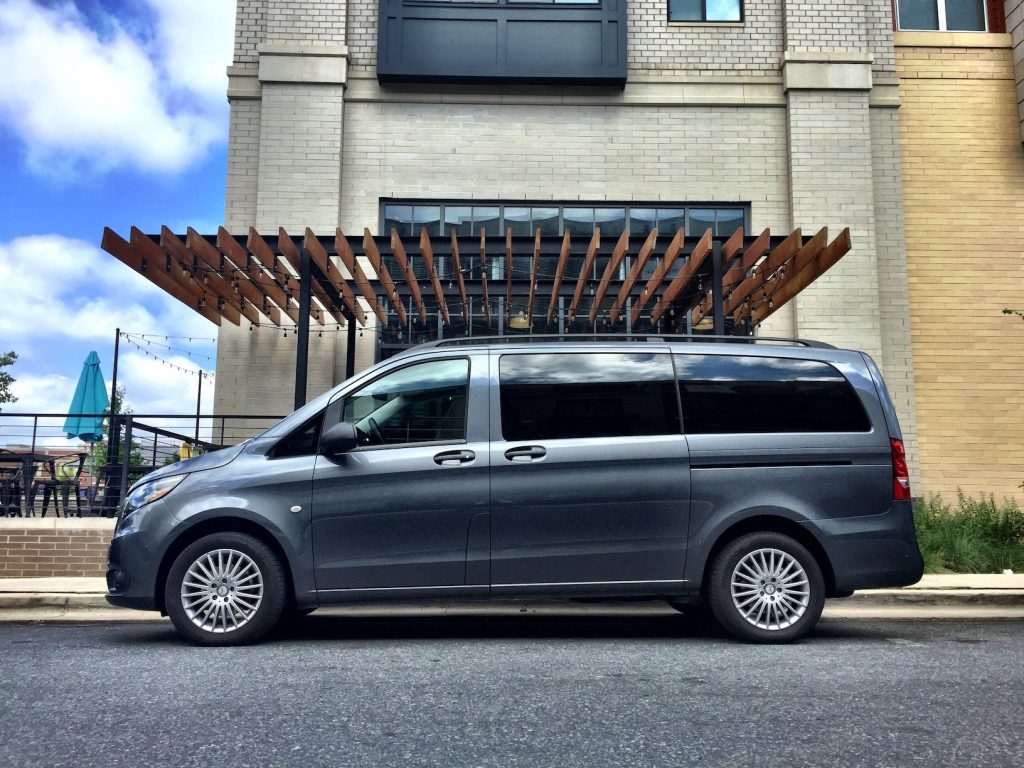 It’s amazing how everyone was laughing at me when I pulled up in a Grey Metallic passenger van with smaller 20-spoke 17” light alloy wheels in Hankook Ventura S1s like a middle school bus driver. Yet, the joke was on them because the extended 4th of July Weekend presented various scenes of jubilation and the need to transport “Mobb Deep” crews around from birthday parties to shopping outings. So at the end of the week I was the savior along with my starship cruiser from Mercedes-Benz known as the Metris.

With a suggested retail price of $32,900 the Metris I tested was able to hold eight people comfortably utilizing three rows. After the optional accessories and packages it totaled $45,870. Coincidently, United Roofing and Siding was at the house to give us an estimate on the day the Metris arrived. The adjuster was dialed in since the German van was a top choice after research for the company business. His main interests included the amount of power and level of utility. Paired with a 7-speed automatic transmission, execution was not a problem being that the 2-liter, direct-injection and turbocharged 4-cylinder engine with 208-horsepower and 258 lb.-ft. of torque performed exceptionally, especially when using the paddle shifters on the sporty multifunction steering wheel. Even when loaded down I didn’t experience any downgrade in performance. 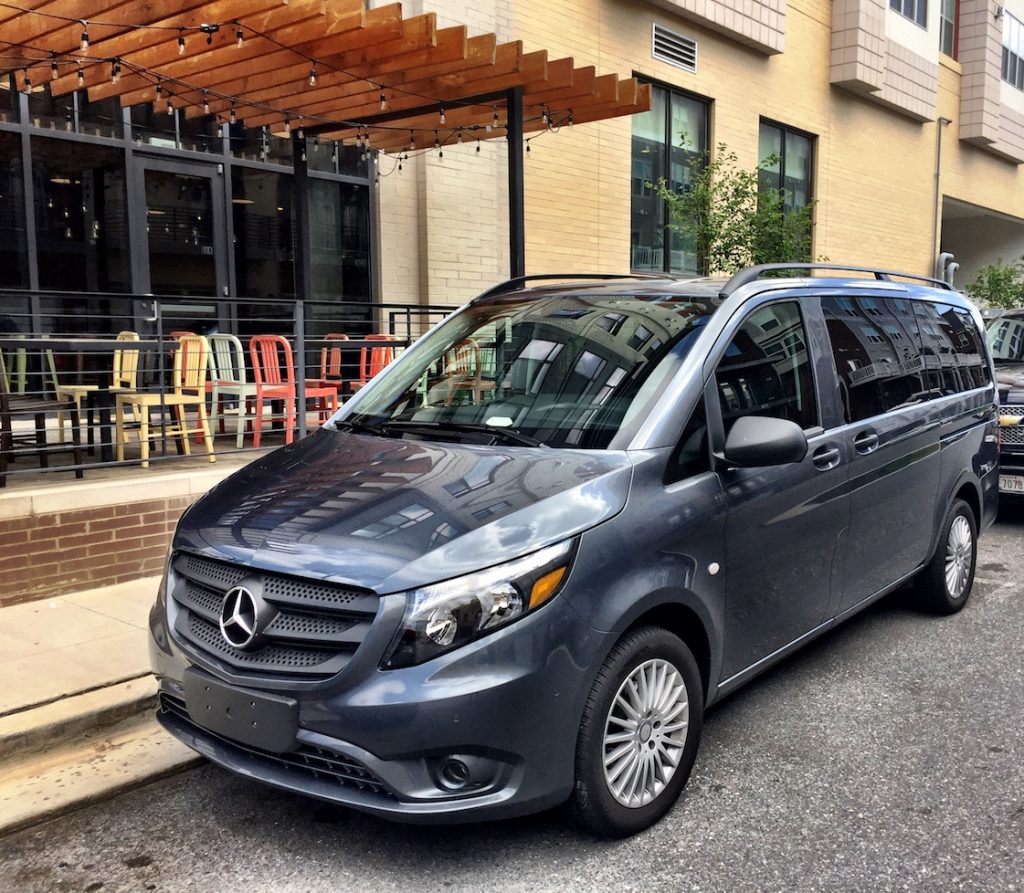 Our first festive activity of the holiday weekend was a birthday skating party for my youngest daughter who turned 11-years old. As you might imagine it’s easier to recruit kids for attendance if the parents are given the option of a ride. Thankfully I had the room and storage for four more skaters in addition to my family of four, and room in the back cargo area for gifts, balloons and party setup items. The middle row is split tilting for easy access to the third row so the kids had no problem getting back there. Our vehicle came with the optional Power Sliding Doors on each side for $760 each. The right door can be opened and closed using the key fob while both can be operated through either the handles, the switches on the center stack or the buttons on the inside of the B-pillar. One of the cooler features I noticed after immediately taking off was a warning highlighting the right door as being partially opened. I was about to pull over when the door simply self-closed allowing me to continue my pace without interruption. 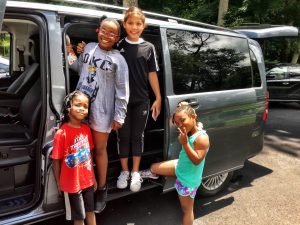 Although the Metris is pretty sizeable never did I have a problem parking or reversing. It sits high so you are able to see what is needed for maneuvering. The Rear View Camera as part of the Driver Efficiency Package ($1,750) was helpful as well. The Premium Safety Package with PARKTRONIC ($2,340) provided the Active Parking Assist, Collision Prevention Assist, Blind Spot Assist and Lane Keeping Assist which nudges the vehicle with a slight vibration if it crosses lanes without the use of the turn signals. Keep in mind the Single Flip-up Tailgate ($465) is pretty large so leave enough space between cars or walls for it to open fully. Also, I had to remove the middle seat headrests for a wider view span when looking through the rearview mirror. 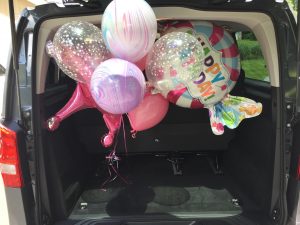 As stated, a van induces requests from all walks of life. I was subsequently put to work by the six adult females in the family who drove down to Maryland from New Jersey for the holiday. Including my mother and wife they collectively wanted to hit Target to purchase supplies for our upcoming Jamaica getaway. They also needed their Starbucks fix and then Whole Foods to reload on groceries for the veggie focused cookout. No problem! My 13-year old had the next demand to scoop up her gang of Goonies to watch Wonder Woman, take them to eat and shop, and lastly drop them off back home. So finally I decided on a day to myself and went mountain bike riding at Schaefer Farms in Gaithersburg, MD. To enter you have to drive along a gravel road which the Comfort Suspension ($720 Driver Comfort Package) didn’t have a problem adapting to. Mind you, I’m still operating off of one tank of gas with a half still to go. The Metris achieves 22 combined city and highway MPGs. 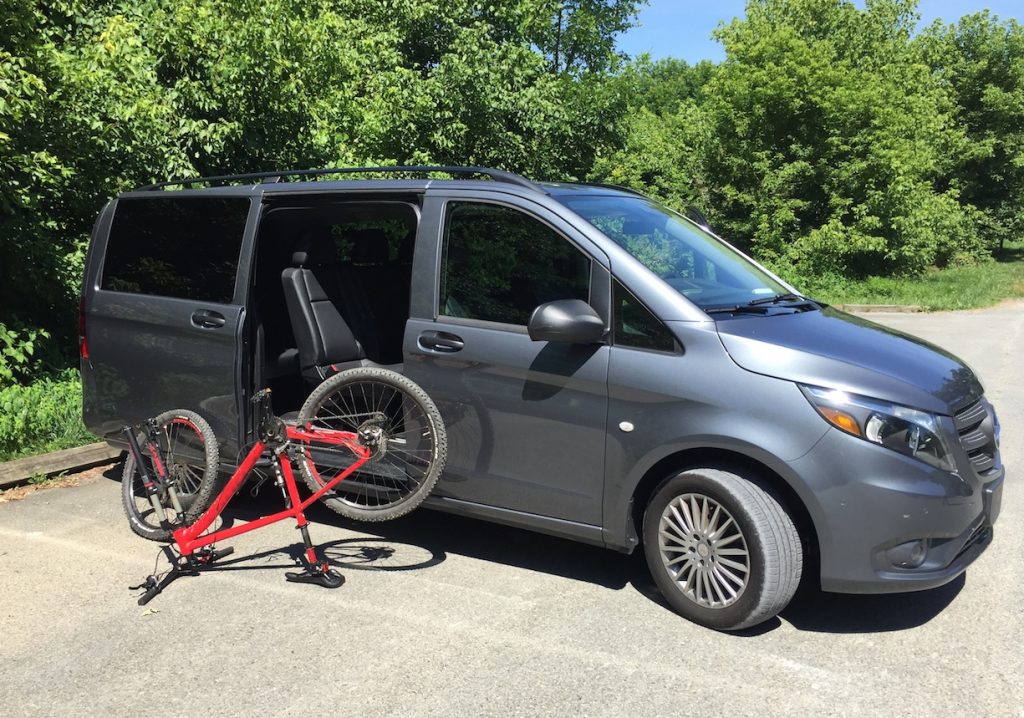 Inside, the Black leather cabin offered comfort to all and enough amenities for driver satisfaction including heated front seats, a USB port, smartphone connectivity, a 5.8” color screen, automatic climate control and an abundance of storage and pockets atop the dash, within the doors and on the middle console.

I still recall the fond days as a kid when pops would collect my cadre of cousins and friends in his Dodge Ram Van for an excursion to Cooper River Park in Camden, NJ. To him it might have been a small task but to us it meant everything. Rightfully so, it felt good being able to replicate that experience for my daughters and their squads in the 2017 Metris Passenger Van.