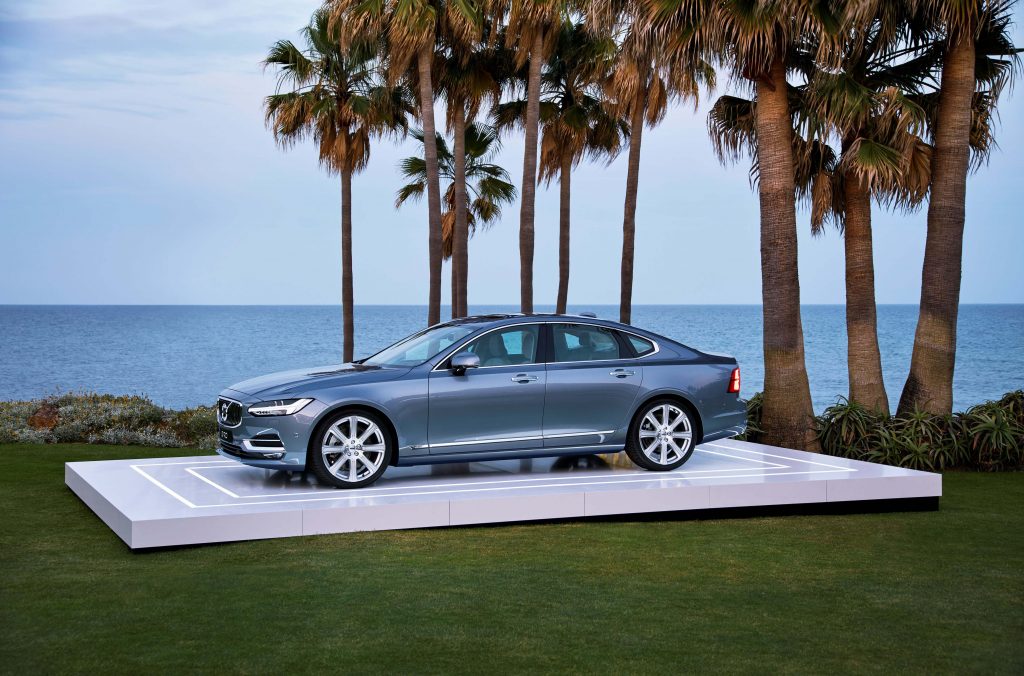 Good day from Malaga, Spain ladies and gentlemen. The weather was in tune for my task at hand and the culture of the country was expressive, unique and presented a tapestry of wonders to explore during the 4-day visit. I fell in love once again with the pure Mediterranean waters, the blue, enriching skies and of course the amenities of the ultra impressive 2017 Volvo S90 Sedan and V90 Wagon. Volvo’s indomitable safety engineering has always been a given, but now the Scandinavians have elevated the vehicle’s design cues and re-mastered its luxury accouterments to follow suite.

According to Håkan Samuelsson, President and CEO Volvo Car Group, the company’s brand transformation plan is moving along swiftly and entails the production of new models that follow their “Relaxed Confidence” philosophy. Customers are their top priority and management has vowed to keep them safe behind the wheel, offer ecstatic driving performance and simultaneously present fluid designs that inspire. Quite frankly this was a necessary move in order to evolve to a point of contending amongst Audi, Mercedes, BMW, Lexus, Acura and Infiniti. But I also wouldn’t leave out the next generation Hyundai Genesis either.

Volvo’s product assault began with the award winning and technologically-laden XC90 premium SUV. We drive an Audi Q7 currently but will keep our eyes on the XC90 when it is time to upgrade. This vehicle has won 140 awards internationally and started a new revolution for the brand. The S90 sports sedan is expected to do the same as well as the sporty V90 utility. Specified intentions include a steadfast outlook on Global Warming and reducing the auto industry’s carbon footprint as well as protecting people from traffic accidents. “Our vision is that by 2020 no one should be killed or seriously injured in a new Volvo car,” stated Samuelsson. 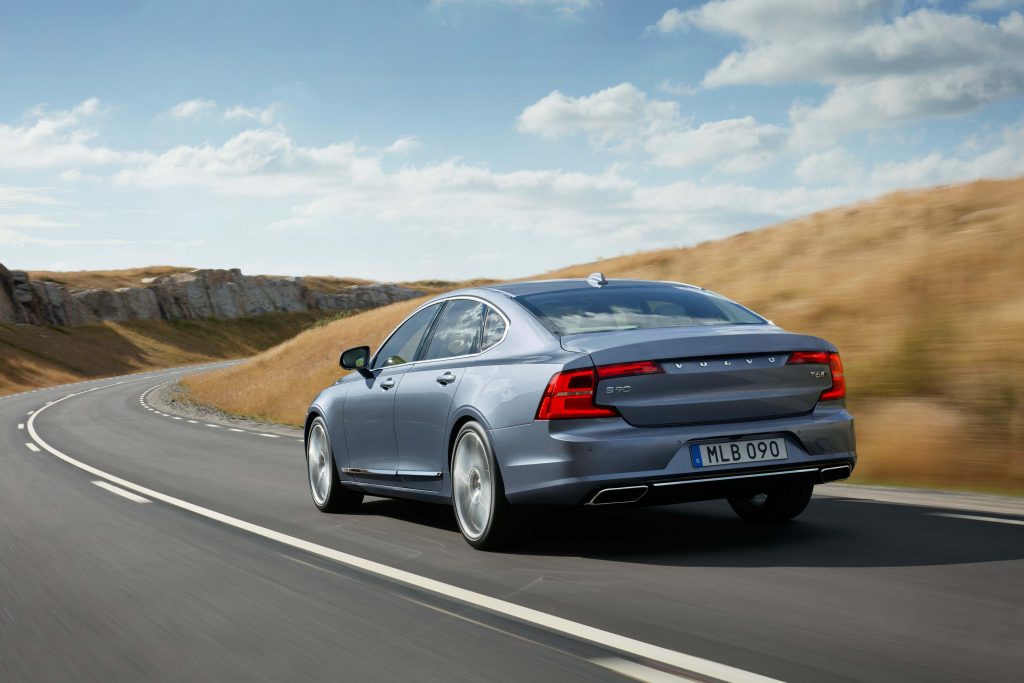 Safety has been, and will always be a defining footprint within their global perspective. Collision Avoidance by City Safety incorporates Low & High Speed Collision Mitigation (pedestrian and cyclists also) and the revolutionary Large Animal Detection (Day & Night). You will be happy to know that the new Volvos will self brake if a deer or moose jumps in your path before you have time react. With 1.3 million large animal incidents annually this is engineering I welcome wholeheartedly. In addition, Run-off Road Mitigation and Run-off Road Protection will align the vehicle back in its lane if it senses you swerving or drifting off the road.

Yes, the S90 and V90 vehicles are safe, full of grace and embedded with timeless technology for today’s human hyper pace. This is why Volvo had to develop heightened levels of infotainment and connectivity. To explore their design and tech philosophies deeper the team headed oversees for the first international test drives of each model. After a long flight from Washington Dulles I made it to Malaga where I was then escorted to the lovely Kempinski Hotel Bahia Estepona. Located in the province of Malaga, the area of Estepona is a popular tourist destination and costal town in Western Costa del Sol. Magnificent beaches, pleasing marina, a multitude of golf courses, historical museums and very unique attractions set this locale apart from the rest of Spain. Without hesitation I changed clothes quickly and hit the sun for an enchanting 3-mile run before dinner at Casa del Rey. The veggie paella was absolutely superb. Known as one of the top restaurants and wine bars in the region you can find the establishment close to the famed Plaza de las Flores in the old town of Estepona.

During my time with the S90 it made voluminous statements. The efficient 4-cylinder turbo and supercharged engine was expressive and felt more like a 6-cylinder and provides a formative drive experience while autonomous driving puts you in the scene of a Stars Wars feature. Offered in two engines in the U.S. as the T5 FWD Turbocharged with 250-horsepower or the T6 AWD Turbo and Supercharged with 316-horsepower, both are paired with an 8-speed automatic transmission. Four models of choice are available with the S90 T5 Momentum ($46,950), S90 T5 Inscription ($50,450), S90 T6 Momentum ($52,950) and the S90 T6 Inscription ($56,250). Some may like the lighter feel of the FWD but if a vehicle is available with AWD I’m taking it for sure. Whether for inclement weather or sports performance I simply enjoy the thrills and ultimate traction of four wheels. Relaxed Confidence has also made its way into the new suspension, which is similar to that of the XC90 and predicts mannerisms on the road. An optional Premium Rear Air Suspension ($1,200) is also available. Four selectable drives modes – Eco, Comfort, Dynamic and Individual – can be set by way of scroll wheel behind the engine starter which in-turn is behind the gear lever. 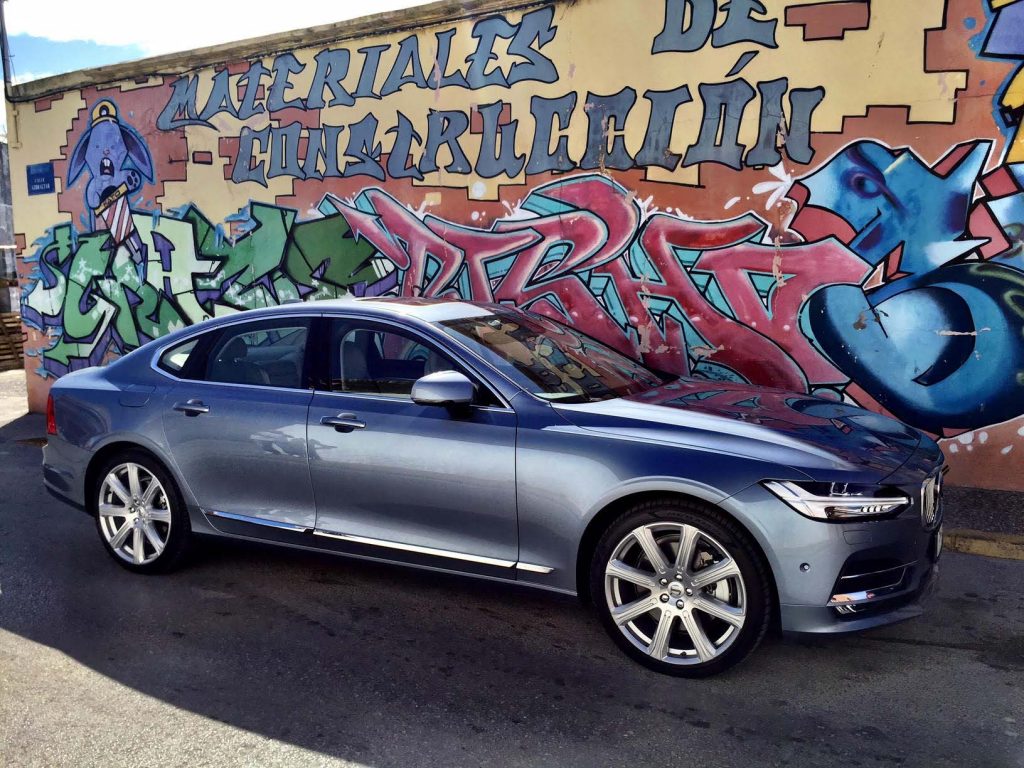 Consumers who purchase luxury transportation are just as vested into styling as performance so design is important to the Scandinavian culture and relevant to the business model. The S90’s presence is strong, fluid, dynamic and looks bigger than it drives while the V90 is the sexiest wagon on the market. And when have you ever used that adjective to describe a wagon? There are nine hues to decipher between, two are solids and seven are metallic. The 20″ 8-spoke alloys in Silver Diamond Cut go along nicely with the integrated dual exhausts tips and chrome framed grille. Our Mussel Blue S90 mirrored the tones of the Mediterranean succinctly as we drove through places like Sotogrande in route to witness the Rock of Gibraltar and all its splendor.

After a full day of touring we were back at the Kempinski Hotel Bahia to prepare for the culinary creations of top Chef Jordi Bataller on the foot of the serene lawn overlooking the water. The hotel’s own garden produces year-long rations of organic veggies, fruits and herbs for the Kempinski’s four restaurants including La Brisa, Alminar and La Cabana del Mar Beach Club. The morning of day two I found myself at the Kempinski Fitness Club to energize before another long drive.

Since we spend a good amount of time commuting Volvo focused intensely on the interior, aptly dubbed the Scandinavian Sanctuary. The goal was to establishment serenity and calmness when alone but still deliver entertainment and connectivity values. 4G LTE WiFi allowed me to FaceTime with the kids back home since my cell service was off. Of course I also posted shots of the car and Spain on social media in real time. The Sensus 9” digital display or center touchscreen looks, feels and operates like a tablet (uses infrared opposed to capacitive touch) with four tile systems that highlight the most used four apps such as Phone, Media, Navigation and Messages. Apps include Driver Performance, Spotify and Apple CarPlay to name a few. Swipe the screen to the left and a copious amount of technologies can be selected such as the 360° Surround View Camera (part of the $1,950 Vision Package), Head-up Display settings or Park Assist Pilot & Front Park Assist ($1,000). Another semi-autonomous feature is Pilot Assist that works well but made me nervous. It helps steer, brake and accelerate but the driver should always be ready to intervene. 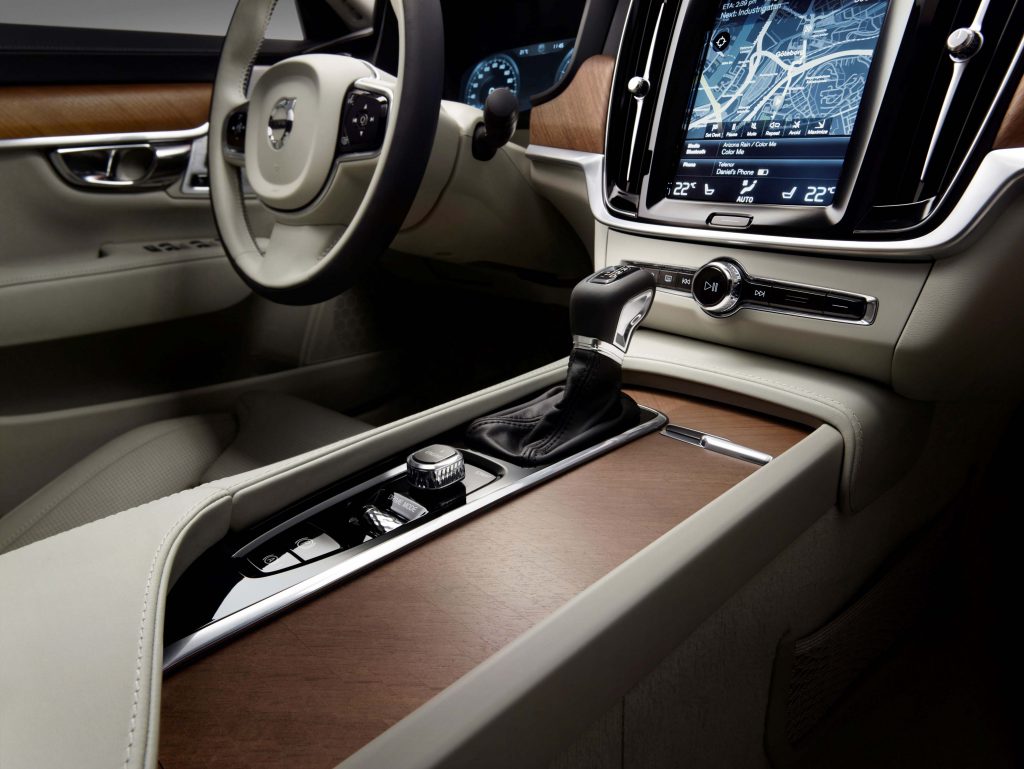 Opulence comes into play with warm tones that beg to be touched. They mesh with the leather dash and seats and Linear Walnut veneer inlays. The intelligent and comfortable seats took five years to develop and were also borrowed from the XC90. Their deformable brackets absorb impact energy (opposed to your back) when the vehicle is launched in the air and lands. The headrests are super cozy and a massage function in the front seats help ease the tension of long drives. However, the steering wheel is pretty thin and devoid of paddle shifters. I like my wheel thick and strong. Through the optional $2,650 Bowers & Wilkins 19-speaker audio system with three different sound modes (Studio, Individual Voices, Concert Hall) Bob Marley felt live and direct. Volvo also installed a cooled glove box in case you decide to put your coconut waters there.

The journey concluded in Malaga for a walking tour of the city and all its splendors including the Museo Picasso Malaga to experience some of Pablo’s 285 artwork documents. The painter was eccentric and loved fish eyes in his pieces. More importantly he never titled his works so I’m sure he wouldn’t mind Volvo in Spain for one of his works. It was a grand finally to an impressive media drive. Enjoy the gallery.