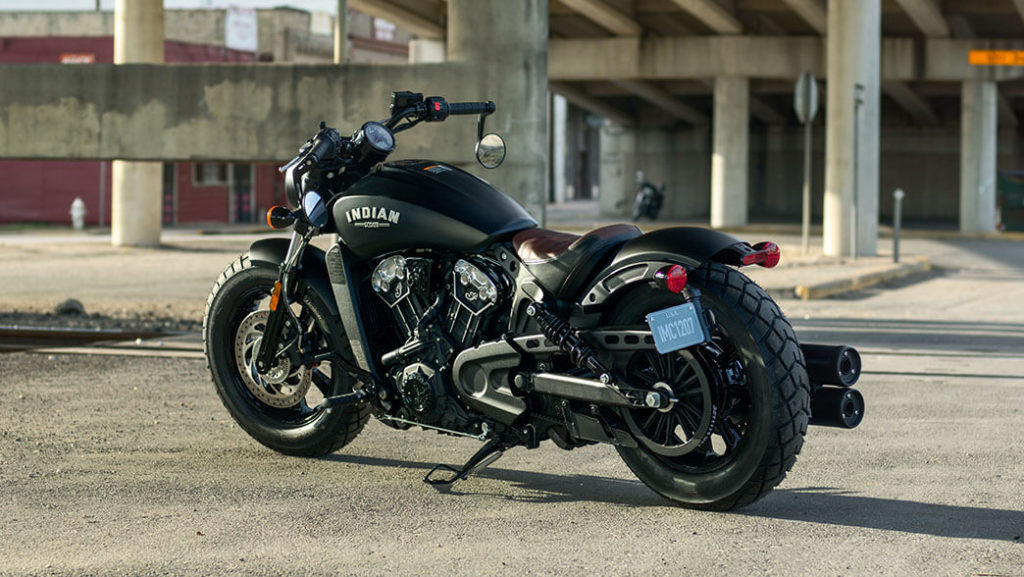 Contrary to popular belief, the Harley-Davidson Motor Company was not the first American motorcycle, having bowed in 1903 with their first bike. Indian was actually the first motorcycle manufacturer, making their debut two years earlier in 1901. Indian Motorcycles is now owned by Polaris Industries, who launched the iconic Indian Scout, marking the return of the legendary small American cruiser in 2015. The original Indian Scout was a 1920 model. Polaris was also the manufacturer of the popular Victory motorcycle brand, which the company has scrapped production of to focus entirely on the Indian line.

Indian currently offers a stable of 16 motorcycle models: the entry level Indian is the Scout Sixty, which starts at $8,999. followed by the Regular Scout and the new 2018 Indian Scout Bobber; next is the Indian Chief Series, with the Chief Dark Horse, the Regular Chief followed by the Chief Classic and Chief Vintage. The Indian Springfield offerings are next with the Indian Springfield Dark Horse and base Springfield. Four Chieftain models are offered: the base Chieftain, Chieftain Dark Horse, Chieftain Classic and Chieftain Limited. Finally are the heavy cruisers or “Bagger” brigade consisting of the Roadmaster Classic, the Regular Roadmaster and the flagship ride – the Indian Roadmaster Eliite, which comes with a base sticker of $36,999.

With so many to choose from, how does one go about making the best selection. The big question is…”What would Tonto ride?” The answer is obvious – “Get ‘em up Scout!” For those of you who are too young to know who the heck Tonto is, he was the masked Lone Ranger’s Indian sidekick. If you don’t know who the Lone Ranger is, I’m so sorry. In all seriousness, go for what visually strikes your fancy first and then determine if that choice meets your riding purposes and style, and falls within your budget range. 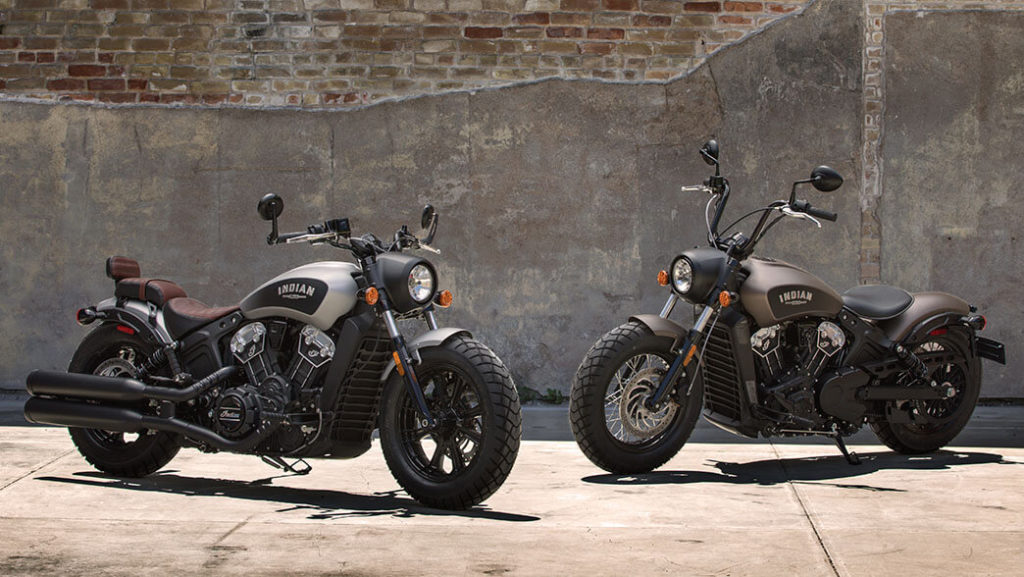 Visually, the Indian Scout Series displays a retro flavor, but with a more modern flair. The chassis is a reflection of what the original 1920 Scout would probably have evolved into over the years in order to match today’s standards. In the past, there were several models or trim levels of the Scout. Today, this latest iteration Scout offers three variations model – no more model 101s of different displacements, or Scout Sports or Scout Military and Military Juniors or even the Scout model 648 Daytona Sport. The last year of production for the original Scout was 1950, offering only the Indian Scout Sport/Super.

The 2018 Indian Scouts are all liquid-cooled rather than air-cooled, which makes for a highly visible non-conventional departure from its predecessors, while the suspension is basically conventional fore and aft.

The base Indian Scout and the new Indian Scout Bobber share the same powertrain, while the Scout Sixty is detuned and has one less gear. A two-up Indian Scout is available with optionally available accessories such as: a chrome driver backrest, chrome highway bars, passenger pegs, a passenger pillion, a quick release mid-height windshield, Tan saddlebags and a Tan tank pouch.

Motive force for the Scout Bobber comes from a 1123cc or 69 cubic inch, liquid-cooled Indian V-Twin with closed loop electronic fuel injection, a 60 mm bore and split dual right side exhaust with a crossover. Claimed horsepower is rated at 100, while the torque generated is 72.2 pound feet at 5,900 rpm. A six-speed sequential manual transmission gears the engine’s output to the rear wheel through a gear drive wet clutch Primary Drive to the final left-side belt drive.

My 2018 Indian Scout Bobber wore a flat matte Black finish on its bodywork, which featured hard edge lines on the fuel tank and front and rear fenders. The solo “old school” low seat was done in durable, weather-resistant Desert Tan leather. The base price was set at $12,499 with the final sticker coming to $12,849.  Including ABS brakes. Dealer handling and prep may vary. 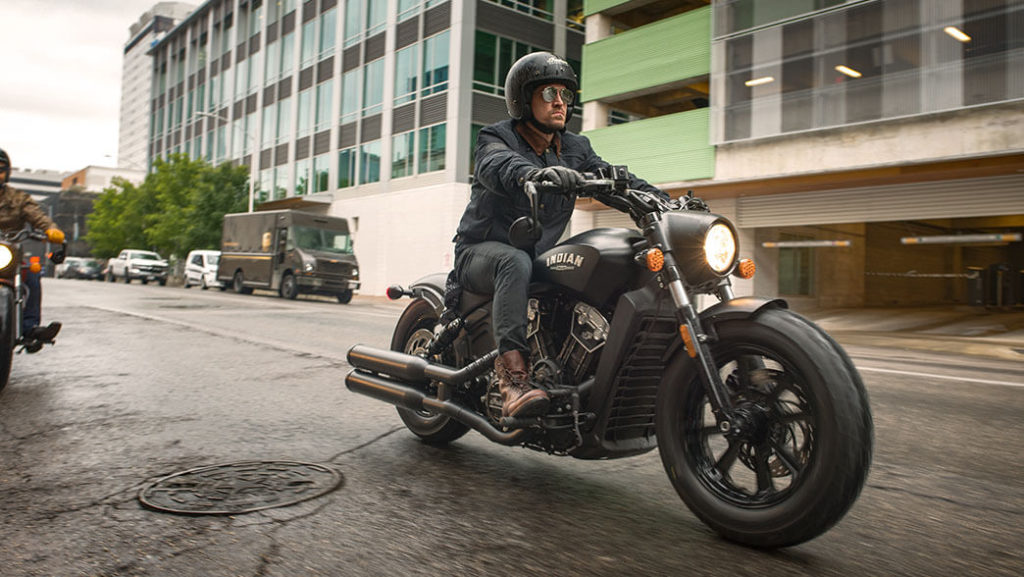 SUMMARY: The initial reaction to viewing the Indian Scout offerings is that they’re relatively small. They sit low and display a rather austere retro image. There are no faux cooling fins on the engine, but rather ribbing that is structural and matches other aluminum-toned accents.

Acceleration comes rapidly and torque is available on demand – a lot of it for a bike this size.

The new Scout Bobber comes as a solo bike, adding to its early heritage flavor. Foot controls are set forward and the handlebars are well positioned and reach back to the rider, all making for a basically comfortable riding position, unless you happen to be 6’4” or more, in which case, the foot pegs would benefit from being set further forward.  The seat though small is surprisingly comfortable with its 25.6-inch height. A windshield, passenger pillion and pegs, and saddlebags would spoil the Bad Boy (or girl) look.  Okay, granted, added comfort, convenience and functionality may trump appearance and may not be a bad thing. Optional chrome crash bars, for instance, would provide relief for tall riders on long rides, but would tend to elevate the “bling” level, which for my taste doesn’t fit this bike’s image

A seat that moves the rider back an inch or so, and foot control mounts that position feet forward more as well as handlebars that move the hands forward an inch are all issues that may be accomplished for taller riders without destroying the low-slung custom Bobber flavor.

The inverted mirrors take a little getting used to at first, but could easily be reversed for a more conventional approach. Turn signals are not self-cancelling, and there is no fork lock, so traveling with some kind of portable security is recommended for security. The Indian Scout Bobber is exceptionally well balanced with its low center of gravity, which allows for easy, fluid handling at all speeds, with enough lean angle to bolster confidence in high speed cornering, and the price is affordable and certainly as appealing as the bike’s appearance.

In the final analysis, the 2018 Indian Scout Bobber is a lot of really cool bike for the money, while adding some convenience touches is recommended for extended cruises, but as is, the Bobber is ideally suited for shorter rides and attracting attention.