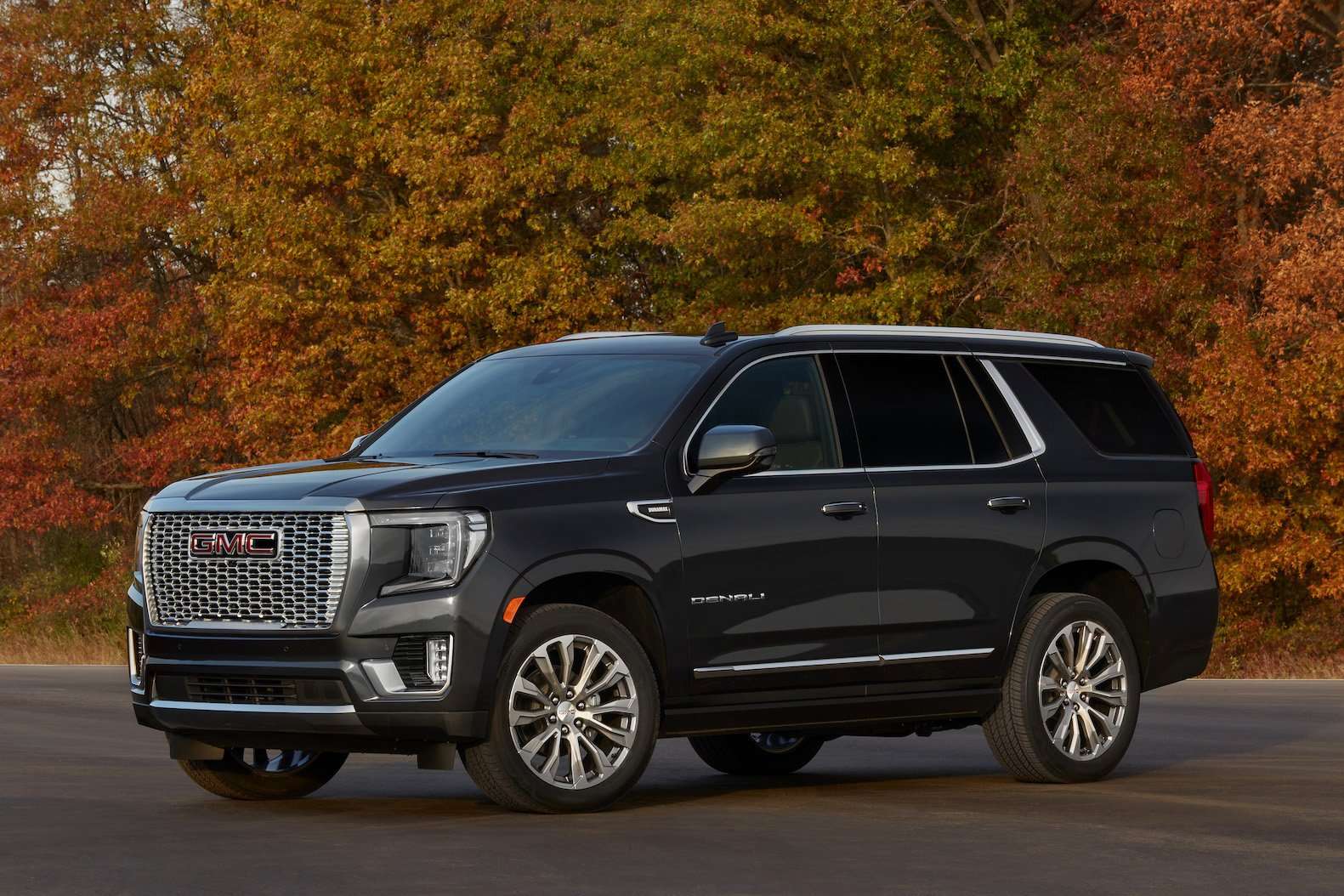 Recently Automotive Rhythms had the chance to evaluate both the newfangled 2021 GMC Yukon AT4 and the Yukon Denali, with both presenting a unique aspect of the formidable SUV’s characteristics. They are large outside, generous in size inside for extended families, and technologically savvy. Of course, the Denali represents the luxurious end of the pendulum, while the AT4 switches modes for a more adventurous persona and slated for active off-roading owners. Now we can share another variant with interested consumers in the form of the Duramax 3-liter turbo-diesel inline-6 powered Yukon 2WD presented in a Hunter Metallic exterior hue.

In the prior two models, I pushed the power of their 6.2-liter ECOTEC3 V8 with 420-horsepower, so there was never a problem loading up the cabin and accelerating at will. This engine is paired with GM’s 10-speed automatic transmission with gear tabs for shifting. However, the turbo-diesel can achieve an extensive highway range of 648 miles in the 2WD version, while the GMC Yukon XL 2WD has an available maximum highway range of up to 756 miles. I assume that the XL can be ordered with a bigger fuel tank. My vehicle’s specific fuel economy is 21 city / 27 highway / 23 combined mpg and can tow 8,100 pounds (1,671 payload). Yet, I didn’t feel the downsize since power and performance still met my expectations. The Duramax, also paired with a 10-speed automatic, puts out 277-horsepower and 460 lb-ft of torque at 1,500 rpm. And it’s pretty quiet!

With this type of range, owners can use the Yukon for longer drives instead of switching to a smaller household vehicle. Now we can hit New York from DC roundtrip without having to stop to refuel. Amazing! I became enamored with ride smoothness thanks to an all-new Independent Rear Suspension, Magnetic Ride Control, and a four-corner Air Ride Adaptive Suspension as part of the $10,410 Denali Ultimate Package. This option also adds a dual-pane panoramic sunroof, 22″ aluminum rims, power-retractable running boards, Adaptive Cruise Control, Enhanced Automatic Emergency Braking, and several other highlights. GMC threw in the $2,490 Rear Seat Media System with dual 12.6″ entertainment screens. But these TVs seem to take up space, yet they didn’t capture my teens’ attention since their phones are all they require on the road. Other vehicle touches are the impressive LED headlights, opening tailgate window, a prominent tailgate spoiler, and quad exhausts tips. 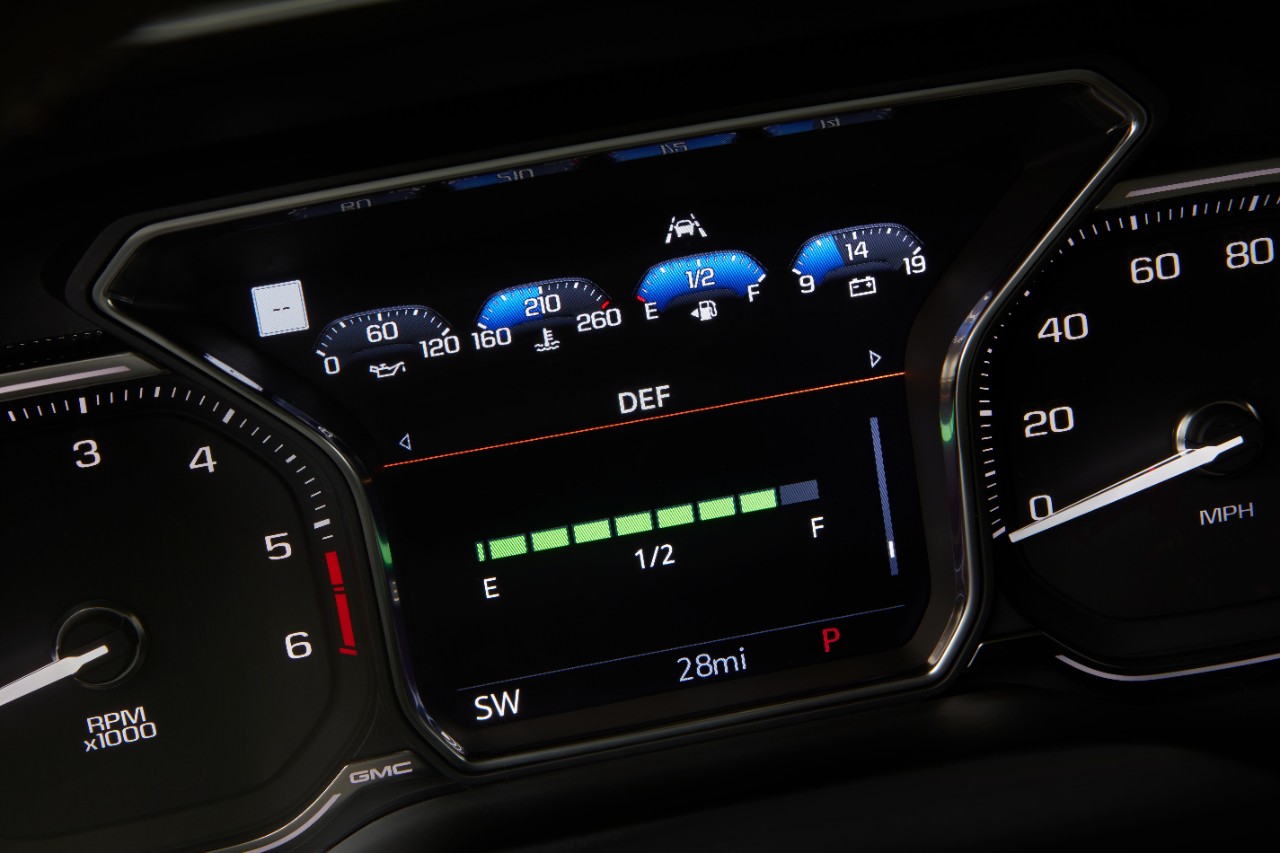 Inside the opulent cabin, a 15” Head-Up Display animates the Yukon’s speed, navigation, and distance between the vehicle ahead and nine camera views increase your situational awareness. The second-row and third-row seats can be conveniently laid flat and lifted by switches on the overhead console and the rear cargo area. Moreover, a 14-speaker Bose Centerpoint Surround augments your tunes. The high-performance system features AudioPilot 2 Noise Cancelation Compensation Technology, Centerpoint 2 Signal Processing, speakers located within the A and D pillars, and a Richbass woofer custom-engineered in a cargo area enclosure.

The 2021 GMC Yukon 2WD Denali Duramax Diesel inline-6 is efficient, refreshing, and refined to the core. It’s massive and could be a nuisance at times when parking in crowded lots, but all other attributes quickly overshadow that one inconvenience. However, you have to pay to play since MSRP starts at $68,195 and $78,450 for my total, including the $1,295 destination charge. Set aside another $3,000 for 4WD.

Yukon has always been a top selection for urban dwellers, families, and individuals that typically roll with crews or sports teams. You would be hard-pressed to find someone in your association that didn’t own a Yukon or its Tahoe counterpart.  With the 2021s, expect that premise to expand.

A Preview of the 2022 Range Rover: New Levels of Emotional Engagement

GMC Introduces Its Most Luxurious, Advanced and Capable Sierra 1500 Lineup