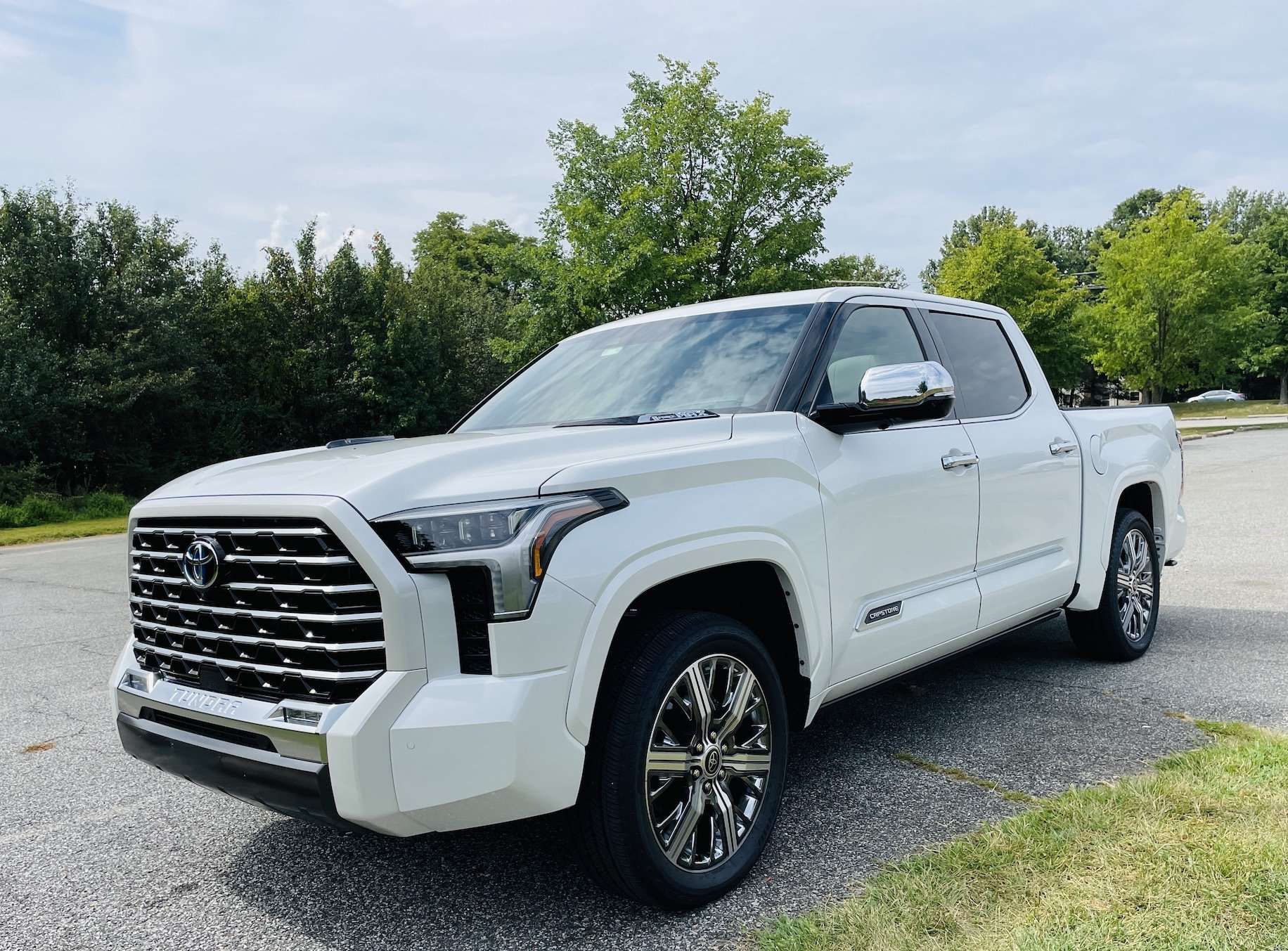 Pickups are big business representing high returns and stakes for the auto brands that build them. They are also a daily necessity for both consumer and commercial usage. This week Automotive Rhythms spent more time behind the wheel of a 2022 Wind Chill Pearl Toyota Tundra Hybrid Capstone CrewMax, which felt more luxurious than industrial. I didn’t want to accomplish my typical yard tasks and Home Depot runs with this particular truck, especially with its lovely black and cream two-toned interior, jeweled chromed exterior trim, and 22″ dark chrome alloy rims.   However, we did go mountain biking together. For rough riders, you might want to go with the Tundra TRD Pro, which easily handles all terrains on and off-road. The MSRP for the Tundra Hybrid Capstone CrewMax is $73,530, but my test model was a bit more due to the $1,045 AVS+ Load-Leveling Rear Air Suspension, $425 Wind Chill Pearl (white) paint selection, and the $579 non-skid spray-on bed liner. 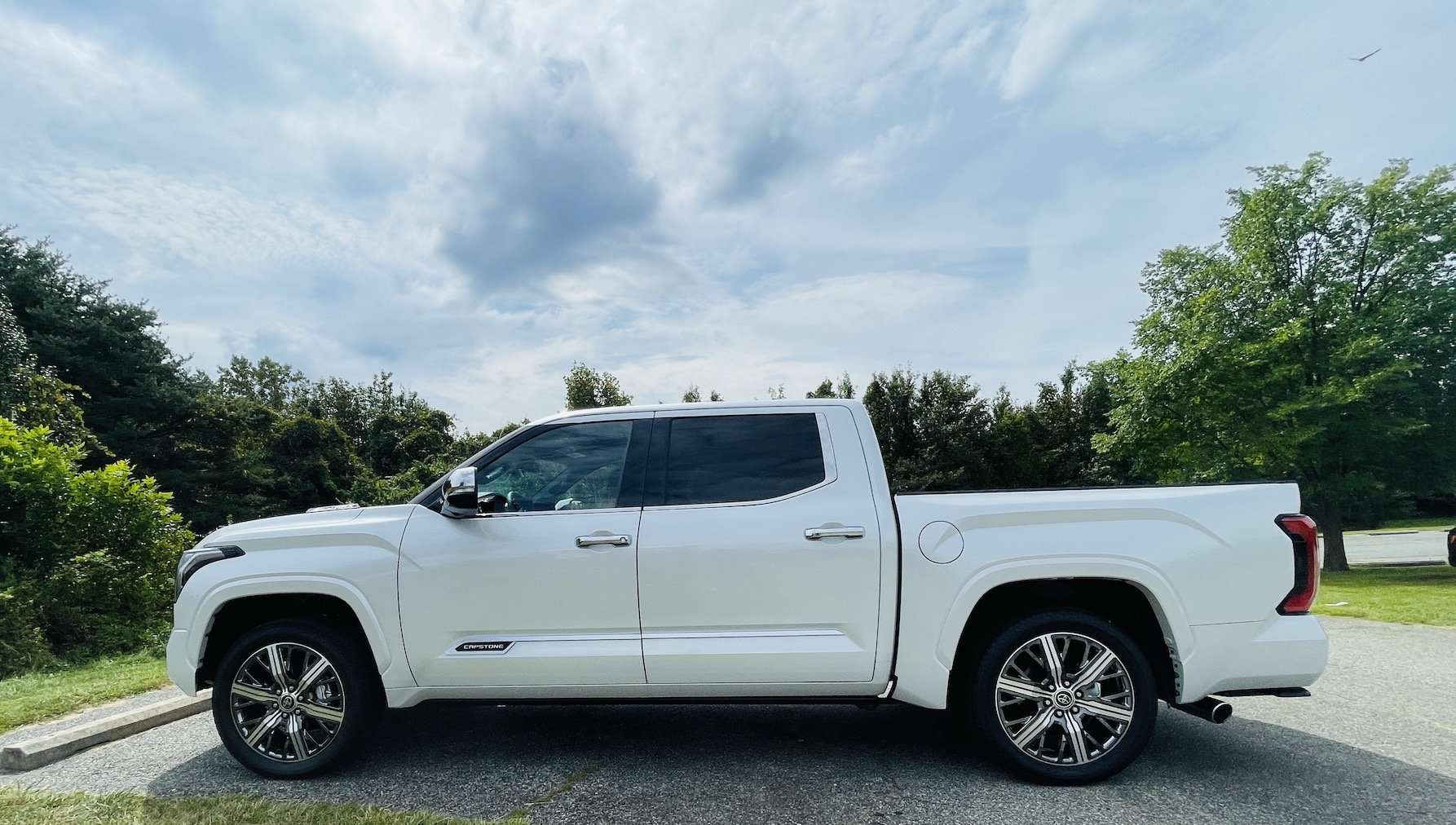 When the Japanese automakers (Toyota and Nissan) entered the contest, hardcore enthusiasts and traditionalists were slightly skeptical. But Tundra managed to chisel into that mountain of truck customers and create a loyal following. I’m not sure what happened to Nissan’s Titan, but there has been no buzz there. With the current third generation, Toyota re-engineered the Tundra full-size pickup with competitive features that we have come to expect symptomatically from the Americans. Unfortunately though, they still missed the target on a few essentials. For example, the truck lacks front tow hooks because engineers said the company was aiming for aerodynamics. In a truck? The plastic gear shifter is flimsy, as are the control tabs under the large touchscreen. The shifter jiggled every time I shifted! 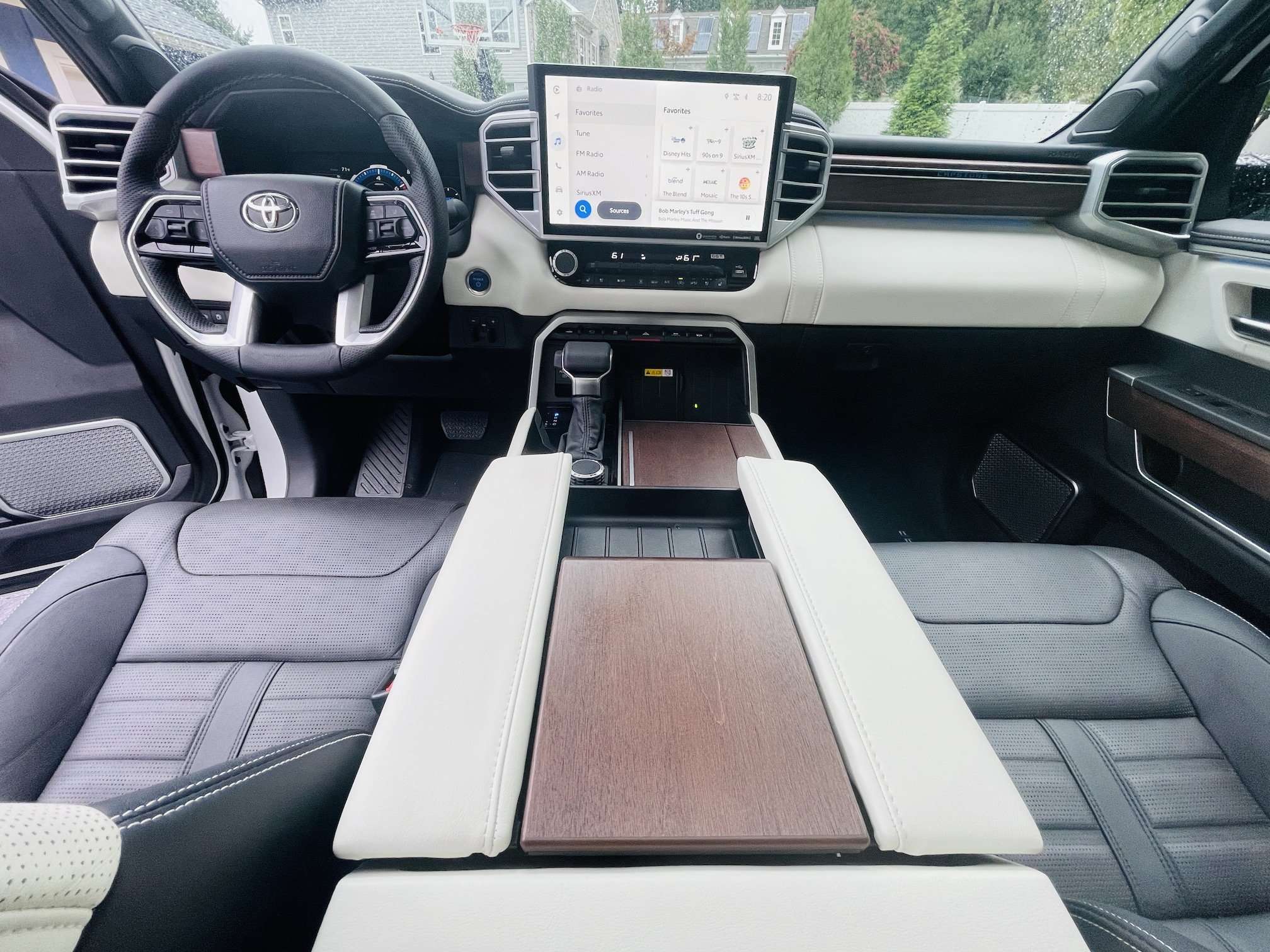 The Tundra was the first Toyota to introduce its proprietary Audio Multimedia System built in-house by their Texas-based Connected Technologies team. Initially, when we first drove the Tundra before market release last year, I was impressed by the Human Machine Interface’s voice commands, available 14″ horizontal touchscreen, Wi-Fi connectivity for ten devices, and processing power that is five times greater than the prior generation. Yet, after a week, I determined it requires more work since the graphics are cartoonish and the interface is not as seamless as other infotainment systems. Also, there is a large volume dial but no matching dial for channel seek.

A few notable features include the wide panoramic sunroof, power running boards and tailgate step, chrome or chrome-looking mirror caps, door handles, rims, grille, door strips, and emblems, a black A-pillar, and a two-piece assisted tailgate that now opens with the key fob or the embedded button within the taillamps. Additionally, the truck is offered in two four-door options: Double Cab with a 6.5-foot or an 8.1-foot bed and CrewMax with either a 5.5-foot or a 6.5-foot bed. 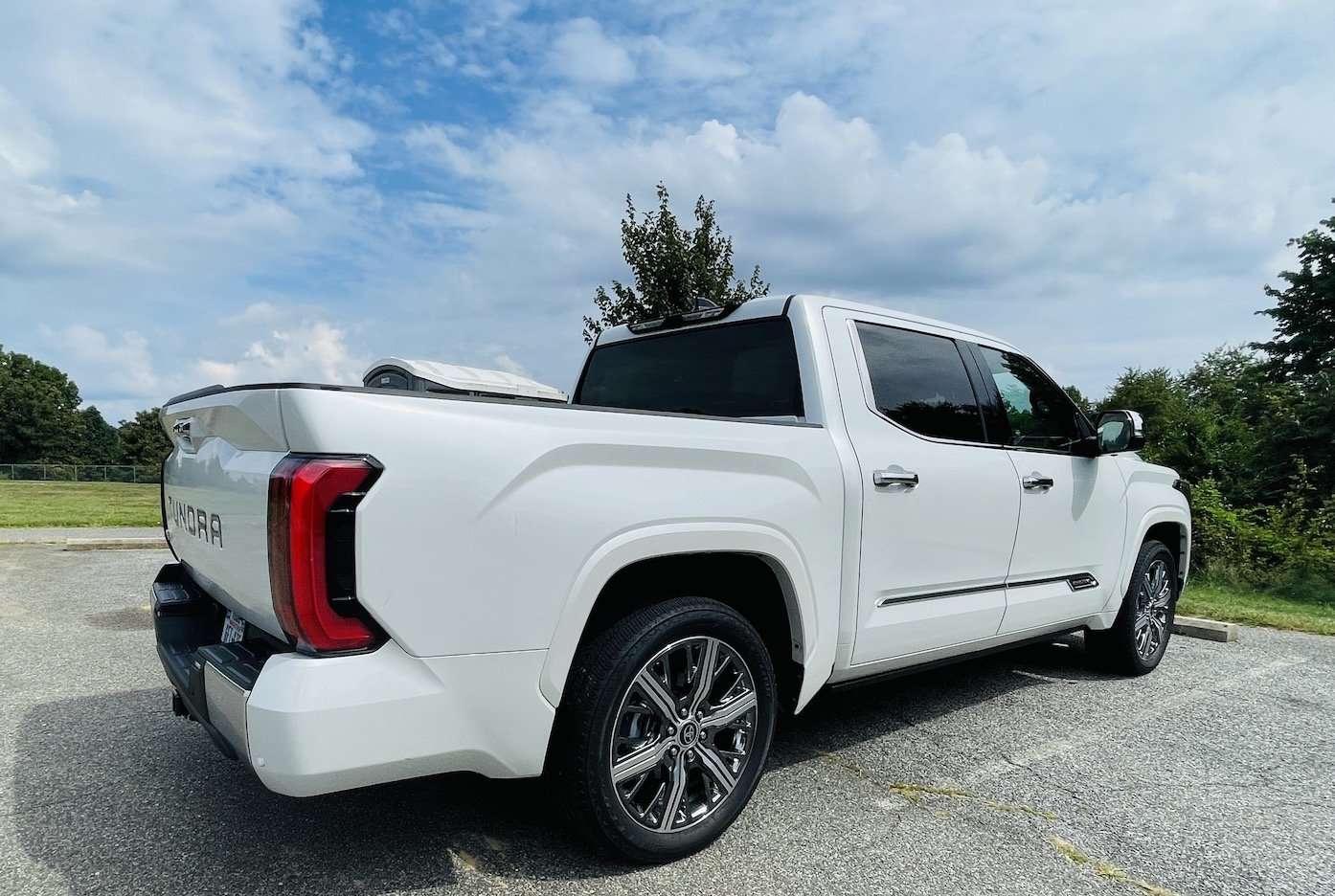 Toyota’s powerful i-FORCE MAX 3.5-liter twin-turbo V6 hybrid delivers 437-horsepower at 5,200 rpm and 583 lb.-ft. of torque at 2,400 rpm. It pairs with a new 10-speed electronically controlled automatic transmission with intelligence (ECTi) that finally replaces the previously archaic and sluggish 6-speed A/T which made the Tundra feel rough and raw. The 10-speed features Uphill/Downhill Shift Logic and Sequential Shift mode. The i-FORCE MAX is standard on the TRD. Then you have Drive Mode Select (DMS) to alter the Tundra’s characteristics into Eco, Normal, or Sport mode, and TOW/HAUL driving modes. However, keep in mind that the hybrid powertrain impedes the rear under-seat storage since the 288V Nickel-Metal Hydride battery occupies that space. Nevertheless, the i-FORCE moved the Tundra on the highway effortlessly as power shifted through the 10-speed fluidly.

Is this the luxury truck for you? Possibly. But compare thoroughly with the F-150, RAM, Sierra, and Silverado. 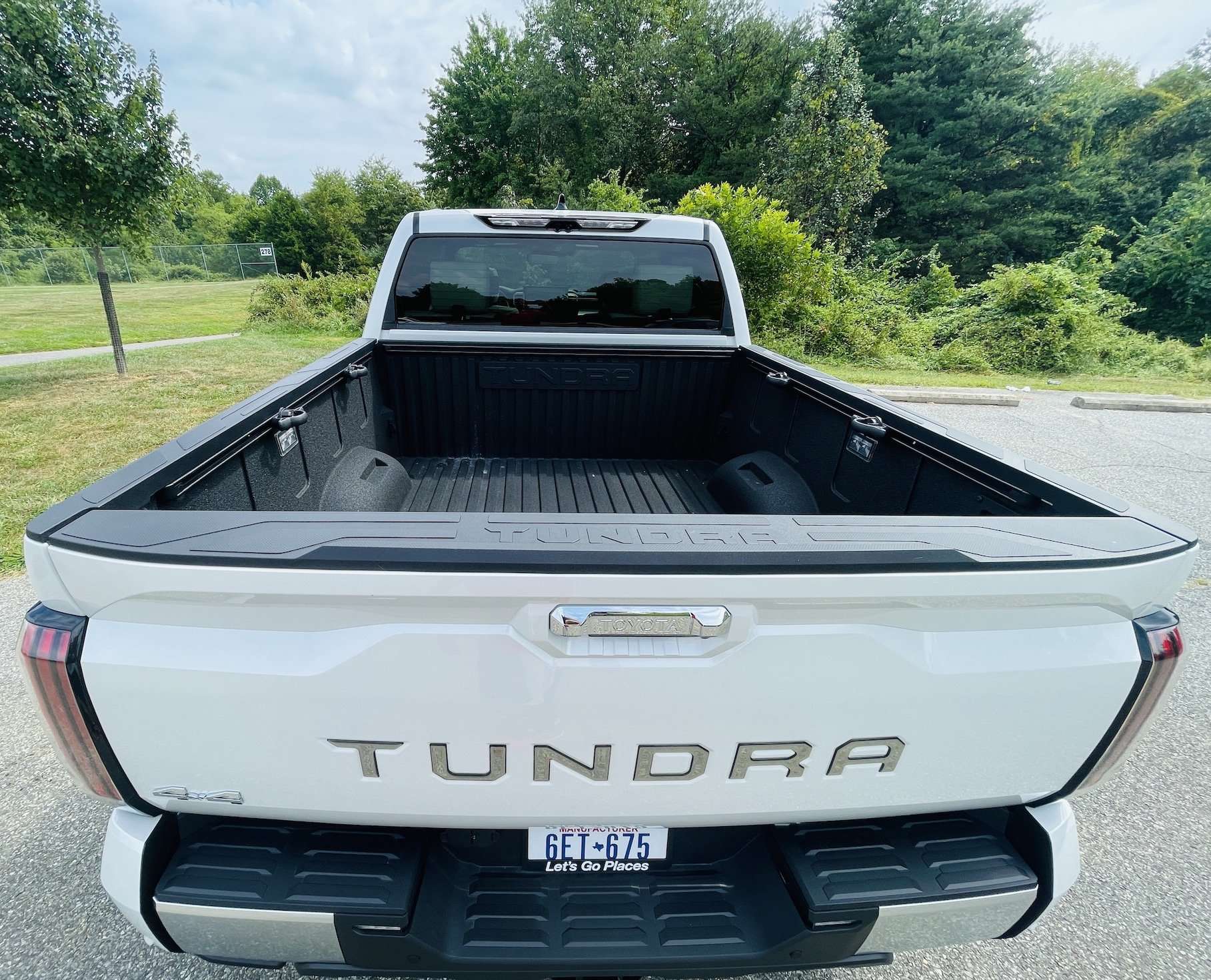