If you suddenly have the desire to embrace the romance of the open road via two-wheeled transport, but lack the confidence and ability we’ve got a bike for you. It’s the 2012 Honda Rebel CMX250C, which seems to have been around forever. It’s a very attractive compact street bike that displays a somewhat retro flavor and performs smoothly and reliably. The CMX250C is an ideal beginner bike or a most sensible ride for a person of smaller stature. The Rebel is one of Honda’s riding jewels. If you can ride a bicycle, you can ride the Honda Rebel with minimal coaching.

Soichiro Honda was a racer, businessman and manufacturer; but first and foremost he was a dreamer. In 1948, with $3,200 and a dream at age 41, Mr. Honda teamed with financial guru Takeo Fujisawa to start the Honda Motor Company. Together in 1949 they built an empire its first production motorcycle dubbed the D-Type Dream. In 1959 the American Honda Motor Company was formed in California, and in 1979, Honda of America Manufacturing was established. 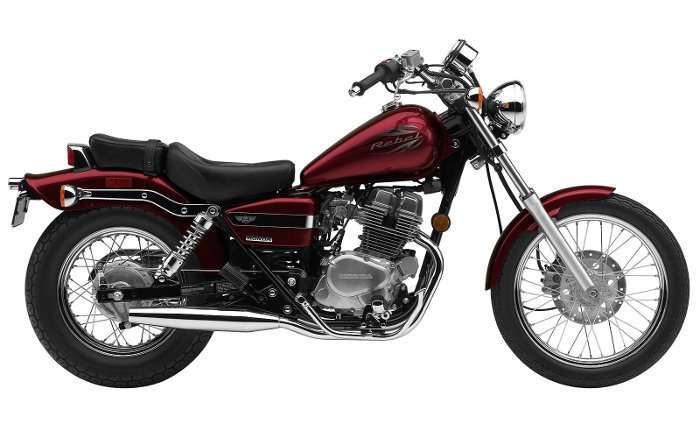 I’m not sure exactly when the first Rebel appeared on the scene as part of Honda’s motorcycle inventory, but good things that work well and serve a definitive purpose tend to last. Let’s look at what the 2012 Rebel has to off. First off, it’s just the right size for someone with a shorter inseam, and it’s manageable in terms of weight since it tips the scale at 331 pounds dry. The seat height is a low 26.6 inches. The bike also delivers just the right amount of power for a novice perfecting their riding skills.

Power comes from a 234 cc SOHC, 4-valve air-cooled parallel twin-cylinder with a simple 26 mm diaphragm-type CV Carburetor. Exhaust exits via chrome dual side pipes. Honda traditionally does not publish horsepower or torque output figures, but the power curve of the bike serves up sufficient power for a fun ride, and without overwhelming the” newbie” rider. Another plus is that the fuel economy is awesome at 84 mpg, which means fewer stops at the gas pump and big savings. In terms of styling, the Rebel represents your basic standard-type motorcycle. It serves up a comfortable upright riding position with mid-placed foot controls and handlebars that are positioned favorably for longer jaunts.

The rebel rolls on Bridgestone rubber mounted on chrome lace spoke wheels. The suspension consists of inverted front 35 mm forks with 4.6” of travel, and dual shocks in the rear with a 5-position preload adjustability and 2.9” of travel. Bringing the Rebel to a halt is a single disc in the front with a twin-piston caliper and a rear drum.

Visually, the Rebel borders on old school styling with a teardrop tank; small cycle fender up front; and a bobbed-style rear fender. There is a nicely padded saddle for the rider and a modest passenger pillion with a hand strap. Foot pegs are provided for both. Instrumentation includes lights for Neutral, High Beams and directional signals, which are not self-canceling. The Rebel is available in two paint schemes: Matte Silver or Candy Red metallic. The base price amounts to $4,190 with an estimated total tag of $4,340. After dealer prep and handling. My test bike was finished in the Candy Red metallic.

Acceleration response is quite good, and the riding position will prove to be more comfortable for more vertically challenged riders, while my long legs “longed” for controls a little further forward. Short rides were okay, but longer rides required stretching occasionally. The speedometer is mounted above the headlight in an attractive retro chrome housing, along with other instrument lights and informational readouts. The large, integrated taillight provides a custom look and is highly visible. The Rebel is well balanced and handles easily, with a nimble response to rider input, due in part to the larger 18” front wheel.

Bottom-line, the Honda Rebel CMX250C makes for a satisfying and entry-level bike at an affordable and attractive price with low maintenance and fuel costs. The Rebel is a bike that’s right for these economic times. Yet, it’s a little small for me, and I would certainly raise the handlebar angle to clear my knees in tight turn maneuvers if it were mine. The Rebel is also quite popular for training purposes with the Motorcycle Safety Federation because of its ideal size and handling characteristics. It’s definitely a Rebel with a cause.