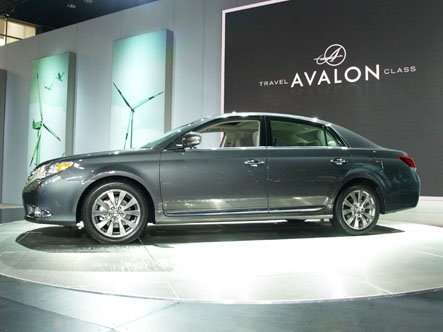 As Toyota Brand VP, Bob Carter presented the all new Toyota Avalon to members of the automotive press at the Chicago Auto Show, said “…With everything going on, we considered postponing today’s media introduction.” But he added, “New products will help reinforce our continued commitment to customers.”

With that, the all new Avalon made its debut. Several changes have been made since it last incarnation — a wider front grille and new sleek taillights in back with LED light pipes. Inside, there are larger headrests and a rear reclining seat.

A rear camera image is displayed in a small square on the rearview mirror to aid in backing up which is a first for Toyota. The tech list also includes Bluetooth hands-free phone and music streaming, XM radio, a USB and 1/8-inch auxiliary connector and a touch-screen navigation system.

The Avalon’s powertrain remains the same with a 3.5-liter, 268-hp V6 and six-speed automatic transmission, but the gas mileage shows improvement from the past year with EPA-estimated 20 mpg in the city, 29 highway rating.

The 2011 Avalon goes on sale this April and although pricing was not yet announced, Toyota says it will be about the same as the outgoing model. But Carter’s closing comments were more focused on the overall impression of the Toyota brand. “Make no mistake … nothing is more important at this moment to Toyota than restoring the trust and confidence of our customers and meeting their needs … whatever they may be.”