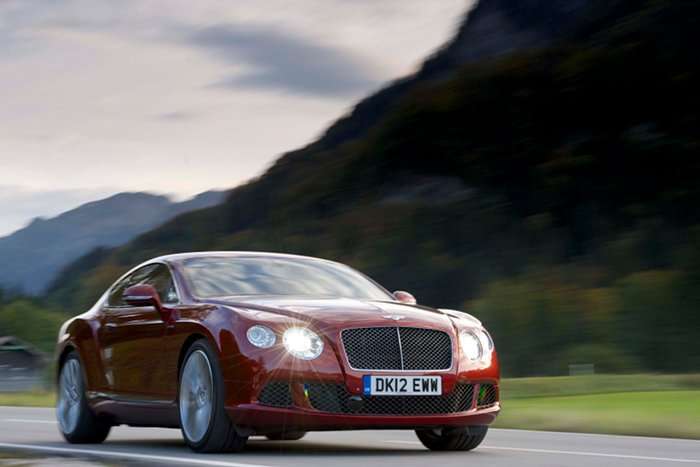 Welcome to the famed Autobahn, an intricate system of motorways connecting various German regions and cities. First conceived in the late 1920s, the widely known Autobahn was completed during the Nazi era and is the fourth largest highway network in the world. Despite beliefs that you can go flat out on the Autobahn, the system has many speed limits and only an eighth of its total length remains limitless in terms of speed. The “Rainmaster” Rudolf Caracciola, a German driver that won a historic six German Grand Prix titles, left his indelible mark upon the Autobahn and set one of the highest speeds ever achieved on a public road at 268 mph.  Yet, only a few vehicles have the power, stability, braking capacity, and the efficiency to accelerate up to 205 mph in a short cycle of time and decrease speed profusely before hitting impending traffic. For the rest it’s an untenable position.
[hana-flv-player
video=”http://video.automotiverhythms.com/0_2012/2013_Bentley_Continental_GT_Speed.flv”
width=”640″
height=”480″
clicktarget=”_blank”
player=”5″
autoplay=”true”
autorewind=”true”
skin=”mejs-wmp”
/]
Bentley, a hallmark in both the luxury and performance categories of the automotive world continues to impress pundits in their respective field of play. With the commencement of noteworthy news and consummate conceptions such as the curve hungry Continental-based GT3 racecar currently being developed by a dedicated motorsport team at the company’s headquarters in Crewe, United Kingdom, Bentley is on top of their game. The GT3 will unnerve many competitive motorsport teams since Bentley’s storied racing history and penchant for unsurpassed race technologies runs as long as the Amazon River. And if that isn’t enough news for one day, the British automaker has also unleashed the 2013 Continental GT Speed which now becomes their fastest production vehicle ever. Why, it only has a top speed of 205 mph (up from 198 mph on the prior generation)! Today’s GT Speed receives its ancestral lineage from company founder W.O. Bentley’s vision of a substantial performer in the form of the 3-litre ‘Speed Model’ which arrived on the scene around 1923.

And if you missed the news, Bentley sales are up 25% globally thanks to the Continental GT which stirred a movement in the luxury coupe segment when it hit roadways ten years ago. Roughly 85% of customers who purchased this vehicle were new recruits to the company. In fact, this movement is spearheaded by 26,000 proud owners of 12-cylinder powered GT’s. It’s a foregone conclusion that this new Continental GT Speed will not only continue, but increase the mass appeal for bespoke Bentley automobiles.
I was on hand in Munich, Germany and its surrounding regions to witness and experience the unimaginable acceleration and the handcrafted accoutrements of the Speed. Upon arriving from Washington, D.C., a welcome party of multi-hued Speeds from Apple Green and Rubino Red to Continental Yellow and Burnt Orange adorned the airport pavilion for thousands of on-the-go passengers to daydream upon. Some of these polarizing colors are Lamborghini favored to say the least and left many gazing in wonderment at the sheer fact of an Apple Green Bentley. In my opinion, congenial to the eye tints such as Dark Sapphire, Onyx and Hallmark are traditionally and comfortably suited for the GT Speed. The stately power and sophistication of the Bentley W12 6.0 liter engine is what it’s really all about as my drive partner Brian Armstead and I would soon discover in route to the Bavarian Alps by way of the Autobahn to nestle into our final destination at the InterContinental Berchtesgaden Resort.

Brian drove first and immediately challenged the Speeds’ capabilities. Before I even become acquainted with the seductive passenger compartment all I heard was whoa! as he mashed the drilled alloy sport pedal and accelerated immediately on the Autobahn. But let me pause and add in a handful of pertinent details. The twin turbo W12 engine is very pivotal to relations between the vehicle’s core system operations. Bentley has increased all of the engine’s power numbers while reducing CO2 emissions by 15% and realizing 13 city mpg and 20 highway mpg. At 6000 rpm, 616 horsepower are at your disposal while 590 pound-feet of torque (between 2000 rpm to 5000 rpm) propels the large rear-biased AWD 2-door (40 front/60 rear torque split) from 0 mph to 60 mph in just four seconds. Note that 500 pound-feet of that torque is available at just 1000 rpm. A new and intuitive close-ratio 8-speed ZF automatic transmission provides quick shifts from either Normal or Sport modes. Of course, Sport transforms the vehicle into a performance happy beast while Normal allows the driver to enjoy the luxury of the vehicle. Special shift technology dubbed “Block Shifting” allows you to drop multiple gears at once for max acceleration. More specifically, the transmission will decide what gear to select based on engine and road speed when the driver is in paddle shift mode. For example, it can drop from 8th to 3rd gear uncompromised. The Bentley paddle shifters are very large and attached to the steering column. For some it works but for me I like smaller shifters on the actual wheel so I have full grip when changing gears opposed to springing my outstretched fingers to up or downshift. Back to Brian as he discovers that acceleration is relentless while the Speed is reaching copious amounts of speed as if we’re at Le Mans: 140 mph, 150 mph, 160 mph and then he stopped counting to pay attention to traffic. Amazing as I felt right at home in my living room! This amazing performance is due partly to the .5% reduction in drag and 8% increase in downforce from the rear spoiler that deploys at 90 mph and offers 275 pounds of downforce to balance the GT Speed at top velocity. Additionally, everything mechanical has been stiffened, ride height was lowered 10 mm, and new 9.5” wide 21” 10-spoke rims (15% lighter) are enveloped in 275/35 ZR21 Pirelli P Zero tires for high-speed stability. Standard cast iron or optional cross-drilled Carbon Ceramic discs with 8-piston front and 4-piston rear calipers (the largest passenger production brakes in the world) are outfitted for this vehicle. We would soon find out how impressive the Ceramics (Bentley expects them to last the life of the car) were after having to brake abruptly when we spotted the Polizei, or better yet when they spotted us. A German remuneration of 160 Euros was the penalty! 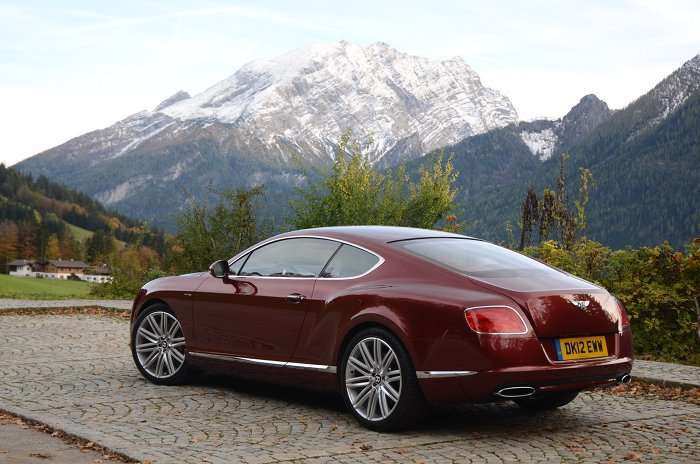 All the while I’m relaxing in the palace themed cabin with perforated diamond quilted leather chariot seats that are tan and red in nature to match the exterior Rubino Red we were driving. Actually 17 various exterior finishes are presented with an unlimited palette available from mild to wild. An enhanced multi-media system features an 8″ touchscreen entertainment system with Google 3D mapping that offers guidance from zip codes and the ability to set your own points of interest such as all of my favorite vegan restaurants so I never go without energy. I connected my iPhone and pumped Reggae through the highly specialized 11-speaker Naim audio system ($7,155) and continued playing with the Nav system which also has a 15-gig hard drive. The tech savvy center stack is embedded deep within the red leather dash. Its thick gear selector is wrapped partially in red leather and topped off with Bentley’s traditional knurling metal top cap, while the hand-stitched seats are embossed with the company’s “Winged B” insignia. Specific traces of dark stained Burr Walnut veneers complete the customary expectations for Bentley owners. Dark tint aluminum or carbon fiber is another choice for cabin materials. A sunroof would fare well in this vehicle but is not currently available.

The passenger experience was perfect in every respect, but it was soon time for me to take the wheel. When switching positions and moving to the driver side the heavy doors give you an indication of the vehicle’s overall weight and feel. The engine tone is locomotive and the Speed’s exhaust tunes rumbled magically from the wide dual oval outlets. I wasted no time and set sail full steam ahead to replicate Brian’s experience. It had been quite some time since I was last on the Autobahn, but the Continental GT Speed was exceptional. Yes, I did feel the massiveness of the GT which is one of the largest coupes on the market alongside the Mercedes-Benz SL. At times it was scary pushing all that weight around on public roads, yet the $13,600 Carbon Ceramic braking system with black brake calipers eased my tension.
We reached our destination 3,281 feet above sea level on Eckerbichl. The environs were as natural as the timber in the Bentley as the Alps circumvented the region from every angle. In view, Mount Watzmann stood proudly. Just a few miles away was Lake Königssee, the historic Dokumentation Obersalzberg and Salzburg. Already I was in a meditative state of mind, looking forward to more of the same with the following day’s drive.
Keep in mind the Speed is not a limited edition Bentley. It’s a true model and represents almost 50% of all Continental sales. On sale this month, expect a price tag of $215,000. Our vehicle was itemized with premium additions that brought the total price tag to $248,820.