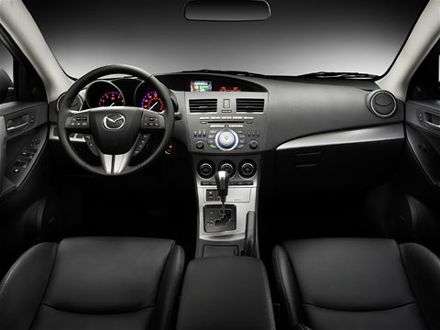 It’s easy to see why the 2010 Mazda3 was a finalist in the recent Internet Car and Truck of the year contest. The compact sedan was stylish, easy to drive, comfortable fore and aft and it was fairly fuel efficient.

For 2010, designers gave the Mazda3 a new grille execution, new front and rear lamp treatments, and deep creases in the front fender design. All that translated into a car that looked like it was moving while parked. That’s what you need in automotive design to have a sporty image.

And Mazda with its Zoom Zoom advertising tag line keeps refining and enhancing that brand image with each new generation of its product line. In fact, the Mazda3 has a dominant grille that uses design cues from the Mazda6 and RX8 and that’s not a bad thing.

Still, today’s automobiles, except for the truly exotic, are more than looks. In a phrase, in today’s world it’s about value for the dollar. And I think the Mazda3 delivered.

First of all, the driving attributes of the Mazda3 were exemplary. Though it was a compact design, my test car rode like a midsize car. It smoothed out the rough and tumble city streets here. The car was not overwhelmed by the size of other vehicles.

The wheel base and track width remains the same but the overall length of the Mazda3 has been increased by three-inches. That lengthened has improved drag coefficient and it has increase fuel capacity. But I think it also improved the cars ride.

I had the 2.5 liter four-cylinder model with a six speed manual transmission. I would have preferred an automatic gearbox but the manual did not disappoint. Shifts were easy, cross gates were literally unnoticeable and acceleration wasn’t bad. The Mazda3 with the 2.5-liter engine and a manual transmission has an EPA rating of h a 2.5-liter engine gets 21 mpg in city driving and 29 on the HWY. The five-speed automatic loses one mile per gallon in the city.

Although taller front seat passengers would probably have to slide forward a bit, I found a fair amount of room in the back seats. Leg room would be a snug fit but there was plenty of head room. I think two normal sized adults could ride in the Mazda3 back seats for a good amount of time and not be uncomfortable.

Mazda says, “The new MAZDA3’s cockpit is configured to support the driver in a more dedicated manner than any sport-compact competitor.  Two large instrument clusters are carefully positioned and clearly marked to deliver engine and road speed information.  Key controls are located in the steering wheel spokes where they can be reached with minimum distraction.

A new Multi-Information Display screen containing navigation, audio, and trip information is positioned high on the instrument panel to avoid the need for the driver to refocus vision off the road ahead.  A second screen slightly to the right provides station frequency and climate control setting information.”

In some instances, creature comforts were surprising. There was a navigation system, satellite radio, a CD changer with MP3 capability and heated front seats with five settings. There was also Bluetooth, a moonroof, a tilt-telescoping steering wheel, rain sensing wipers, Xenon headlights, and on it went. But I was particularly pleased and surprised by two features.

My test vehicle had adaptable headlights a feature that I normally find on upper end luxury sedans. It also had push button start and stop which is making its way into lower priced product lines. But the vehicle also had push button open and lock doors. Just push the button on the driver’s door and I could lock or unlock that door. For my money, that wasn’t bad.

Frank S. Washington is managing partner/editor of AboutThatCar.com and
AboutThatCarBlog.com.