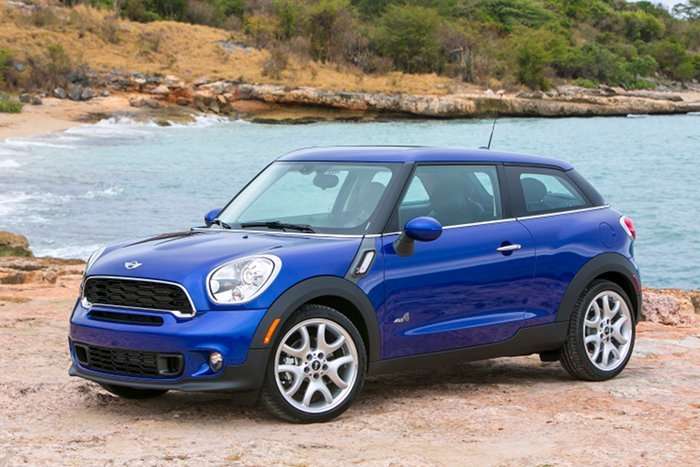 Ponce, Puerto Rico – MINI will bolster an already diverse lineup of vehicle offerings by adding four variants of the their new 2013 MINI Paceman which is based on the MINI Countryman platform. Displaying the familiar face of MINI, the Paceman is also the only model that showcases the actual model name on the vehicle, with “Paceman” appearing prominently on the rear gate.

In essence, the Paceman adds a sporty flair to a functional design with its sloped aerodynamic roof actually creates a coupe-like effect and resembles the form of Range Rover’s Evoque, wider rear quarter, and sport suspension componentry as standard fare. The Cooper S ALL4 model brings 4WD to the equation. The Paceman brings the MINI stable to a total of seven variants including a MINI Hardtop, MINI Coupe, MINI Convertible, MINI Roadster, MINI Clubman, MINI Countryman and the MINI Paceman.

All versions of the Paceman draw their motive force from a 1.6-liter, inline 4-cylinder with Valvetronic fuel injection. Cooper models are naturally aspirated and produce 121 horsepower at 5,500 rpm along with 114 pound feet of torque at 4,250 rpm. Cooper S renditions receive an intercooled, turbocharger along with Direct Injection, while delivering 181 horses at 5,500 rpm and 177 pound feet of torque.

Our evaluative experience consisted of a challenging two-hour plus drive over narrow, twisting roads filled with chickens, stray dogs and large trucks. Puerto Ricans tend to own the road and prefer not to be challenged. The ride took us to the Hacienda Pomarrosa Coffee Plantation for a workshop on the Paceman models and lunch featuring authentic Puerto Rican cuisine.

My first driving partner and I started the first leg of the program by taking turns piloting a MINI Paceman Cooper S with a six-speed automatic transmission that sported a Brilliant Copper exterior with a Black top and Gray interior. My second driving partner and I drove to the airport in an ALL4 Cooper S Paceman with a solid Starlight Blue metallic exterior and Black interior. Pricing for the Cooper S Paceman starts at $27,500 with the ALL4 model at $29,200.

For those who shun the concept of a four door vehicle and think of them as being less cool than two-door rides, the Paceman’s form will fill the bill for MINI fans. It’s totally functional with an interior as accommodating as the Countryman. Okay, getting into the second row seats is not as easy and convenient as with four doors, but it delivers a Coupe persona, unlike the MINI Countryman.

The Paceman loses none of the “go-cart” fun and pleasure offered by other MINI models. Acceleration is exhilarating, handling characteristics are spot on, with excellent response from steering input. The ride quality is MINI firm – not a bad thing for devout driving enthusiasts, but perhaps a little on the harsh side for “pansies.”

MINIs are not normal according to some, but they all display a certain “Design with Bite.” Not enough models from which to choose for your taste? Another is on the way in the form of a Club Van, which will be the first rear-wheel drive MINI. Both the Cooper S and ALL4 Cooper S Pacemen were totally enjoyable to flit around Puerto Rico.

The local Puerto Rican MINI club showed up in force for the program and extended their approval of the new Paceman, which conveys their good taste.