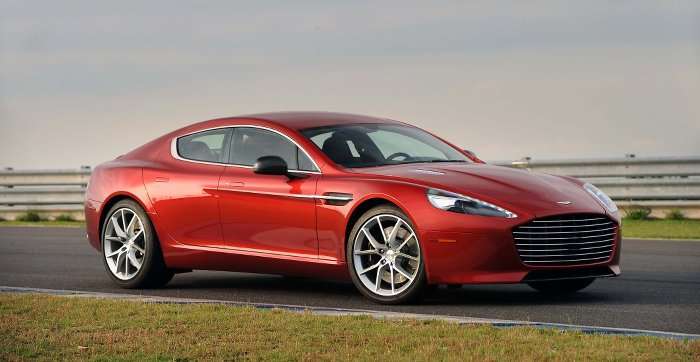 “S” stands for “Superlative” in respect to Aston Martin’s latest – a majestic touring sedan and a beastly performer on the track. Specifically, it was an exhilarating day at Atlanta Motorsports Park with the 2014 Rapide S and its arsenal of technological innovations. On sale now, the $199,950 ($2,825 Destination) four-door sports sedan shaves .3 seconds off its 0-62 mph time to 4.9 seconds and increases top speed to 190 mph with the naturally-aspirated, hand-built 6-liter V12 engine.

The 4,387 pound Rapide went into production in 2010 as an object of affection and transformative vehicle to expand the British automaker’s product portfolio. Of course it would also allow Aston Martin to compete in a segment that is increasingly becoming more popular as luxury connoisseurs demand faster cars in bigger packages. It now represents 25% of the company’s sales and should continue to see growth with attributes that appease the duality of an individual looking for overstated luxury and Le Mans-like driving capabilities. The new Rapide S also replaces the Rapide model, which has been sent to an early retirement.

The archetype of British design and style pervades the imagination like fine art and sumptuous cuisines. Categorically, the artisans of automotive design and performance are expert judges in matters of taste. In this case, they have chosen an engine devoid of supercharging or turbocharging. Aston Martin says there’s “a purity” about a naturally-aspirated V12 that’s keen to the senses. Additionally, they didn’t want to switch the technological manifesto from the racing platform to the consumer market. Codenamed “AM11,” the 6-liter V12 is instilled with an impressive 550 horsepower (17% more horsepower than the model it replaces) and 457 pound-feet of torque.

The “Touchtronic 2” 6-speed transmission with steering column mounted shift levers has been updated. Though, I prefer shifting from the steering wheel since my reaction time is quicker.

Aesthetically, the silhouette of the Rapide S is wonderfully exquisite. The aluminum body is powerful to the eyes and welcoming. With a new one-piece metal grille, it conjures emotions of fluid passion yet embodies unimaginable power controlled sensibly through Aston Martin’s performance systems. Overall, aluminum and magnesium alloy materials and panels comingle to improve torsional rigidity. Opt for the Carbon Exterior Pack and receive a carbon-fiber front splitter, rear diffuser, mirror caps and rear lamp infills to infuse your Rapide S with sportier characteristics. Since weight distribution can affect performance, the Rapide S has a perfect 50/50 balance and 51/49 when the gas tank is full, with 85% of the vehicle’s mass centered between the two axles. Their engineers dropped the engine bay, which helps define the vehicle’s hood while the lower center of gravity simplifies the weight distribution. To the rear, a spoiler has been embedded into the tailgate for increased downforce. To showcase these dynamics, Aston Martin orchestrated our test evaluation at Atlanta Motorsports Park, especially since it is a very fast and technical track. Les Goble, Head of Aston Martin’s Performance Driving School, was my drive instructor for the day. It was a beautiful scene witnessing a squad of sleek, British sports cars flying down the straights with their engines screaming and exhausts roaring. I must say, the British sure do know how to tune an exhaust system!

The objective of the assessment was to experience the new three-stage Adaptive Damping System (ADS), the balance, and the power of the Rapide S; which can be driven in Normal, Sport, and Track mode with each subsequently increasing vehicle stiffness. ADS reads the vehicle’s throttle and brake position, steering wheel rotation and vehicle speed and helps the driver adjust for better grip depending on what inputs are needed. The 16-turn, 2-mile circuit was flat with high-speed and low-speed bumps and allowed the vehicle to show off its skillsets. The corners come up fast on you, so lots of braking was in order. In Normal mode the Rapide S is set up more for comfort and leans in corners a bit. Of course, this mode is typical for daily driving on public roads. “Sport” tightens all systems while “Track” turns the Rapide S into a true GT. The vehicle sits on a set of staggered Bridgestone Potenza tires with 245/35 ZR20s occupying the front and 295/30 ZR20s in the rear. A plethora of procedural safety systems include Dynamic Stability Control with Track Mode, Anti-lock Braking System, Electronic Brakeforce Distribution, Emergency Brake Assist, and Traction Control. Referencing the grille again, it is designed with a safety mechanism that allows it to fall into the car and crumple upon impact. This reduces the chance of pedestrian injury and meets NHTSA’s new safety standards.

Gently open the soft-touch “Swan” doors to a four-seat (rear is tight, but seats fold flat) environment replete with contrast stitching, plush headlining, and glass transmission selector switches. Insert the glass key into the embedded starter receptacle within the walnut fascia trim and the Rapide comes to life emphatically. The LCD screen rises out of its flush position to display Aston Martin’s new infotainment system which was a must to align them with highly engaging multi-media units from competitors. It features a rear view camera, Bluetooth technology, and iPod connectivity. Another favorite is the 1000-watt Bang & Olufsen BeoSound audio system.

In 1994 Aston Martin sold only 46 cars. Moving ahead, my test vehicle was given a final inspection by an Aston Martin tech whose name is engraved on an engine mounted plate. This dedication to perfection shows that Aston Martin is spearheading a revolution of brave new vehicles that are timeless, powerful and reliable. In other words, the passion for this British marque is almost indefinable.