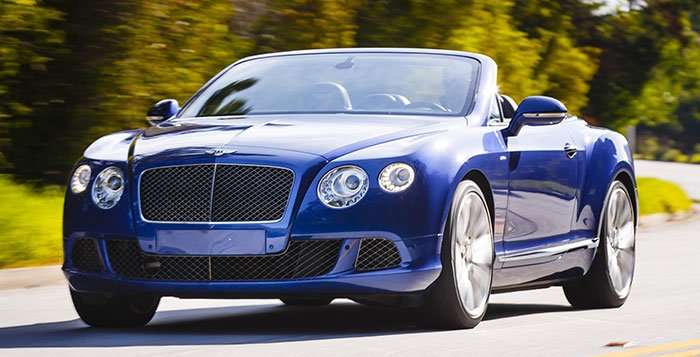 Let’s face it, there aren’t too many luxury convertibles touring the roads that are as majestic as the four-seat convertible from Crewe, United Kingdom. Superior engineering and bespoke craftsmanship defines the vehicle’s impeccable levels of comfort, superior performance echelons and brilliant architecture with elevated sensibility. Bentley’s blueprint for the 2014 Continental GT Speed Convertible was not simply for the faint of heart, their objective, as always, is to infinitely win over the minds of connoisseurs hailing from the luxury elite. Mission accomplished!

The grandeur of the Bentley’s Sequin Blue hue ($4,395) was most captivating with both the black soft-top up or down. When the machine first arrived at my residence in Maryland for a four-day weekend evaluation I simply gazed at its wonderment for fifteen minutes or so. The lines are commanding but eloquent — especially the muscular and athletic wheel arches which flare over the front and rear 21” Speed Alloy, dark tinted rims ($1,635). The opulent 10-spoke spider rims indicate the vehicle’s potential performance parameters by way of Pirelli rubber and enlarged red brake calipers ($1,495). Sneak around back and wide, dual oval Speed exhaust pipes hint at the soon-to-be-heard aggressive voice. Swing around front to the carbon fiber fascia ($5,385) and interpret the large mesh grille and matching lower bumper grilles with motorsports intentions. Still, I studied and waited. I lauded the precision of handcrafted magnificence before igniting the beautiful beast. There was no rush, time sat still!

Since its inception in 1919, Bentley has always been remarkably effective with breaking speed records and winning motorsport races. W.O. Bentley, the mastermind behind the British marque, was astute and utilized profound engineering competence as well as the motoring capabilities of the Bentley Boys, a cadre of skilled drivers, to advance the company beyond typical enthusiast expectations. For instance, Bentley won the 24 Hours of Le Mans in 1924 and consecutively from 1927 to 1930. In fact, they have recently honored their history with Le Mans Limited Edition models and builds an entire line of “Speed” vehicles to continuously show off the company’s panache on and off the circuit. “We’re very proud of our motorsports heritage and excited to celebrate historic wins at Le Mans 24 Hours,” said Christophe Georges, President and COO, Bentley Motors, Inc.

I opened up the elongated doors and seated myself within the finely stitched Cobra-Design Linen interior of our $238,700 ($272,220 tested) vehicle. As Georges would say, “unique, heritage inspired specifications” aptly adorned the cabin. The GT Speed Convertible was applied with the Mulliner Driver Specification which added drilled alloy sports foot pedals, a very tall knurled sports gear lever, jeweled fuel filler cap and quilted, perforated leather hides. At the bottom of the gear shifter you will find damping and suspension settings, which can be adjusted within the 8” Touch Screen infotainment center. Mapping graphics are not as defined as you would expect in a luxury liner of this specification, but it does offer simple techniques such as the speed limit of the particular road or highway you are traveling on. Specific veneers called upon from sustainable forests, hand-stitched premium hides, business savvy infotainment devices and state-of-the-art technological safety and performance amenities allow Bentley to grant their owners the life of a luminary when they take a seat behind the custom crafted steering wheel.

I didn’t drive the vehicle the first day. I parlayed until I felt like its true owner. That could have easily been a doctor or an NBA player. I dressed appropriately for both occasions and received just as much attention from either position. The formula begins with a 6-liter, twin-turbocharged W12 engine with 616-horsepower and 590 lb-ft of torque. The aforementioned programmable air suspension and adjustable springs give the driver the opportunity to manipulate the vehicle’s ride quality to his or her liking. The GT Speed roars with authority once ignited. Please, don’t let its calm demeanor fool you while achieving similar performance numbers form some of your favorite sports cars! Throw the shifter down into sport and it rumbles as if a red flag is about to be waved. An 8-speed ZF transmission can be shifted automatically or manually through the long steering column mounted paddle shifters or by engaging the gear lever to the right in manual. Either way, this posh Bentley convertible and I took on many street demons with ease. When the testosterone was used up I acted like a normal civilian and treated the vehicle to Sunday Brunch with the family. Either style fits well. When you’re done with the sound of the W12 simply cruise at will and adjust the volume to the Naim for Bentley Premium Audio ($7,300), one of the better engineered industry systems. Your favorite tunes will reverberate as if driving through a tunnel with the top down. Actually, I did that!