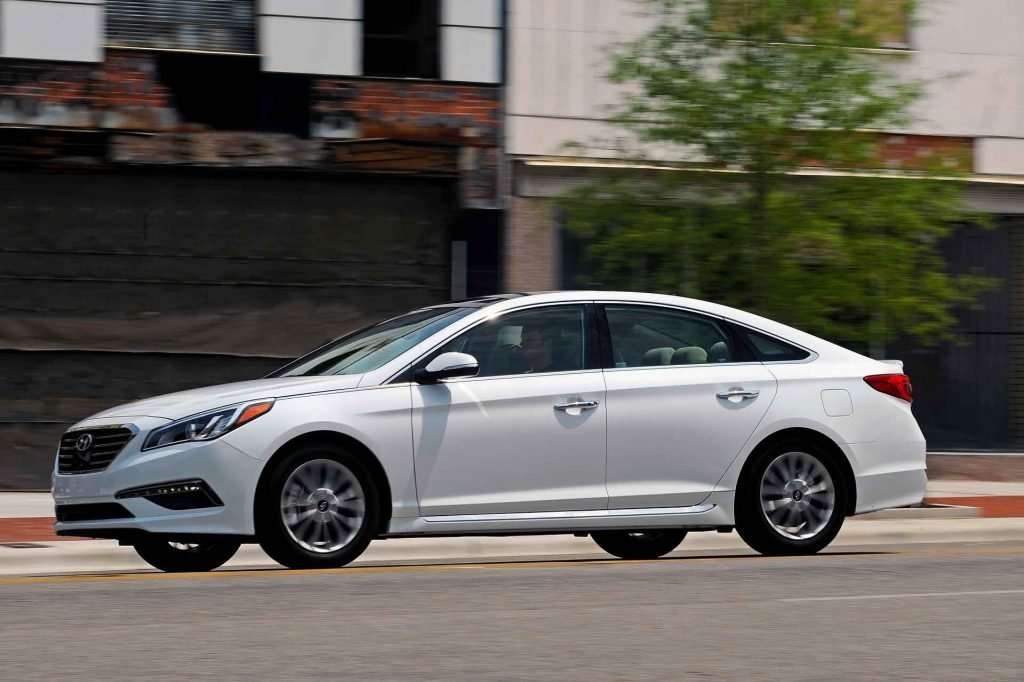 Team Automotive Rhythms visited historic Montgomery, Alabama recently and it wasn’t for a history lesson. Instead, it was due to the release of the 2015 Hyundai Sonata.

I can remember vividly the first Hyundai Excels to hit the shores of the United States back in 1986 and have seen the Korean automaker take that established foothold and carve out a stake in the highly competitive US market. Hyundai has continued to evolve and provide higher quality vehicles while still remaining affordable. Specifically, they differentiated themselves in the mid-size sedan class with the Sonata. Now, with the introduction of the 2015 Sonata, we are exposed to what is described by the design team as “refined basics.” 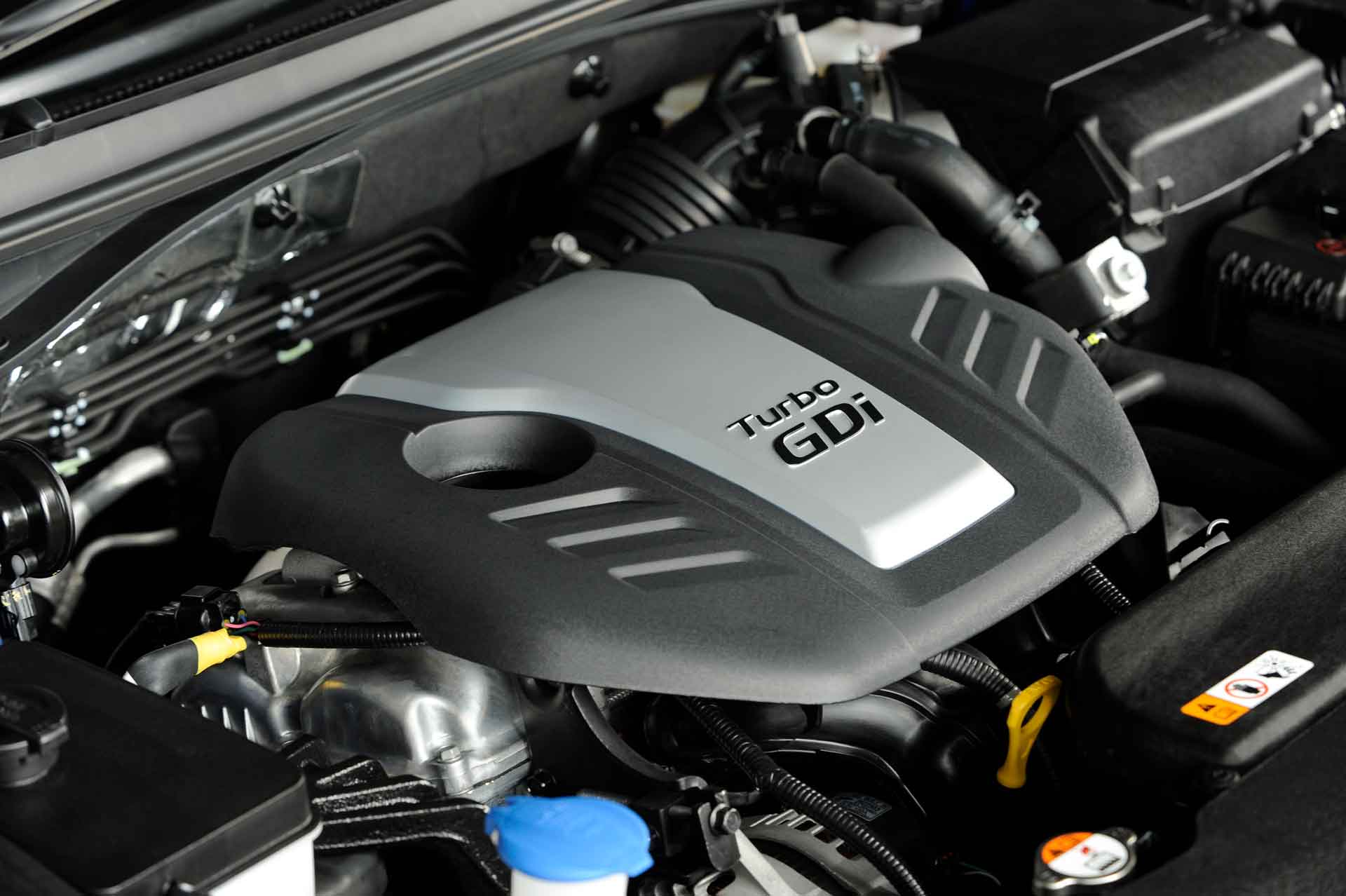 The 2015 Sonata boasts new and more aggressive exterior styling, crisp lines, smooth surfaces, wider front grille, a very coupe-like roofline, and LED daytime running lights which are standard on all 2015 Sonatas, all of which provide a very premium and classy look. The new Sonata is more like its big brother Genesis than any other Sonata we have seen to date, and this was the intent of the Hyundai team. This year Hyundai has decided to do away with the V6 engine for the 2015 model, and instead have chosen the very capable and revised 2.4-liter 4-cylinder engine (185-horsepower and 178 lb. ft. of torque), the 2.0-liter turbocharged 4-cylinder (245 horsepower and 260 lb. ft. of torque), and the ECO model, which will be powered by a 1.6-liter turbocharged 4-cylinder engine. This was no surprise to me and in my opinion stays true to the Hyundai mission to provide quality automobiles with reasonable pricing. Additional interior cabin space and better fuel economy are gained by going with the smaller engines. The 2.4 and 2.0 are both paired with Hyundai’s 6-speed automatic transmission with SHIFTRONIC.

With the latest model Hyundai also wanted to focus on driving performance and safety which is why I was extra attentive to both the Limited and Sport 2.0T models tested.  Amazingly, I was impressed to discover that the new Sonata has many of the same premium features that my high-end personal Cadillac Escalade has. Features like Smart Cruise Control with stop/start capability, Lane Departure Warning, and Blind Spot Detection to name a few. 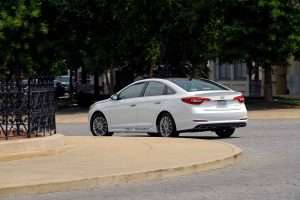 We started the day off behind the wheel of the Sonata Sport 2.0T. As usual, the interior is simple and very ergonomic with shift paddles on the D-shaped steering wheel mimicking the feel of a performance sports sedan. Driver distraction was minimal thus making it very safe to drive. Adjustments to the premium Infinity audio system and the climate controls were effortless as I made my way aggressively along Alabama back roads. The turbocharged I4 was responsive and the Sonata’s all-new and redesigned chassis with its wide wheelbase definitely felt rigid, stable and surefooted on the winding rural roads.  I was able to take in all the scenery thanks to the panoramic sunroof which let a great deal of sunlight into the cabin providing me with some Vitamin D. The brakes were very reassuring. Case-in-point, when dodging the occasional jaywalking squirrel the Sonata Sport slowed and stopped with minimal pedal pressure on my part. The only flaw about the fully loaded Sport version is that many of the materials used to construct the dashboard and door panels are actually not premium. Overall, I was impressed by its styling and performance and agree with Hyundai’s forecast that this will be the most popular rendition of the Sonata.

After driving over a hundred miles in the Sport 2.0T I was given the opportunity to cruise in the Sonata Limited for the return trip. First thing that stood out was the base steering wheel and the lack of paddle shifters. The back hugging sport leather seats were exchanged for more cushy standard leather. While the handling was still tight and solid, the 2.4-liter didn’t seem to have the same responsiveness as the Sport 2.0T. I tried to compensate by switching the drive selector mode to “sport.” While that did tighten the responsiveness of the steering wheel it didn’t give me the acceleration I was looking for and had grown to love in the Sport 2.0T. The limited is not underpowered by any means, it’s just not as performance laden as its sportier line mate. It is a solid mid-size sedan with a relaxed driving demeanor and wood accented interior, which I did prefer to the interior of the Sport 2.0T. 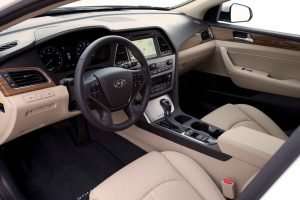 By and large, the 2015 Sonata is another commendable step in Hyundai’s fluidic evolution.  Nothing is more evident than the latest generation of telematics and Apple CarPlay.  For those of you that may not know, CarPlay mirrors your iPhone apps onto the touchscreen navigation screen. Text, phone and apps like Pandora and Spotify are as fully functional as they are on your phone. You can send and receive messages while driving via the in-car speakerphone, cutting down driver distraction. But don’t worry, Android users can expect a version coming soon.

The new Sonata will be offered in various models including the SE, Sport, Limited and Sport 2.0T ranging from just $21,150 to $33,525. “A strong value proposition has always been a cornerstone for Hyundai and the 2015 Sonata continues that tradition, with the base model priced $300 less than the model it replaces,” said Bob Pradzinski, vice president of national sales, Hyundai Motor America. “Our customers are also asking for advanced safety and technology features, so we broadened the 2015 Sonata model line to include more premium comfort and convenience features on the upper trim levels.”

Yep, Hyundai has a new product they can be proud of in the 2015 Sonata.