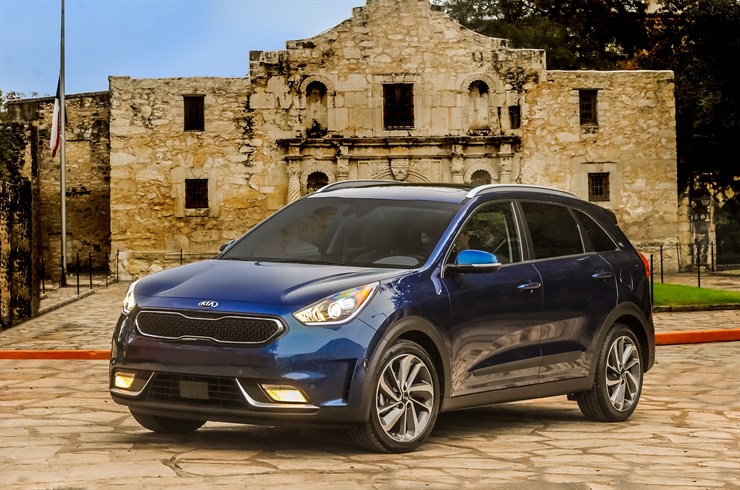 I’m sure by now most of you have seen the Melissa McCarthy ad spot with Kia’s new hybrid crossover dubbed “Hero’s Journey” where the comedic actress attempts to the save the eco-friendly attributes of the planet while using the vehicle’s key features. Whether you find it amusing or not the underlying theme is that Kia has introduced another green machine to the marketplace for individuals looking to reduce their carbon footprint. With an introductory price of $22,890, fuel economy of 52 city MPG, and a 595-mile range the Niro FE may just be my new hybrid hero!

For the national press introduction of the Niro, Kia welcomed Automotive Rhythms to the second most populated city in Texas for a few days of testing, colonial culture experiences, and a bit of sunshine. San Antonio, located in south-central Texas, was ideal for driving as it presented both open and flat roads, highways, and a mix of switchbacks to help us truly understand the dynamics of the small crossover. Texas is also the third largest hybrid market in the U.S. so of course the Niro felt right at home. 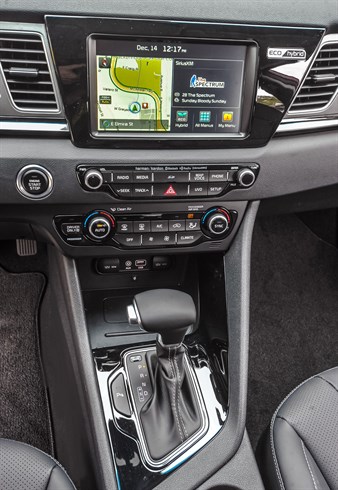 Upon arrival to the epic Hotel Emma where I would lay my head for the next three days I automatically gravitated towards the custom, adventure focused Niro on display with a set of hybrid bikes fixed to the roof rails. Instinctually I ran inside, changed, and came back out for a 5-mile run down the famed River Walk. Next I stopped in Green Vegetarian Cuisine which was just a stone’s throw away from the hotel to refuel with plant foods that grow. As a vegan it only makes sense to treat my body like my hybrid. If I’m going to drive clean why shouldn’t I eat clean which means more greens please. I was also happy to hear that Kia planted a grove of trees in my name in the Blanco River Tree Recovery area in central Texas in conjunction with the U.S. Forest Service.

Kia calls the Niro a smarter kind of crossover, and with 23 years in America they have already sold over 6.6 million vehicles with approximately 647,000 coming in 2016. The Korean automaker also launched four vehicles in 2016 while receiving a number of awards and accolades including Consumer Reports’ 10 Top Picks and JD Powers’ #1 ranking in IQS with an 83 PP100 score. Moving ahead they will debut a cadre of more unique rides by 2020 including the sexy Stinger and an updated Rio. Kia will also increase their average fuel economy by 25% by 2020. To coincide with the product progression a multibillion dollar investment in a newfangled Georgia plant is also forthcoming. This means that Kia will help stabilize the economy with more jobs.

With the Niro representing the first Kia to be engineered from the ground up as a hybrid it offers a great deal of efficiency and power. Behind the wheel the dedicated hybrid platform is solid and accelerates well. I was even surprised at its maneuverability on roads (especially in Sports mode) built for Porsche 911s. And of course for active lifestylers the wide liftgate opening and configurable, folding seats allow passengers the ability to travel with sporting and adventure gear. All five trims — FE, LX, EX, Touring Launch, and Touring — are instilled with Kia’s direct injected 1.6-liter GDI 4-cylinder engine with 104-horsepower and 40% thermal efficiency. The electric motor adds another 43-horsepower but keep in mind the total system output is only 139-horsepower (not 147 horsepower) and 195 lb.-ft. of torque since the units do not run at maximum capacity simultaneously. The Lithium-Ion Polymer Battery is packaged under the rear seat to keep from invading the rear utility room and flat load floor. A 6-speed Dual Clutch Transmission (DCT) pairs with the hybrid to offer flowing power transitions. 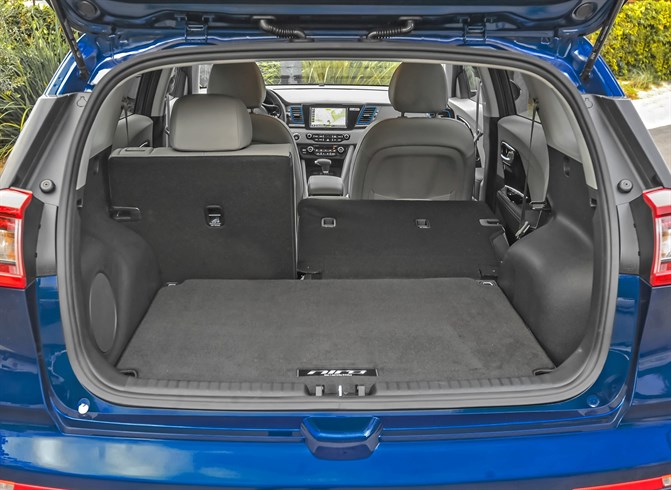 From the outside the Niro resembles a tall wagon in a bubbly shape. I typically like my wagons a bit sinister but since it’s a hybrid I will give the Niro a pass. Kia did affix a tailgate spoiler, tough looking body cladding, roof rails, and an aggressive front fascia. I drove the Touring model which came with snazzy rims tucked in Michelin 225/45 R18 tires. And of course you can add more by upgrading to the various option packages with a small sunroof, HIDs, LEDs, etc. My favorite is the $2,300 Touring Launch Edition with Unique Hyper Gray 18” alloys, Unique Metallic color grille insert, Unique Black colored roof rails, 8” LCD touchscreen navigation display, Harmon Kardon Premium audio system with 8 speakers, an external amplifier and subwoofer, UVO eServices Infotainment System with Android Auto and Apple CarPlay smartphone integration, 10-way Power driver’s seat with lumbar control, and Charcoal cloth and leather seat trim. Naturally, advanced driver systems help turn your hybrid into a smart car with the upgraded Smart Cruise Control, Lane Departure Warning System, Forward Collision Warning System, or Autonomous Emergency Braking. 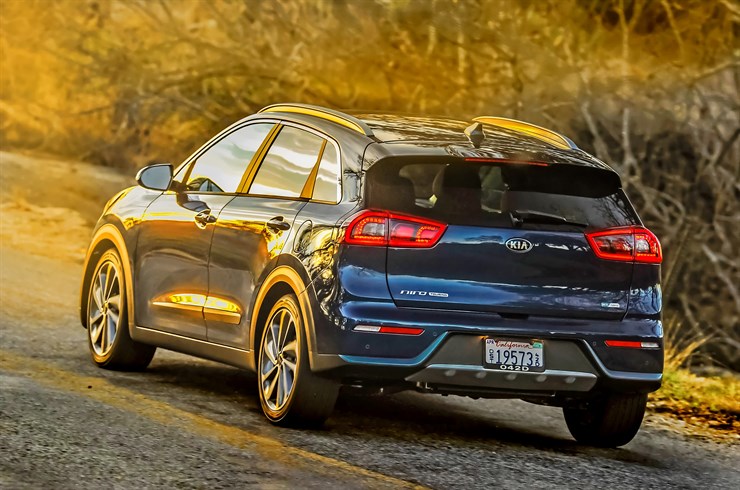 Inside, the Niro’s cabin is reminiscent of typical Kia interiors with a clean, well-placed instrument panel, large touchscreen, logical control placements, and a thick, multifunction steering wheel. The electric blue cross-stitching outlining the vents, steering wheel, and shifter instilled a feeling of serenity. Its seats were a bit stiff and the passenger seat had manual adjustments. But I stayed busy with the infotainment when my drive partner had the wheel. The Harman audio system with Clarify technology to help expand compressed music to its natural state was pretty amazing and the third iteration of Kia’s subscription free UVO  (your voice) does most of the thinking for you. From its subscription-free services like Diagnostics, Geo Fencing, Curfew Limit, and Parking Minder to its suite of apps such as Spotify, UVO is pretty cool.