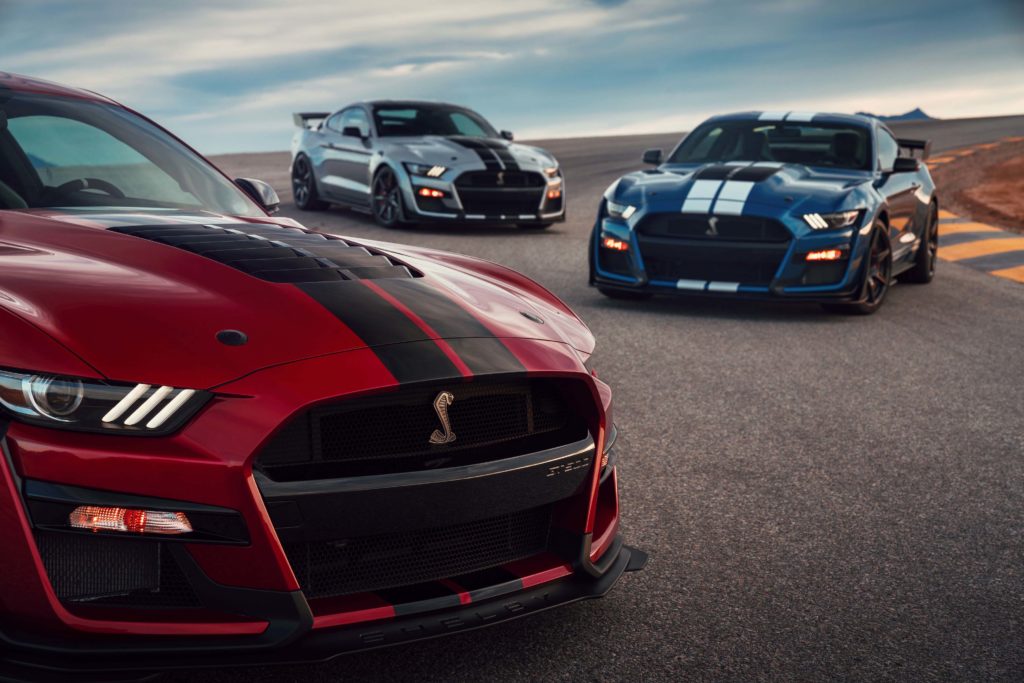 Let’s rock! It was a fantastic day at Las Vegas Motor Speedway for the launch of the breathtaking 2020 Ford Mustang Shelby GT500 and the 760 galloping horses it packs under the hood. The muscle car is smarter, faster, and nastier. With 55 years of Mustang heritage under its belt, Ford set out to build a street-legal “weapon of mass seduction” to represent as the most powerful member of the family. The pony car hits 0-60 mph in 3.3 seconds, ¼ mile in 10.7 seconds, and 0-100-0 in 10.6 seconds. Mission accomplished.

The muscle car from Detroit ignites from a hand-built, supercharged 5.2-liter V8 producing 760-horsepower as mentioned above and 625 incredible ft-lbs of torque. An intelligent engine requires intelligent shifting, so Ford Performance paired the 5.2 with a Tremec TR-9070 DCT 7-speed dual-clutch transmission with normal, weather, sport, drag, and track modes. The symphony of the inverted 2.65-liter Eaton supercharger (with an air-to-water intercooler on top) sounds so glorious when the Shelby GT500 blows by like mammals giving chase. You can clearly distinguish the difference in the technical reverberations of the new Shelby GT500 as opposed to that of aggressive muscle roars. 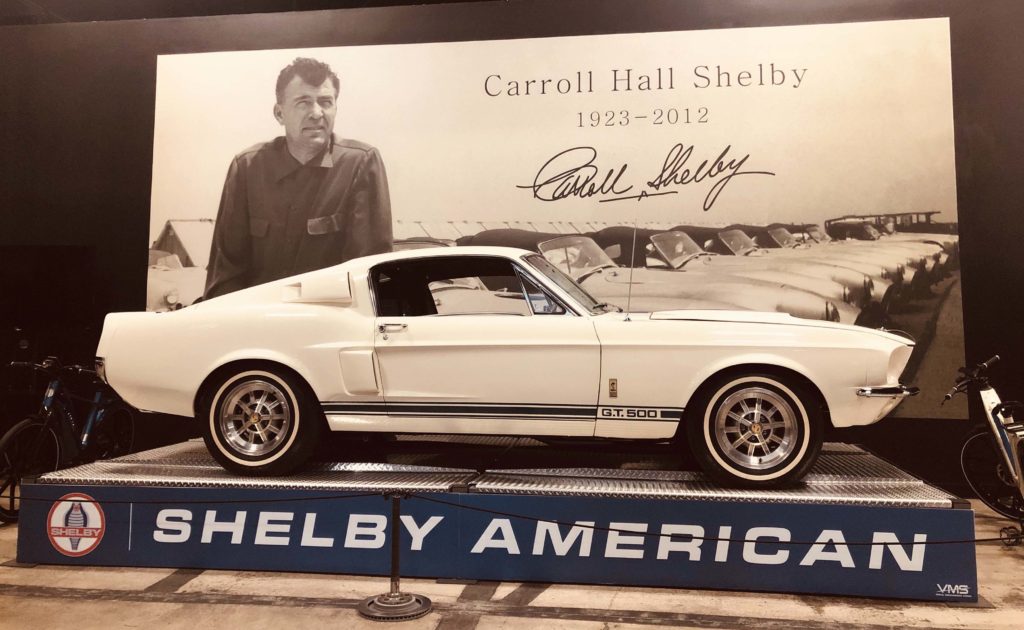 To experience the profound technology and high-performance attributes of the Shelby GT500, Ford invited Automotive Rhythms and other media groups to the Shelby American Heritage Center in Las Vegas for a dinner presentation and tour of the historic landmark. With nine distinct Mustang performance models to represent the bloodline, enthusiasts can see where it began and witness some of Carroll’s collection like the original Mustang of 1964. I was enamored by the distinguished mid-engine Ford GT40 Mark II on display, which immaculately took first, second, and third place over Ferrari in the 1966 24 Hours of Le Mans thanks to a 485-horsepower 7-liter V8 engine and Ken Mile’s excellent driving. Ford would win the next three years of Le Mans before ending the race program.

“With the most Ford Performance racing technology ever in a Mustang, our all-new Shelby GT500 is a supercar takedown machine,” said Jim Farley, Ford president, new business, technology, and strategy. “With its winning combination of American supercharged power and competition-derived hardware and handling, we present the most visceral Mustang yet – a fastback pony car Carroll Shelby would surely be proud to call his own.”

Before hitting the track, I took a 2020 Ford Mustang Shelby GT500 (Chassis L0005) painted in Rapid Red Metallic Tinted out for a drive on the winding roads of Nevada’s epic canyons to become acquainted with the vehicle’s functionality. After an hour or so I noticed that it produced far less road noise than expected. Shifting was quick and engaging using the steering wheel paddle shifters. Look to the left meter to double-check what gear the vehicle is in and rpms. Even in the higher altitude, the engine never held back. The vehicle’s competitive impulses know no bounds. 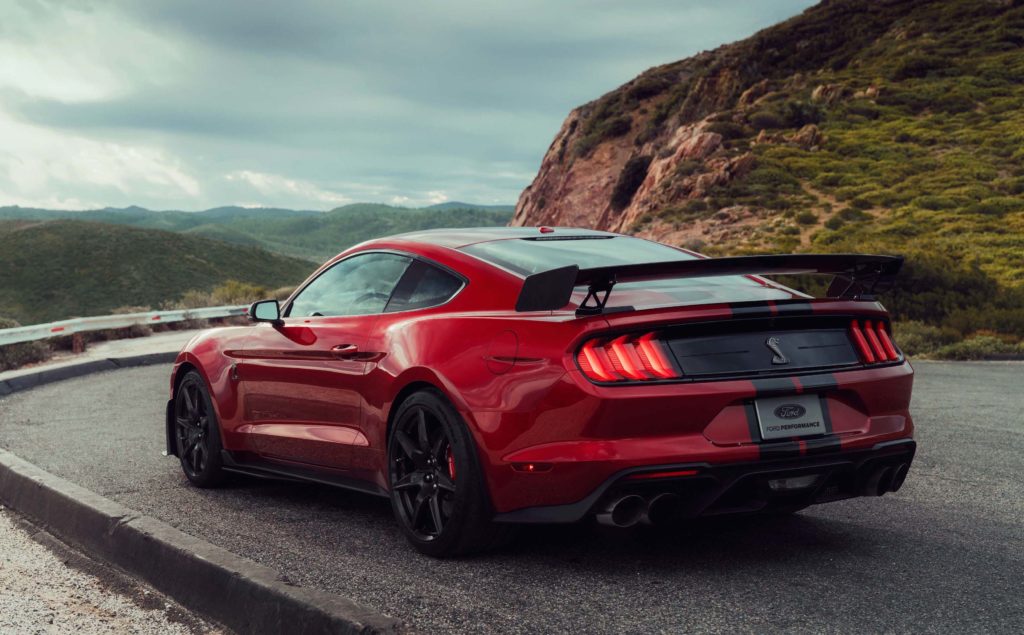 From my back to my hamstrings, the Recaro leather-trimmed racing seats conformed to my body to fit like tailored suits and left no capacity for sliding during abrupt maneuvering. Aside from an Alcantara wrapped steering wheel, the other interior touches are pretty basic, which is common to muscle cars since the focus is on the powertrain, of course. The Mustang features SYNC3 with an 8″ touchscreen, Track Apps, dual-zone climate control, and the GT500 Exclusive Trim Package with carbon fiber outlining. Ford embedded Oil Pressure PSI and Oil Temp gauges over the LCD screen, and under the screen are switches for setting the Mode, Traction, and Exhaust (quiet, normal, sport, and track) to control the sound levels of the quad-tip dual exhausts. But no matter what you set the Shelby GT500 in, once you floor it over 4,000 rpm, the exhaust flap opens, and the Cobra sounds off thunderously. 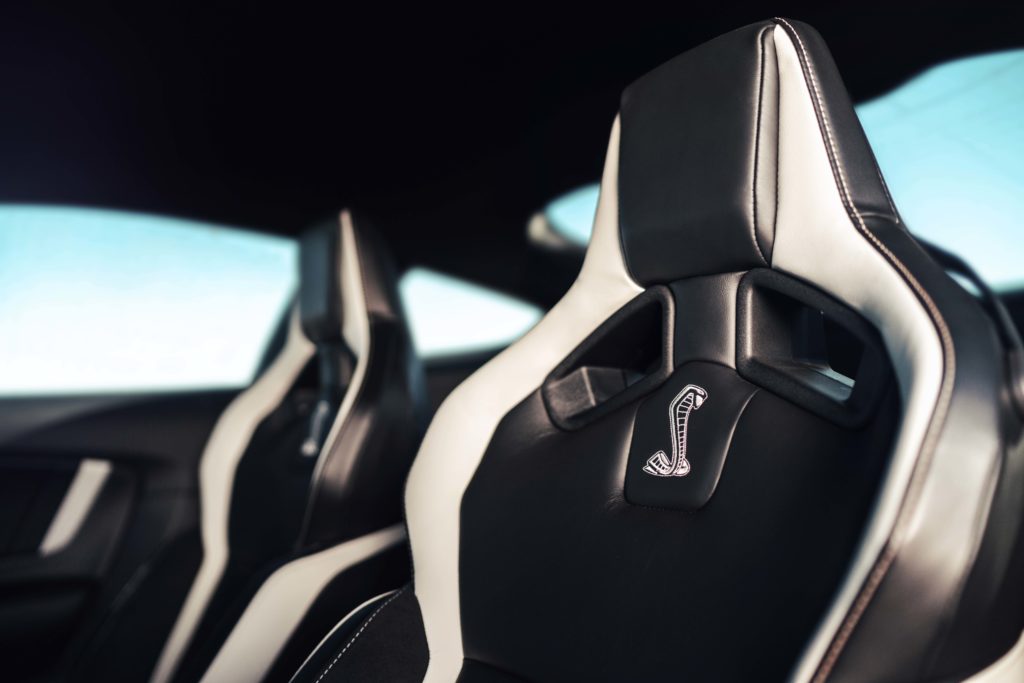 Enhanced with athletic movements and visually styled with an assertive silhouette, the Shelby GT500 is as distinctive and aggressive as Rugby World Cup players. It elicits attention, whether toasting public roads or incinerating dragstrips. The vehicle’s prodigious appetite for power is incredible, yet always under control due to the bevy of advanced electronics that manipulate the power effectively. Flared fenders accommodate 20×11″ five-spoke forged aluminum rims up front and 20×11.5s in the rear. Also available are lightweight seven-spoke exposed carbon fiber wheels in the same size. Michelin provides two different tires specific to the pony car, including either the 295-305/30ZR20 Pilot Sport 4S tires or the all-new 305-315/30ZR20 Pilot Sport Cup 2s, which come with the Carbon Fiber Track Package ($18,500). Michelin engineered the Cups 2s with strategically placed compounds and bespoke tread patterns specific for track days. An adjustable carbon fiber track wing, a set of black vinyl over-the-top stripes, side stripes, a bulged hood with pins and vent, side splitter, front splitter, and a rear diffuser further enhanced my vehicle. 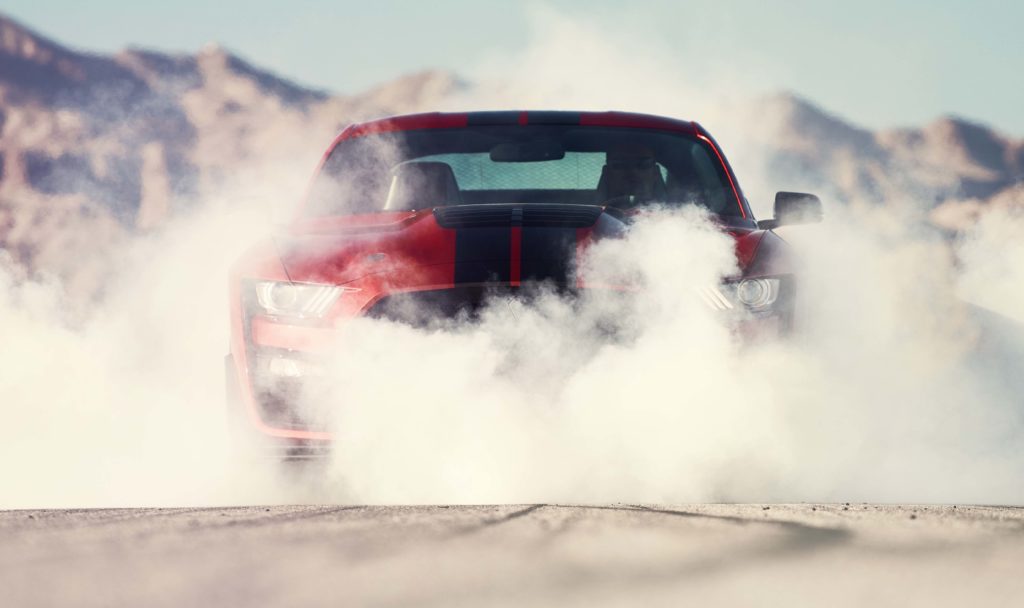 Along with formidable acceleration, Ford Performance emphasized the Shelby GT500’s stopping power. Brembo six-piston fixed calipers and 16.53″ diameter two-piece rotors — the largest ever on a Mustang — halt the front wheels, and the rears receive 14.56″ diameter two-piece, vented rotors and four-piston calipers. The Brembo package, without a doubt, proved worthy during hot laps around the nine-turn, 1.1-mile interior road course at Las Vegas Motor Speedway since some of the turns required 100% braking before entering. “The brakes, with calipers the size of my forearm, bridle all that power,” stated Billy Johnson, Pro Driver.

I also derived satisfaction knowing that the powerful coupe features a sophisticated MagneRide active damping suspension that operates based on the vehicle’s driving mode and administers the best possible traction. So yes, this muscle car is not just a straight-line sprinter. It cuts corners with speed and efficiency like NFL running backs. 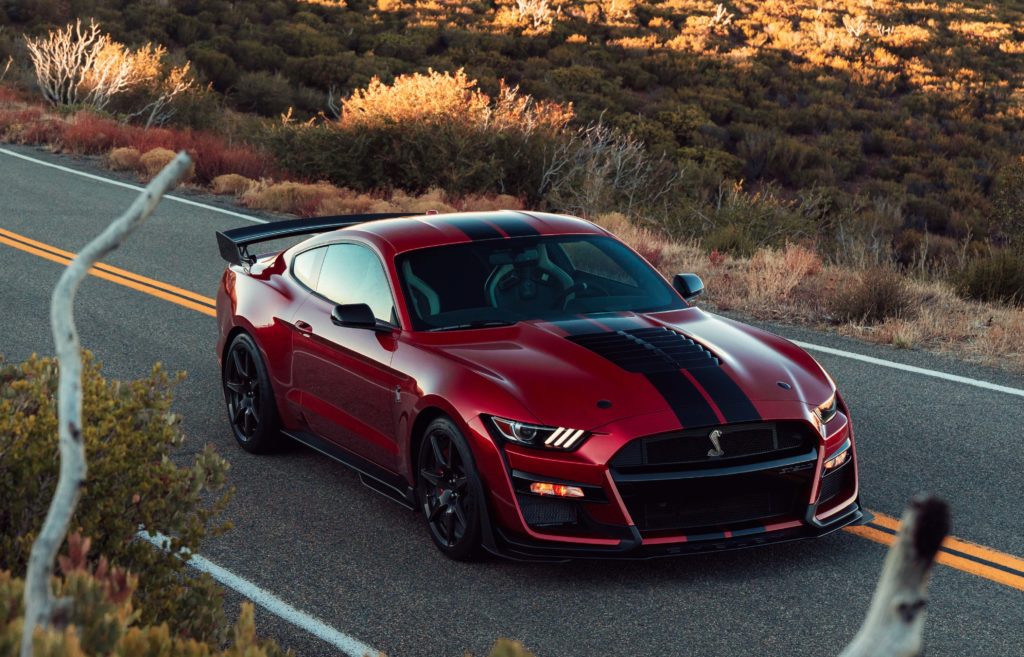 What’s so special about the Shelby GT500 is how docile it can be in typical driving situations and then how monstrous it becomes when you unleash the vehicle’s full potential, such as at the dragstrip. There and through Track Apps, I utilized the Drag Mode, Launch Control, and Line Lock feature, which of course, holds the front wheels to warm up the rear Michelins before your quarter mile. It was rather simple walking the car through the setup stage, and adrenaline-rushing producing smoke screens before each run. In Drag Mode, the Shelby GT500 mostly did all the work without much assistance from me besides clamping down on the brake pedal, gassing it up to 130 mph down the strip, and holding the electric powered steering wheel firm. In this stage, MagneRide softens the rear so weight shifts backward for the takeoff. After reaching higher speeds, the rear suspension becomes firm again.

Yes, the 2020 Ford Mustang Shelby GT500 is provocative and confident on the track and seemingly rebellious at times. But like most horses, you can control it by whispering instructions for day-to-day driving. With a base price of $70,300 ($92,890 as tested) and mileage of 12 city and 18 highway, there are 760 reasons to add this third-generation Shelby to the stable.