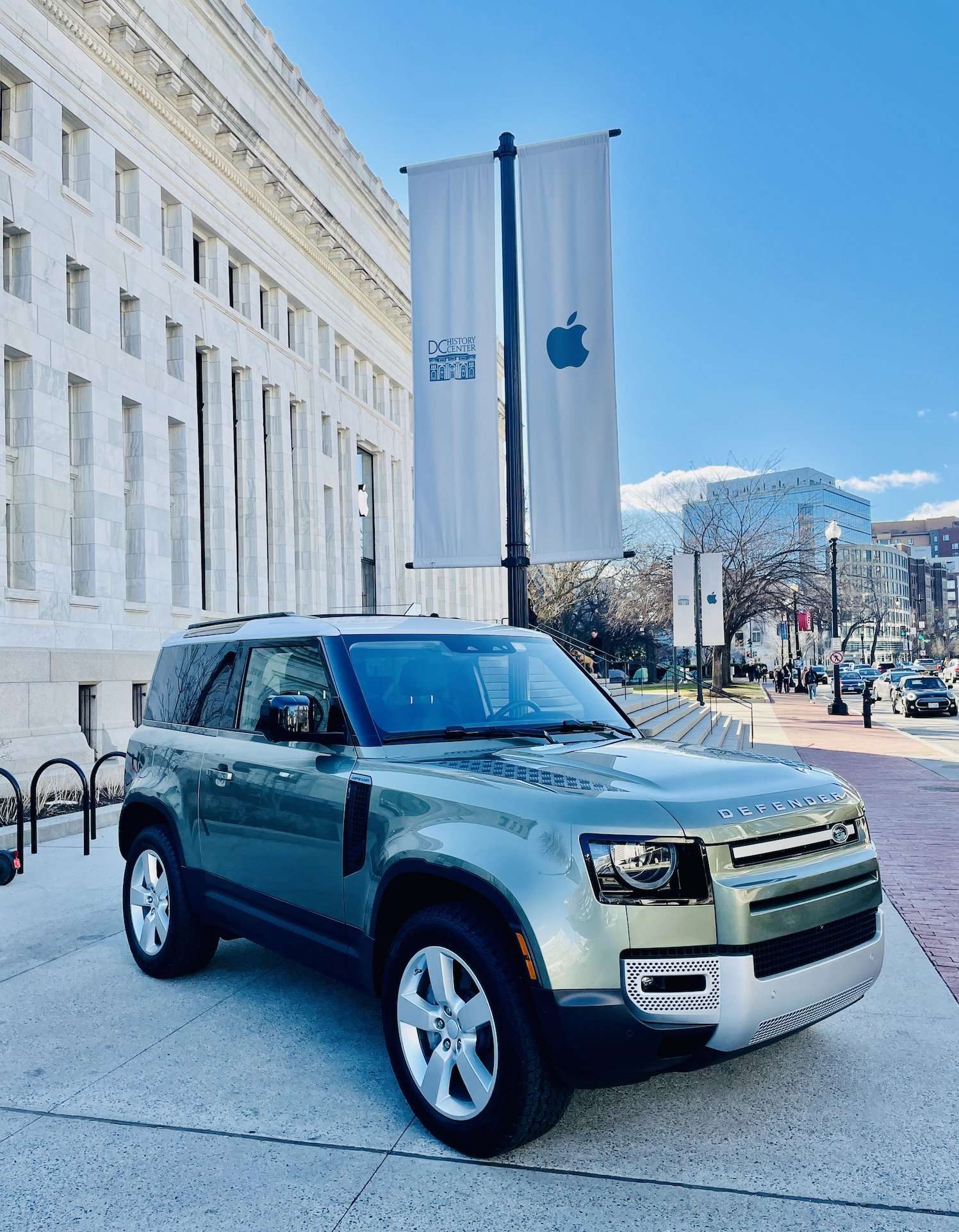 The storied history of the Defender 90 and 110s are pretty compelling. Land Rover enthusiasts may correlate the nameplate with the Land Rover Series I, Series II, and Series III, which began in 1948. Eventually, Series III would transition into the 110 in 1983 and the 90 in 1984. However, in 1990, the official Defender badge would be given to the iconic British utility vehicle. The U.S. welcomed the pair in 1993, but when 1997 rolled around, the Defender was shipping out and sold in other regions until 2016.

When Land Rover decided to reinvent the competent and functional off-roader, excitement stemmed from every spectrum of automotive fandom. I recently spent a week in a Pangea Green Defender 90 First Edition with a contrasting white roof. The compact sport utility vehicle is tough as nails with a stalwart suspension for grinding off-road or defending against the elements when traversing inner cities. The Defender 90 was perfect in performance, agility, and size for parking since I had to transport my daughter back and forth through downtown D.C. for the Capitol Volleyball Classic. However, our family would undoubtedly opt for a longer wheelbase 110 because the 90 — with just two doors — is inconvenient for teenagers. 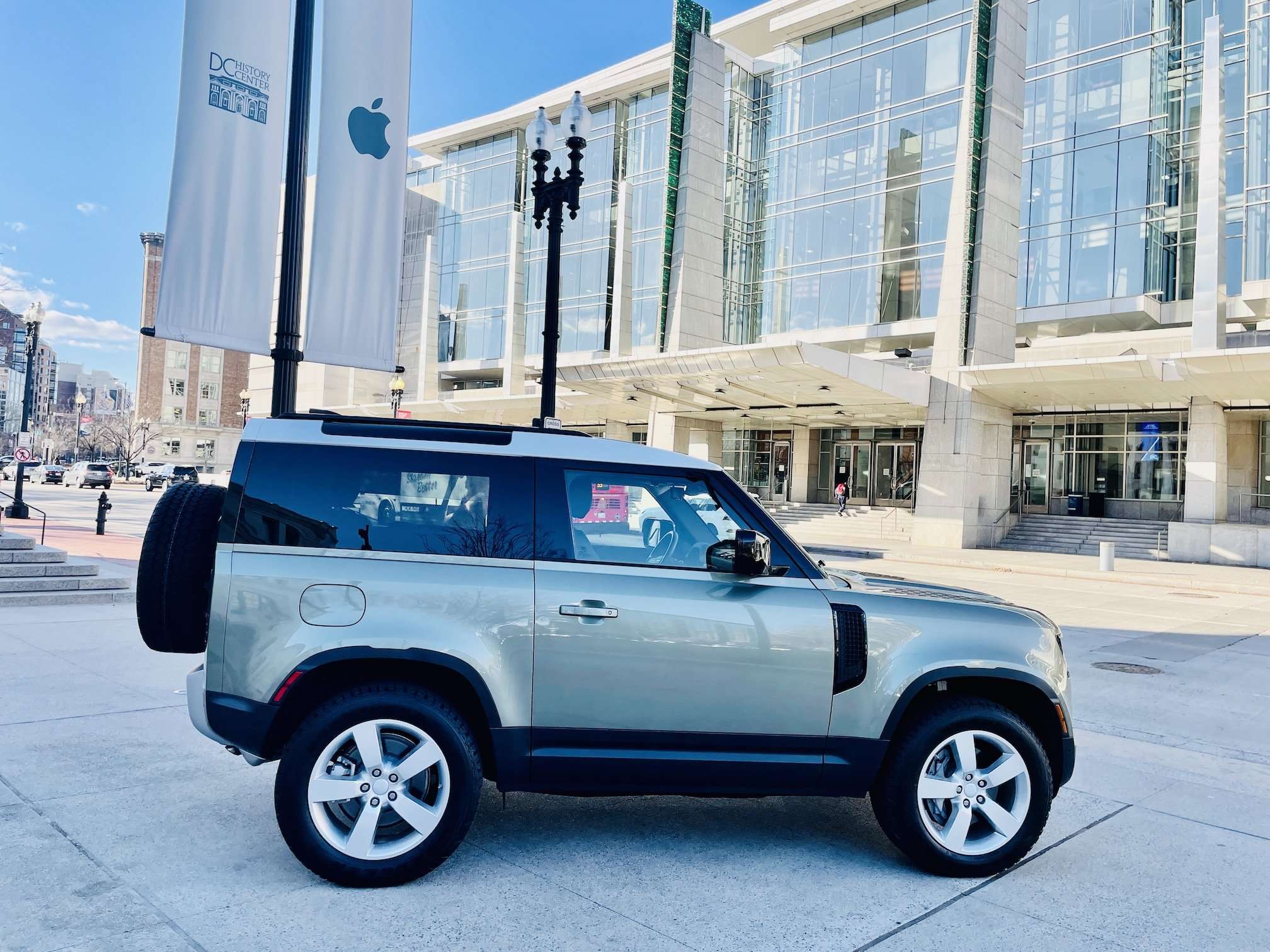 With a curb weight of 4,830 lbs, the Defender 90 is faster than one might imagine as power emanates from a 3-liter, 6-cylinder gasoline engine pushing out 395-horsepower and 406 lb-ft of torque. It’s paired with an 8-speed transmission that shifts through a traditional hand shifter located on the top half of the dash. An air suspension with Adaptive Dynamics, 20″ rims and Goodyear Wrangler all-terrain tires, all-wheel drive, Hill Descent Control, and Terrain Response with selectable modes ascertain that you and the Defender are prepared at all times in any weather or road condition. A full-size spare is hitched to the swinging tailgate, similar to Wranglers. Expect 17 city and 22 highway miles per gallon.

Aesthetically, the Defender 90 looks like something cool your kid would build with 1,200 lego pieces. The imagination of Land Rover designers is otherworldly. Clean, simple, and futuristic is what is revealed from Rover presentations. The Defender’s wheel wells are swollen like rugby players and the chiseled front fascia features a minimalist grille similar to an EV. At the same time, black window frames and grey bumpers provide color balance, and premium circular LED headlights introduce technological flavor to the little SUV. The folding fabric roof and longitudinal glass frames for viewing the sky are sweet touches, but you do hear a bit more than needed from outside. 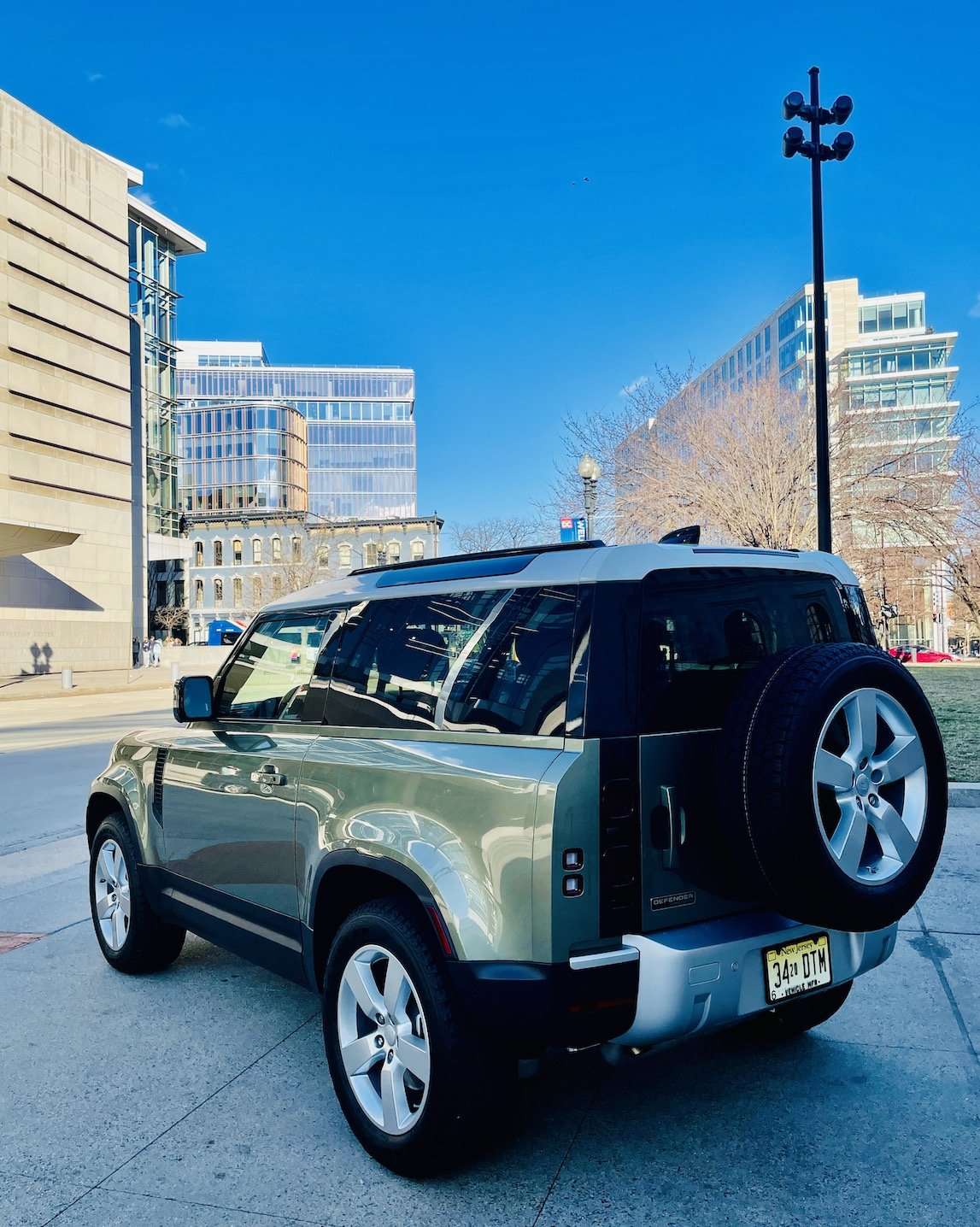 Inside, storage spaces and compartments are omnipresent, as are USB ports for charging. The Defender 90 can hold five or six people, depending on whether you raise the front jump seat. A 10” screen hooks up with a Meridian sound system and either Apple CarPlay or Android Auto. Cabin lighting, 2-zone climate control, power seats and steering wheel, and intelligent safety and security systems add to the vehicle’s amenities. Unfortunately, the second-row seats fold forward but not completely flat, limiting what type of items you can store.

My week in the Defender 90 was fun, engaging, and dynamic. I would compare its capabilities to a Ford Bronco Sport or Jeep Wrangler. And with each brand adding swiss army knife life gadgetry to their road warriors, your decision may come down to pricing, reliability, and euphoric emotions. Expect an MSRP of $64,100. 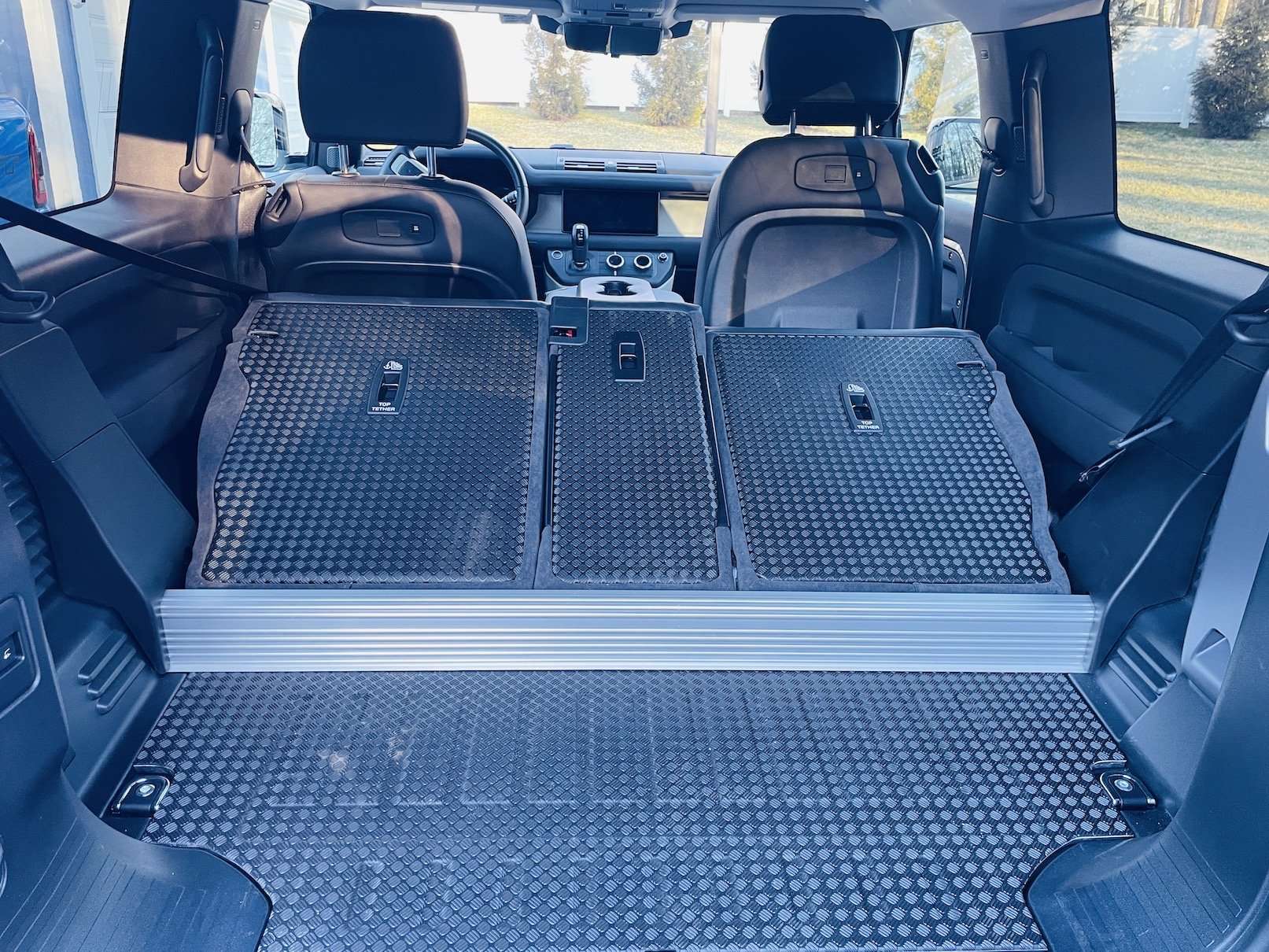 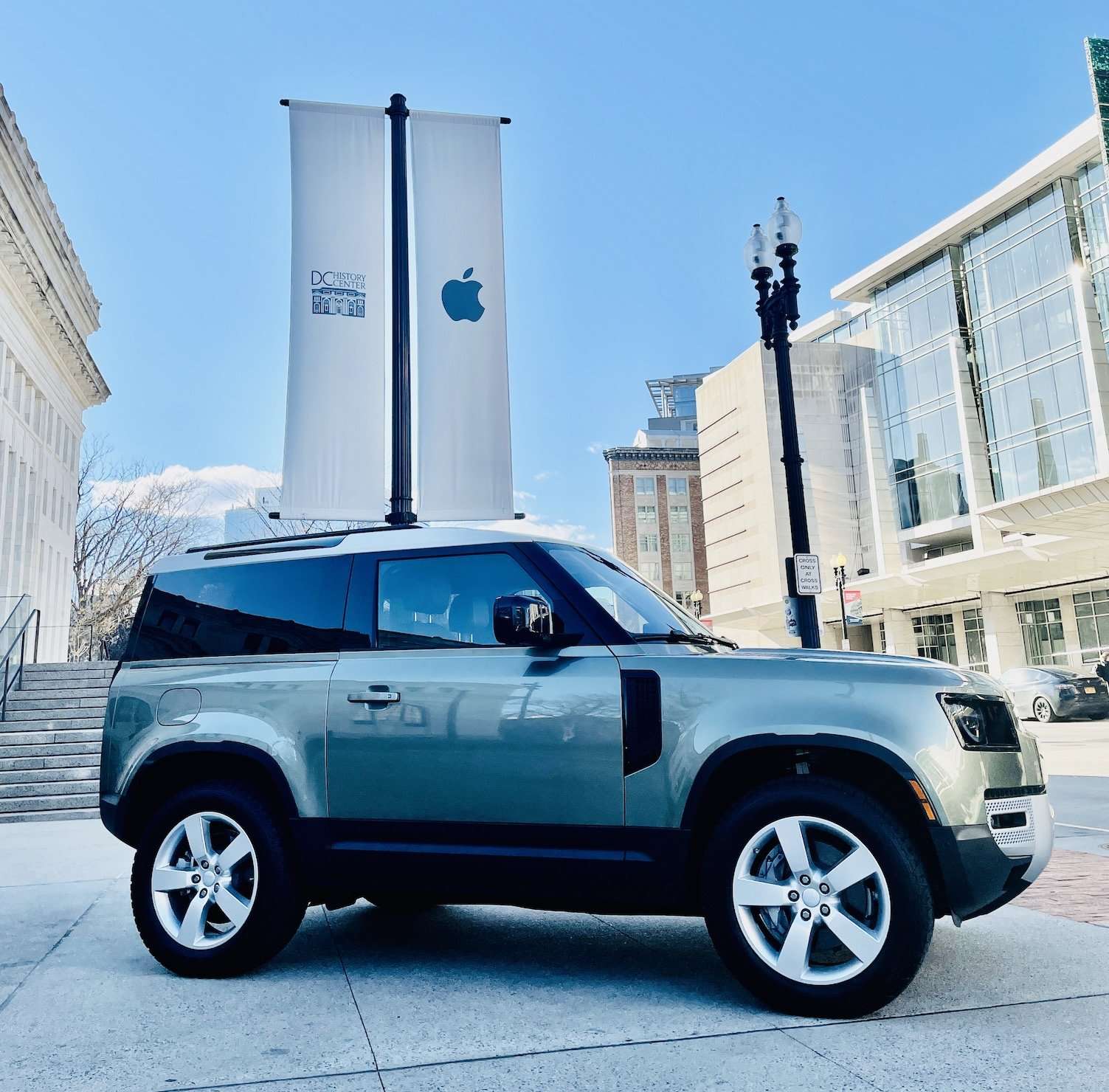